Orlando, Florida — As I sat on the five-hour flight from Los Angeles to Orlando on July 9, headed to the 2016 Sisters of St. Joseph Federation Event, it was impossible not to find my thoughts drifting to the events that happened there June 12. I had watched in horror as the reports of the shooting at Pulse nightclub came streaming in.

Earlier this month, I watched in dismay as reports of the deaths of Alton Sterling, Philando Castile and the five officers from the Dallas Police Department inundated my social media feeds. After careful reflection on that plane, I realized I would arrive at the July 9-12 event confused by these tragic murders and frustrated by the lack of solutions to the enormous issues these murders have shed light on. How could I sit through these liturgies, speakers and conversations and ignore the larger issues waiting on the other side of these convention walls?

From the first second the sisters addressed the group, those concerns were quelled. As we opened the event, which occurs once every five years, staff acknowledged the pain we collectively shared. The federation then released a passionate official statement in response to the Orlando shooting. We watched a video commemorating each victim, and the federation demanded an end to the violence from guns and against the LGBT community. 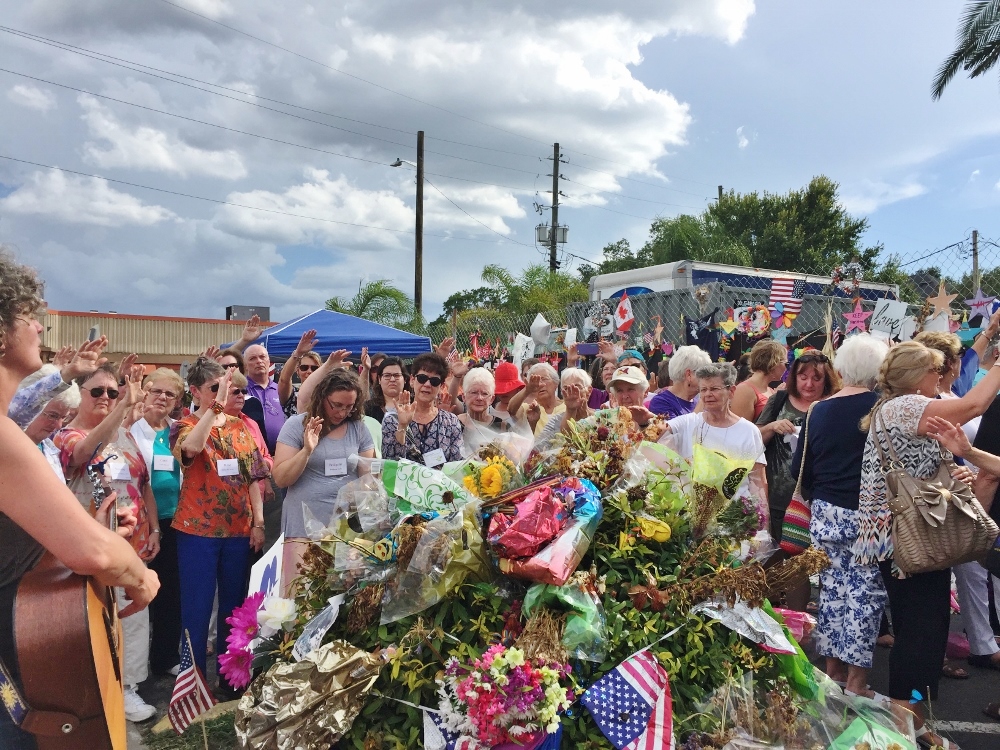 Participants from the Sisters of St. Joseph Federation pray July 11 for the victims of the June 12 Pulse nightclub shooting in Orlando. (Provided by St. Joseph Sr. Judy Molosky)

It was a bold statement that reflected the sorrow many of us wore on our sleeves and on our hearts. And on July 11, a group visited Pulse and offered their love and prayers to the LGBT community. They sang songs of unity and read the names of each victim of the shooting.

If anyone doubts sisters' relevance today, I encourage them to watch the video taken during the vigil at Pulse. Last I checked, more than 25,000 people had watched the video on Facebook, and the response from the community has been overwhelmingly supporting and hopeful.

The opening session set the tone for what was to come. Even though the event's theme, "Our Emerging Story of Being One ... God's Love Unfolding," was chosen years ago, it couldn't have been more appropriate for our time and current events. For me, it was a rallying cry for action and a constant reminder of the work yet to be done in this world.

In a room of approximately 700 people, people from all walks of life joined me in expressing an eagerness to listen to the needs of the people and create change, both within the federation and the world.

For the first time this year, the federation extended an invitation to the event to the women and men who partner in their ministry: associates, agrégées (people who take a noncanoncial, private vow to a congregation to live out their charism), students, St. Joseph Workers, employees and friends. As a former St. Joseph Worker, I was honored to witness their charism on such a grand scale.

What surprised me most was how gracious the sisters were to the younger generations. They engaged us in thought-provoking conversations and made sure that our voices were heard throughout the event. 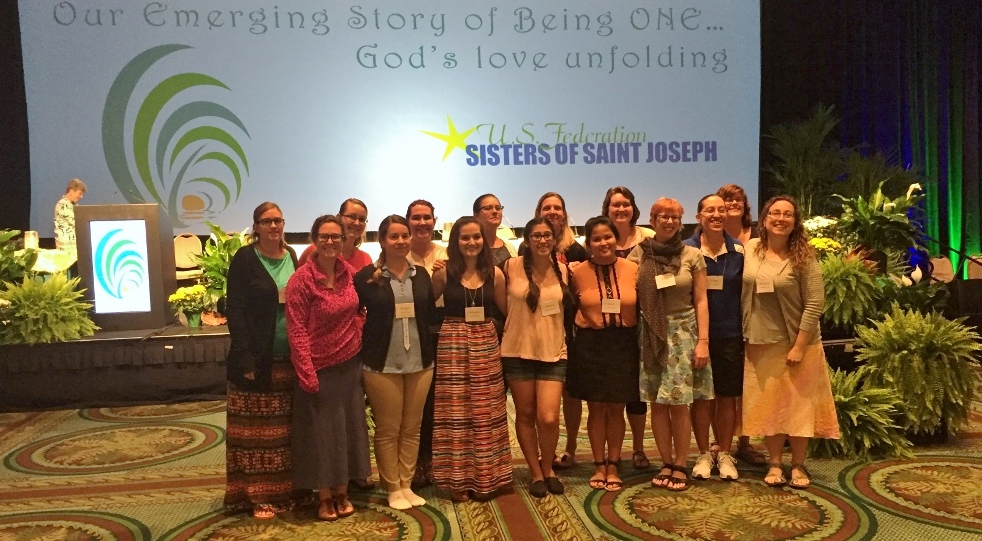 Notre Dame de Namur Sr. Mary Johnson kicked off our morning July 10 by speaking about today's "dear neighbor," a crucial term to the Sisters of St. Joseph. As part of their charism, the sisters serve both God and neighbor without distinction. Johnson asked us to look at our dear neighbors and examine which groups of people have become invisible. St. Joseph Sr. Pat Bergen urged the group to reach out to the margins of our world and offer love and service as a bridge to unity.

Finally, the sisters called us to action through Terry Coonan, a professor of law, criminology and film at Florida State University, and the Coalition of Immokalee Workers. Together they told us about the horrors and human rights violations that many workers from Florida face on a daily basis. I had never thought about the tomatoes on my fast-food burger, let alone the fact that this tomato could be contributing to the modern-day slavery of farmworkers. Many workers need to pick almost 2.5 tons of tomatoes a day to earn close to a minimum wage. The sisters encouraged us to examine our roles in the exploitation of workers by looking into our own consumer habits.

Going into the event, I hoped to sit on the sidelines and listen to those who have poured their lives into addressing difficult topics such as race and privilege. I craved their knowledge. I wanted answers to these questions that I struggled to answer myself. But that's not what I got. The sisters invited me to the event not to be a witness, but to be an active participant.

I listened to the struggles and triumphs of the people at my discussion table. I shared my own, and we supported each other in our challenges. They valued my opinion just as much as that of the sisters sitting next to me. We were all distinctly different, yet we were united in spirit.

It is easy to dwell on our generational differences. Say what you want about the average age of women religious, but it's impossible to argue that they are behind on the times. The event's presenters often touched on subjects straight from the headlines, topics that are relevant and critical to today's culture. They asked prudent questions of the attendees, ones that force me to continually wrack my brain for answers.

There were many incredible, powerful moments throughout the conference. Yet some of the most poignant ones happened during the seemingly mundane: going down the waterslide in the rain with the sisters and postulants. Sharing a hot tub with young sisters who shared their discernment stories. Bringing in the hotel convention center staff to pray over them for their unending help. Staying up with my roommates until all hours of the night discussing race, politics and culture. 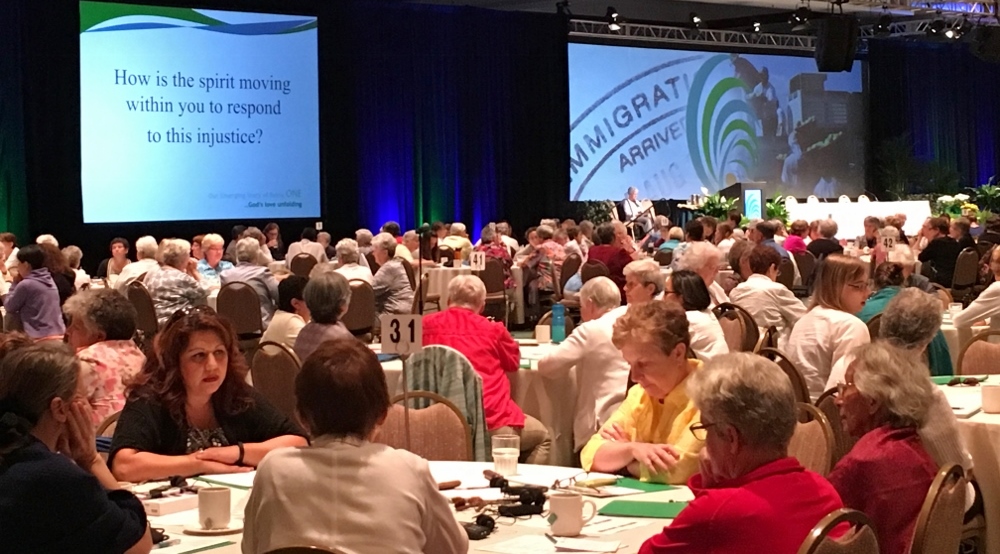 Participants from the Sisters of St. Joseph Federation reflect July 12 on the call to action from the Coalition of Immokalee Workers. (Kristen Whitney Daniels)

One of my favorite moments at the event took place when my fellow St. Joseph Workers from across the United States met for dinner and a sharing of the heart. For those of you who haven't encountered "sharing of the heart," it is a uniquely CSSJ spiritual practice that invites each person in a community to share what is weighing on his or her heart. Despite it being a weekly practice in my St. Joseph Worker community, I couldn't help but be nervous to share my vulnerability with a room of strangers.

But whether it was the breaking of bread (with pizza) or our ability to laugh about our "simple living" techniques, a special bond rapidly formed between us. Words flowed freely. Some shared joy at being reunited with friends/fellow volunteers. Others were thankful to be around those who understood their past as a volunteer, and many talked of the uncertainty they faced in the next steps of their life. We comforted each other, we laughed with each other and even cried with one another. Our only common thread was this volunteer program, yet our connection flowed so much deeper than that. If anything showed me that we are all one, it was the interconnectedness I felt with this group.

Now that the event is over, I'm forced to confront the reality that I will once again be thrust into a world that focuses on chaos, anger and despair. I still can't tell you the secret to world peace or how to put an end to the violence that surrounds us. But if I took anything away from this event, it is that there is true power in loving our neighbors, and I will never have to go it alone.