Why Catholic sisters are good at getting arrested 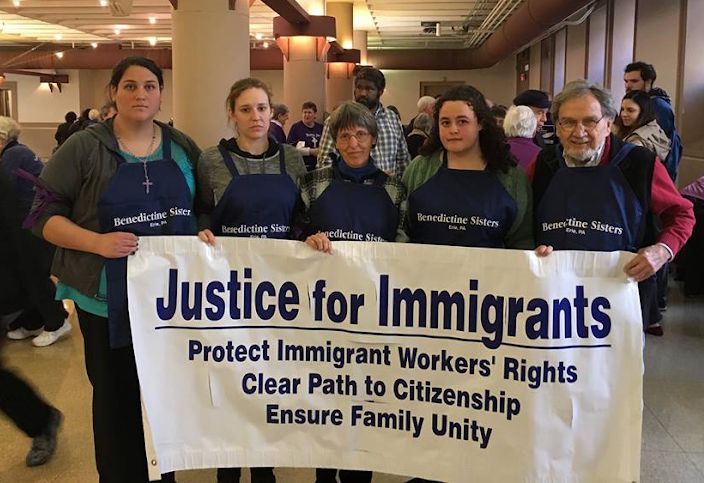 When I first met Benedictine Sr. Anne McCarthy, I should have known we would inevitably be under arrest for nonviolent civil disobedience together.

On the first morning of my summer 2017 internship with Sr. Joan Chittister and the other Benedictine Sisters of Erie, Pennsylvania, Anne poked her head around the corner of my cubicle and asked, "What are you doing at 11 o'clock? Do you want to come protest for immigrant rights?" A kinship was born.

We carried down to a summer festival a speaker and a ton of signs with slogans, including "Benedictines for Peace" and "Jesus was a brown refugee." Day one with the sisters, and I was yelling into a microphone about knowing your rights then scurrying away before anyone at the festival got too mad. My spirit loved it.

Sister Anne will not like that I'm writing about her because she sees nothing special about her justice-centered lifestyle. But it is important that she and sisters like her understand how impactful their example is to young Catholic women.

Sister Anne has shown me I can live a life with no separation between my faith and solidarity with the marginalized, because she does it every day. Her spirit has called my spirit out of itself and right into the hands of God; she will just have to deal with my immense amount of admiration and gratitude.

Sisters are constantly on the front lines of justice issues and are extremely effective in creating systemic change. This is true historically and continues to be true today.

The Benedictine Sisters gave me the courage and the spiritual grounding to live out a faith that does justice. Plus, they provided concrete options for doing so. Because the sisters backed me up emotionally, spiritually and logistically, I had the strength to follow where God was calling me: nonviolent civil disobedience on the Catholic Day of Action for Dreamers, young immigrants who are part of the Deferred Action for Childhood Arrivals program.

On Feb. 27, the day of the protest, Sister Anne, Breanna Mekuly, Jackie Small, Sam Miller, and I took public transit from the Dorothy Day Catholic Worker in Washington, D.C., to St. Peter's Church. Before Mass began, Sister Anne lead us in prayer. She took out a tiny blue bottle of holy water and explained it was from St. Brigid of Kildare and St. Walburga. She passed the bottle around and explained that these saints were healers; like them, we needed to take actions to heal broken legislation for Dreamers. 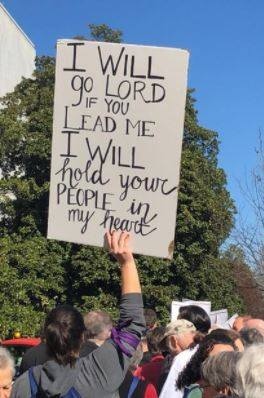 Tinamarie Stoltz holds a sign at a protest. (Katie Brown)

There is no better role model than Sister Anne.

After a press conference and four decades of the rosary, everyone participating in the Catholic Day of Action headed toward the Russell Building, and 40 of us risking arrest — sisters, brothers, priests and laypeople — made our way into the center of the rotunda. Inside, we prayed the last decade of the rosary, led by Maria, a Dreamer. We were arrested singing "Amazing Grace," "Holy Ground" and "Here I Am, Lord."

Here is what I believe the sisters do right (and, honestly, better than anyone else) when it comes to getting arrested and standing up for issues of injustice:

They are grounded in God

The approach to issues of injustice and the motivations behind advocacy are as important as the good fight itself. The sisters approach injustice as women of faith and as peacemakers for Christ and their human family. They are not making money or gaining political points. Their intentions are from God and for God.

This makes an enormous difference in the tone and effectiveness of their actions because they are advocating for values. They do not pretend to be politicians or have a flawless policy strategy. Sisters hold politicians accountable for upholding human dignity and the common good, and they advocate for policies that support Christ-centered values.

A beautiful example of this is Sister Anne and her bottle of holy water. After the prayer for healing, I went into my action of civil disobedience with the mindset of a healer, not a fighter. It is more peaceful and effective to protest like a healer for God's children than a smug crusader.

They live out the power of community

It is easy to become a self-righteous elitist or closed-minded and narrow about a political issue, but not when you have a strong and diverse community holding you in check. The sisters discuss what actions they will take for justice together, especially when it comes to intense actions like civil disobedience. They pray together and think things through.

I'm not saying it is easy for them to decide which actions to take, and I am not trying to promote a flowery picture of what community discussions can be like. However, they do act as one.

I greatly appreciated the spiritual and emotional support from the Benedictine community before, during and after my arrest. In fact, it was crucial for me. The community kept texting us, thanking us for our courage, and sending prayers. As I was standing in the rotunda, about to be arrested, I knew the entire Benedictine community in Erie was with me, which held me together when I saw the zip ties that would be used to bind our wrists.

They are rooted in nonviolence

Personally, I would only partake in nonviolent civil disobedience. Sisters hold the value of peacemaking either in their individual spirits or their order's charism. We started the day by centering our spirits at Mass. No one begins a riot with Mass.

Also, many sisters have received nonviolence training and helped us newbies gain the same skills. The day after our arrest, I wrote an email to the capital police and thanked them for their professionalism, and they responded with a thank you for our peaceful demonstration. Although it was an intense scene, it was not violent in word or in deed. Because we all partook in the action with a peaceful body and heart, the focus stayed on the Dreamers and the Dream Act.

Sister Anne has been under arrest multiple times — all justice related, to my knowledge. She was truly my guiding light through this experience. I prayed not-so-secretly that the police would arrest her first so I could watch and learn how to be under arrest like a woman of God: bravely, confident God was leading me, and in raw solidarity with my brothers and sisters.

I promise, Dad. The sisters are good at getting arrested.

[Tinamarie Stolz was an intern for Sr. Joan Chittister and the other Benedictine Sisters of Erie, Pennsylvania, from May 30 to July 28, 2017.]

Social Justice | Why Catholic sisters are good at getting arrested

Let's synchronize our hearts for inner and world peace