by Dan Stockman
This article appears in the Nepal feature series. View the full series. 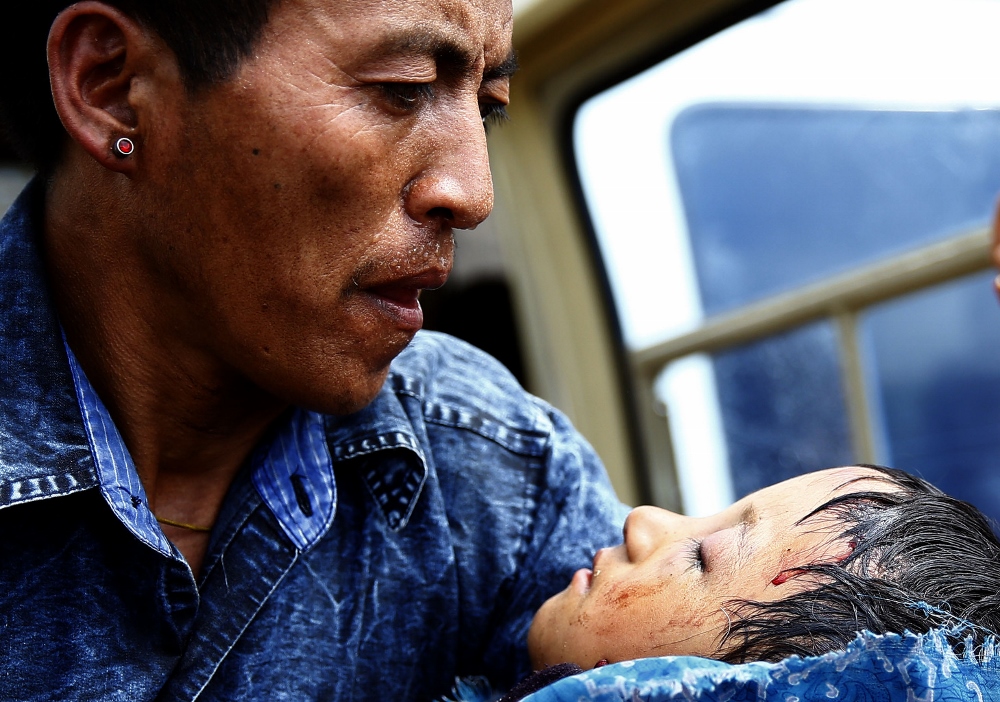 A father holds his injured son after being brought to a hospital April 29 near Kathmandu, Nepal. (CNS photo / Narendra Shrestha, EPA)

When there’s a disaster as terrible as the massive earthquake in Nepal, it’s easy to be overwhelmed with your choices in trying to help. Every agency you’ve heard of – and many you haven’t before – are all rushing aid to the site and all need your donations.

It’s even more overwhelming – and depressing – when you know that not every nonprofit is scrupulous or the best place to give.

Fortunately Public Radio International has listed seven aid organizations that are vetted by Charity Navigator who are helping victims in Nepal, including Catholic Relief Services. Charity Navigator rates nonprofits and is a great resource for checking any agency you’re considering donating to.

CRS officials say they’re concentrating their efforts on the areas outside of Kathmandu:

‘We have all seen images of the damage in Kathmandu’” said Jennifer Hardy, CRS Regional Information Officer who is in Nepal. ‘But we know that there is more unseen devastation in areas further away, many of them inaccessible to this point. Getting these items into the hands of the people of Nepal is the beginning of what will be a long and difficult task of recovery and rebuilding.’

CRS has committed at least $10 million to efforts in Nepal. You can track their efforts on Twitter by following @CatholicRelief.

How remote are the areas devastated by the quake? NPR has the story of a man whose 70-year-old mother suffered a serious head injury in the earthquake, so he carried her on his back for five hours so they could catch a bus for the 12-hour ride to a hospital.

Looking at ourselves first

Though it’s much closer, how to help the situation in Baltimore can be just as vexing. But OnFaith Voices has some advice – almost all of it centered around making your own community a better place to avoid the dehumanizing that created the circumstances there.

It also notes that when examining Baltimore, we also need to examine ourselves.

“Do these things, but first, take a step back from conversations you are watching or those in which you are participating,” Curtis Farr writes. “Notice how in arguing we often seek to relieve our own guilt by pointing fingers and finding escape hatches to a more comfortable conscience. Avoid that.”

When the World Bank and the International Finance Corporation invest in projects that could harm people living nearby, they’re required to resettle them into new homes or help restore their livelihoods.

But they can avoid this, an investigation by the International Consortium of Investigative Journalists has found, by simply not counting the people affected.

Authored by Barry Yeoman, “The Uncounted” details how a massive coal-fired power plant on India’s coast is destroying the way of life for up to 10,000 people who try to eke out a living nearby.

[Note: I’ve known Barry Yeoman for close to 20 years, and in addition to being an amazing writer who champions the powerless, he’s also a good friend. You should follow his work.]

Fishermen say the warm water released by the plant has driven fish away.

“You see this produce here?” says Budha Ismail Jam, sweeping his arm across a view of his bandar, one of several fishing settlements along the gulf. Burlap bags stuffed with dried Bombay duck [a pungent fish] sit on the sand waiting for market. “We used to get this much business in one day. Now it takes 15.”

But to the lenders who made the power plant possible, these people don’t exist.

In some cases, the IFC and the World Bank have declined to count entire populations that claim they’ve been harmed by projects backed by the lenders. In Kenya and Ethiopia, indigenous groups claim that World Bank cash bankrolled mass evictions that targeted them for threats, violence or arbitrary arrests. The World Bank denies its money was used for these evictions.

In other cases, the World Bank has acknowledged that large numbers of people would be harmed by development initiatives, but allowed its borrowers to underestimate the real number.

The World Bank’s own internal reviews show the disparity, the story says, with the number of affected people on average 32 percent higher than what was reported before the projects were approved. But that’s an improvement from a 1994 review that found the real numbers were an average 47 percent higher than estimates.