Living in community proves to be extremely sustaining

by Lauren Magee
This article appears in the Notes from the Field feature series. View the full series. 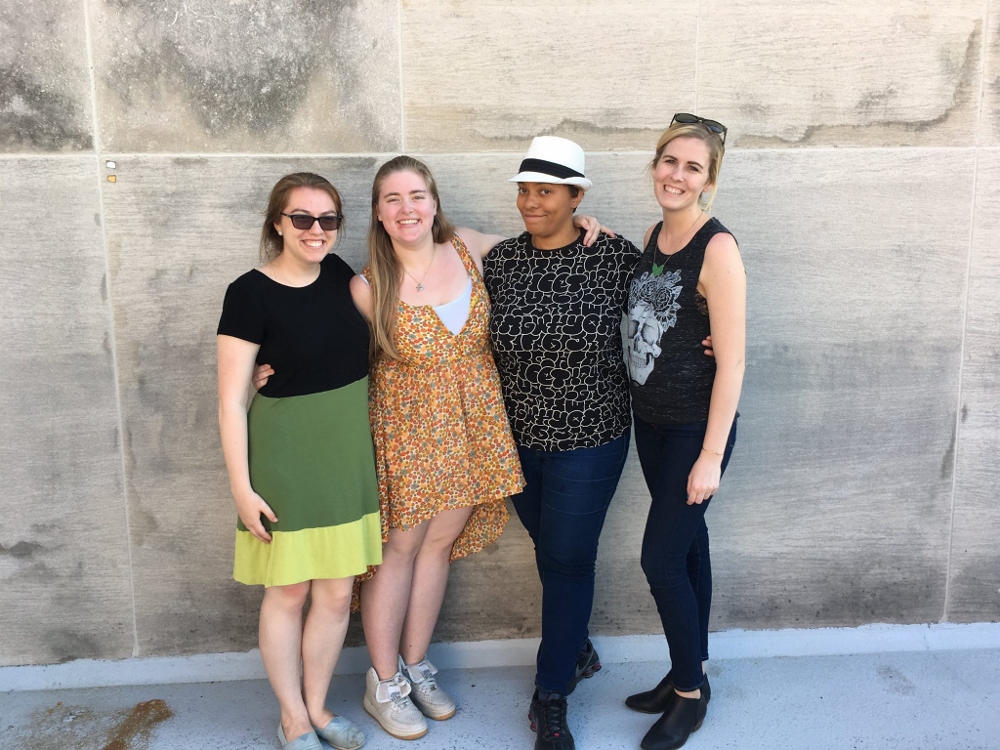 Good Shepherd Volunteers Astoria Community 2015-2016 on their rooftop patio pause for a pose during an alumni potluck. (Provided photo)

Nong Khai, Thailand — Notes from the Field includes reports from young people volunteering in ministries of Catholic sisters. A partnership with Catholic Volunteer Network, the project began in the summer of 2015. This is our fifth round of bloggers: Katie Delaney is a Good Shepherd Volunteer with the Fundación Madre Josefa (Mother Joseph Foundation) in Santiago, Chile, and Lauren Magee is a Good Shepherd Volunteer at Hands of Hope, an income generating project that provides dignified employment for villagers living with HIV/AIDS in Nong Khai, Thailand. This is Lauren's first blog. Read more about her here.

"I'm a reflection of the community." — Tupac Shakur

I don't find the moments in my life to be as significant as the people I share them with.

For the past five years, I've lived in five different intentional communities, and I've begun to identify myself as a "serial community liver." Sisters live most of their lives in community with others, but for the average person, it might seem strange that I keep seeking out these situations.

Communal living starts out a bit awkward: Everyone portrays the best version of themselves. You try to establish yourself within the group but also get a feel for the other members you are living with. I imagine this is the same in any living situation, but what makes "intentional" living so different is the interconnectedness that inevitably results. In all of my communities, we began as strangers but ended as family. That is why it's impossible for me to explain how I ended up serving as a Good Shepherd Volunteer in Nong Khai, Thailand, without mentioning the communities that brought me to this point. 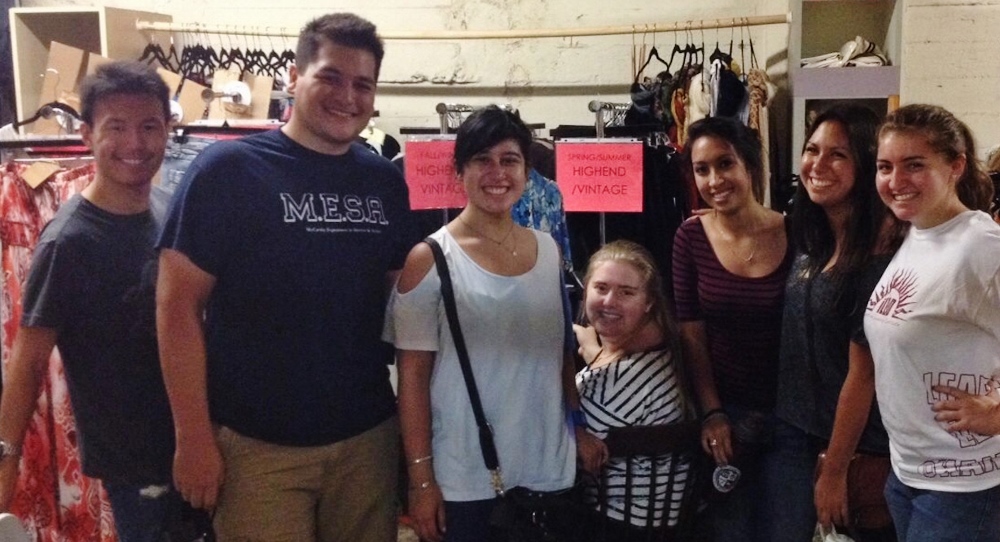 My community posing at the Center for Service and Action House while serving at the Downtown Women's Shelter in Los Angeles during 2014-15 academic year. (Provided photo)

I attended Loyola Marymount University, a Jesuit institution that prides itself on creating "men and women with and for others." Service organizations were prized on campus, and they had a strong presence in the surrounding Los Angeles community.

After a freshman year that was lackluster all around, I decided to live in community for the first time with 28 other sophomores — 12 men and 16 women — who wanted to immerse themselves in the service of others and in education on social justice issues.

We all committed to completing 16 hours of service a month, to doing monthly service projects as a group, and to biweekly meetings addressing relevant social justice topics. But most importantly, we all committed ourselves to one another. We couldn't foresee it, but we would each become broken at some point that year because of our own personal circumstances. And although we would each feel weak, sometimes incapable of moving forward, somehow, we were always able to carry one another.

I went through one of the hardest years of my life, yet as it came to a close, I sat on a couch with my mom and told her I had never felt happier. I learned the value of leaning on others and allowing yourself to be leaned on. During this year, I first heard the term "post-graduate service," and it hung in my mind like a sticky note, refusing to fall.

For the next two years, I would live in a house of seven individuals that championed the same values I live by today: simplicity, spirituality, social justice and community.

My junior year, I found myself alongside likeminded individuals who almost instantly became my best friends. Our bond wound so tightly that all seven of us almost became one entity. While we took on each person's victory as our own celebration, we also took on each person's struggle, which gradually rubbed us all raw. There was beauty in our vulnerability and a security in knowing we were accepted even at our ugliest. I had invested myself in each of my housemates, and I was surprised to find how much I grew simply from supporting them. 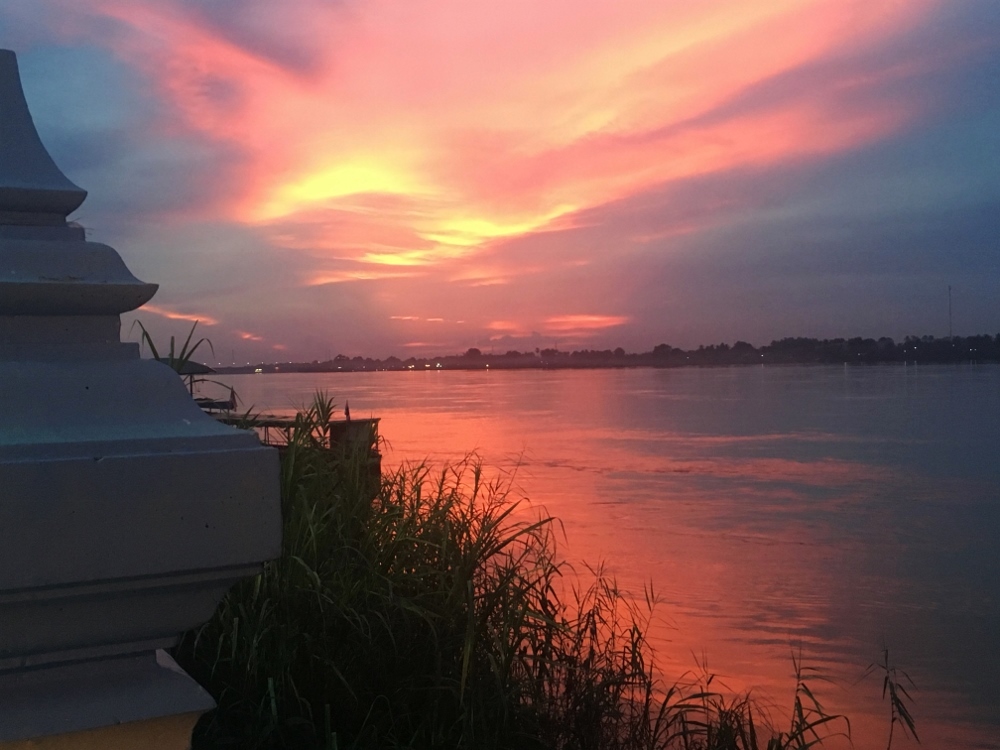 The sunset I saw on the Mekong River while attending the Nongkhai Saturday night market. (Lauren Magee)

I was exhausted as I began my senior year and second year in the house with a completely new set of six individuals. In this year, I learned that not all communities connect instantly, and sometimes, just simple interactions can be difficult. We were all different people, and while this led to fruitful and diverse discussion during meetings, we didn't feel compelled to pursue deep relationships outside of our required activities.

On paper, we were the perfect community: We finished all our service hours, we completed our projects, everyone was present in meetings, and yet we were all just good roommates to one another. I gained a more realistic view of community from this year, one that lowered my expectations for the coming years. Community took work to achieve and maintain, and it took every piece of the puzzle to create the whole picture. I felt at this point that after three years of living in community, I couldn't imagine moving forward without it.

I graduated in 2015 and joined the Good Shepherd Volunteers for a year of service in New York City as a youth development counselor. My youth and co-workers became my extended family, but my three community members sustained me as I witnessed more trauma then I could have anticipated at work.

We were a house of strong, determined women who were unapologetically ourselves. We all knew exactly who we were, and we brought out an infectious confidence in one another. They believed in me when I thought it was foolish to believe in myself. I needed their gentle push to take a leap of faith into my second year of service through Good Shepherd Volunteers in Nong Khai, Thailand.

My road to Nongkhai has been shaky, filled with uncertainty and transition. I often rely on the teachings of my community members and the security of knowing I can reach out to them even with a 15-hour time difference.

There is something addictive about fusing our lives with others and inevitably gaining an indestructible bond. Each one of these communities, and so many more I didn't mention, have had a hand in creating the person I am today. Each has looked very different than the others, but they always seem to be exactly what I need in the moment. 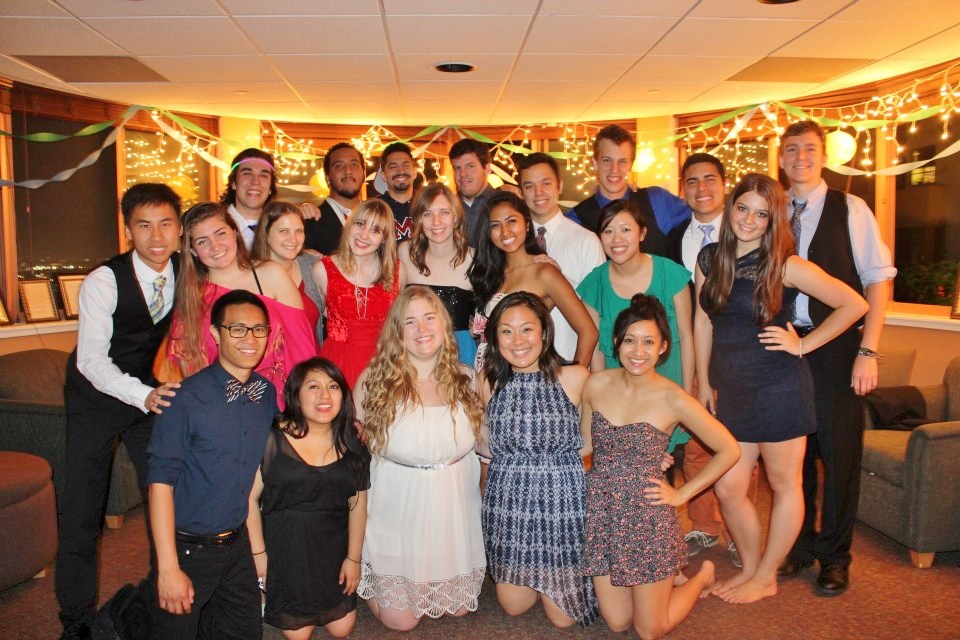 Members of the McCarthy Experience in Service and Action Community 2012-2013 pose for a group photo while celebrating at their end of the year "prom." (Provided photo)

Living in community proves to be extremely sustaining