A few local sisters, a humanitarian photographer and I were crammed in the back seat of a car when Guardian Angel Sr. Carmela Gibaja Izquierdo read aloud a text message she received from her network:

"A migrant caravan from Honduras is expected to reach Guatemala City. Around 1,500 of them total, but the first shift is heading to the Scalabrini Center for Migrants tonight."

Gibaja, coordinator of Red Ramá, the Central American anti-trafficking network for sisters, looked at the photographer and me. "Would you like to go?"

We had been in Guatemala City for minutes at this point, having just left the Mexican border, where we had visited a sister-run migrant shelter. And already, I was seeing firsthand how efficiently sisters networked.

'If you don't try to save yourself, who will?'

Huddled under blankets, the members of the migrant caravan that left Honduras lined a street in Guatemala City, waiting for room at the Scalabrini Center for Migrants, where they planned to eat and sleep that January night. Directly in front of the center was the school belonging to the Daughters of Charity of St. Vincent de Paul, and the sisters took to the streets to offer coffee, a scarf, whatever they could. (When school is not in session, they invite migrants to sleep inside the school.)

It was the first time many of the Honduran migrants who gathered outside the shelter had experienced the cold — then about 12 degrees Celsius (53 degrees Fahrenheit). But as they waited for the center to finish preparing their beds, volunteers tended to their feet, calloused and blistered from the dayslong trek, and the accompanying odor swallowed the street. For those planning on walking to the United States border, they still had about two months to go.

Despite having a few years of experience reporting on Latin America and the ways sisters tend to migrants, on this night, I was like any other American oblivious to the realities of a mass migration, standing amid a never-ending stream of tired faces all coming from the same direction — and with a surprising number of baby strollers in tow.

One 38-year-old woman said the breaking point for her family to leave Honduras was when gangs started recruiting her 12-year-old son at school.

"We had already been thinking about leaving since there was no work for us. But once my son was being targeted to join a gang, the decision to leave got a lot easier," she said. So she and her husband left home with their five children, ranging from 2 to 12 years old.

Many who traveled with the caravan (which they discovered through word of mouth or social media) cited violence and poverty as the main reason for leaving their homes.

"I would have stayed in Honduras if it weren't for the crime, poverty, deaths," one 35-year-old man said. "We are escaping for our lives. And if you don't try to save yourself, who will? Nobody."

Dangers of the journey

Earlier that day, I was in Ixtepec, Mexico, reporting on the Albergue Hermanos en el Camino (Shelter for Brothers on the Road), a pit stop on the Mexico-Guatemala border for Central American migrants heading north. Those with potential to qualify for refugee status can stay months; the rest tend to leave after a few days of recharging.

At the Mexican shelter, just about every story I heard from migrants and the Guardian Angel sisters highlighted the dangers of the journey: kidnapping, extortion, violence, theft and the heightened potential for being trafficked.

"The entire route from here to Mexico is a clandestine cemetery," Gibaja said.

Migrants are "more prone to fall for deceptive offers" and become victims of trafficking, she added, as it's typical for migrants to travel without paperwork, money or even much of a plan on where they're going and what they'll do when they get there.

She said traveling in a caravan can be safer than traveling alone for women, though they're still taken advantage of in group settings.

"It's common for a man to say, 'Here, let me be your protector.' And why do the women let them? They tell me, 'I'd rather have one man rape me than five or eight.' "

Sr. Lidia Cruz, a Daughter of Charity of St. Vincent de Paul, met a 32-year-old woman in the caravan who began crying when Cruz approached her. "She told me about her 6-year-old daughter and how she left her with her own mother so that she could go to the U.S. and make money to send back home."

"I have that woman's face engraved in my memory," Cruz said the next day. "She was scared to go to sleep because she didn't know what could happen to her throughout the night. Even though she was in the middle of a caravan, she was really alone."

"I know she is thinking about her daughter's future, but the greatest gift a mother can give her child is her presence," Cruz added.

On this point, Gibaja agreed. When asked what she thought about parents bringing their kids on the journey, Gibaja said the alternative, to leave them behind, is to contribute to the cycle. "Maybe when they're little, Grandma can control them. But not when they're adolescents."

Adolescents who lack an authority figure at home and have a sense that their mothers abandoned them are easy targets for gang recruitment, she said.

A 32-year-old Honduran father of three told me that "it was either all of us or none of us" when leaving their home country, so he joined the caravan with his wife and kids, ages 6, 4 and 2.

"We're coming from an incredibly dangerous neighborhood, and the truth is I would rather leave than stay and wait for nothing. To stay is an uncertain future," he said. "Of course, there's the fear that we'll arrive there only to be kicked out and left with nothing, but we already have nothing."

"I understand why Americans don't understand us or what we're going through," he added. "The person who doesn't lack anything in their own country — it's easy to look at us and not understand. But we're the ones living it. And the obvious reality is that masses don't just move without a reason. Nobody moves when life is fine."

Though most in the caravan talked about the U.S. with optimism (the brand of "American dream," I came to learn, was still alive and popular, despite these interviews coinciding with family separations at the U.S.-Mexico border), migrating north wasn't their first choice.

"What we want is for the Central American government to take care of its people," said a woman in her late 20s who said poverty and local gang violence compelled her to leave. "I would've rather stayed home, but home no longer felt like an option."

The day after the first members of the caravan arrived in Guatemala City, a second faction made its way to the migrant center, and the block once again slowly filled as the migrants lined the sidewalks. Once again, volunteers tended to the wounded feet, and sisters mingled with families and individuals who welcomed their conversation and blessings.

"It kills me to see them suffer, but sometimes there's only so much you can do to help," said Sr. Elizabeth Rosales, a Daughter of Charity of St. Vincent de Paul. "Right now, though, I can offer my presence and hear their stories, restoring dignity however I can."

Sitting on the sidewalk, a little circle of girls, all younger than 6, shared one plastic doll, alternating who got to play "Mommy." From my vantage point, they were an oasis of normalcy and innocence.

"I remember one small child was showing me how worn his shoes were, but he was happy about it because to him it meant that they were on their way to the U.S.," Rosales said. "To see the expression on his face, the joy he was radiating despite all the suffering, despite his feet being wounded and calloused, he was happy. Because he knows his family is pursuing a better life. I won't forget that."

"I was very moved to hear them talk like that," Cruz said. "Within all their suffering and hardships, they're already thinking about how they can pay good deeds forward and how they can help each other."

The sentiment echoed a phrase the caravan recited earlier in their journey, an experience they recalled to the sisters that January night.

The moment they all crossed the Guatemala border, leaving Honduras behind, the group locked hands and began chanting, "El pueblo unido no será vencido" — the people united will not be defeated. 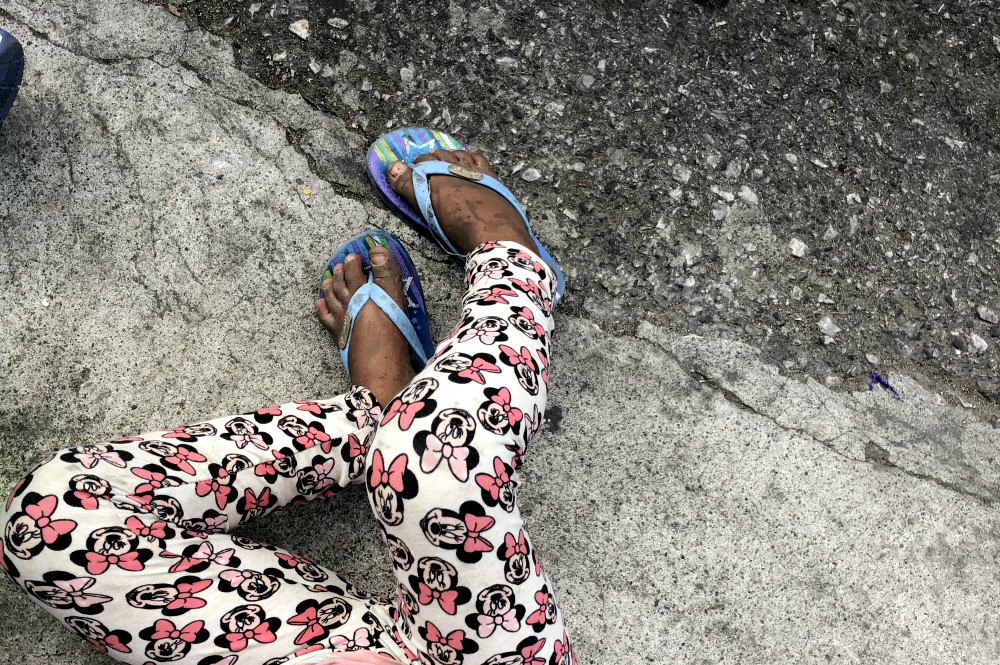 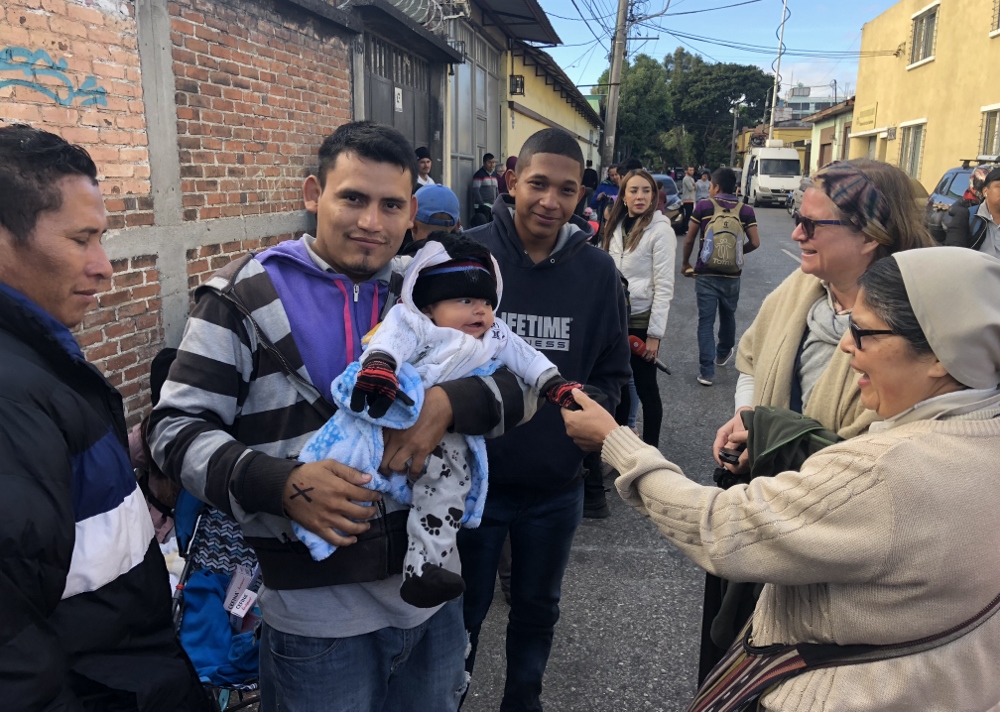 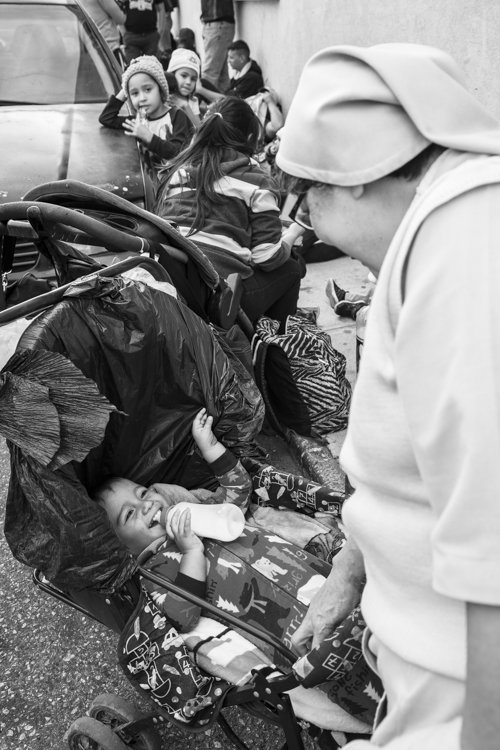 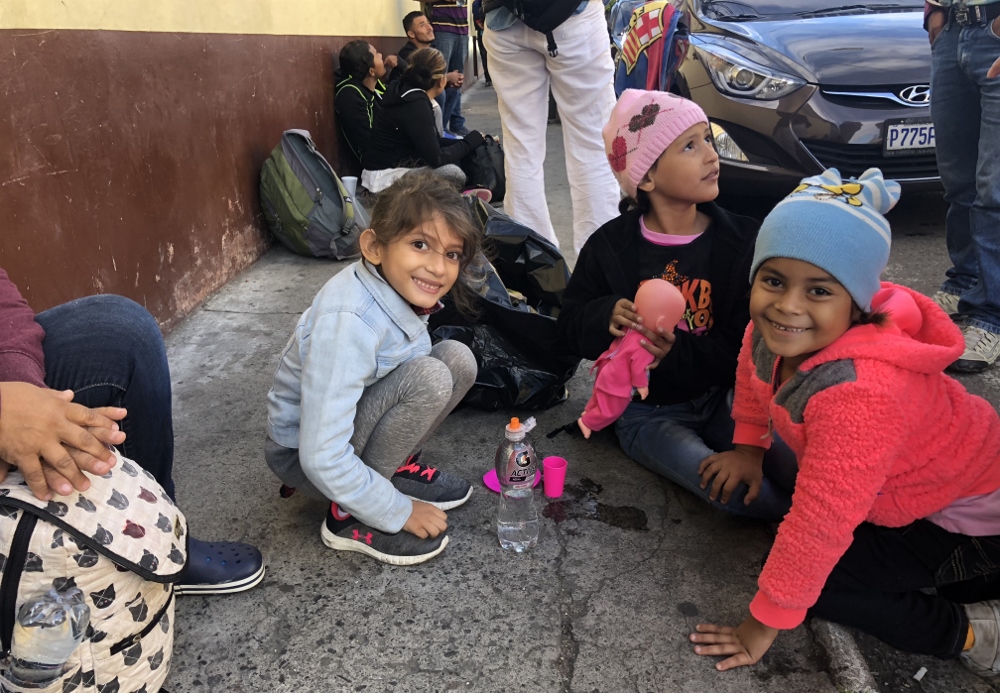 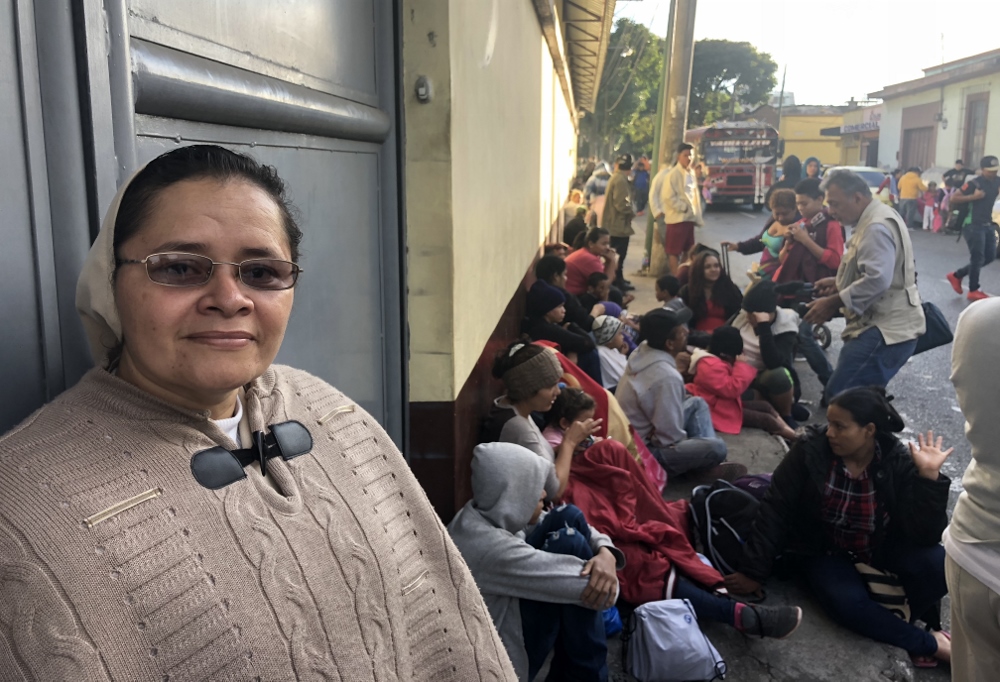