A Christmas prayer against fear

• Download a free copy of our 2018 e-book compiled from our Seeking Refuge series into a single easy-to-read PDF. 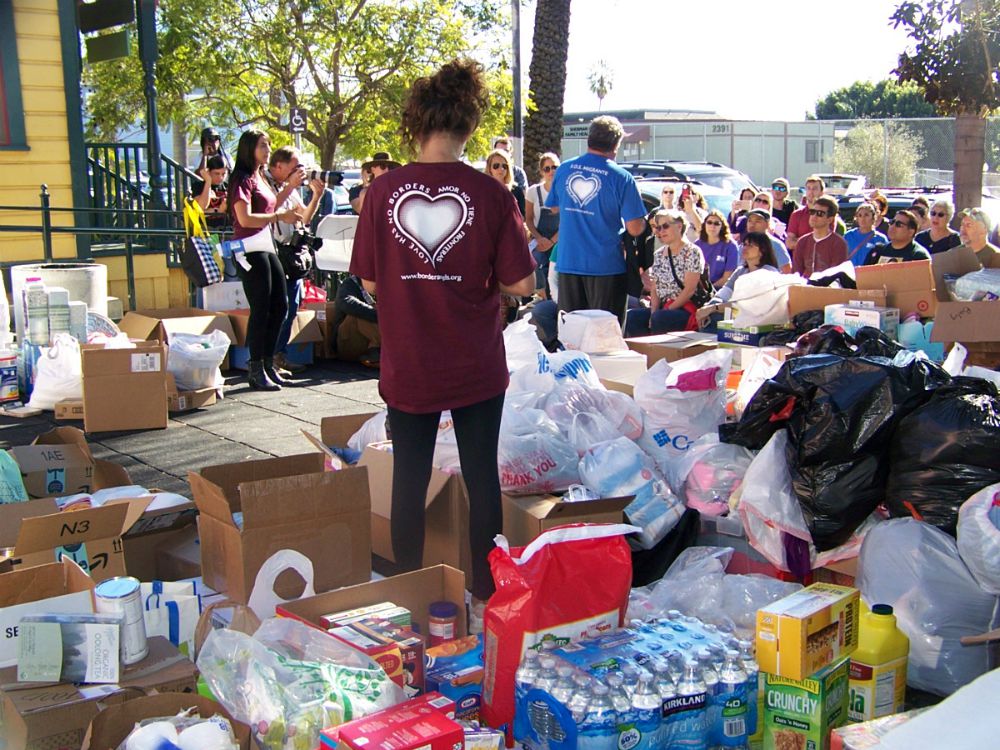 Volunteers in the Caravan of Love prepare Dec. 10 to distribute donated items to asylum seekers in Tijuana waiting to cross the border into the United States. (Courtesy of Rosemary Nicholson)

It is very easy — and natural — at this time of year to focus on the "Peace on Earth, goodwill to men" part of the Christmas story. After all, it is the story of how the Savior brings those gifts and many more to all humankind. But it is also the story of fear: thousands of years of fear of the law, the in the midst of the multitude of times Israel was attacked by its enemies, fear of the Romans occupying Israel at the time of Christ, the fear King Herod had of a new king that could overthrow him, and the fear of the Holy Family fleeing Herod's murderous intent. All of those fears were assuaged by the life of Christ.

Today, there are millions of people in fear on our own southern border — fears that can be relieved by the hands and feet of Christ: Us.

The School Sisters of Notre Dame's Atlantic-Midwest Province spent most of December urging believers to pray the novena of Las Posadas Navideñas, a Mexican religious tradition commemorating Mary and Joseph's journey to Bethlehem. The novena runs Dec. 16 through Dec. 24, but there is a prayer each of the nine days that should remain with us not just during the Christmas season but all year:

Who will listen to the cries of the poor —

To the hopes and needs of those seeking a better life?

Who will listen if we don't?

Who will speak so their voices will be heard —

So the wisdom and aspirations of migrant peoples will be heeded?

Who will speak if we don't?

Who will see Christ in our brothers and sisters — in those who reveal new and unique aspects of God's love as they seek to make a home with us?

Who will see Christ if we don't?

Who will be the hands and feet of Christ — the hands that heal and nurture, and the feet that "bring good news?"

Who will be Love if we aren't?

The prayer reminds me of a quote by civil rights leader and Congressman John Lewis that has become a sort of mantra for me: "If not us, then who? If not now, then when?"

By all means, celebrate the many incredible gifts God has given us. And then let us all resolve to give those same gifts to others, especially those so desperately in need of them.

Religious of Jesus and Mary Sr. Rosemary Nicholson wrote about activities around the "Love Knows No Borders" demonstration Dec. 10 at the border south of San Diego, which was organized by the American Friends Service Committee, a Quaker group, and included religious leaders from across the faith spectrum for the event. At least 30 were arrested during the protest, which was meant to oppose the militarization of the border and the proposed border wall, and to highlight the plight of the thousands fleeing violence in Central America to seek asylum in the United States.

Nicholson took part in the "Caravan of Love," which dozens of volunteers delivered donated items to asylum seekers at five sites in Tijuana:

We were one of 43 cars in this "caravan" leaving from the Border Angels office in Barrio Logan, San Diego, and heading to five sites in Tijuana where the migrants are sheltered. Cars were packed with donations of items urgently needed. A large group with some health professionals from Colorado went to the new shelter seven miles from the Otay border crossing, a replacement shelter for the people when they left the Tijuana Sports Arena. Another group went to the Sports Arena to bring food and clothing to the few remaining migrants.

The remaining groups traveled to the Border Angels Shelter on the beach next to the border wall in Tijuana. There we met some Honduran migrants who helped unload and repack items going to another shelter. One told us of his long journey, much of which was by foot. Now he was so happy to be at this shelter and hoping to get his papers in order. At the Border Angels' shelter, living space, food, donation room and immigration lawyers are provided for the needs of the migrants. It has a lovely view of the Pacific Ocean and the United States on the other side of the border wall.

The group then proceeded to two other shelters in Tijuana to bring the remaining donated items. God bless so many people who donated all the items we delivered! God bless each of the migrants on their continued journey of hope and new life.

Migration | A Christmas prayer against fear