by Joyce Meyer
Ministry
Environment
This article appears in the Homelessness and Sustainable Development Goal 14: Life Below Water feature series. 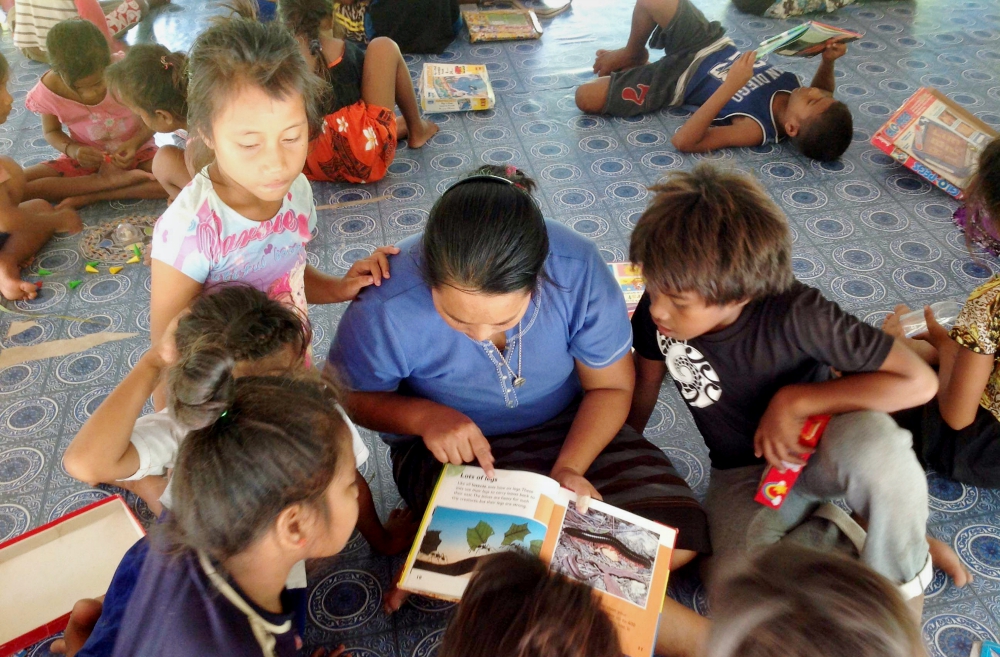 "Leave no one behind" is the mantra for the U.N. sustainable development goals for 2030. This past July, attending the U.N. High-Level Political Forum, I heard country after country proudly tell stories of how they are implementing these goals. However, pride shifted to defensiveness when representatives from nongovernmental organizations asked how indigenous communities are benefiting. These are usually those that lack good water, gender equity, care for those with disabilities, help with climate change, and human rights. Recognizing those left behind is not always easy. Vision can be clouded by our assumptions.

As I listened, I recognized my own assumptions last year when I visited the South Pacific. I know so little about this part of our world, so was surprised to learn what a long history the Catholic Church has in the Central Pacific island nation of Kiribati. I was also saddened to learn about the dramatic threat of its extinction due to climate change.

Catholicism, the largest faith community in Kiribati, was brought by Sacred Heart Missionary priests from France in 1887. A decade later, the Daughters of Our Lady of the Sacred Heart followed, bravely sailing from France on an old, rundown ship; the shipping company feared losing better ones to the coral reef of the region.

The sisters had few comforts in their new life but remained intrepid in the middle of stark poverty, heat and disease. They opened a school for girls and thrived as young women joined them. They were the lone group of sisters until 1950 when Bishop Octave-Marie Terrienne started a new community of indigenous sisters, the Sisters of St. Therese, that eventually merged with the Daughters in 1968.

Another group of sisters did not arrive in Kiribati until 1991, when Bishop Paul Eusebius Mea Kaiuea invited the Good Samaritan Sisters from Australia to minister there.

I was fortunate to read in a recent Good Samaritan newsletter, The Good Oil, about two Kiribati women, Kawi Arebonto and Tenta Maritino, who made their first vows in the congregation last year, joining three others. I was excited when they agreed to be interviewed about their experience of religious life in an international congregation and also to learn how they see climate change impacting the future of their island country.

Because of limited internet connections between islands and challenges with English, the sisters asked for help from Brenda Keenan, an Australian lay volunteer and consultant in education in the country. Kiribati comprises three island groups, Phoenix, Line and Gilbert, which consist of 33 islands, all but one of them coral atolls (ring-shaped coral reefs, each with a lagoon in the center and featuring the tip of an undersea volcano). Twenty-one islands support the population of around 110,000.

"Land is the exception rather than the rule in Kiribati," Keenan explains. "Although comprising only 312.9 square miles in land area, its 33 [islands] span 1.35 million square miles of ocean and have an east-west distance approximating New York to Los Angeles (2,404 miles). The highest point above sea level is about 7-9 feet. The atolls are extremely flat and low-lying."

She also noted that the sisters' first language is I-Kiribati, a language of only 13 sounds; "ti" is pronounced "s," thus Kiribati is pronounced Kiribas. 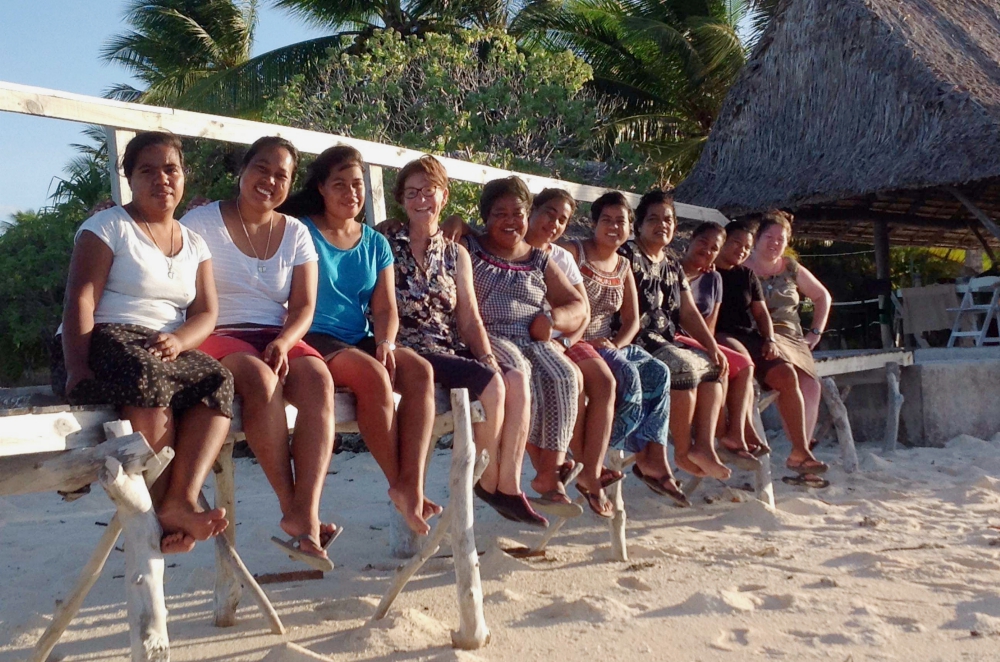 My first question to the sisters was to ask them to share their experience of the impact of climate change in their island communities. Both expressed gratitude that their congregation is committed to ecological justice where they learned about the issues of climate change and now recognize it happening before their very eyes.

They see collapsing sea walls, stronger storms and flooding in some places but decreasing rainfall in others, increasing temperatures, and stunted plant growth and even loss of species. As the sea rises and erodes the beautiful beaches, they hear of family wells getting dirty and contaminated by seawater.

Sister Tenta reported that one family she knows well has moved five times since 1987 as the sea encroached upon their land. They fear that soon they will have no place to go and are eager to help build seawalls and plant mangroves to keep the sea contained. I cannot imagine what it must feel like to know that my country is disappearing.

This family is one of few who are keenly aware of the changes taking place — too many of their neighbors still claim climate change is imaginary, frequently making jokes about it. But they are grateful to the government for purchasing land in the Fiji islands, just in case it is true!

The sisters are also concerned about the extensive of use of plastics on the islands and ignorance about the importance of recycling and repurposing. Much education is needed to help islanders realize the consequences of their choices and these two participate in this as much as possible.

Island life on atolls sounded idyllic to me, but I learned this is far from reality. The people are vulnerable in many ways, besides the impact of climate change. Colonialism is still present as China makes inroads and international companies take resources and leave behind little benefit.

Daily life is simple but not always convenient. Canoe, boat, ship or plane are the primary modes of transportation, and given the sea mass, it can take many hours to get from place to place. On land, walking is most common but some use small cars, trucks, motorbikes and bicycles.

How do people make a living in this kind of environment? A limited few are hired as government workers, teachers, retail and restaurant owners, and sailors, but the majority engages in cottage industries, subsistence fishing, small farming, and collecting and selling copra (coconut flesh processed for oil). Life is generally lived in villages and focused on family. 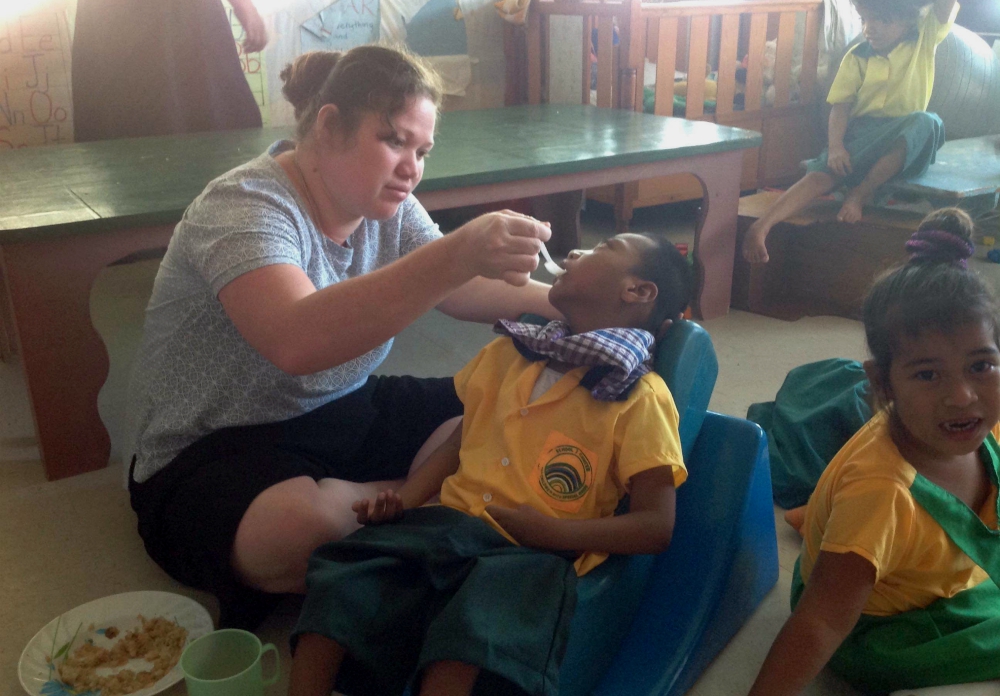 Sister Kawi was born in Nonouti, an outer island about 12 hours by boat to South Tarawa, capital of Kiribati, where she and her family lived while she completed secondary school. Nonouti is very hot, as it sits just south of the equator, and has a population of about 2,600.

Families throughout the atolls tend to have five or more children and Kawi's family followed this tradition. Her father, who died in 2013, was a teacher and her mother supplemented his salary as a dressmaker, supporting four girls and five boys. Three of her siblings are some of the few who have paid employment and the others are farmers and fishers, enjoying a diet of fish, pork, breadfruit, coconut and toddy (coconut sap).

Sister Tenta grew up in the town of Bikenibeu on Tarawa, the most-populated atoll of Kiribati. She lived with her parents, three brothers, three sisters and extended family. Her parents are deceased, but her father was a carpenter and her mother took care of the home.

Both Kawi and Tenta exuded love of island history and the culture of strong family ties, song, dance, hospitality and generosity.

When asked what attracted them to religious life, both women enthusiastically noted it was the witness of the sisters' prayer life. They added, too, that ministries of pastoral work, care of elders and care of children in schools, kindergartens and centers for children with physical and mental disabilities sparked desire in them to be of service to others.

Kawi said that the desire to be a sister was with her for many years. She was 24 years old before deciding to join while attending a diocesan pastoral institute studying theology and Scripture. Tenta attended the same institute and was attracted to the joy sisters displayed in living in community.

Attraction is important, but adjustment to a whole different way of life is challenging. I was curious about how their families accepted their choice and also what adjustments had to be made coming from such close-knit family settings. Both sisters reported that their families were happy with their choice of religious life.

As expected, adjustments were challenging. Intercultural living in community was stretching because of the great diversity of backgrounds and cultures ranging from I-Matang (Australians) to the women from different islands. "We have different likes and dislikes and different points of view," Sister Kawi says. And learning English is another challenge. 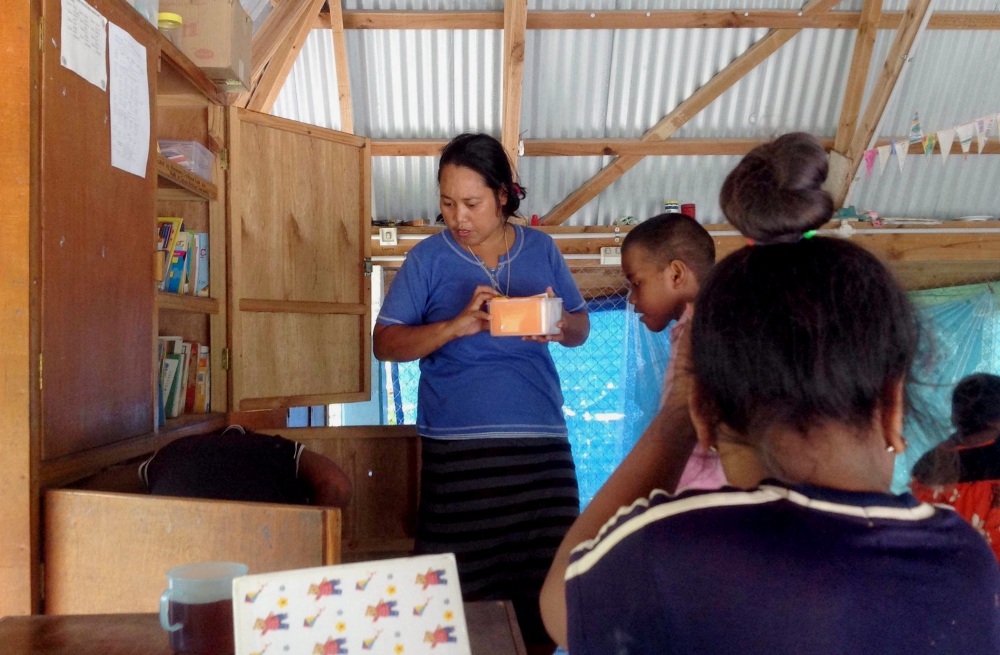 Kawi admitted that, in the beginning, her greatest challenge was the discipline of time. "In community, we live by time. Time for prayer, time to eat, time to sleep, time to work, time to study, time for leisure, time for reflection, time for anything and for everything. At home, we own our time, and in religious community, time owns us — driven by time."

Although still getting used to the disciplines, she shared her joy in the deepening faith and knowledge of God and herself, too. Her favorite prayer is the liturgy, Mass and Office, in spite of having to rise early when she would like to stay in bed.

For Tenta, the challenge was prayer, particularly learning how to pray the Office and lectio divina. She loves both now and especially the spirituality of St. Benedict, ora et labora (prayer and work). Learning about the charism of the congregation and learning all the spiritual exercises, including meditation and mantras, "provide me great joy."

The two spent two years in the novitiate in New South Wales, Australia, and returned earlier this year to begin new lives of ministry and join one of the two Good Samaritan communities. Tenta is now in the preschool, where she teaches and loves 5-year-olds. "They bring me lots of joy and happiness," but she says, "It takes a lot of patience as each child has a special personality."

She is also excited about her future and university studies in early-years education. But her most important dream is to be a "faithful Good Samaritan living the spirituality and charism, and becoming a good preacher of the good news."

Although she said that she enjoys travel, she does not expect to be sent on mission outside the country and is happy to stay in "mission to my own people."

Kawi works with children with disabilities at the Early Childhood Center where she worked before entering religious life. She feeds, cleans and cares for the children and loves it. Her dream is to become a qualified teacher of children with disabilities, even though she knows the work can be very hard. She also wants to study English and Scripture and inspire other Kiribati women to join her and the sisters.

When I asked if she had any desire to be a missionary, she said she would love to get to know the Good Samaritan Sisters in Australia, Philippines and Japan, but right now, being sent out on mission is not part of the Good Samaritan policy.

I have great admiration for people who live in hope and trust in such vulnerable environments. It is unimaginable for me. These women will face many challenges, but clearly will become important leaders to keep the people united in facing the vulnerabilities of their future as a small nation.

Empowerment toward change, a journey with youth in India

With congregation-wide commitments, sisters are active in sustainable living