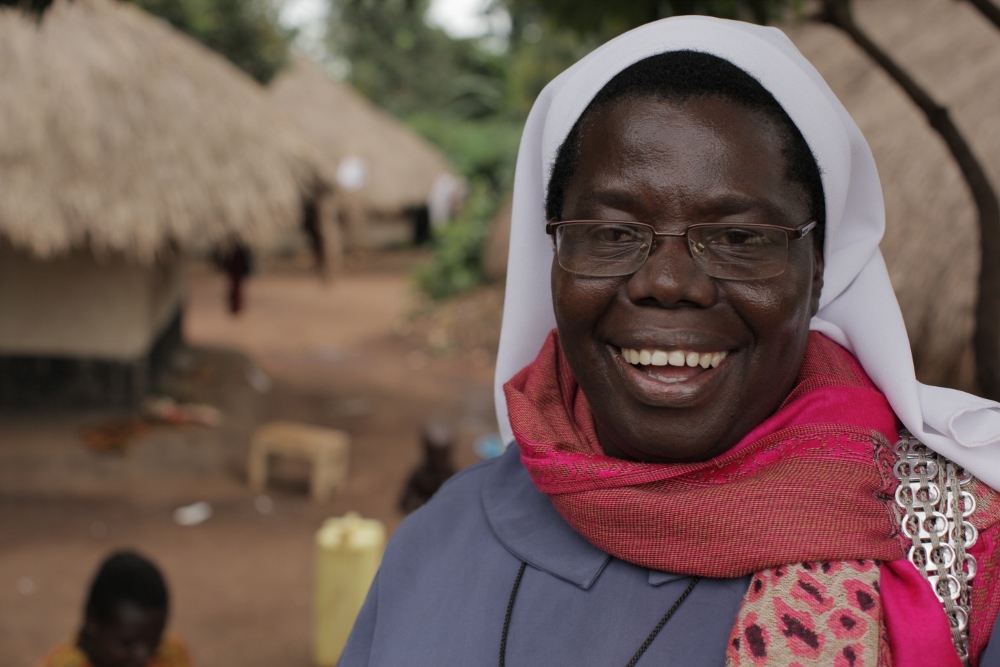 Sacred Heart of Jesus Sr. Rosemary Nyirumbe leads a vocational school in Gulu, Uganda, where she and fellow sisters work to help women brutalized by Joseph Kony and his Lord’s Resistance Army. Their work is the topic of a new book and film, “Sewing Hope.” She is holding one of the purses made from recycled pop-can tabs created at the St. Monica's girls tailoring center. (Courtesy of Derek Watson)

Update: TIME posted a video clip of the April 30 speech, saying it "wowed a roomful of VIPs."

The keynote speaker for the 2014 TIME magazine The 100 Most Influential People in the World event this evening is Sr. Rosemary Nyirumbe, a Sacred Heart of Jesus Sister from Uganda. Sister is already well known as one of CNN’s Heroes who shelters and provides education and skills training to young women rescued from the torture and abuse of Joseph Kony’s LRA camps. I met Sister in Uganda in 2011 when she was building a second home near Gulu for the traumatized young women. Sr. Rosemary is the head of St. Monica’s Girls Tailoring Center in Gulu.

She and her sisters have been working with Kony’s abducted children both in Uganda and Sudan since he began his siege. When I visited their convent in Moyo I heard many stories about sisters shepherding children from their boarding schools and orphanages through dark forests at night, crawling on their stomachs to escape Kony’s men.

Talking with them about their experiences made me wonder how they endure such constant fear for the children and for themselves. How do the care-givers survive re-living the children’s stories of horror and pain day after day? Many of the children and the sisters alike saw their families brutally murdered or abducted.

The sisters, some with specialized trauma training, do their best to rehabilitate the children to return to their families. They provide basic education and also practical skills – in sewing, cooking and housekeeping – to give the young women potential to support themselves and their children. The sisters are determined to rebuild their self-esteem and self-respect after the horribly degrading life they had with Kony.

The Oklahoma City-based Pros For Africa, a non-profit that encourages professionals of all fields to share their skills with the children of Africa, also helps the sisters by raising money, including through a new book and film about Sr. Rosemary’s work called Sewing Hope. The volunteer-based organization promotes the trendy purses and other things the girls make at St. Monica’s through Sisters United, so the products will have a market.

However, it is heartbreaking when families are afraid to take their brutalized children back. Many of the girls 13, 14 or 15 years old – so called “wives” of military captains – have babies, but taking on more mouths to feed is impossible for families who are already responsible for many children. One sister who manages a clinic told me recently that the refugees running from the current civil war in South Sudan are putting heavy burdens on the sisters’ ability to house and feed them. Aid from abroad is just not enough and access to food is far away in Kampala, where at times roads are impassable.

This community of Sacred Heart Sisters was the first congregation of sisters founded in Juba, Southern Sudan in the 1950s. Their story is one of having to flee from South Sudan to Uganda and back over and over again. The first time was in the early 1960s when all missionaries were expelled. The young women fled on foot, mostly at night, to Uganda and eventually settled in Moyo, only to flee back to Sudan in the late ‘70s to escape the torturous rule of Idi Amin; then back again to Uganda in 1980s when civil war in Sudan broke out and lasted until 2005. Some of the sisters refused to leave, hiding in remote mountain caves with their people. I visited one of these remote missions and Juba in 2006, right after the war and found the sisters’ bombed-out headquarters outside Juba. We traveled in guarded convoys, partly by road, staying within the confines of marked landmine areas, and partly by plane because Kony was blocking roadways to Juba.

The sisters know well the traumas of being refugees and this is why Sr. Rosemary can speak so passionately about healing the many wounds inflicted by war. Congratulations to her and her sisters.

Ministry | A light shines in Uganda

When in Dublin, Francis should apologize for Magdalene laundries, too