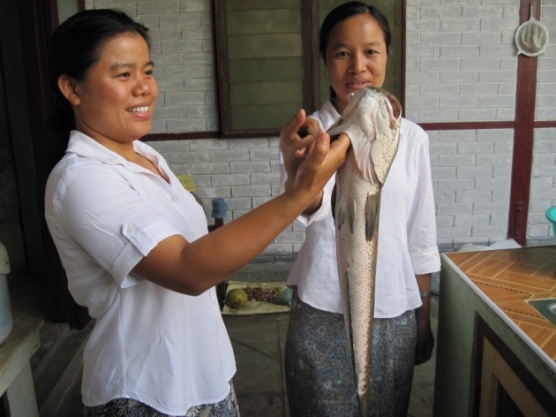 Srs. Mary Than Htay and Christina are surprised and happy to get the snakehead fish for cooking. (Courtesy of Sisters of Our Lady of the Missions)

Pyay, Myanmar — Resilience and passion characterize women religious the world over but in some countries, such as Myanmar, they have had to endure particularly difficult challenges: war, repression and confiscation of property. The Sisters of Our Lady of the Missions in Myanmar, whom I first met in 2001 and again in March of this year, exemplify this perseverance over adversity.

The first Sisters of Our Lady of the Missions (known as RNDM — Religieuses De Notre Dame des Missions) arrived in Burma in 1897 when they began working with women and children, particularly through opening English-language schools.

Life was never easy in Burma as the first European sisters found the hot, tropical climate very difficult. But it was to get much worse in the country run as a British colony. In 1942, Japan invaded Burma, and 13 sisters were imprisoned, although the six of Burmese sisters were released in a few months. The other sisters — from Ireland, Australia, New Zealand and India — remained in prison until 1945. The Japanese were ultimately defeated, but the country did not recover from the war quickly. British agreed to give the country independence in 1947 in negotiations with nationalist leader Aung San, who was assassinated just months later.

The country was granted independence in 1948, but after many years of civil unrest, a military coup in 1962 brought about a dictatorship that lasted almost 50 years.

Left: U Pho Toake and Bolay prepare to pump out water from the farmed fish pond; Right: U San Phyo is pumping out the mud. (Courtesy of Sisters of Our Lady of the Missions)

The new rulers confiscated all the missionary schools, hospitals and clinics in one year, 1964-1965, and nationalized them. In 1966, all foreign missionaries who had arrived after 1948 were expelled and the country was renamed Myanmar. The expulsion of foreign missionaries meant that young Burmese sisters had to find new ways to carry on the missions of their congregations without the institutions that had served them so well. It was a precarious and vulnerable time.

Each remaining group of sisters was given a small piece of the property on which to build a house for those left behind. The RNDM sisters struggled to discern what their new ministries would be because they were not allowed to teach in the government-controlled schools, even though they were qualified teachers. Gradually, through prayer and searching, most decided to reach out to the most neglected and suffering, particularly women and children. They started informal programs for orphans and skills training for women and girls so they could generate income for their families.

The sisters struggled to keep afloat without their schools and clinics, as pastoral and social ministries generated barely sufficient income. They made clothes and grew vegetables to sell on street markets. They began small-scale farming to keep food on the table. They lived in solidarity with the people they were serving, sharing the same struggles and sufferings.

In 2001, I met the sisters of Our Lady of the Missions because the Hilton Fund for Sisters* had awarded a grant to start a unique project that I found very interesting — fish farming. The sisters had purchased some land in Pyay in 1997, nearly 300 kilometers north of Yangon, where they began their project dream. This was something new for the Hilton Fund, but we thought it very creative because it would provide food and income for the sisters and training of the people they lived among. 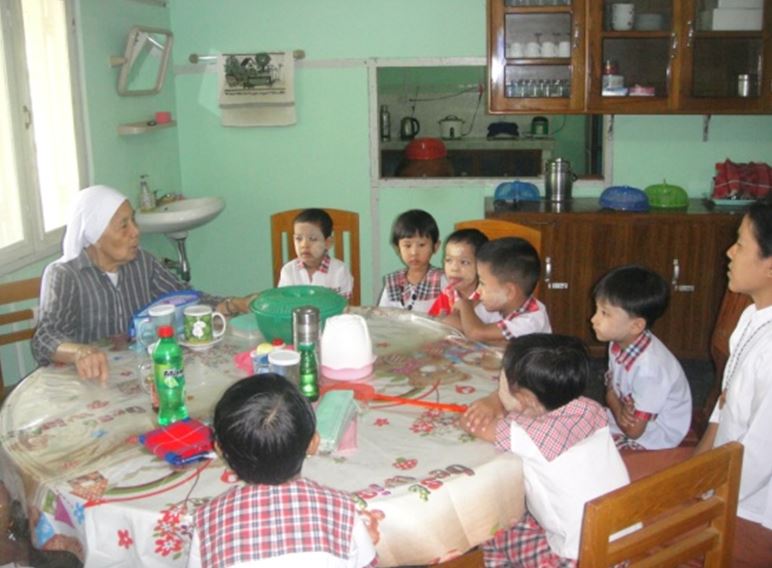 Sister Josepha tells the story to the preschool children. (Courtesy of Sisters of Our Lady of the Missions)

Sixteen years later, I again traveled to Myanmar to attend the AMOR (Asia Meeting of Religious) gathering. Two RNDM sisters met me at the airport and took me to their Yangon convent for a cup of tea. To my amazement, waiting at the door was Sr. Noreen Htun, a RNDM who is Burmese, though I had met her in Taiwan in 2003 and a few times since at other meetings. I was so surprised because in recent years I had learned she was very ill and probably dying. Seeing her standing at the door was like a miracle!

Noreen had been involved with starting that fish farm so many years earlier, and I had wondered if it was still in existence. To my delight, she told me that it is thriving! It affirmed my conviction and experience that a small grant of $9,000 could become a sustainable enterprise. That original pond, however, is only one part of a larger story of development that Noreen shared. There are 13 communities of RNDM sisters in Myanmar.

Reflecting my first visit to Myanmar and the most recent, I see a variety of changes. Sisters have become more involved in development projects for women: Farming, training of young women in computer skills, tailoring and other income generation skills. I spent a lot of time in remote areas on my first visit, where I saw extreme poverty and the beginning recognition of the prevalence of HIV/AIDS. A few years later, sisters became involved with families affected by the disease, and now, it seems much attention is being given to education and prevention of it. I noticed also that the atmosphere of Myanmar is very different this time. In spite of some caution and concerns about the conflicts with particular ethnic groups in the north, the atmosphere feels freer and more hopeful and excited about the future.

This summary by Sister Noreen about the RNDMs, particularly their development of the fish farm, gives a good picture of the hardships the country and women religious communities endured, but also some of the positive changes occurring: 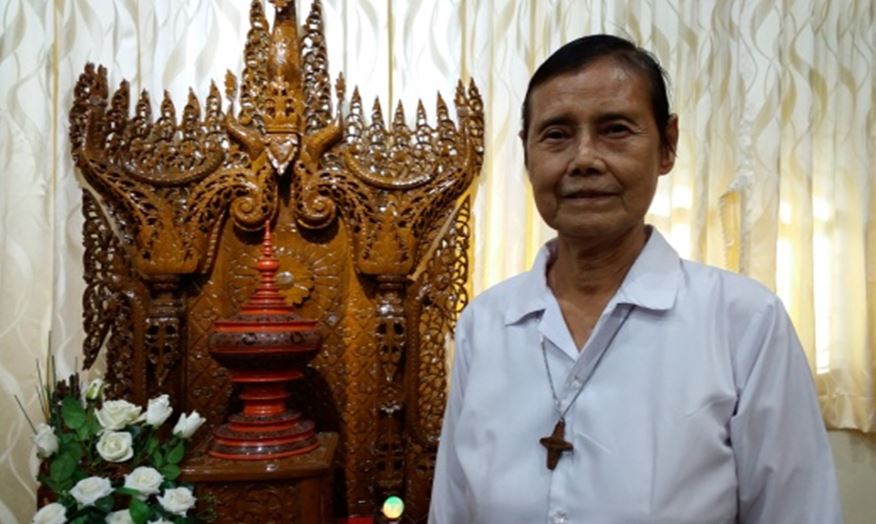 Sr. Noreen Htun: In 1997, we Sisters of Our Lady of the Missions bought 15 acres of land. Our dream was to begin a leadership course for young women who would then work with the sisters in distant villages and perhaps want to join us. The plan was to begin various income generating projects: fish farming, gardening and chicken rearing. We hoped to earn enough to finance a new education center. We began this project to address the poverty of the people among whom we lived and worked. They needed to make a living and to educate their children.

We strongly believed that agriculture in general, but especially cultivation of the land, would help support these communities. The cost of basic commodities had been rising, and families, like us, could not afford to buy even essentials like rice, sugar, oil and soap. We had to find ways to support ourselves. We also wanted to use farming methods that would not degrade the land as was happening around us. We decided that fish farming would provide food, provide some natural fertilizer and generate income.

We started realizing our dream but found many challenges. There were oozing, underground streams that made it nearly impossible to clean the fish ponds once we had harvested the fish. We continue to face this difficulty, but we have persevered. The other downside is that the deep mud hampers growth in both size and weight of the fish, making it difficult to meet the market price at the proper time. Even though we do not yet have a great volume for sale, we are able to generate enough money to educate many children in the area. The ponds provide income and jobs for our neighbors. 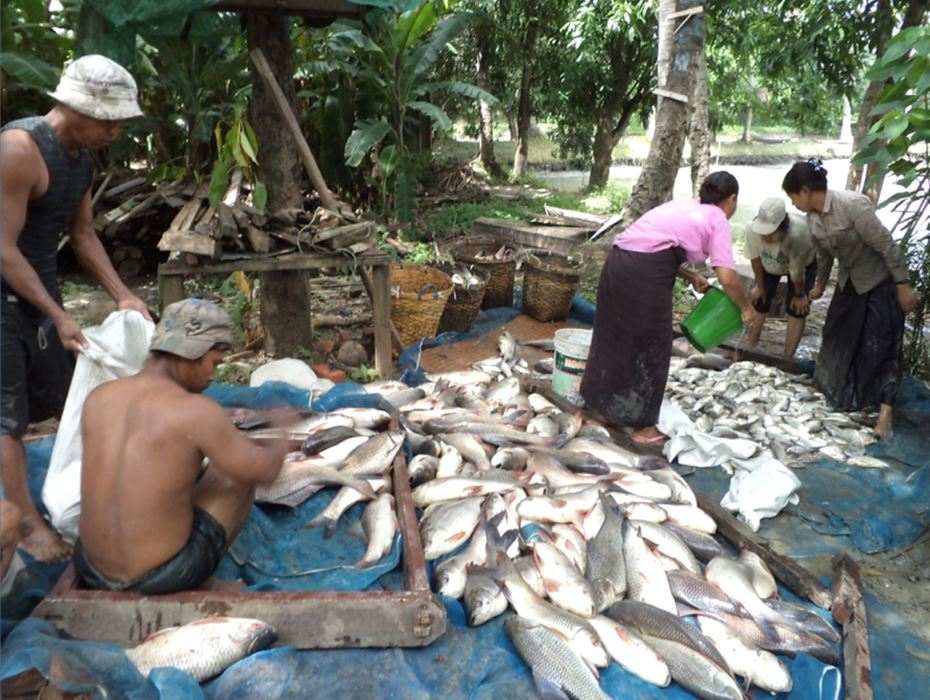 People work together to sort the fish they have harvested from the farm pond. (Courtesy of Sisters of Our Lady of the Missions)

The project has been an education for all of us, too. With the help of experts, we learned how to care for the fish. We feed them, provide clean water for new batches and clean their ponds. We also learned new things from our co-workers. The entire project has made us much for aware that we are not self-sufficient beings, but interdependent.

Step-by-step we were able to develop this 15-acre property. We established the Euphrasie Formation Center, where besides teaching practical skills, we also offer English, Scripture, church history and morals/ethics programs. The course runs for three years and is open to Christian and non-Christian girls and women. The majority of the population of Myanmar is Buddhist, so they are our immediate neighbors.

Fifteen acres is a lot to supervise, so we employ and house three families to work with us. We eventually built a dormitory as a residence for 10 secondary school girls from outlying villages so they could attend school or the technical college in Pyay.

Later on, in 2004, we secured funds to build a house, the Sophia Center, for our elder sisters. Then, in 2012, we opened a pre-school where we now have 170 children and 13 teachers, three of whom are sisters, six of whom are pre-postulants and four lay teachers. 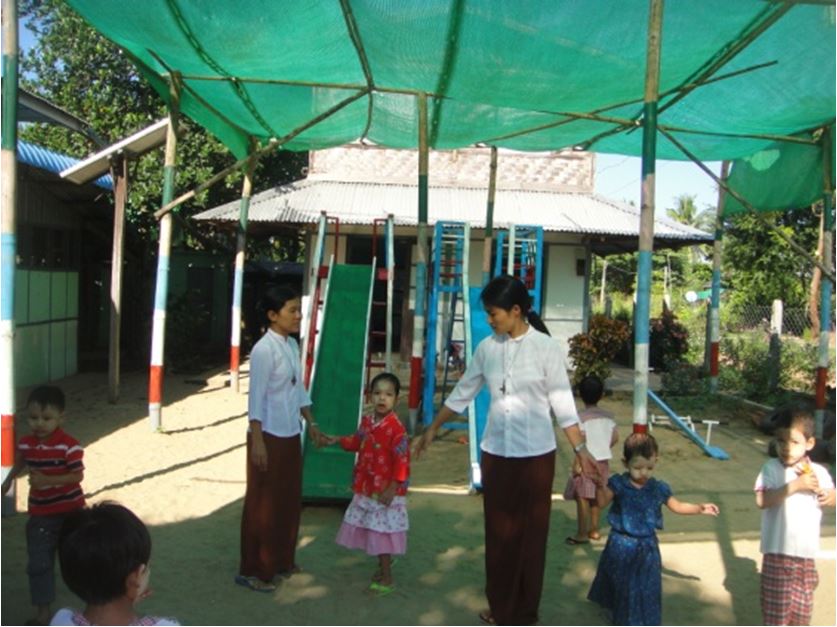 Srs. Annie Soe, left, and Angela Hnan Wai play with the preschool children. (Courtesy of Sisters of Our Lady of the Missions)

One of the greatest blessings and joys of 2017 is that the government has given permission for us to open a primary school at Pyay where our sisters had previously taught at primary and secondary levels until church schools were nationalized in 1965.

Our new dream is to offer an education unique in Myanmar. Instead of rote learning, we plan to offer an alternative methodology that encourages children to think and become active members of society. This type of education is vital to our country's democratic growth after so many years of oppression. It is very exciting for us to dream new visions of freedom. We will continue our work of providing opportunities for women empowerment, education of RNDM staff and support programs for children. We are very excited about the future and grateful to so many people who have worked with us over the years.

Religious sisters in Myanmar stand up to military junta

Justice must prevail in Myanmar!