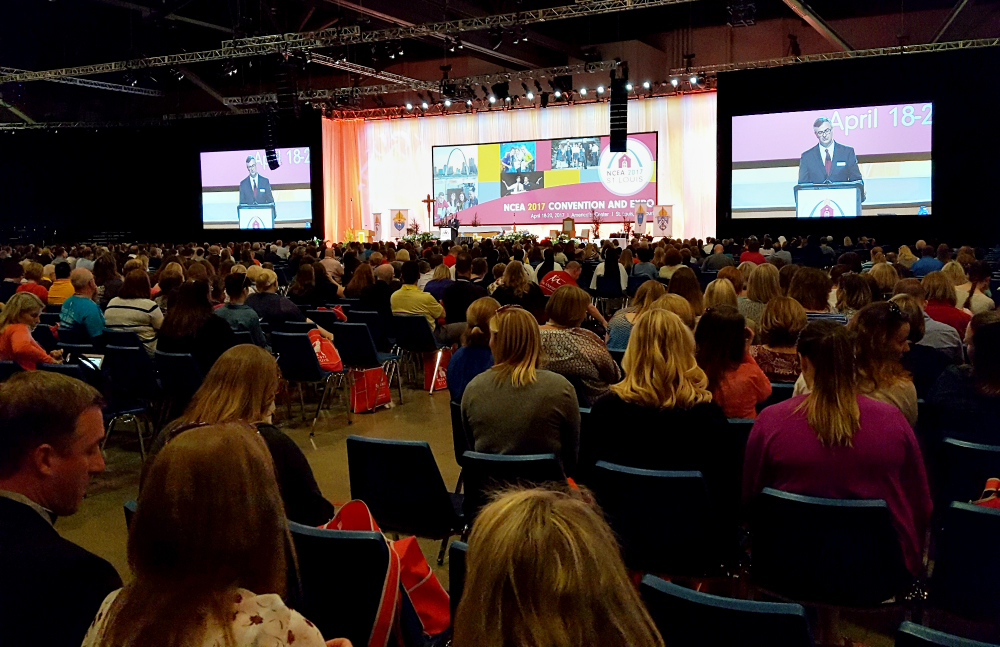 Catholic schools and libraries are in good hands.

More than 8,000 teachers, administrators, superintendents, librarians, and archivists from all over the United States were at the National Catholic Educational Association conference April 18-20, held jointly with the Catholic Library Association. There were also a good number of sisters, a few priests, and a couple of bishops sprinkled in.

It was a good year to be in St. Louis. According to the welcome letter written by Kurt Nelson, superintendent of Catholic education for the St. Louis Archdiocese, this fall will mark the start of the 200th school year for Catholic schools west of the Mississippi River. Religious of Sacred Heart Sr. Rose Philippine Duchesne, who became a saint in 1988, opened the first free school west of the Mississippi in the St. Louis Archdiocese on Sept. 8, 1818 — and we took note of the fact that the first school was for girls only! 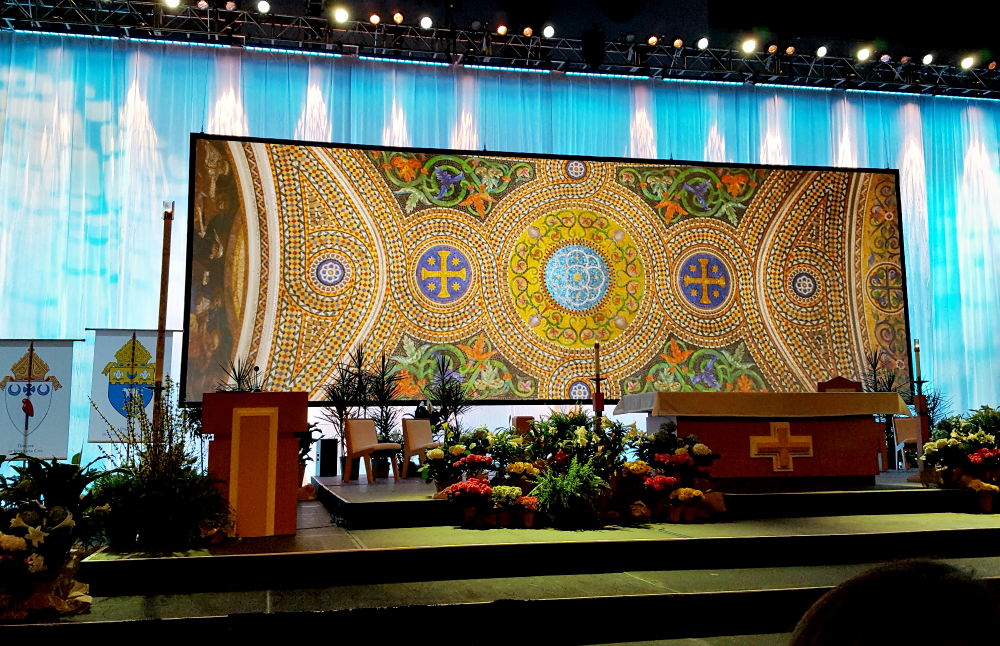 The keynote speaker, Australia's Jonathan Doyle, entertained and inspired us with the message of "Finding Purpose in the Education Vocation." He convinced us that the only branches that burn out are the ones not connected to the vine, and the only transformative teachers are the ones who become who they really are: saints.

It has been a number of years since I attended an education convention, and I was interested in the "evolutionary changes." Just as the decreased number of women religious in schools is evident in the changed image of Catholic school staff, the exhibits also reflected other changes in society and education. Displays of science lab manuals for homeschooled children showed some examples of changes in curriculum, and many exhibits featured online courses. 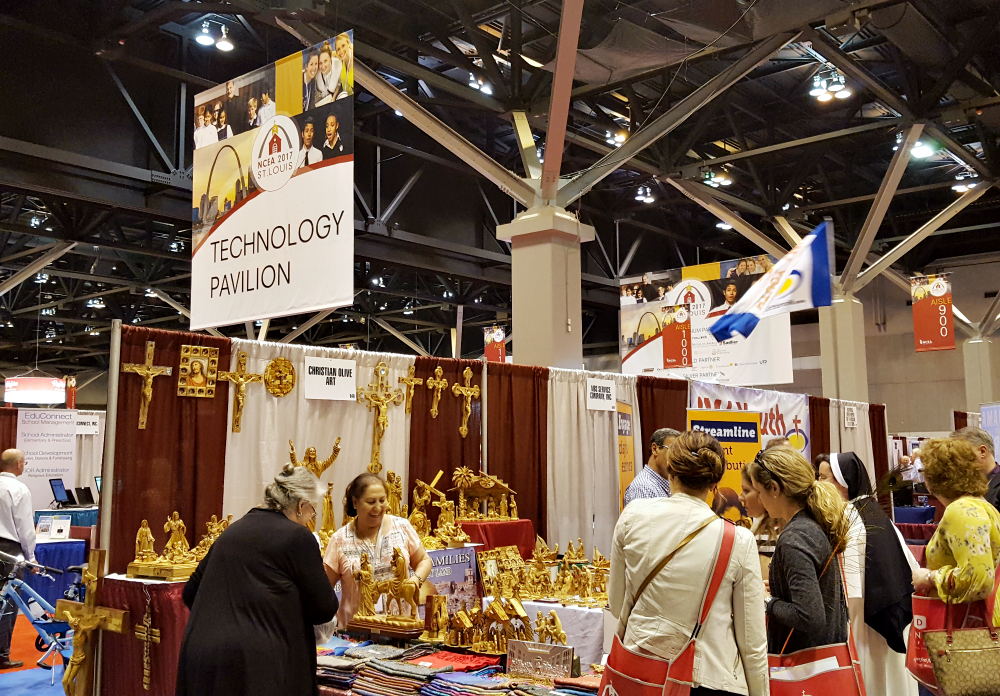 GSR Editor Gail DeGeorge and I gave a presentation — one of more than 250 professional sessions offered — about the broad range of missions and ministries by Catholic women religious around the world and how GSR reflects this. The audience was appreciative, and we networked with many potential sister-writers and got several good ideas for other aspects of our work.

Gail said she was impressed by the standing-room-only crowd at "Bringing the Works of Mercy to Life in Our Catholic Schools" session. From the creative ideas that the teachers, catechists and religious education instructors shared, it was clear they want to ensure their schools aren't Catholic in name only.

These are programs that go beyond food drives, as important as those are, to really challenge students to live out the Gospel message. One teacher shared how she invited local speakers — a doctor from Nigeria, a Catholic sister from China — to help break down stereotypes. Others pointed out that "visiting the imprisoned" can also include residents of nursing homes to reach out those "imprisoned" by loneliness. 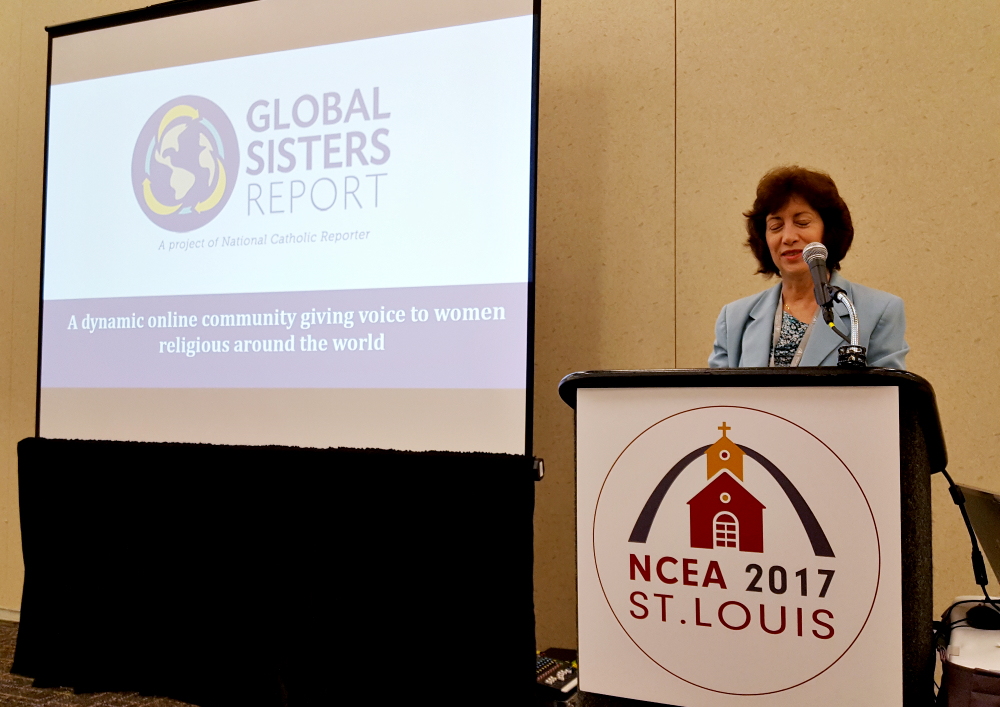 GSR Editor Gail DeGeorge gives a presentation about the broad range of missions and ministries by Catholic women religious around the world and how GSR reflects this. (GSR photo / Michele Morek)

Catholic social teaching is not a political statement, said presenter Mickie Abatemarco, senior consultant and director of assessments and school catechesis for the National Catholic Educational Association, in reviewing the U.S. Conference of Catholic Bishops' seven themes of Catholic social teaching. Pope Francis has "invited us to go deep" in carrying out the corporal works of mercy, to live them out in our families and schools, and to connect the relationship between justice and mercy, she said.

Another session dealt with bringing archives and libraries to the online classroom, with plenty of ideas for ways GSR can connect with learners. And I joined my fellow board members of U.S. Catholic Sisters Against Human Trafficking in a well-attended panel presentation that included an articulate trafficking survivor. She described in great detail how easy it is to get lured into and then trapped in trafficking, even in the United States. The audience held its collective breath during her story!

A man who had been in the audience of the Global Sisters Report session later tweeted about our GSR presentation:

Best session yet with @sistersreport #NCEA17 Nuns getting stuff done. Thank you for sharing the Gospel that you are living!

Sisters, that message was for you! 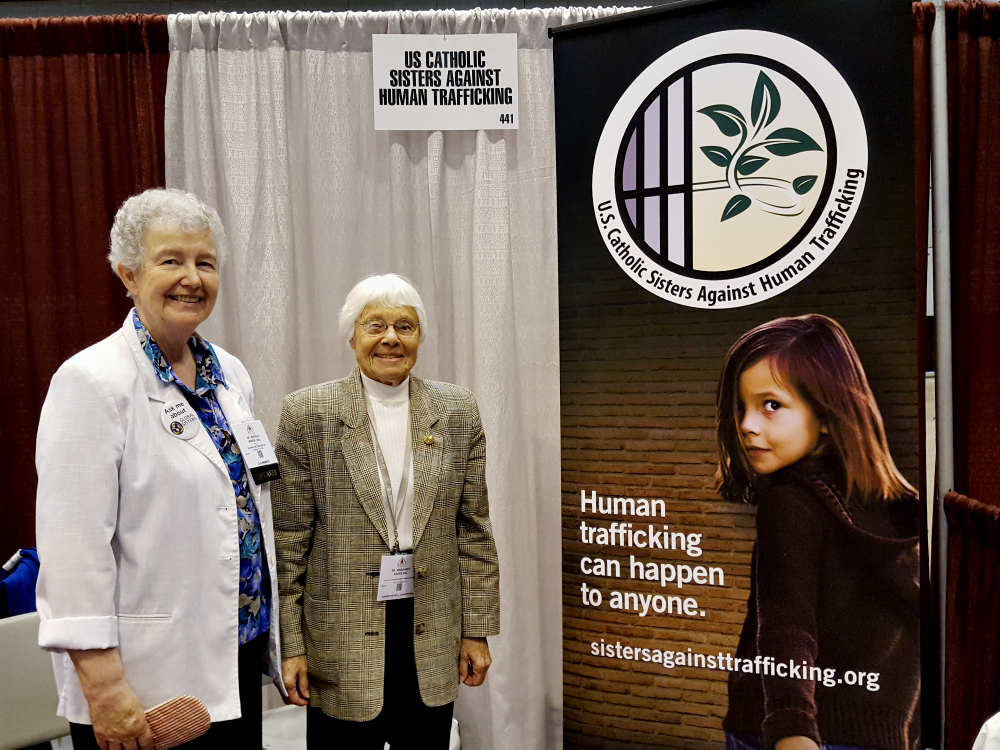 Q & A with Sr. Kathleen Erickson