by Natalia Liviero
Ministry
This article appears in the Notes from the Field feature series. View the full series. 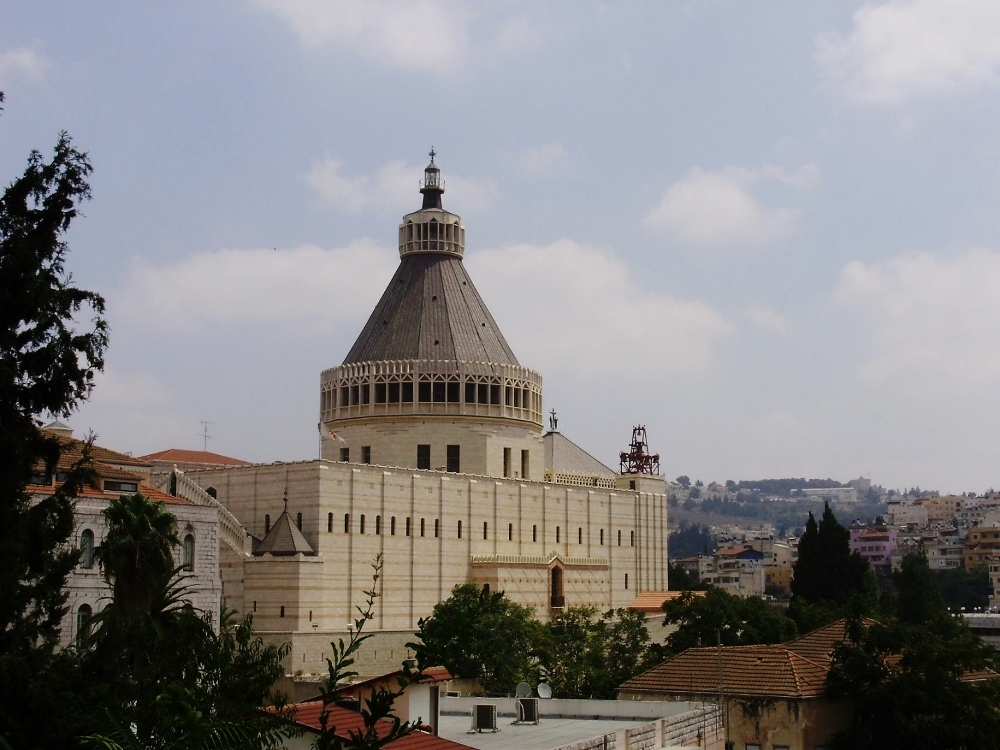 Basilica of the Annunciation in Nazareth, which was built in 1969. It stands over what is believed to be the site of Mary's house, where angel Gabriel appeared to her. (Natalia Liviero)

I was on mission in Jordan for about four months. On Sept. 5, I took a bus to the Salesian Sisters' house in Nazareth, my next mission site.

I have heard great things about the sisters' community in Nazareth and, although I was going to miss all the wonderful people I met in Jordan, I was excited about this new mission, which is completely different than the one I had before.

Crossing the border into Israel is never easy. The border staff asks a lot of questions and makes you feel unwelcome. 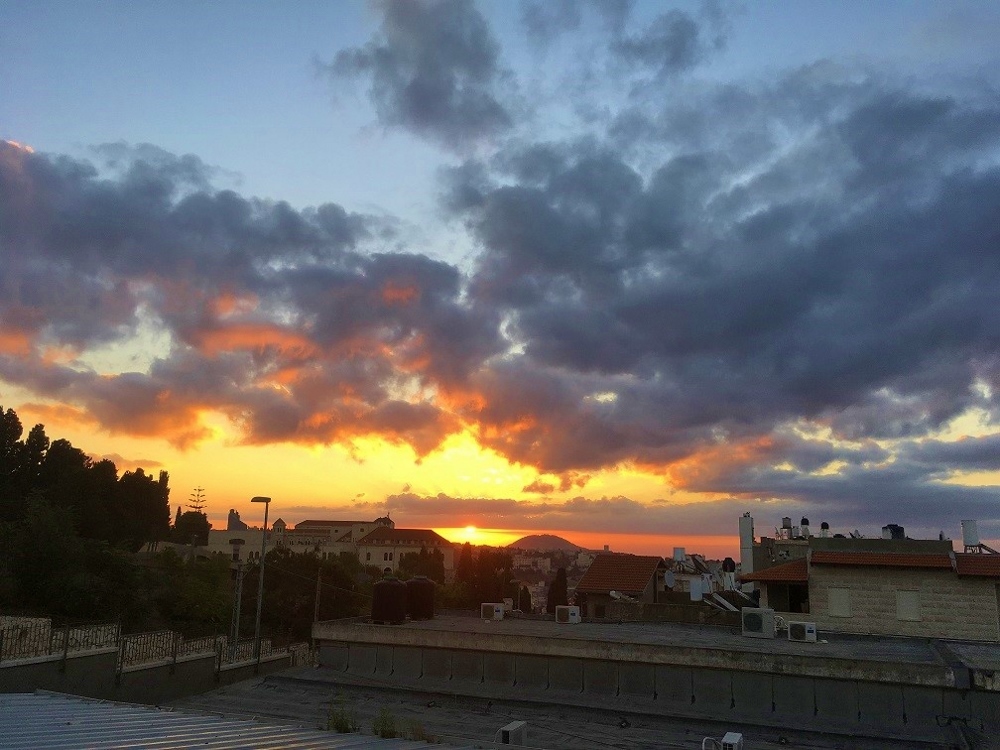 Sunrise over Mount Tabor seen from our house in Nazareth. One morning after morning prayer, while getting ready for breakfast, one of the sisters opened the door of the house, amazed by the colors of the sunlight that were shining on the window, and shouted, "Look at Mount Tabor!" (Natalia Liviero)

However, I usually meet pleasant people who make my day. In Amman, for example, the Iraqi-refugee taxi driver who took me to the bus station didn't want to charge me for the ride after the conversation we had about my time volunteering in Jordan with refugees, but, understanding how hard it is for refugees to make a living, I couldn't accept and paid. Then, on the bus, there was a nice Israeli Arab lady who was constantly coughing, and since I was also sick and had cough drops with me, I gave her one. We had a short conversation about what I was doing in Jordan and in Israel, and she was thankful and gave me her own rosary as a gift. There is always kindness when you are kind to others.

I left the house in Amman at 1 p.m. and arrived in Nazareth at around 7 p.m. I was tired but was very happy when I saw Sister Suheir, the animator — what the Salesian Sisters call the superior of the house — and Sister Roxana, whom I had met in Jordan, by the bus stop waiting and looking happy to see me.

There are nine sisters in the community in Nazareth, and I'm the 10th member. There are three sisters from Egypt, two from Italy, two from Syria, one from Lebanon, and one from Bethlehem, the Palestinian territories. They are all truly kind and joyful!

My mission consists of assisting the sisters at their high school, supervising the students, especially during the students' arrival, their daily break, and at the end of school. In October, I started assisting the break for elementary students from fourth to sixth grades, as well. I was told I was going to teach English, but instead, I talk with the students and help them improve their conversation skills.

There isn't much to do around the house since the sisters have help, but I work with Sister Yvette on Mondays to prepare the buona notte — the last community prayer and reflection before going to bed. (The congregation is Italian, so our official language is Italian.) I also prepare dinner on Tuesdays. 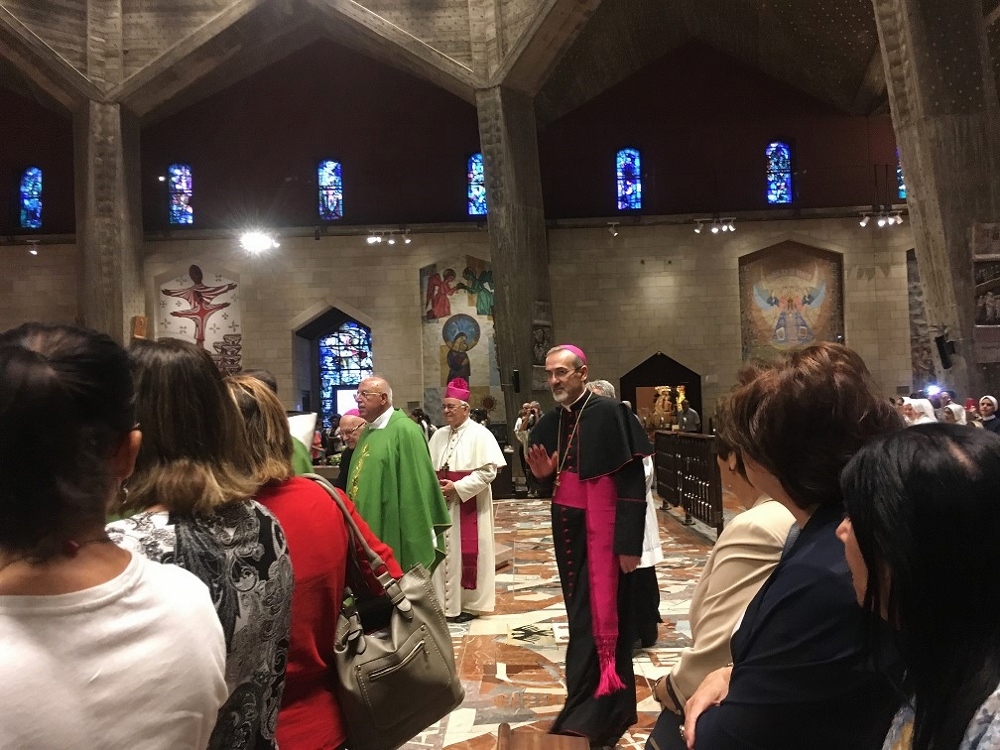 A farewell Mass for Bishop Giacinto-Boulos Marcuzzo, which took place in the Basilica of the Annunciation, was presided over by Fr. Hanna Kildani in the presence of Latin Patriarch Emeritus Michel Sabbah; Archbishop Pierbattista Pizzaballa, Apostolic Administrator of the Latin Patriarchate; priests from different churches; and hundreds of faithful who converged from all regions of Galilee. (Natalia Liviero)

The sisters have an intense schedule, and I've been trying to adapt to it by participating with them as much as I can. For example, the wake-up call during the week is at 5 a.m. to go to meditation at 5:30 a.m., followed by Mass at 6 a.m. and prime or early-morning prayer; at about 6:40 a.m., we have breakfast. After breakfast, they go to the school, which is on the same property, and I go at 7:40 a.m. to assist during the students' arrival.

We eat lunch at 11:45 a.m. then go back to school until 2:30 p.m., but other sisters with more responsibilities don't have a fixed time to finish. In the afternoon, there is community rosary prayer at 4 p.m. followed by snack time from 4:30 to 5 p.m., when the sisters go to vespers or evening prayer. Dinner is at 7:30 p.m., and from 8 p.m. to 9 p.m., there is a community recreation time. At 9 p.m., one of us would give the buona notte, and right after, everyone will go to bed.

Saturday and Sunday are more relaxed because there is no school, but the prayer and community time is the same with a slight variation on the morning activities.

One of the challenges I faced since I've arrived was my health. I got sick in Jordan and spent six weeks with a strong flu that developed into acute asthmatic bronchitis.

On my third day in Nazareth, I had to go to the hospital to get checked because I couldn't breathe and was coughing a lot. Two weeks later, I had to go see the sisters' doctor, who gave me more medicine. Right after that, I got a bad cold again with a fever and stayed in bed for a week. The humid weather and cold breeze in the morning and evenings and hot weather during the day have been challenging for me, and I had to rest a lot. I had to speak as little as possible and rest whenever I could until I started feeling better in early October. I appreciate the sisters' kindness and sympathy with me. 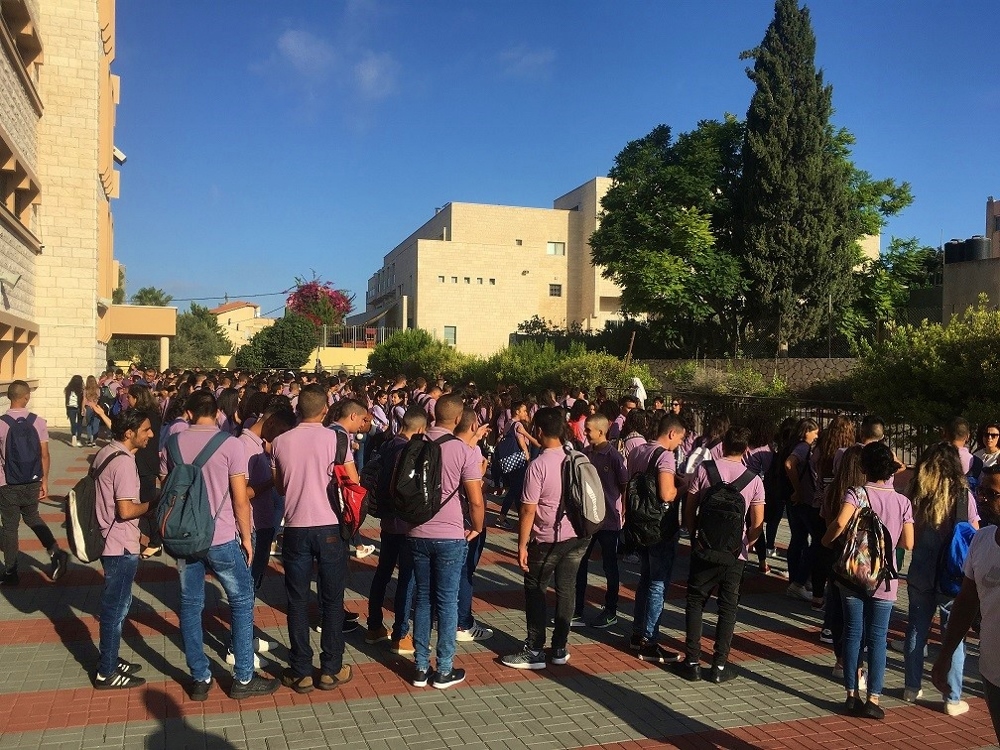 Morning formation at the Salesian sisters' school. The school was built 70 years ago and has several buildings. This is a view from the area of the high school and middle school where the high school students get into formation for the morning routine. (Natalia Liviero)

But among the challenges, there is immense joy when the kids from the elementary school come to talk to me and ask me questions and when girls hug me — they are so affectionate! I also enjoy talking with the girls and boys at the high school during the break or when I'm on their floor in the school. Some are happy to speak English with me, and the ones who don't speak it are happy that I know Arabic. My presence among them and my interaction with them has a positive impact, which goes both ways.

One day, I went to the pharmacy to get some personal stuff and asked one of the ladies who worked there to help me. She ended up being the mother of one girl from the high school that I met earlier that week, and when I told her my name, she said "Oh, yes, my kids told me about you. They love you." That made my day! I was so happy to hear that.

Ministry | The struggles and joy of a new mission site

The gift of building our identities

Acting on a deep call to a different ministry