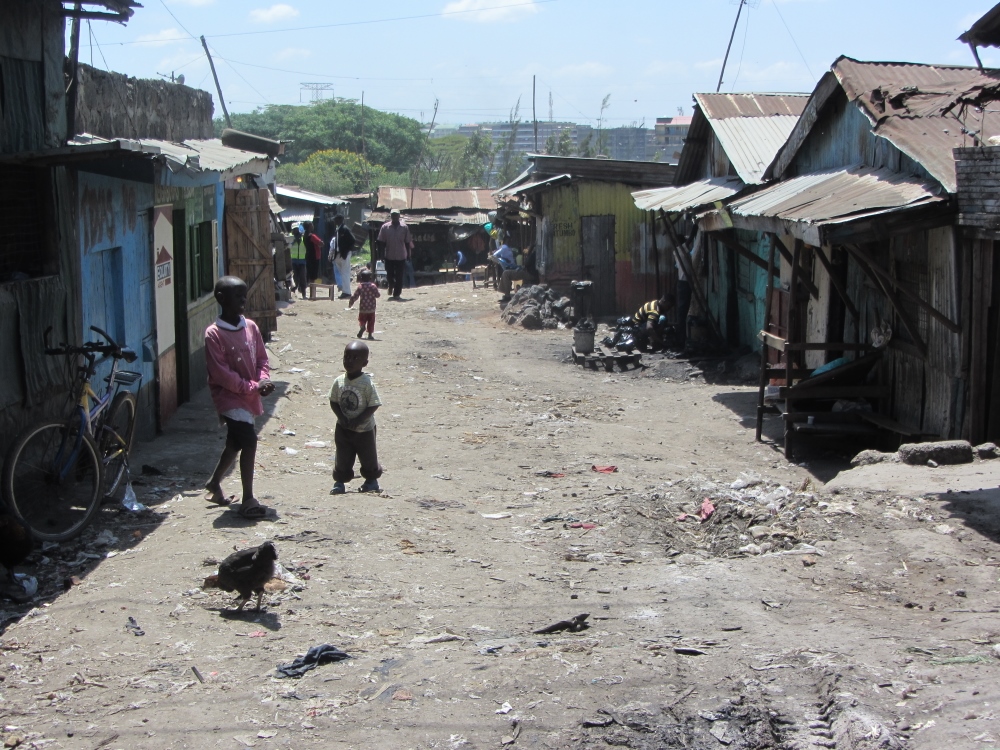 The Mukuru slum area is east of Nairobi, Kenya, where people settled after the country became independent in 1964, though residents live on land they hold no deed to. (Joyce Meyer)

It is hard to believe that it is three weeks since the Global Sisters Report was launched. Preparing for its new life has been both exciting and challenging. I remember in December, we at National Catholic Reporter Publishing Company were wondering how to encounter sisters in Africa when we received an invitation to go to Nairobi, Kenya, to present a workshop on global technological communication to national conference secretaries from nine countries of East Africa. Of course technology is not my expertise, but because of my new role as international liaison my task was to introduce the new Global Sisters Report editor and NCR web staff to this unique world of sisters. Everyone was excited, and we scurried to plan a program, get tickets and visas and for those who had not traveled to Africa before, injections of various kinds.

To our shock, four days before we were to leave in February, we received word that the workshop was being postponed for at least a month because the grant needed to finance it had not been confirmed by the donor. The program planners could not take the risk to have people from 10 countries arrive without money to pay the bills. So, now what? It was decided that I would be sent because we needed to have something to contribute from the global south as we launched the new website in April. I needed to quickly plan a new strategy and agenda. It was decided that Jill Day, our new GSR journalist in Zimbabwe would also come to Kenya as planned so she could be introduced to the sisters, a new world for her.

Living with interruptions and changing plans is common for the sisters in the global south, often dependent on benefactors for resources to carry out their programs.  So, when I arrived in Nairobi at 4 a.m. on Friday morning, there was Sr. Agnes Wamuyu to meet me. She had set aside her plans for mine. Sr. Agnes, the secretary of the Association of Sisters of Kenya (AOSK) took me to Tumaini, the AOSK resource center and hostel. By 9 a.m., she and Sr. Lina Wanjiku, coordinator East Africa region of the African Sisters Education Collaborative, were sitting with me to plan the next 10 days.

The following day I began my marathon of adventures by visiting the Daughters of St. Paul, experts in media especially throughout the global south, and in the afternoon meeting with a group of sister journalists. They were very excited about the new GSR project, and one had even traveled several hours by bus to attend the meeting.  Most sisters here are radio or television journalists because the continent consists of primarily oral cultures. However, many are also educated in print journalism.

Sunday, Agnes took me to see the prize of AOSK, Chem-Chemi, an international education center for sisters where I met more potential journalists from  countries of East and Central Africa and learned about a new program of in-depth counseling starting there.

Monday started out early when Sr. Mary Crean, an Irish Sister of Mercy who has lived in Kenya for 40 years, took me to the Mukuru slum to visit one of her six schools and outpatient clinic. Over half of the population of Kenya lives in Mukuru and Kibera slums, where living conditions are incredibly poor – and yet people spend lifetimes making homes for children and grandchildren. 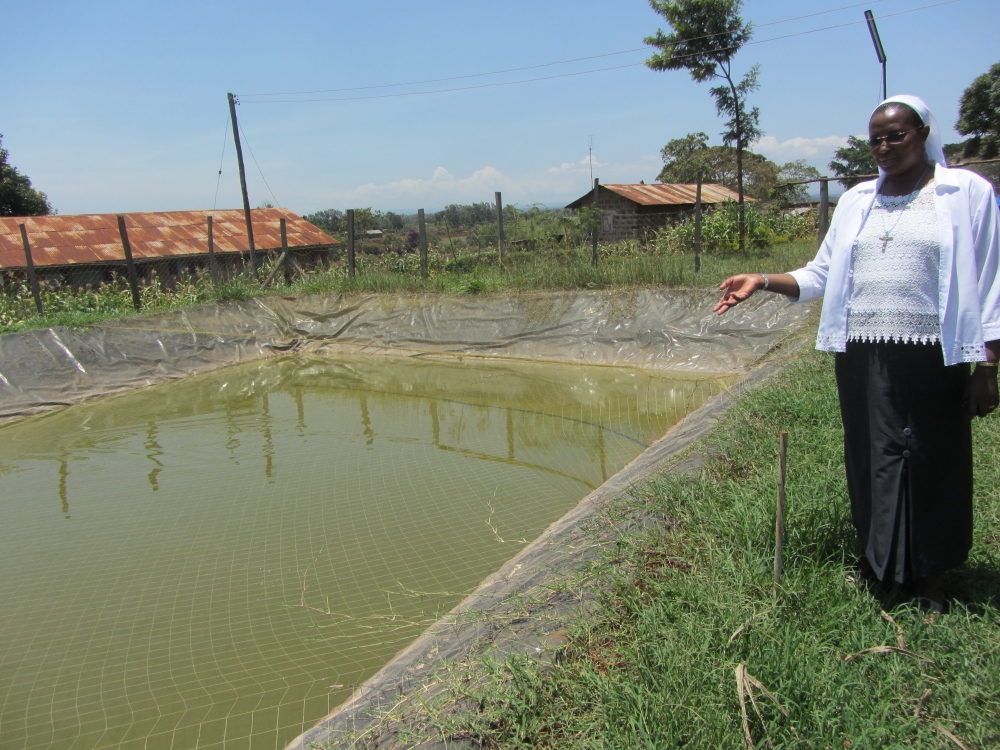 Sr. Susan Wanjiru, a graduate of the Sisters Leadership Development Institute, shows her fish pond, which is part of the agricultural projects that help sustain her congregation. (Joyce Meyer)

That Tuesday, Srs. Lina, Agnes and I visited a most exciting farm belonging to the Assumption Sisters of Nairobi. Sr. Susan Wanjiru is a graduate of the Sisters Leadership Development Institute (which is funded by the Hilton Foundation and managed by the African Sisters Education Collaborative). At this farm, she manages a sustainability endeavor to foster security for her congregation. Sister has developed coffee, banana and habanero pepper plantations, raises cows, pigs, fish and 800 quails, for eggs that are sold internationally. She supervises many lay workers and even has the senior sisters helping to sew women’s bags for sale.

Late that afternoon Jill arrived to begin her orientation to the world of sisters by staying with us at the Tumaini Center. The center is an energetic and hospitable crossroads of people from around the world. We were entertained at meals by stories of Arab-Muslim students learning English and computer skills, a Japanese priest starting a new life in Kenya, Swedish students doing research on architecture of African cities and towns and people just passing through.

The four days Jill was with me, along with visiting slums and an outstanding ministry to HIV/AIDS families managed by the Evangelizing Sisters of Mary, we met the AOSK executive committee to hear about some new projects beginning in Kenya, the AOSK Peace and Justice Committee, the executive director and chairperson of the Association of Consecrated Women of East and Central Africa (ACWECA), and sister theologians and ethicists. We also visited the first and only Catholic University started by the Assumption Sisters of Nairobi, potential writers for the Global Sisters Report and many other people.

As I ended the marathon of visits, interviews and conversations I felt this huge smile inside me, feeling confident that the Global Sisters Report was on its way to success. Africa, sometimes referred to as the Dark Continent, is far from dark. And to bring these new worlds to the attention of thousands of people cannot but change our vision of Africa and its development.

Africa is only a beginning. Our attention will expand as we find more journalists and writers in Asia, Latin America, Middle East and anywhere in the world where sisters are in mission. 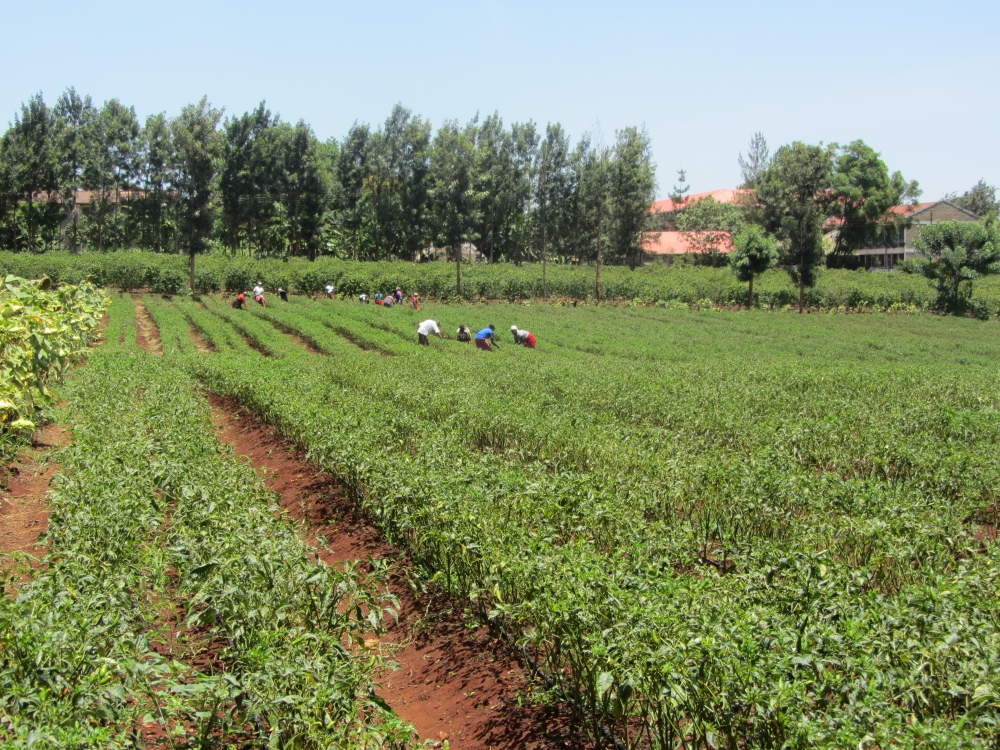 Workers picking habanero peppers on a farm that helps sustain a congregation of sisters. (Joyce Meyer)
Say thanks
2061