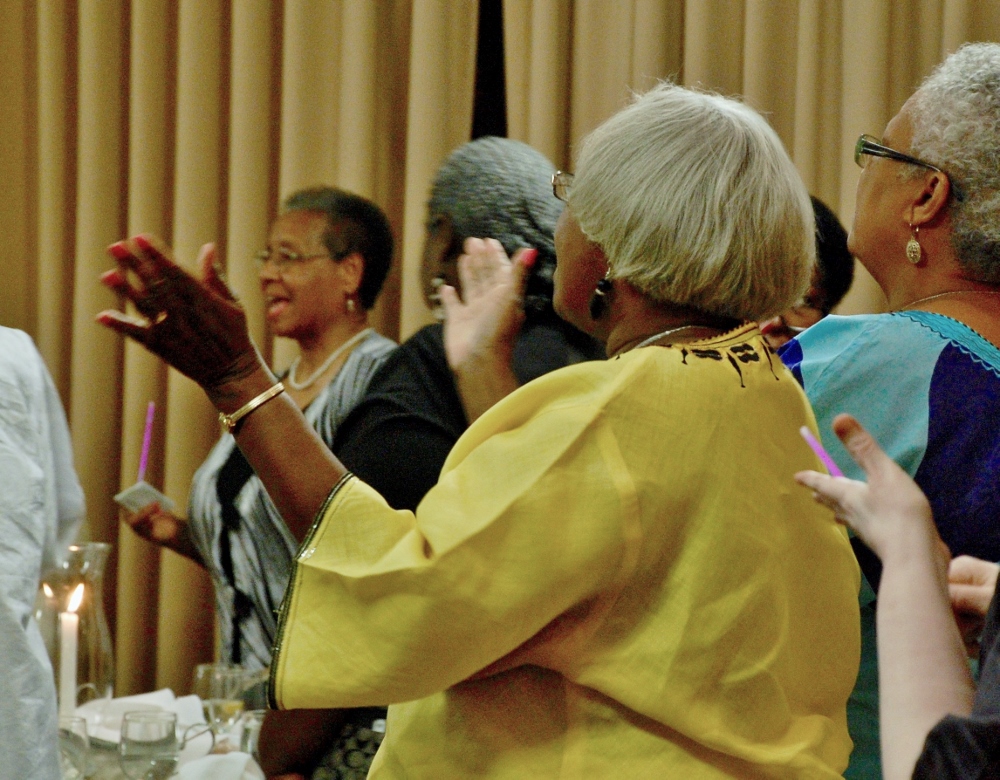 Participants clap and sing at the close of the joint meeting between the National Black Sisters Conference and three black clergy groups July 29 in Charleston, S.C. (GSR photo / Dan Stockman)

Charleston, South Carolina — The conference location was chosen a year ago, but those attending this week’s events say God clearly had a hand in it.

On June 17, nine people were killed at Emanuel African Methodist Episcopal Church here when a young white man entered the historic black church and joined a Bible study for about an hour before he began firing a handgun. Dylann Roof, 21, was arrested, and he confessed to the hate crime, saying he had hoped to incite a race war.

So Tuesday morning, they went to Emanuel AME, not knowing what they would find.

The visit turned into a sort of pilgrimage.

The stories they told me later reminded me of when my wife and I visited the Florida Holocaust Museum several years ago. The centerpiece of the museum was something I wasn’t sure I wanted to see: one of the cattle cars used by the Nazis to transport Jews to the death camps.

I love studying World War II, and am fascinated by nearly every aspect of that awful era. But there are some places I don’t want to go, some things I don’t want to see. And seeing one of the cattle cars, one of the most poignant symbols of the Nazi’s dehumanization of Jews, Catholics, the disabled and anyone else that didn’t fit their warped view of the world, seemed to me like willingly walking into a horrific crime scene. Thank you, but I’ll pass.

But instead of finding something horrible, though the rail car was used to commit absolute horrors, I instead felt as if I was seeing something almost  . . . holy. It wasn’t something I could explain, even to myself, but it felt as if that rail car, which the Nazis intended to use as a tool of almost Satanic destruction, had instead been one of the last places hundreds or even thousands of people had spent time before seeing the face of God. That, while nothing can diminish the horror or the evil it was used for, that it had also become . . . something else. That while I did, indeed, feel the intense sadness I expected to, I also felt somehow closer to those souls who had ridden in it.

I had never really understood those feelings until Tuesday afternoon, when Dominican Sr. Jamie Phelps explained that the Pascal mystery is central to Catholicism, that we celebrate the crucifixion because it led to the resurrection.

“When we’re confronted with evil, we wait for the next piece,” Phelps said. There is no resurrection without Christ’s execution — an ultimate evil that became . . . something else.

Because Emanuel AME is such a historic church — it is the oldest historically black church in the South — there are tour guides for the many visitors who come. But there have not been tours since June 17, and the group from the conference was initially turned away. No problem, members said, we’ll just pray and sing. A few minutes later, the woman there returned to say they could go in, the first group to tour the church since the shootings.

Many of those who went in talked of feelings similar to what I had experienced in Florida: intense sadness, yes; horror at what had been done, but also . . . something else. For many of them, that something else was to be inspired by what had happened just days after the murders: family members saying they had forgiven the alleged shooter.

That, they said, was a powerful reminder of what God calls us to do: Forgive, no matter what.

There were, of course, varied reactions, with different people taking away different things from the visit. But no one came away unaffected.

“I think it’s had an impact on the gathering here,” said Sister of Notre Dame de Namur Patricia Chappell. “It’s just a reminder for us that we still need to continue to do what we have been doing.

“It was very powerful that we were here at this date and time.”

Missionaries of Charity serve people on 'the peripheries' in Indianapolis