by Bridgid O'Brien
This article appears in the Notes from the Field feature series. View the full series. 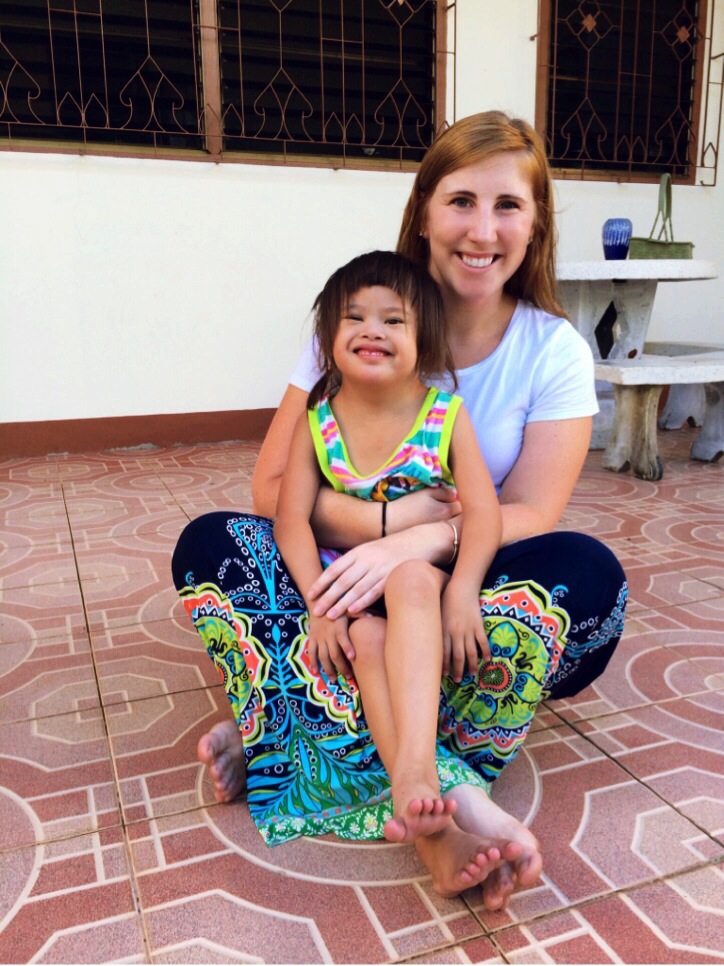 “I don’t want to hurt your heart,” I said to her in Thai, as she took her customary stance of arms overhead, back facing me, ready to be thrown as high as my strength would allow. Surprisingly, she did not protest. Instead, she turned back around. Hands still in the air, giving a toothy smile, she said “tong” (stomach). I knew without thinking what Nong Naam wanted. It had been my heart-friendly alternative to throwing her in the air since she returned home from the hospital a week prior with the news that she had holes in her septum. This rare heart disease, which is quite common in individuals with Down Syndrome like Naam, allowed blood to flow where it shouldn’t, creating more stress on the heart and consequently decreasing oxygen flow through the body. But this means nothing to a five-year-old. Instead, we needed to be more careful for her.

So I took my newly adjusted position, feet firmly planted beneath me. Securing my hands between her shoulders and armpits and using the power of my legs, I slowly lifted Naam up off of the coarse pavement. Her tiny green flip-flops began to dangle off of her toes as I progressively said the word “gin” (to eat) while simultaneously bringing her body higher in the air and closer to my skyward face. When her stomach met my mouth, I instantaneously shouted “tong.” She began to laugh uncontrollably as I shook my head into her black and white flowered dress, pretending to eat her stomach.

“I can’t do it another time right now, Naam, I need to head back to work,” I replied apologetically.

She did not like this response and placed her little hand, with its small extra thumb, into my own palm. She began to walk with me in the direction of my bike until her mother reiterated the fact that I needed to return to work at the Care Center. I told Naam that I would see her in three hours when she returned back to the Garden from Hands of Hope, the income-generating craft project where her mother works, and that we would play then.

But we didn’t play when she got home. We couldn’t. Nong Naam never came back home that day.

Two hours after I left Hands of Hope, Nong Naam began to throw up immense amounts of bloods, shortly seizing before falling limp from lack of oxygen. Help arrived quickly but she was not breathing, and her heart had already stopped. Crisidad, one of the nurses from the Care Center, performed CPR on Naam while Phermsack, another staff member, rushed them to the hospital. The emergency room staff continued to try and resuscitate her, pumping out masses of blood that had invaded her internal organs. But it was already too late. Naam had lost too much blood, a life-threatening symptom of the anticoagulant drug she had been taking to try and regulate and inhibit the mixing of oxygen- rich and oxygen-poor blood being sent to the heart. The ER staff continued to pump her bare, purple chest until the car carrying myself, but most importantly, her mother, Viscunie, arrived shortly after.

The word in Thai for sorry (sad) is sia jai, which literally translates to A damaged or broken heart. I couldn’t think of a more apt term for what I felt in the wake of Naam’s death. My heart felt broken. With tear-stained cheeks I needed to accept that she was gone and that I was the one left with the hurt heart and stomach being eaten by grief and anger and confusion. 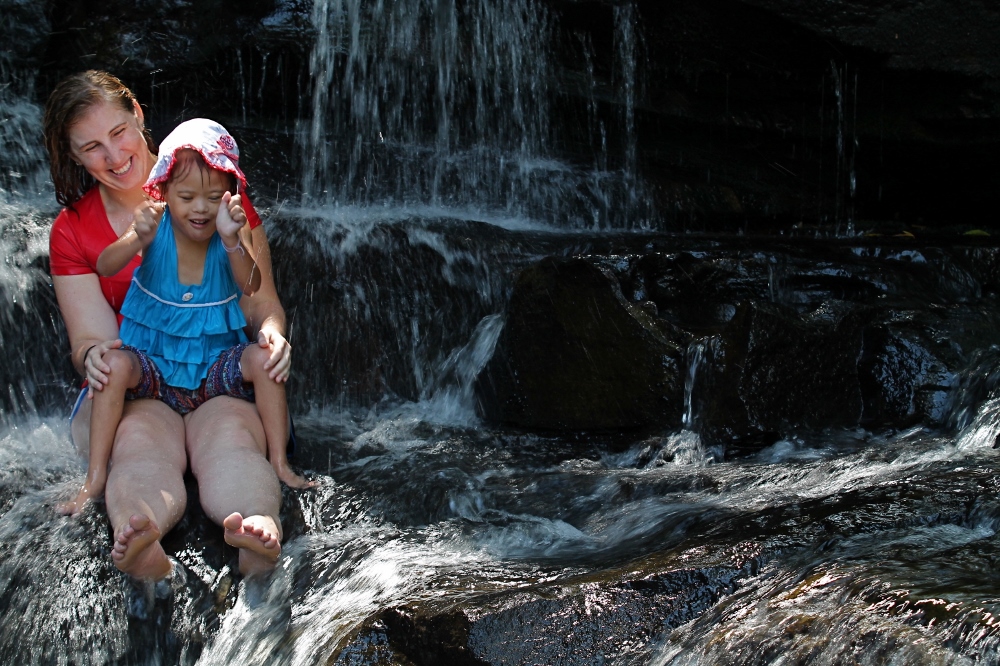 Nong Naam liked to go to the waterfall. (Provided photo)

However, even more so, I kept finding myself not feeling at all. I was completely detached from my emotions. I kept noticing myself reiterating, “Nong Naam died.” I couldn’t get out of my head the images of her blood-soaked face laying lifeless in the emergency room or dressing her in a pink tulle dress after she was cleaned – or kissing her on her cold forehead one more time before leaving the hospital. But yet still, there were parts of my mind that were in complete denial. Parts that kept trying to deceive me into believing that this was all an illusion, that it was not her coffin that we all slept next to following her death, that it was not the tears of her mother I heard as she lay next to me, staring at a photo of Naam all night, not her body we buried the next morning. Parts of my mind wanted me to believe that as I got to work, Nong Naam would be sitting at the picnic table at the Care Center in her starched white-collared uniform shirt, navy blue skirt and light blue overlay, with her hair in three pig tails on her head, waiting to be driven to school. But then the other parts of my mind would remind me of the unthinkable truth. That doesn’t mean my body didn’t figure out some other defense mechanisms to bar out reality.

I didn’t cry at her funeral. My body wouldn’t let me. It might be because I used up my whole reserve of tears at the hospital. Or it could be because I did not really sleep much the night of her death. Or it could be that my mind was protecting itself by just not feeling at all. Now, I hate crying. I use all the strength I have to not cry when I think I am going to. Sometimes this works, other times it doesn’t. But the day of Naam’s funeral, I prayed that God would just let me feel. That he would just let me feel the full weight of all that was going on around me. I wanted to connect my emotions with the deep dark dungeon of images floating in my mind. I wanted to break down all the defenses I have built against my emotions. For the first time ever, I wanted to cry. But I couldn’t.

I got teary eyed watching Viscunie beginning to faint, for the fourth time, watching people cleanse Naam’s body in her coffin with a water-soaked palm leaf. I felt a sickness in my stomach as two-year old Nong Gaa asked, “Where is Nong Naam? I don’t see her.”

I felt confusion and anger at Naam’s being taken out of the world so soon. I felt peace knowing that Naam loved and was loved by so many people. I felt awestruck thinking of the extent of lives that Naam, a five-year-old with Down Syndrome in a small farming village in Thailand, touched from all over the world. I felt melancholy knowing I would never see Nong Naam again. But yet, I still could not cry. In fact, in the weeks and months following Naam’s death, I actually felt an overwhelming sense of peace and tranquility.

Knowing that I was in a weird place of not feeling, or better yet, not feeling the grief that I thought I should be feeling following Naam’s death, a good friend of mine told me to “Take whatever comes when it comes. And if the grief doesn’t, maybe it is because Naam was a presence of grace and not grief, and she wouldn’t want you to grieve her, and she needs you to be the light that she was for the community.”

It was good to be reminded that peace does not indicate the absence of anxieties or dire circumstances but instead is a grace granted to take the sting out of adversities. It was exactly what I needed to hear in that moment and I reflect on it often even eight months after Naam’s death.

In the almost 11 months I have been in Thailand, my community has needed to bury eight patients along with Nong Naam, who was HIV negative. In addition I have had to grieve the loss of my grandfather after his unexpected death in early April from thousands of miles away, away from the comforts of family and familiarity. I have learned that my natural instinct to grief is to close off, to shut off, to construct a steel cage around my feelings to prevent them from escaping. While I have been working on processing the deaths that have occurred since my time in Nong Khai, I have also stopped trying to make myself feel sad and instead just let the feelings of stillness or anger or confusion or sorrow move through my body as they enter – as unnatural for me as it is.

The losses I have faced here have helped me to focus my attention more on the relationships I am building and have already built here. I have tried to face each day remembering the light that all those who have passed, but most especially Nong Naam, were for the Garden, and to make sure all those I interact with here in Nong Khai know how much they are loved and how much love they give to me. For sometimes flowers of peace can bloom in even the most desolate of deserts. 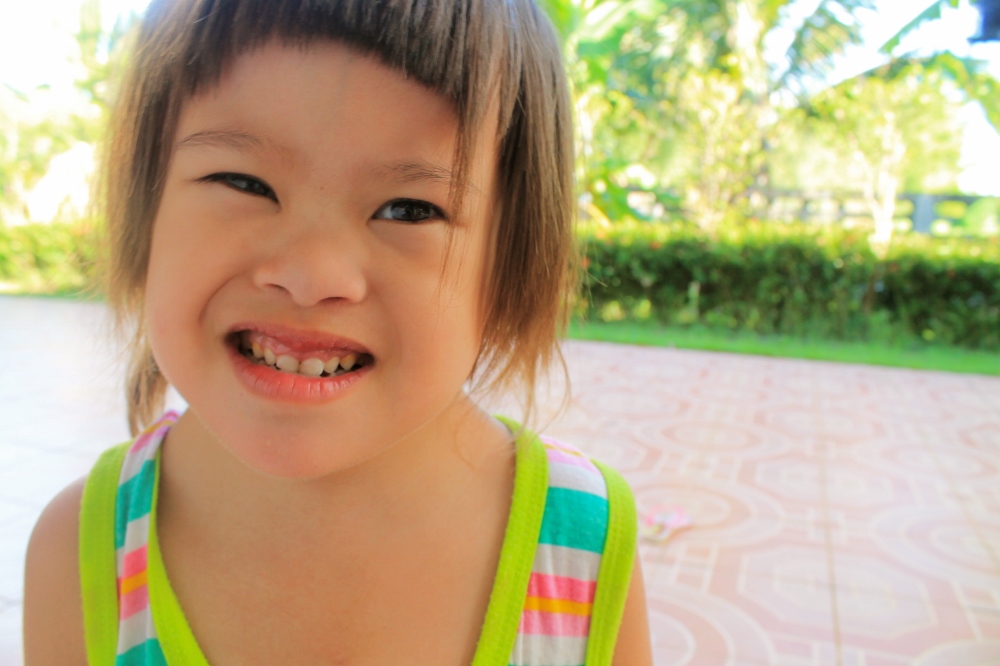 I may have only had her in my life for three months, but Naam was the type of child you love instantly, the kind of child who reaches to the core of your soul. I loved Nong Naam deeply, and everywhere there are still reminders of her in the Garden – my flip flops that she would always steal and I would have to retrieve at her house, the crayon marks on the wall in her house, her picture on my wall, her mother.

To block out the pain of losing her, I often need to remind myself of the good times I had with Naam  – of holding her at the waterfall, of playing with her every single day after work, of her doing my hair with Nonnie, one of the other girls in the Garden, of her finally calling me “Bridgid” and not just “B,” of her having me carry her back to her house many nights because she didn’t want to let go of me yet, of her knocking on my bedroom door because she wanted to play, of her unexpectedly entering my home, of spinning her around like an airplane, of throwing her in the air, and her laughing as I pretended to eat her stomach.

[Bridgid O’Brien is an international Good Shepherd Volunteer in Nong Khai, Thailand, working with an organization that provides care, resources and income-generating opportunities for individuals affected and infected with HIV/AIDS.]