Notes from the Field are reports from young women volunteering in ministries of Catholic sisters. The project began in the summer of 2015 when, working with the Catholic Volunteer Network, we enlisted four young women working in Honduras, Thailand, Ethiopia and the United States to blog about their experiences. The fall 2015 series presents two more women, both volunteering with sisters' ministries in the United States.

Did you know that the yellow flowers produced by tomato plants eventually develop into tomatoes? I recently learned this and more important things when I visited one of the many tomato farms here in Immokalee. It was such a great opportunity for me to experience what a typical day of a farmworker is like.

(For privacy reasons, I am not using the name of the farm I visited.)

Every year, this farm sends its crew leaders and human resources personnel to the training we provide at the University of Florida. During the training, the HR manager extended an invitation to two co-workers and me to tour the facilities. Sure enough, a few weeks later, we were on a truck touring the fields.

After many trees and bushes, we began to see what looked like a large, beautiful lake, which in fact was 8,000 acres of tomato fields covered in plastic.

The life of the tomato at this particular farm surprisingly does not begin at the farm itself; it starts at a nursery, where they plant the seeds. Once they sprout, hundreds of seedlings are then purchased by farms such as this one. This is much more convenient for the farm because starting tomatoes from seed takes time, effort and space. The already-purchased seedlings then get transplanted, this time at the actual farmland.

This monstrous agricultural machine also carries a driver and three farmworkers, typically women. Their job is to place one seedling at a time from the crate into a spinning wheel. As the mule train moves forward, this spinning wheel reaches far enough into the ground that it is able to automatically plant the seedling while at the same time shooting in some fertilizer. The pesticide at this stage is in the form of tiny white grains that are mixed in with the soil.

The three farmworkers who walk behind the mule train, also usually women, have an important responsibility, too. They each hold a crate of seedlings and watch to make sure that the mule train does not miss a hole. When it does, they quickly plant a seedling themselves. At the same time they check that the mule train is planting each seedling correctly; otherwise, an improperly planted seedling has a high probability of dying.

Grupo de las estacas ("stake group") is next. This is both a very laborious and mechanically intensive process. First, one round of farmworkers walks around each row of tomatoes and places stakes between the plants. These stakes are used to keep the plants standing up straight as they get taller. Next, another tractor carrying 12 farmworkers comes to each row. Each farmworker has a drill that hangs from the top of the tractor that makes sure each stake is straight and sturdy enough to sustain the tomato plant.

When the plants are about 2 feet tall, the next step is the twining, tying the plants to their stakes. The twine needs to be put around each stick multiple times for the plant to keep growing upward. Twining a few plants can be easy when you do it in your own backyard, but imagine doing this as a full-time job, eight or nine hours a day in 90-degree weather. This part of the process is all human labor.

As I observed, the degree of difficulty of this process became apparent, and it made me appreciate every ounce of sweat that came from these farmworkers. As you can see from the video, it requires a lot of physical effort to twine stakes taller than you.

It is important to note two more things. One, it is at this particular stage that pesticides get sprayed on the plants. I learned that the farm hires "plant doctors" to help the farm diagnose and control specific pests and diseases affecting their fields. They give recommendations as to which chemicals to use and how much of each to apply. Two, the portable restrooms and water station were located next to the field where the farmworkers were working, giving them easy access to these amenities. It was a good feeling to see this because I have learned from many people in Immokalee that the absence of these basic amenities is a common violation among many agricultural farms.

Once the tomatoes get picked, they get transported to the farm's packinghouse. There, the tomatoes are rinsed, put into boxes and sent to retailers and grocery stores. Unfortunately, I did not get to see this step in action because the farm did not have any packers on staff that day.

When I first arrived at the farm, I felt as though I was mentally critiquing everything I saw because of the fact that this was a conventional tomato farm. However, I decided to take a step back and set all of my biases aside for a few hours. I kept reminding myself that I was there to observe and take everything in as a learning experience.

These biases formed because of recent experiences I had in college and in Immokalee. I earned my bachelor's degree in environmental studies in May, so everything I learned in college is still somewhat fresh in my mind. Every class and every topic we talked about revolved around sustainable, organic farming; I even had an internship at an organic farm in Mexico. Throughout my four years in school, I learned all about the negative effects of conventional farming. For example, exposure to pesticides can lead to acute and/or chronic health effects on humans. And what about the many environmental effects of pesticides?

All of these issues were going through my mind at the farm. In college, whenever we talked about these issues, students and professors would always refer to the environmental effects of conventional farming. There was very little attention paid to the effects on actual humans and the repercussions this had on their families and job life. Never did we analyze case studies like the story of Carlitos, who was born without any arms or legs. Here in Immokalee, people constantly talk about how these issues impact their lives at every level.

Overall, the experience was great. Florida is the nation's highest producer of fresh tomatoes, with a majority harvested here in the Immokalee/South Florida area. So I was very grateful that I had the opportunity to see not only every step in the tomato-growing process, but also how much dedication and strength it takes as a farmworker to grow tomatoes.

My vision of an ideal farm clashed that day with the reality that farmworkers still have to work at these conventional farms. Until we find a viable way to implement other alternatives to this kind of farming, we should be open to listening to farmworkers' stories and seeing what their work is like. Even though this farm appeared to really appreciate and take care of their farmworkers, who seemed healthy and to be working under good conditions, the reality is that not all farms are this transparent and fair to their farmworkers. This is why we have to be more aware of the hazards that exist in their work atmosphere and make the effort to visually observe the conditions and circumstances in which they are required to work. 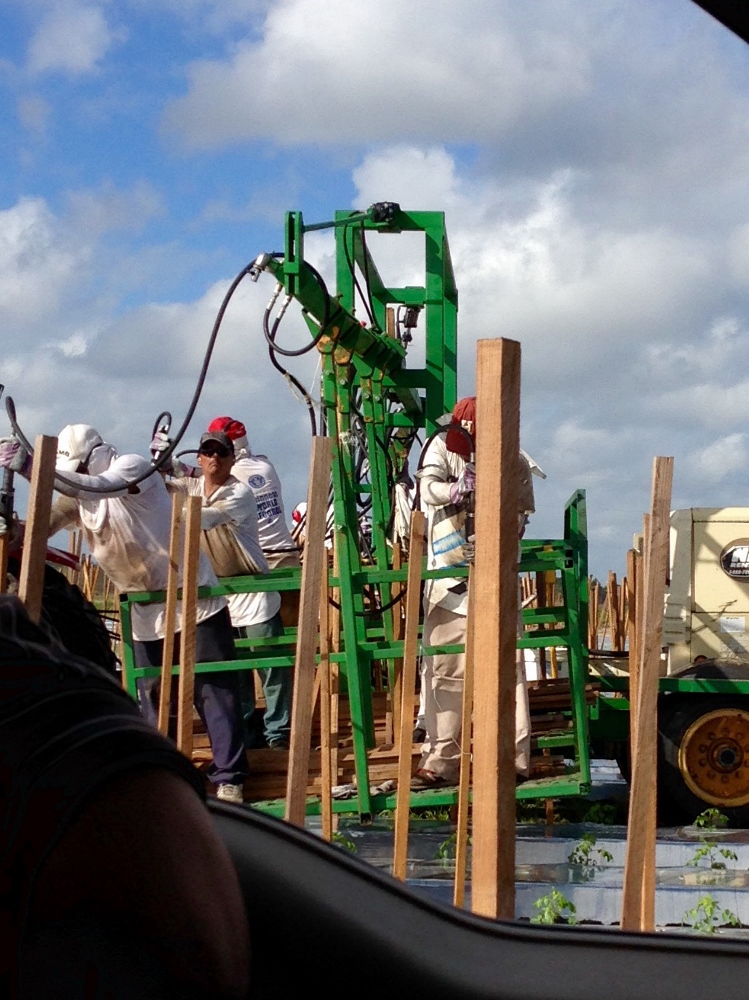 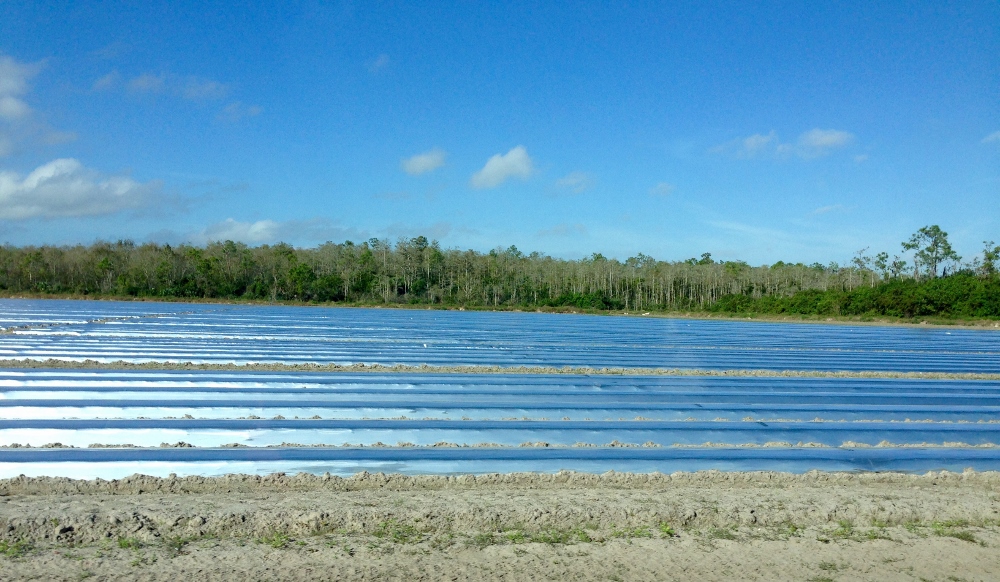 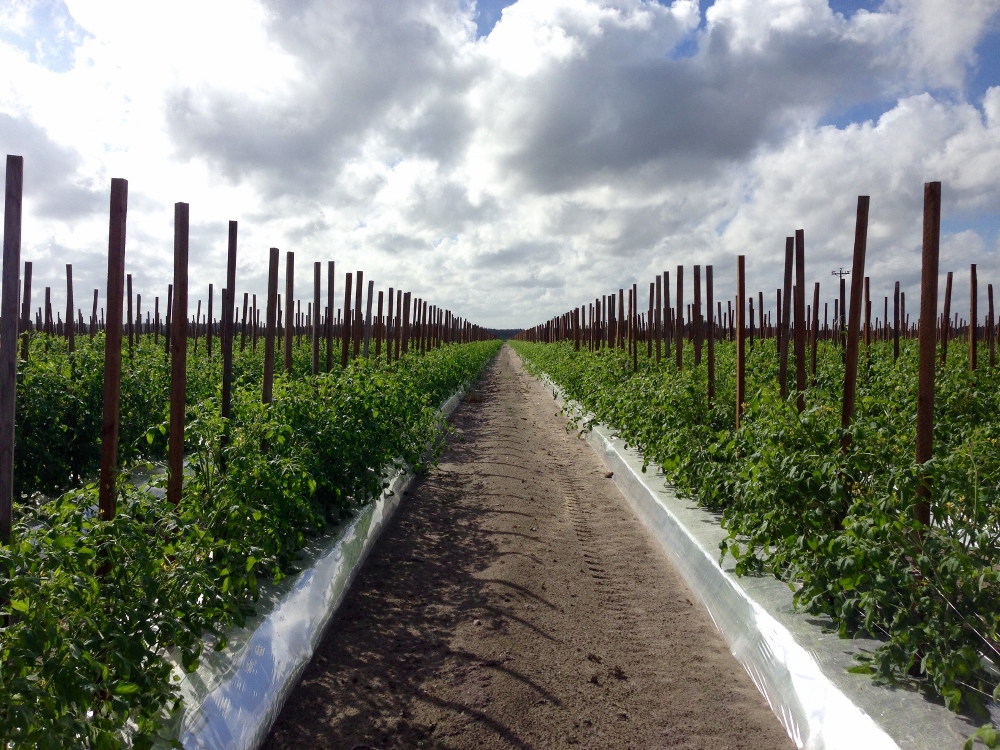