Pauline sisters in Nairobi were near al-Shabab's latest attack 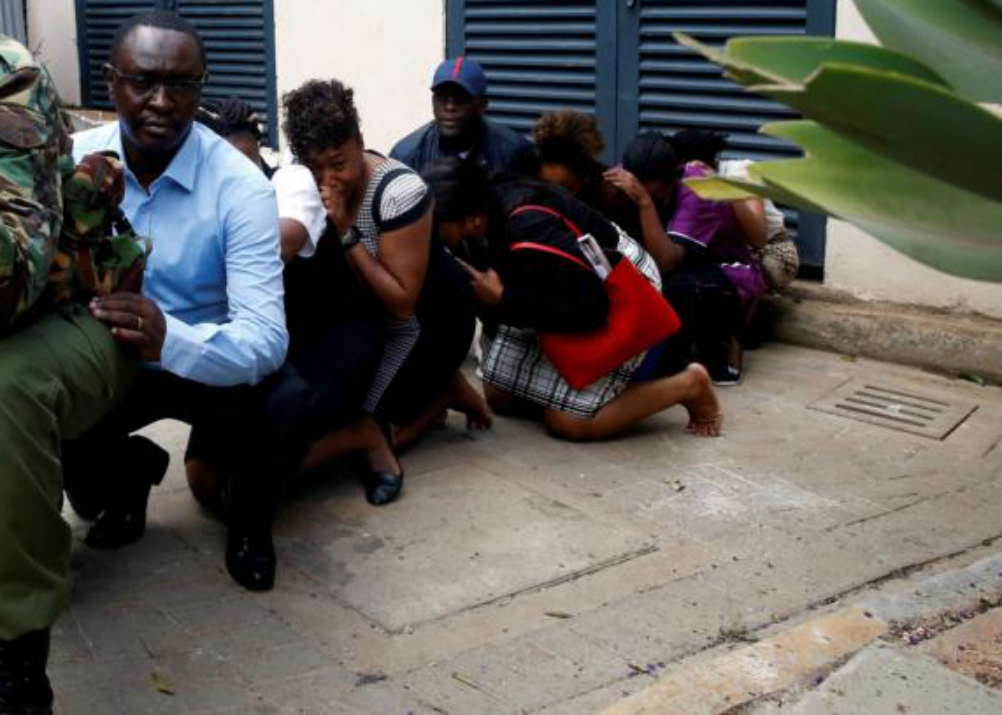 People are evacuated by a member of security forces Jan. 15 at the Dusit hotel compound in Nairobi, Kenya. An Islamic militant group stormed the luxury hotel in Kenya's capital, setting off explosions and gunning down people at cafe tables in an attack that killed at least 15 people. (CNS/Reuters//Baz Ratner)

The deadly terror attacks Jan. 15 in Nairobi Kenya were frighteningly close to the Daughters of St. Paul – their compound in Nairobi's Riverside neighborhood backs up to the office and hotel complex where the attacks occurred.

The attacks began, the New York Times reported, with an explosion at the I&M Bank, which borders the fence separating the complex from the Pauline compound, which includes a Pauline Books and Media location less than 300 feet from the bank building. There was then an explosion at the Dusit Hotel a few hundred feet further into the office complex, followed by hours of gunfire between al-Shabab militants and police and security personnel.

A Daughter of St. Paul sister reported in a group chat for sisters that everyone in their compound was safe but very frightened. At least 21 were killed in the attacks, including an American who had survived the Sept. 11 terror attacks in New York City, and five militants, NPR reported. The sister could not be reached for comment.

After the area was secure, the Association of Sisterhoods of Kenya's Justice and Peace Commission team, working with a local counseling center, went to the neighborhood to support the affected families, sisters in the chat reported.

New York Time columnist Nicholas Kristof warns that a massacre could be in the future in Sudan, where protestors have been taking to the streets since Dec. 19 to demand the ouster of the regime of President Omar al-Bashir, who has been in power for 30 years and is wanted by the International Criminal Court for genocide.

"Other presidents have committed genocide over the last century, but Bashir has the distinction of conducting three different genocides by my count: in South Sudan, in the Nuba Mountains and in Darfur," Kristof wrote. "He is not just a serial killer; he is a serial genocidaire."

The West has been eerily silent, Kristof argues, which will only embolden Bashir. A doctor and a child were killed in a large march Jan. 17 when police fired on protestors, Kristoff estimates about 40 have been killed since protests began.

"In the day's most violent clashes police in Khartoum's Burri neighbourhood fired rubber bullets and teargas, and chased demonstrators with batons, witnesses said. Several people were overcome with teargas, while some were bruised by rubber bullets and others beaten," The Guardian reported.

In the United States, the separation of children from their asylum-seeking parents at the southern border was worse than thought.

About 3,000 children had been reported separated from their parents while immigration officials worked to deport them, but a new government report released Jan. 17 said the number was thousands higher, the New York Times reported.

The separations occurred under the administration's "zero-tolerance policy," which called for nearly all adults entering the country without authorization were targeted for deportation, even though federal law makes clear they have the right to apply for asylum even if they crossed the border illegally (entering at places other than official ports of entry).

The United States Department of Health and Human Services report said thousands of children may have been separated from their parents before a court required the government to track their numbers.

"This report confirms what we suspected: This cruel family separation practice was way bigger than the administration let on," Lee Gelernt, who challenged the policy in court on behalf of the American Civil Liberties Union, told the Times. "We will be back in court and ask the judge to order the government to explain these numbers."

New York Times reporters found last year that at least 700 more children than reported had been forcibly taken from their parents before the "zero-tolerance policy" was announced, and the new report says at least 118 separations have occurred since a court ordered them halted June 26.

Pauline sisters in Nairobi were near al-Shabab's latest attack