by Adele McKiernan
This article appears in the Notes from the Field feature series. View the full series. 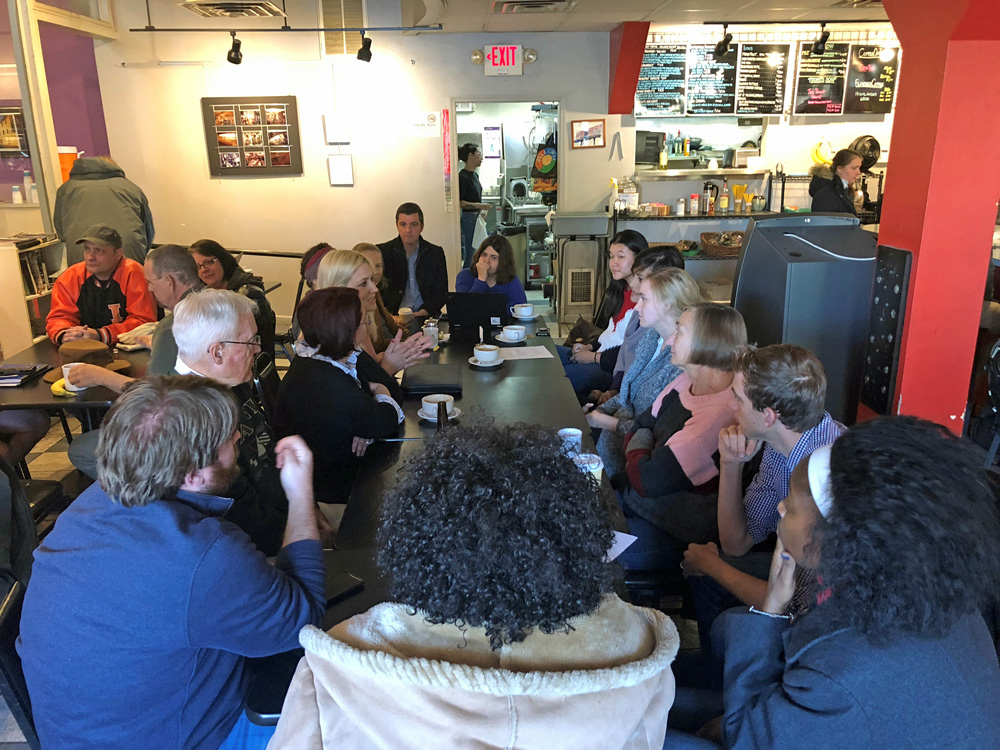 My placement site as a Loretto Volunteer is Missouri Health Care for All, or MHCFA, a health care advocacy organization. We were founded in 2007 by a coalition of faith and community leaders in St. Louis who saw the need to take action to combat the suffering of people with inadequate care in Missouri. As the most comprehensive health care advocacy organization in the state, we combine grassroots movement-building with direct lobbying in a way that builds bridges between constituents and their legislators and builds community among those experiencing the injustices of the health care system.

We have developed a Storybank project of hundreds of Missourians' health care stories, orchestrate in-district meetings with constituents and their representatives, and hold volunteer meetings such as Health Care Story Shares, Legislative Updates, and Op-Ed/Letter to the Editor Workshops that develop community strength and promote public education. On the lobbying end, our policy director in Jefferson City does policy development and lawmaker education, and communicates with organizers to run statewide lobby days during legislative session.

Missouri Health Care for All envisions a state where all Missourians can access quality, affordable health care, no matter where they live, how much money they make or who they are.

I chose to apply to the Loretto Volunteer Program after going to the office hours of my public policy professor at the University of Wisconsin-Madison, who is a member of the Loretto Community. When I asked her what she would recommend to someone interested in intentional community and being more involved in the policy process, she recommended the program. When I researched the placement sites, Missouri Health Care for All seemed like the best fit. 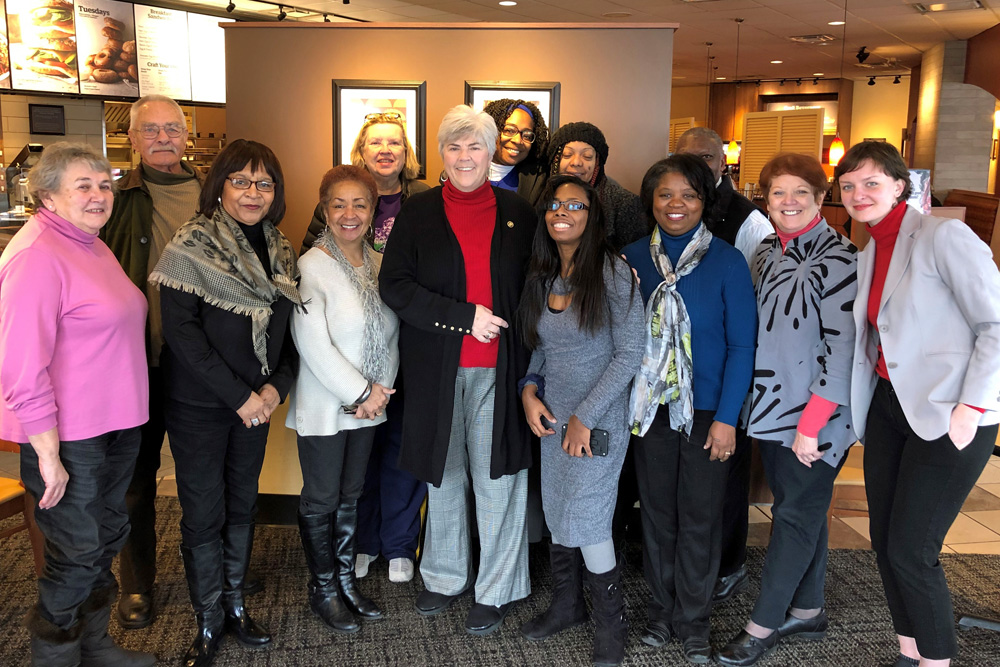 Constituents with Rep. Gina Walsh at an in-district meeting where we discussed restoring cuts to consumer directed services, surprise medical bills, and state-level protections for pre-existing conditions. Since this meeting was before the legislative session began, we also asked what her policy priorities were and what health care issues we could help her with. (Courtesy of Jake Walker, organizing director of Missouri Health Care for All)

Missouri Health Care for All has grappled with being a liberal organization in a red state over the years, but during my time here, MHCFA has been pushing for action on more progressive policies. While the past decade has left the organization focusing on Affordable Care Act protection and set us on the defensive on the state level, as well, focusing on mostly incremental changes, we have moved toward a more proactive and unapologetic policy agenda this year.

While we still advocate for incremental change — right now, we are pushing for more protections for surprise medical bills, ending the sale of short-term health insurance plans, and stopping Medicaid work requirements — we have realized after talking with thousands of Missourians who still aren't getting the care they need that we need systemic change to tackle the disastrous state of our country's current system.

Last month, our board of directors approved our official position on "Medicare for All." We call it our Pillars for a New American Health System, which strives for a system that would create one integrated health care system, give Americans the freedom to choose their health care provider, eliminate cost barriers to care, provide comprehensive care, and emphasize community health and equity. This position is a framework for how we would evaluate proposals on the national level and the effects of bills on the state level. We are also in the early stages of launching a Medicaid expansion ballot initiative, a campaign I will be working on now that I have decided to stay on as a volunteer for another year.

I decided to do a second year primarily because I am fulfilled in my work at Missouri Health Care for All. In my role as Organizing Fellow, I spend my time having one-on-one meetings with people in the St. Louis area, getting their stories, engaging with them on the issues affecting them, and plugging them into the movement based on what they care about. I also plan events such as Health Care Story Shares, where people come together to talk about their experiences and learn actionable skills such as how to write an op-ed, build our base by tabling for new supporters, and plan in-district meetings where constituents connect with their representatives to talk about health care. All of my work revolves around the experiences of people in my community.

My favorite part of the work is Storybanking, which entails collecting health care stories by interviewing people; writing a draft of their story, which I send to them for approval; and then posting their story on our website and social media accounts. The stories can also be shared with approval with the media and with legislators to further expose the human impact of our health care crisis.

I have found, especially as a white person in St. Louis with the privilege of being on my parents' comparatively good health insurance plan, that the most effective and ethical role in the movement for me is a journalistic one. I am aware of the power of the position I am in as an organizer in a volunteer program within a larger racist, ableist medical system and activist culture. Even though I have an illness and personal experiences of my own to share and a great deal of empathy for the pain of hospitalization or the struggles of stigma, I am still able-bodied and white. For that reason, I do not feel entitled to lead a movement; rather, I want to use my access to amplify the stories of others through writing and widely communicating what I am learning about the inner workings of health care policy.

I had no formal background in organizing theory or practice before this position, and my co-workers have been a strong support system and resource for me as I have learned about community organizing. 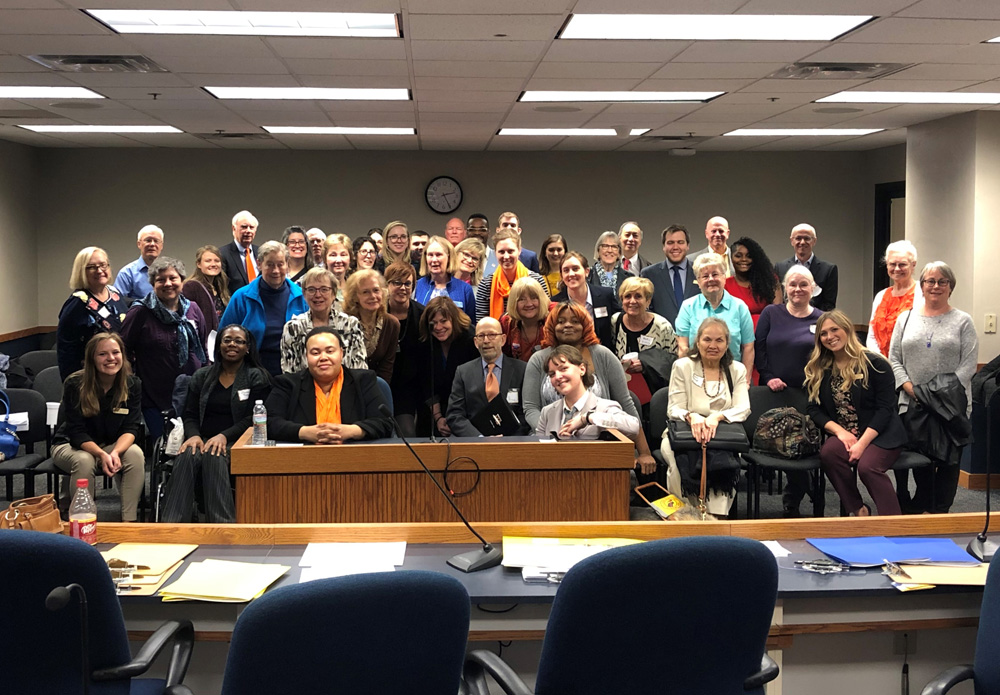 Our organizing director instituted an Organizer Media Project in which each organizer (there are five organizers, two organizing fellows from a service corps, and an organizing director) chooses a podcast, article, documentary or other form of media about organizing or health care and shares it with the group. Then, we discuss it on one of our daily conference calls. This process has brought our team closer and taught me about organizing, politics and health care through critical thinking and open discussion. We also have staff retreats a few times a year where we come together to discuss goals, new developments and areas for growth. Along with working with our supporters, one of the most formative aspects of my job is time spent learning alongside MHCFA staff.

Missouri Health Care for All has been an integral part of my political awakening and has increased my feelings of agency within the policy process. I am looking forward to seeing how we can grow as an organization and how I evolve as an organizer and plan to write more about MHCFA in the future.