South Sudan, a place of extremes, adaptation and hope 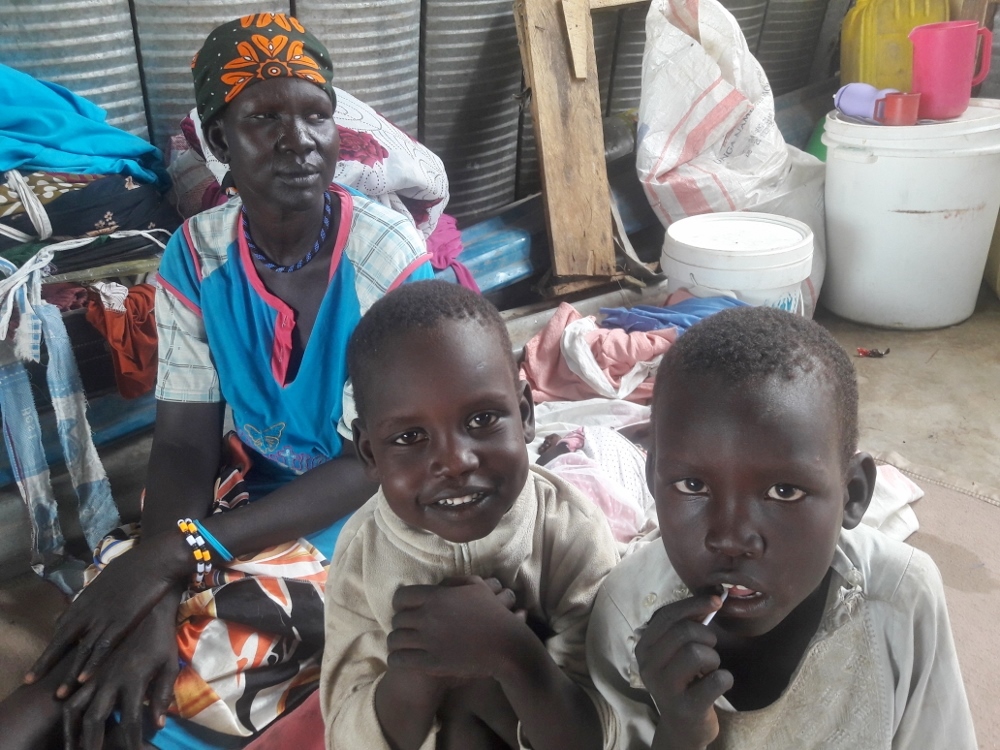 A South Sudanese family at a U.N.-run displacement camp in the capital of Juba. (GSR photo / Chris Herlinger)

Juba, South Sudan — Those of us who are not called to consecrated life but write about women religious may sometimes feel our spiritual tools are inadequate. We see the example of the sisters and think, "I cannot possibly match them."

But traveling in South Sudan on assignment these last few weeks, I think that may be viewing things with the wrong lens. In an environment of extremes — of civil conflict, war, humanitarian crises — the frailty and humanity of all people is more visible. And that includes the sisters themselves, who work in a country where just under half of the nation's 13 million people are believed to be Catholic.

Here, in the capital of Juba, sisters get frustrated by nonsense and day-to-day annoyances like anyone else, though their tolerance and patience are usually far higher than that of the average soul.

Still, even sisters sometimes utter an expletive. One sister and I shared such a moment three weeks ago when some reckless kid in a car almost sideswiped the vehicle the sister was driving. We both cursed him loudly, laughed at our infraction, and joked about the stereotype of sisters not cursing.

Another way of putting it: In the depths of pain and suffering in a country experiencing famine, civil war and persistent poverty, sisters embrace not only the moments of grace and hope but also embrace the frailties common to all people.

And in a place like South Sudan, it's no surprise that sisters aren't afraid to acknowledge that side of life. They don't have all of the answers; their work in the name of God is only a small part of God's love for South Sudan. 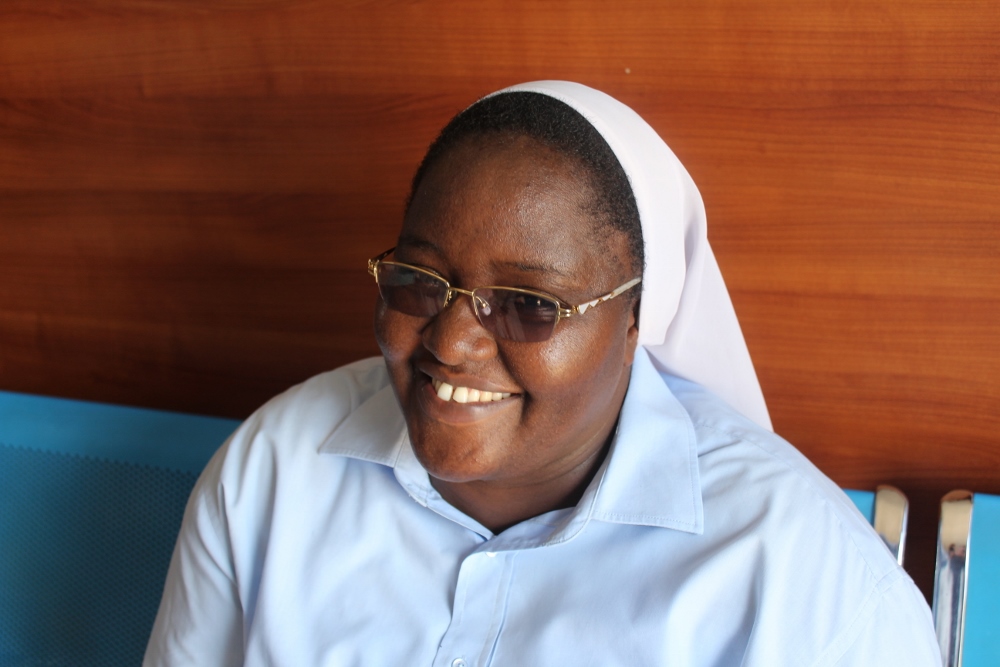 "We're not superwomen or supermen," Sr. Anne Kiragu, the superior for a small Daughters of St. Paul community in Juba, told me when I first arrived there last month.

Kiragu was a key contact for me when I visited South Sudan in 2014 during my first assignment for GSR. She has remained a good source of help — not to mention inspiration — since then. With her trademark humor, infectious laugh and love of the absurd, Kiragu is energy personified. Still, she acknowledges that being in South Sudan can wear a person out. Kiragu has been here four years now.

"We're not stones," she said. "We have feelings of fear and anxiety, too."

Still, Kiragu persists, and she remains steadfast in the belief that the work of women religious (as well as of men and of the church in general) is making a difference in South Sudan, even in the face of so many problems.

"We can't let go of that string of hope," she told me. 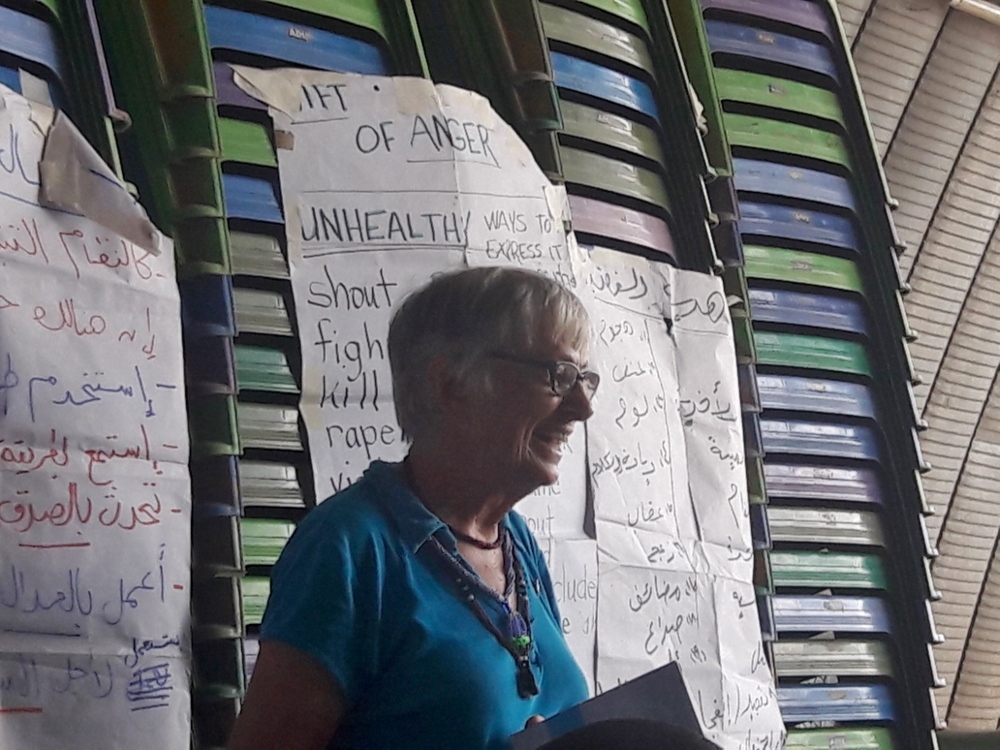 Sr. Barbara Paleczny, a Canadian School Sister of Notre Dame, works as a teacher and workshop leader with Solidarity with South Sudan, a coalition of religious congregations training teachers, nurses, midwives, local farmers and community leaders throughout the country. She travels in South Sudan presenting healing from trauma workshops, including one done recently at a displacement camp in the capital of Juba. (GSR photo / Chris Herlinger)

Paleczny's email signoff reads, "Lord, protect us from malaria, mosquitoes, snakes and scorpions, armed thieves and accidents, bullets and bombs, a collapsed economy," providing a glimpse of some of the country's hardships.

Paleczny believes a strength sisters possess is in knowing "that our 'roots' are elsewhere." That embrace of God and a sense that there is a reality beyond our immediate understanding gives sisters an insight into the vagaries of life.

"That makes the many challenges and inconvenience easier. The flight is canceled, and you're at the airport for a day," said Paleczny, who travels the country running workshops to help survivors heal from trauma. "And then the next flight is canceled again. You learn to adapt."

In the coming weeks, I will be telling some of the sisters' stories from South Sudan and the stories of brave and patient South Sudanese who remain committed to the ideas of peace, stability and a better future. This despite a present moment that has given many only dashed hopes and broken promises — the equivalent of bitter ashes in the mouth.

In all cases, the stories are of human beings — frail, vulnerable and imperfect — who are not naïve about their fellows and certainly not naïve about conditions in South Sudan. But in the particular case of the sisters, the women I met bring to the present moment courage, persistence and hope for the future, no matter how difficult things can get.

"I don't think the present situation will be permanent. I think it will change," said Sr. Mary Faida, a South Sudanese sister and member of the Sacred Heart Sisters. "God is present." 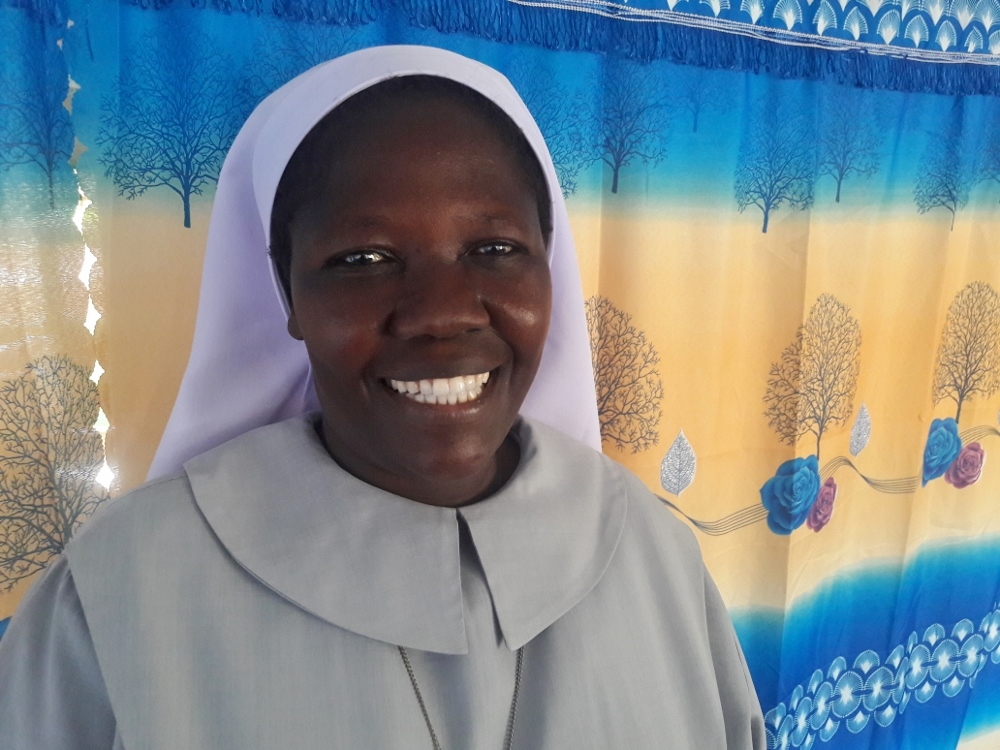 "I don't think the present situation will be permanent. I think it will change," said Sr. Mary Faida, a South Sudanese sister and member of the Sacred Heart Sisters. "God is present." (GSR photo / Chris Herlinger)

South Sudan, a place of extremes, adaptation and hope

In civil war, soldiers are the wild cards -- and tough to access