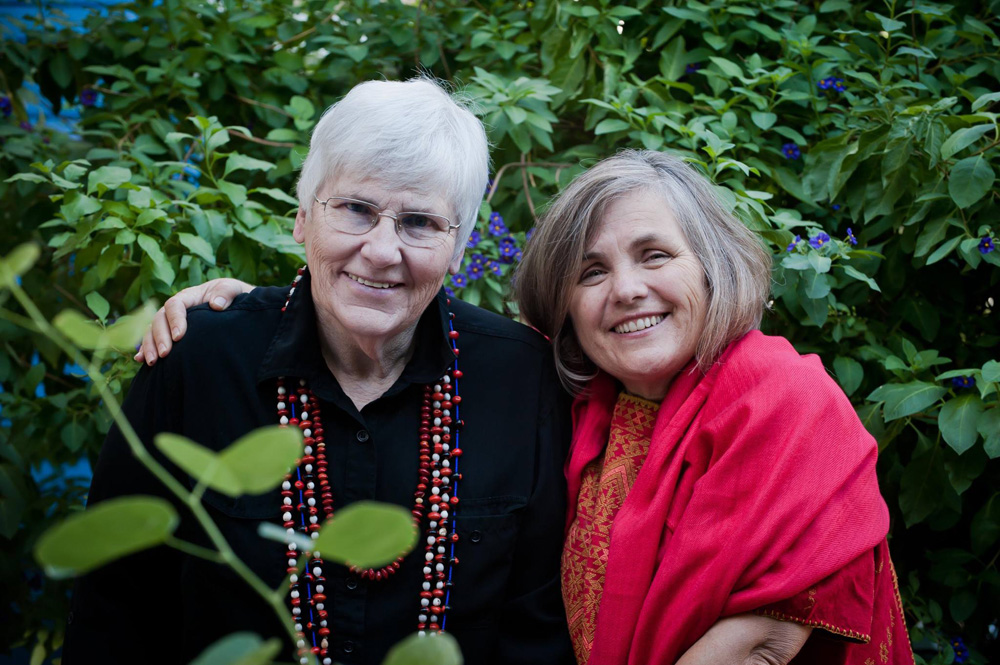 Judy Bisignano grew up in an abusive home in Des Moines, Iowa. Her father was a good provider but an alcoholic. Judy's deepest secret was that her mother beat her, almost every day. When her mother hit her, she would strike back in some way.

Her misery led her straight to the Adrian Dominican Sisters who lived just five doors down and taught Judy in school. They encouraged her, and she witnessed and absorbed their kindness. She entered the community in 1960 as a way to escape her mother and avoid a marriage like that of her parents at any cost.

Seeing Sister Judy's film and reading her memoir can be of cathartic value to the senior sisters among us, or to anyone with anger management issues stemming from trauma and who seeks to heal memories. To those considering religious life, her story can help one discern motives for choosing to follow a religious vocation. The film sheds light on religious life in the United States in the 1960s in particular; some of the historical photos and footage reveal details of the bygone era of the post-World War II boom experienced by religious communities in the United States.

There were 122 postulants in her class, the largest group the Adrian Dominicans had ever had. Judy thought she would be among sisters like those who lived near her. Instead, she came under the authority of a draconic postulant mistress who shouted rules and imposed silence and humiliating penances. This is not what Judy had ever expected; to her, the postulant director was worse than her mother, and the pre-Vatican II disciplinary practices of postulancy and novitiate were worse than home.

Yet she stayed. She kept in mind the gentle sisters who taught her for 14 years and knew that life in the novitiate was not the real Adrian Dominican life. She was attracted to the congregation's response to the civil rights movement and other social issues of the decade. She could not reconcile their social justice ministry with the injustice she experienced during initial formation. The situation added to the anger arising from her family life that she tried to bury. 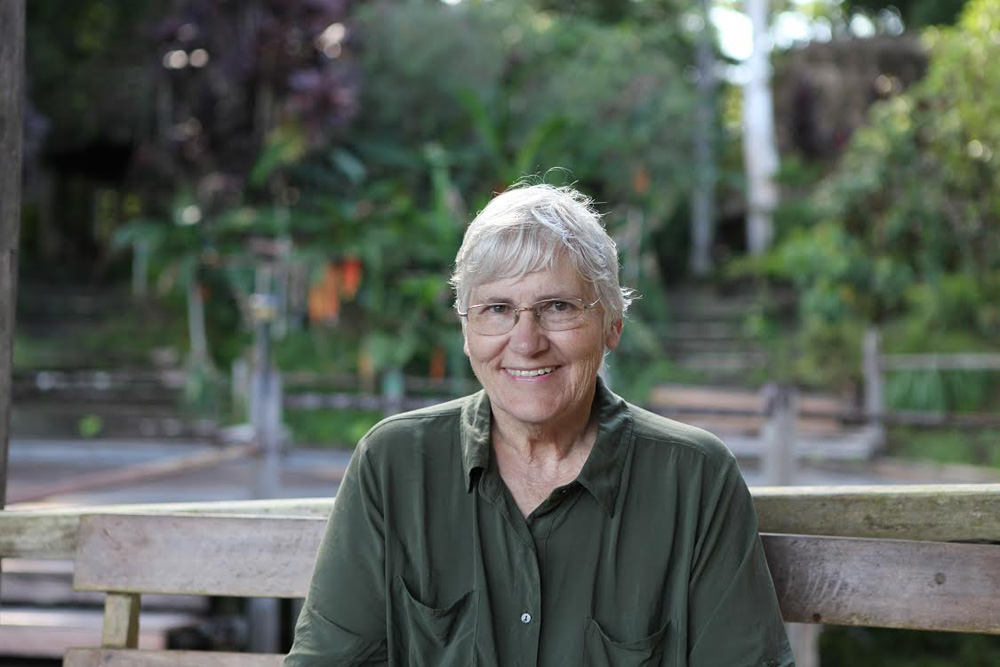 Sister Judy in the Kapawi village in the Amazon River basin near the Peruvian border. (Sophia Lyn Sims)

Not long after she entered the novitiate, Judy complained of double vision. The novice mistress, who must have sensed Judy's resistance to the rules and authority, arranged to have Judy placed in a mental institution for six weeks instead of seeing an eye doctor. It was a terrible injustice by the sisters and doctors to commit an 18-year-old in an asylum where she could not leave. She did everything she could to avoid taking medications and shock treatments that were the norm in the institution. By missing more than 10 days of her canonical novitiate, Judy had to begin the novitiate again.

As she neared completion of her second attempt at finishing the novitiate, the novice mistress sent Judy to the doctor for a physical; she would not be allowed to make profession unless she passed. He found a node on her neck and it turned out to be thyroid cancer; indeed, double vision is a symptom of this disease. Judy had to have surgery and leave the convent, and the time extended over the 10 days allowed. After surgery and now out of the community, she joined the Papal Volunteers and worked in Mexico for a year. She then began college back at home in Des Moines. At the Christmas break, she received a letter from the Adrian Dominicans inviting her back to begin her novitiate again for a third time.

Her sister, Mary Kay, had entered the community of the Sisters of Charity of the Blessed Virgin Mary with a dispensation because she had cancer. Mary Kay died at the age of 23; Judy was allowed to visit her for several days before her death. 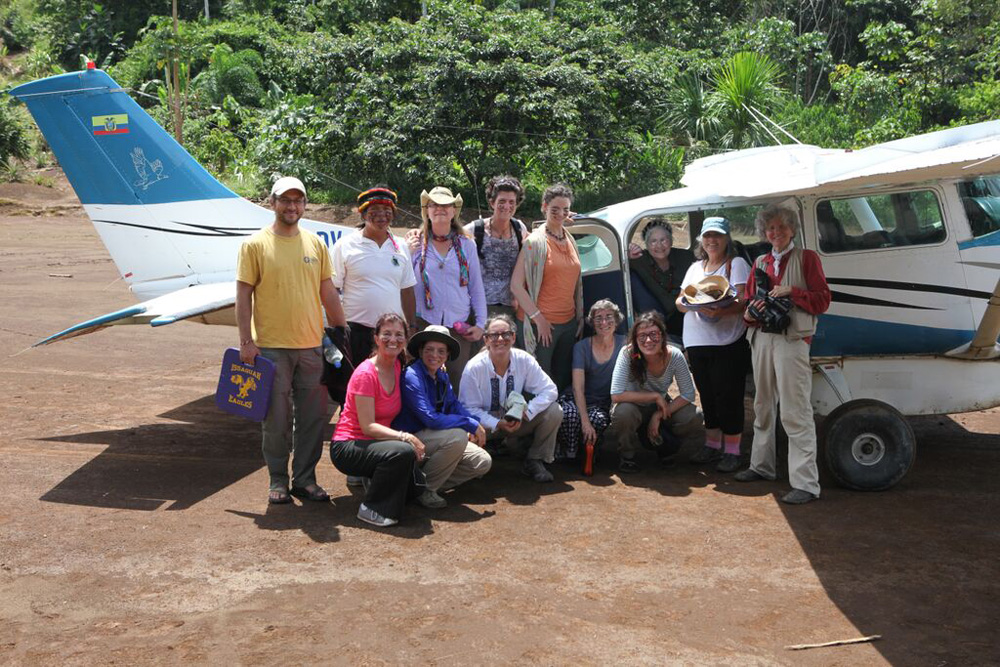 After first profession Sister Judy was missioned to Tucson, Arizona, where she taught and went to college, earning two master's degrees and a doctorate. She started the Kino School there, and for more than 20 years, it was a successful one-room K-12 school on 10 acres of land. The educational methodology was based on that of A.S. Neill's Summerhill School, which viewed learning and life as one. Yet, after a child was kidnapped from the premises (later found unharmed), Sister Judy was willingly "fired" by her own board: Someone had to take responsibility for what had happened.

She went on to found the Cesar Chavez Learning Center, a charter school that gave older students skills as it raised their reading scores from primary to high school levels. The school district was displeased, though, because students were not passing the standardized tests. She brought in a communications specialist, Sandra Morse, to work with her staff on collaboration. Morse quickly observed that the staff was fine but that Sister Judy was the problem. 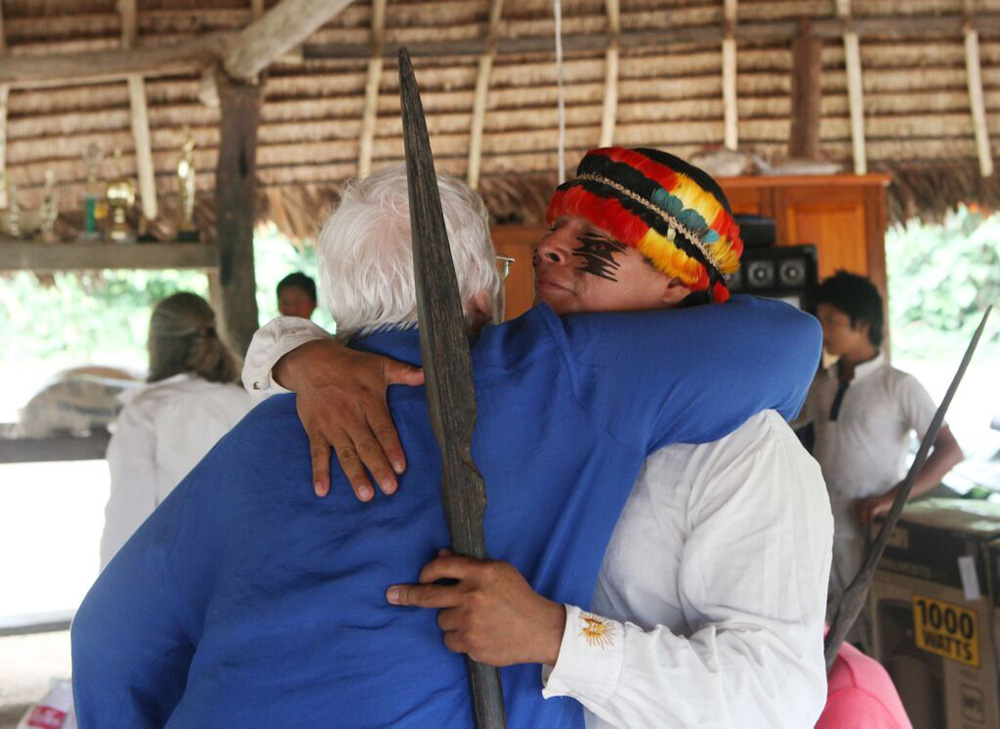 Sister Judy's life of accomplishment was constantly subverted by her own actions. She was perpetrating on students and staff her unresolved anger stemming from childhood trauma that had been reinforced in her early formative years in religious life.

The first time I watched the 20-minute documentary "Sister Jaguar's Journey," I wept. I cried for Sister Judy's pain and for some of my own. Although I entered the convent in 1967, some of the formative methodology was very similar to what Sister Judy experienced. I can only imagine that others have had similar experiences. Thank God that over the years, as psychological testing became required before acceptance into the community (and therapy sometimes recommended), human formation improved, formators received better training, and Vatican II's teachings were integrated into formation and lifestyle. Religious formation evolved for all communities, some taking more time than others.

This brief documentary film is beautiful, interesting, informative and moving. For those with a romantic idea of convent life, Sister Judy's story may be shocking. The film serves as an introduction to Sister Judy's in-depth and most readable, self-published memoir, Sister Jaguar's Journey: A Nun's Ayahuasca Awakening in the Amazon Rainforest. You can watch the film online for a small fee on Vimeo on Demand via her website, sisterjaguarsjourney.com. 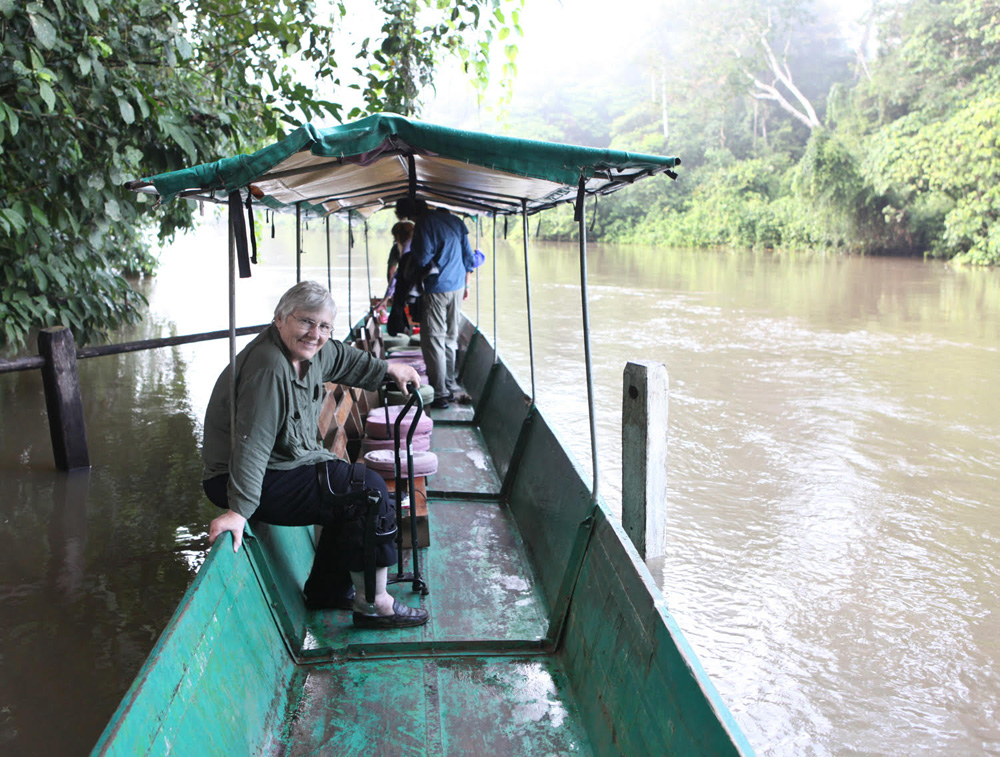 Sister Judy Bisignano going to a village during her trip to the Amazon rainforest. (Sophia Lyn Sims)

I had never heard of the "ayahuasca" plant before; using it would be considered non-conventional by Western medicine. Yet it helped Sister Judy, playing an important role in her healing.

After realizing that her unresolved anger had been driving her all her life, Judy accepted an invitation from Sandra Morse to accompany her on to a visit to the Amazon forest of Ecuador. For Sister Judy, meeting the indigenous Quechua people and learning to more fully appreciate the earth and the environment was the beginning of her healing. She drank a tea, "spiritual medicine," made by a shaman or healer from the entheogenic ("generating the divine within") ayahuasca plant that has psychoactive properties. The experience rocked her soul. She saw the faces of each student she had ever taught and sensed their forgiveness; she realized she had communicated something more to them over the years than her bitterness.

Sister Judy got the name "Sister Jaguar" because when she was in a boat on the Amazon a jaguar jumped into the water near it to catch a bird. It was a surprise and a gift to encounter this rarely seen majestic animal, and the people gave her the name.

It's a miracle that Sister Judy remained in religious life and, in some respects, that the Adrian Dominicans ever invited her back. But they did. It took Judy more than 60 years to grow into the woman of God she has become. Her book and the film show that religious life and the following of Jesus require discernment, hard work and forgiveness. 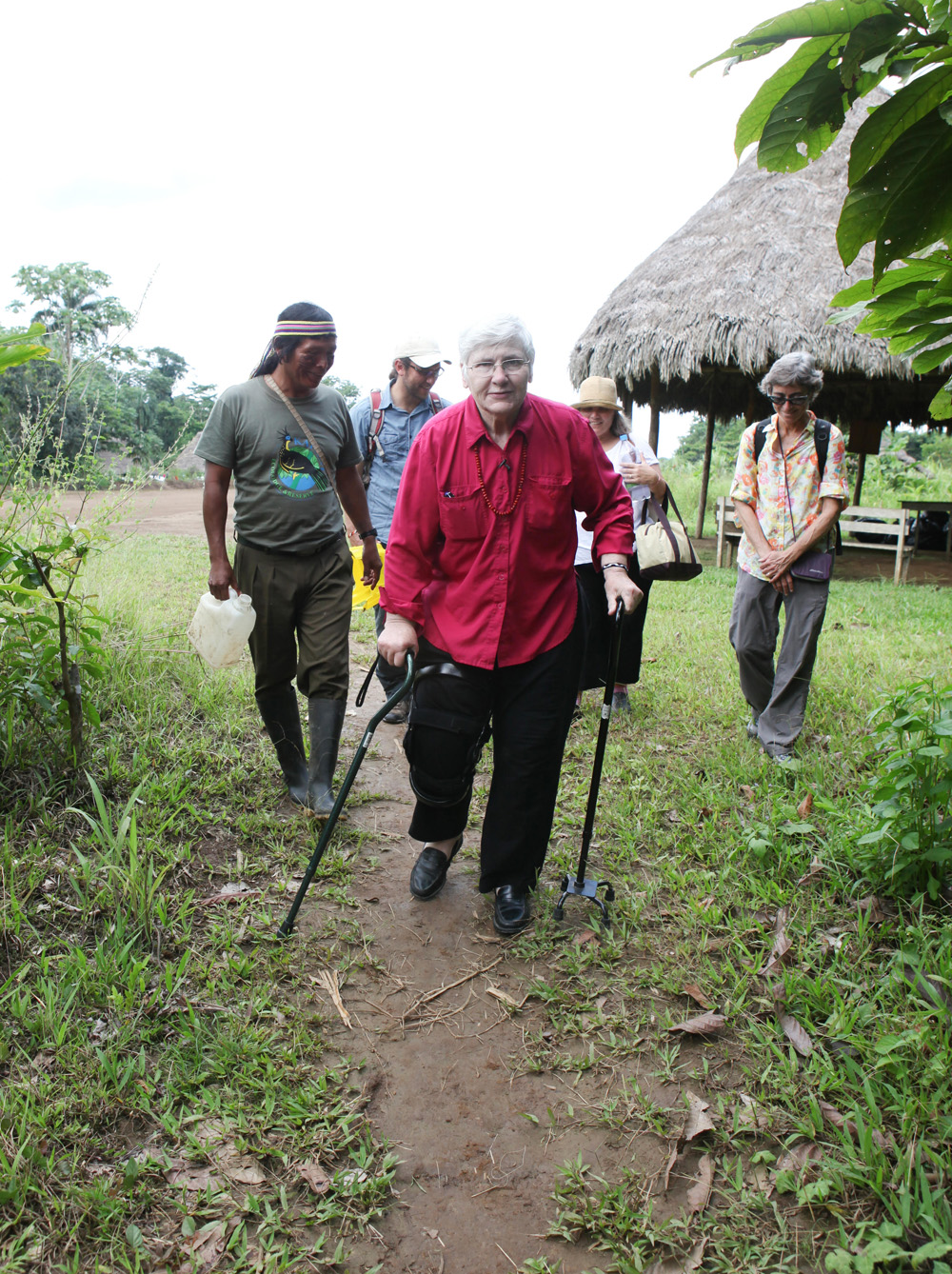 Julian Larrea, the Ecuadorian guide from Quito, helps Sister Jaguar get to the canoe to go to the next village. (Sophia Lyn Sims)

Despite everything, her voice in the film and in print has a wise, transparent, humble quality about it; she sounds free and loved by God.

"Sister Jaguar" now lives in retirement in Tucson. She spends her time writing, reading, meditating and studying cosmology. She keeps up on environmental issues and solutions impacting the Achuar and the Amazon River basin. She struggles with her health and walks with the aid of a cane; five years ago, she broke her leg, and it refuses to heal. As her friend Dar Dowling told me, she "refuses to be an invalid and calls herself the ‘three-legged jaguar' as she continues to roam the planet through her dreams, prayers and writings."

The Lost Coin: A lesson in compassion

Do what you're inspired to do