Spirituality and belief in the face of sorrow

by Lauren Magee
Spirituality
This article appears in the HIV/AIDS Ministry and Notes from the Field feature series. 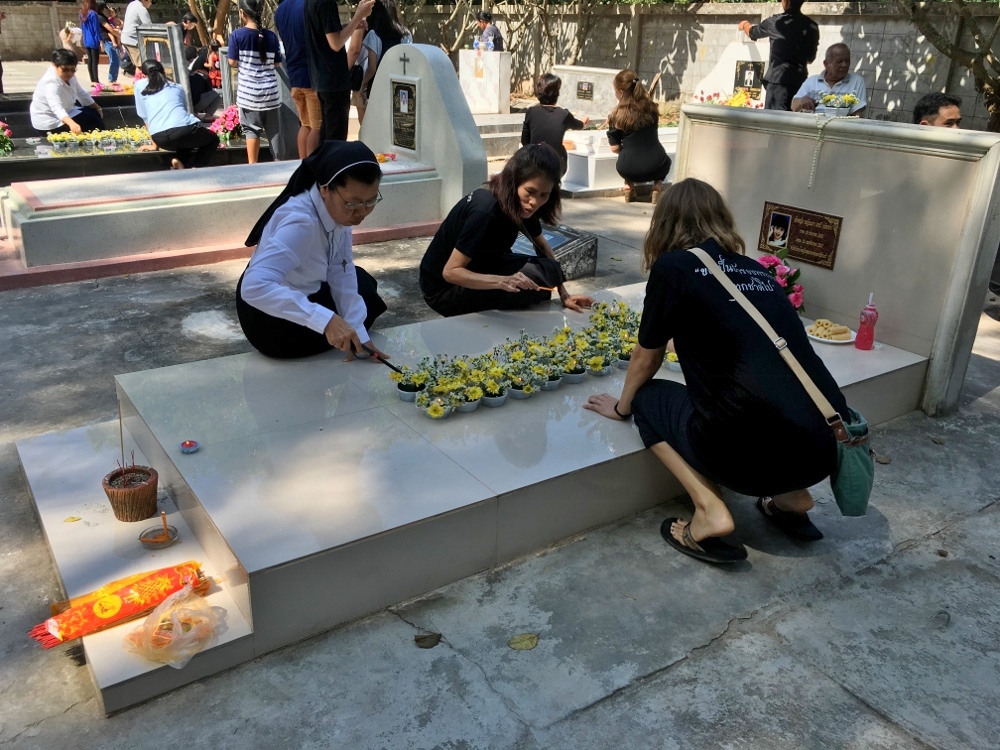 Women light candles alongside offerings of food and flowers at an annual memorial held at a Catholic cemetery near the Garden Community in Nong Khai. (Lauren Magee)

Nong Khai, Thailand — Notes from the Field includes reports from young people volunteering in ministries of Catholic sisters. A partnership with Catholic Volunteer Network, the project began in the summer of 2015. This is our fifth round of bloggers: Katie Delaney is a Good Shepherd Volunteer with the Fundación Madre Josefa (Mother Joseph Foundation) in Santiago, Chile, and Lauren Magee is a Good Shepherd Volunteer at Hands of Hope, an income generating project that provides dignified employment for villagers living with HIV/AIDS in Nong Khai, Thailand.

Nong Khai, Thailand, is a rural town with abundant farm land. I live a bike ride away from the town's center, but those I live and work alongside have become my entire world. It may appear as a confining bubble, but I feel perfectly content within these walls.

I live in a community that in Thai is the บ้าน สวน, which we loosely translate in English to "Garden Community." The Volunteer House is alongside the Care Center and the Life Center, which houses an average of 30 patients, all with unique needs and varying degrees of ability. Additionally, there are eight cottages on the property that house some staff and families. Although I work at Hands of Hope during the day, my life seems more intertwined with those I share this living space with.

Some of the women in this community complete the 10-minute commute to Hands of Hope with me daily. The centers in the Garden Community and Hands of Hope both support those living with HIV/AIDS but look very different in practice. The Care Center and Life Center provide physical and emotional aid to those restricted by illness.

Hands of Hope was established as an income-generating project for HIV-positive individuals seeking employment but facing discrimination in the workforce and in their villages. Each individual employed at Hands of Hope, which we term our "producers," contributes to the production of handcrafted saa paper goods and receives a fair wage for their efforts. 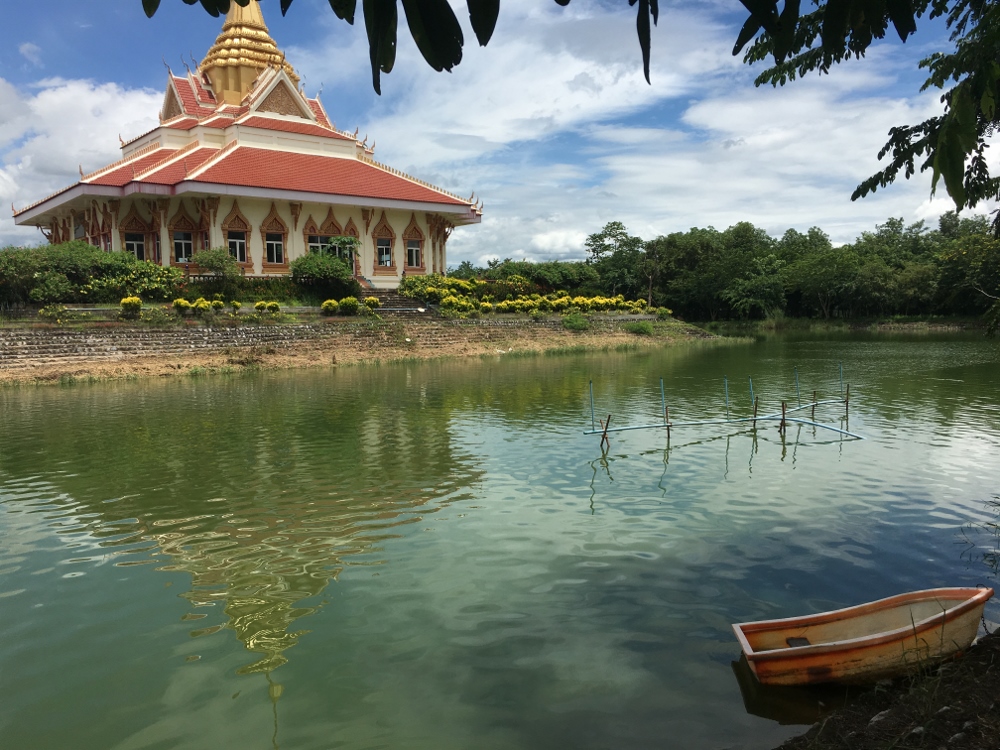 A traditional Buddhist temple where cremation and many other ceremonies are held in Udon Thani, the nearest city to Nong Khai. (Lauren Magee)

I was warned before I arrived that the community was more fragile than most and that loss was common, if not expected. Every volunteer before me had experienced multiple patient deaths, and chances were I would, too. I still couldn't help but hope that my experience would be a rarity and that every patient and producer was strong enough to overcome any health limitations. It's a role that I gave myself: to remain positive even when faced with tragedy.

In the past seven months, a handful of people have passed away, but none have struck the community as hard as our most recent loss. A week ago, a beloved member of our Garden Community passed away suddenly in the night.

She came to the center three years ago, struggling with HIV and the trauma of being exploited in Pattaya, the world's largest red-light district. She began as a patient in the Care Center, but by the time I arrived, she had moved up to supervising the teen girls who live in one of the cottages.

She was always quick to help others: running errands for those less able, feeding patients who needed assistance and offering unconditional friendship to everyone who entered our gates. She had lost contact with her biological family members but was quick to adopt the garden as her home.

Her condition seemed to worsen over the past couple of months, and even after a few hospitalizations, no one could discern the cause of her symptoms. We all knew she was sick, but she was still getting up every day and smiling as she greeted us, so I thought it must not be that bad.

As humans, we are constantly making judgments, whether we mean to or not. I realize now that I had been grouping patients by the perceived severity of their cases. This patient's death shook me because I hadn't prepared myself for it and couldn't make sense of it. 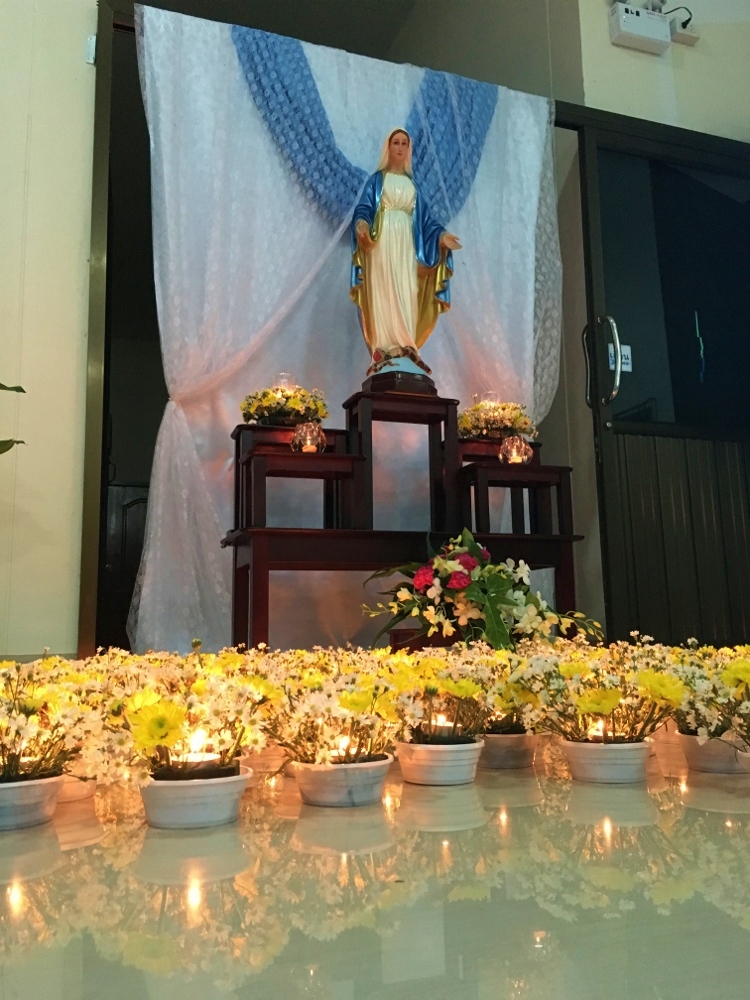 Many women in the Garden Community, Buddhist and Catholic, have a strong connection with the Mother Mary and derive comfort from her presence. (Lauren Magee)

As a mathematician, I see patterns all around me, and I pride myself in finding reasonable solutions to problems. I can't accept that someone is gone when a cause can't be determined.

In the days leading up to the cremation, I searched for answers. I questioned our staff and the patients close to her, trying to uncover any evidence that would help me develop some closure. I also became critical of how everyone else was coping. There was a deep sadness impressed upon all of us, but an eventual acceptance quickly evolved, which frustrated me the most. I felt alone in my battle to find a logical explanation as to why this had occurred.

Thailand is 95 percent Buddhist, and culturally, they put their trust in fate. I see a peacefulness in their ability to move beyond harsh realities and submit themselves to the seemingly random ways of the universe. They welcome the path that has been laid before them, because each stepping stone, in this life and all the rest, leads to enlightenment. I find no comfort in uncertainty, and American culture has instilled in me a need for control. I want to be in charge of my own destiny and believe that I have free will.

I arrived at the cremation, wearing my smile as a veil, hoping it would conceal the fear coiling within me. I was scared to return to the community without her, and I was scared of who might be taken next. But as I sat praying alongside my Garden Community, chanting filling the temple's space, and it became clear that everyone was hurting.

Death is difficult, no matter your culture or religion, but the difference between us was faith. Their faith was carrying them through the agony, and I was stuck in it, unable to rely on anything besides myself.

The past few years, I have deeply struggled with my spirituality and have developed a strong skepticism to anything that defies reason. I do still see an importance in evaluation, but I'm beginning to recognize the times when all you have to do is have faith. Trust that you are where you need to be and doing what needs to be done. 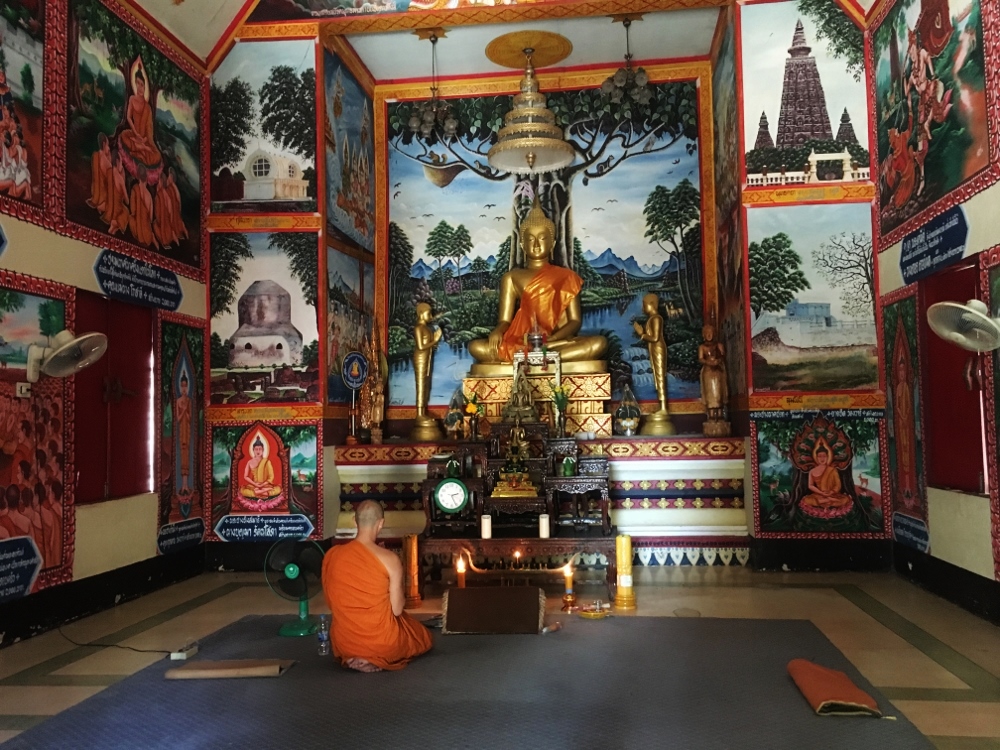 A Buddhist monk prays inside of a village temple in Nong Khai. Every village has an accessible temple with walls that usually depict stories of the Buddha's many different lives. (Lauren Magee)

May God expand our too-small hearts