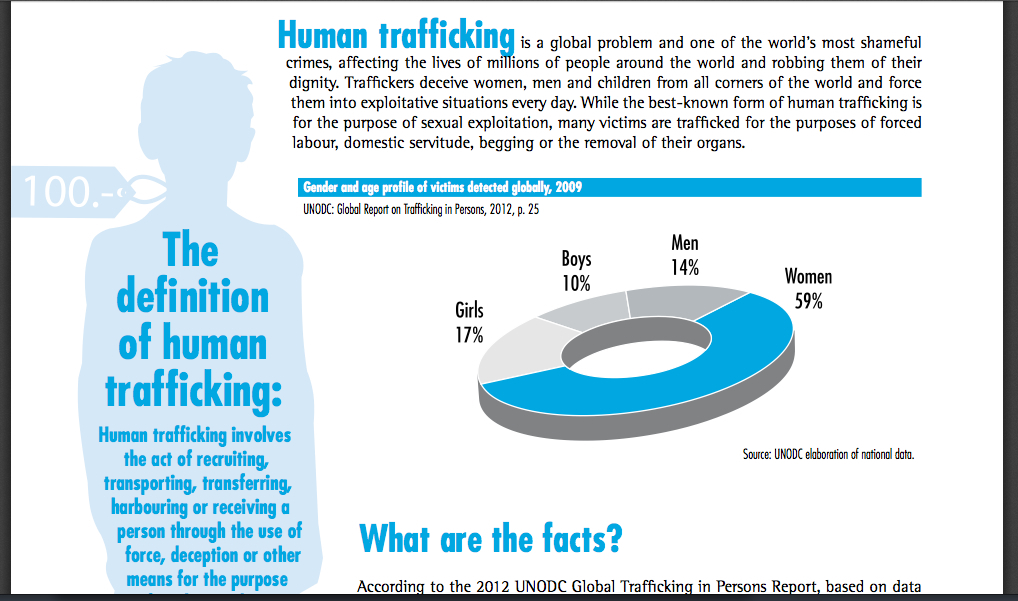 Clip from facts flier by the United Nations Office on Drugs and Crime.

By launching the social media campaign #igivehope the United Nations marked the first ever World Day Against Trafficking in Persons on July 30. While also bringing awareness to the growing crime of human trafficking, this day was intended to show solidarity toward victims of trafficking. At any given time, there are 2.5 million victims trapped in contemporary slavery, according to the U.N.

The wisdom of a social media campaign is the ability to bring a problem that seems very far away to our everyday communication and our computers and mobile devices. While my own Twitter newsfeed did not show a great amount of activity using the #igivehope, I did see a few tweets alerting me to the campaign, including this one article from International Business Times listing the countries that are most susceptible to trafficking crimes. It identified Bangladesh and Haiti as places where young women are especially at risk for becoming victims of sex trafficking and Pakistan as a place where labor trafficking is predominant in brick-making and agriculture.

If you missed yesterday’s campaign or you don’t have a Twitter account you can still catch up on the activity by clicking on #Igivehope, which shows even this morning advocates for victims are still sharing stories, information and resources to help victims. Download the U.N.'s facts flier for World Day Against Trafficking in Persons.

Trafficking is one of Global Sisters Report's main coverage topics; you can click here or on the trafficking tab at the top right of this post to read what we've reported on so far.

Warning girls about the tactics of human traffickers