The flashing multicolored fidget spinner that closed last year's annual gathering for the Leadership Conference of Women Religious reappeared at the opening of the 2018 assembly, held Aug. 7-10 in St. Louis.

When Sr. Teresa Maya, a Sister of Charity of the Incarnate Word, first flashed the palm-sized gadget to the conference last year as the new president of LCWR, she promised the presidential trio would go into the year working in unison to produce colorful results. Flashing it again on the first day of this year's assembly, Maya illustrated a promise kept.

The four days in St. Louis addressing a broad spectrum of topics — Trinitarian theology, racism, love, communion and more — was a demonstration of what happens when almost 800 sister leaders gather in one place. The assembly provided renewal for the responsibilities facing leadership and included contemplative pauses to reflect on the theological speeches and moments of action through a silent protest against racism.

Global Sisters Report provided coverage on every day of the assembly. Yet from our vantage point on the sidelines, there's still more to share. Here are a few more notable observations.

As an example of inclusiveness, a translator in the back of the ballroom made sure sisters in a French-speaking community from Montreal, the Sisters of Providence, could follow along.

Sisters shared how their communities are addressing racism, and others reflected on the keynote speeches that challenged them as leaders. More than 60 sisters in the fight against the death penalty gathered in a lunch session to brainstorm how to better organize as a network.

Sisters regularly broke into reflection groups following sessions and addresses, with a sister designated as each group's "listener" to share what had come up with the rest of the assembly.

On behalf of a group of international communities, one sister said, "As our ranks become diverse, diversity becomes a reconciling force," one that was palpable in the room where they had chatted.

Another sister said she thought back to how Mary simply said "let it be done" when she was asked to bear the Messiah.

"She didn't have a strategic plan or a game plan; she trusted that what needed to be done would happen with her, through her, and for her, for something larger than herself," she said, adding that women religious are sharing that moment. "We can say 'fiat' as the spirit of God, we can bring life to the world."

GSR also asked sisters to reflect on what they heard and how it applies to their communities.

Immaculate Heart of Mary Sr. Margaret Chapman said her congregation and the Oblate Sisters of Providence have formed an Undoing Racism committee that plans regular workshops and conferences, an effort inspired by the exile of their shared Haitian-English foundress, Mother Theresa Maxis Duchemin.

"We have been complicit" in failing to acknowledge Duchemin's role in founding the congregation, Chapman said, "and we have had to deal with that. It's probably one reason we have not been successful in welcoming persons of color to our community."

She said about half a dozen African-American women have joined the Sisters of the Immaculate Heart of Mary in the last 20 years.

"We've had some that have come who have not stayed for various reasons. But truth be told, some of them are probably because of if not overt racism, then somehow underneath," she said.

"It's an incredible challenge, one that I think practically every community in North America has had to deal with," Chapman said, adding that the sisters have to "ask ourselves hard questions: How open are we? How welcoming are we? How willing are we to change and be changed by a culture that's not our own?"

"Authentic completion can only happen after this blessing, which will inspire, encourage and empower them to continue the dream of transformation that we have dreamt with such passion the last 50 years."

A collaborative fight against the death penalty

Among the side meetings that filled break time throughout the assembly, a number of organizations hosted seminars during lunch hours, including Catholic Mobilizing Network, which hoped to establish state-to-state contact between sisters advocating against capital punishment.

Krisanne Vaillancourt Murphy, the network's executive director, and Comboni Missionary Sr. Ilaria Buonriposi, who is in charge of the network's Latino outreach, brought more than 60 sisters together to share their experiences in this ministry and brainstorm ideas to get better organized.

One sister discussed the 2014 execution of an inmate she worked with, Jeff Ferguson, who was found guilty of raping and murdering a 17-year-old girl in 1989 in suburban St. Louis. The sister taught in a prison where Ferguson as an inmate helped with a program that administered high school equivalency tests for a GED diploma and started a hospice program.

"No man should die by himself," the sister recalled Ferguson saying.

While the girl's father had been a strong advocate for Ferguson's death before the execution, a documentary that chronicled Ferguson's life and execution later inspired the father to get involved in restorative justice groups, the sister said.

Sisters from the communities of Sr. Paula Merrill and Sr. Margaret Held also shared what it was like to publicly forgive the man convicted of murder in their deaths. Rodney Earl Sanders pleaded guilty June 21 to killing Merrill, a Sister of Charity of Nazareth, Kentucky, and Held, a School Sister of St. Francis of Milwaukee, in their Mississippi home in 2016.

Sr. Susan Gatz, president of the Sisters of Charity of Nazareth, said that at Sanders' hearing, "we were able to face him and address him and say what we wanted to say to him: 'Here's how wonderful these women were, you didn't even know them, here's the pain that's caused to the family and communities and the communities they served, and we forgive you.' "

They also asked Sanders to use the rest of his life "to get right with God," another sister added. He was sentenced to two life sentences without parole, plus 30 more years for burglary and car theft.

Murphy said Catholic Mobilizing Network is the "only national faith organization that has this emphasis like we do," and because Pope Francis revised the catechism to stand against the death penalty, "is this the time and place for us to dig in and help to leverage the voice of Catholic religious women?"

The same day as Catholic Mobilizing Network's lunch, Tennessee executed a man with severe mental illness, Murphy noted — the first execution that state had carried out in nine years.

Another sister from Nebraska later requested prayers for a man her state was about to execute. With the backing of Nebraska's Catholic governor, Carey Dean Moore was executed Aug. 14 using a previously untested drug, the state's first execution in two decades.

The group discussed forming a Death Penalty Advocacy Council using the network's infrastructure (resources, media, offices and partnerships) to create a collective voice in the fight against the death penalty.

"If Catholics are against [capital punishment] and they see sisters mobilize and stand together, it could be influential," one sister said, suggesting that sisters wield the "clout that comes with sisterhood." 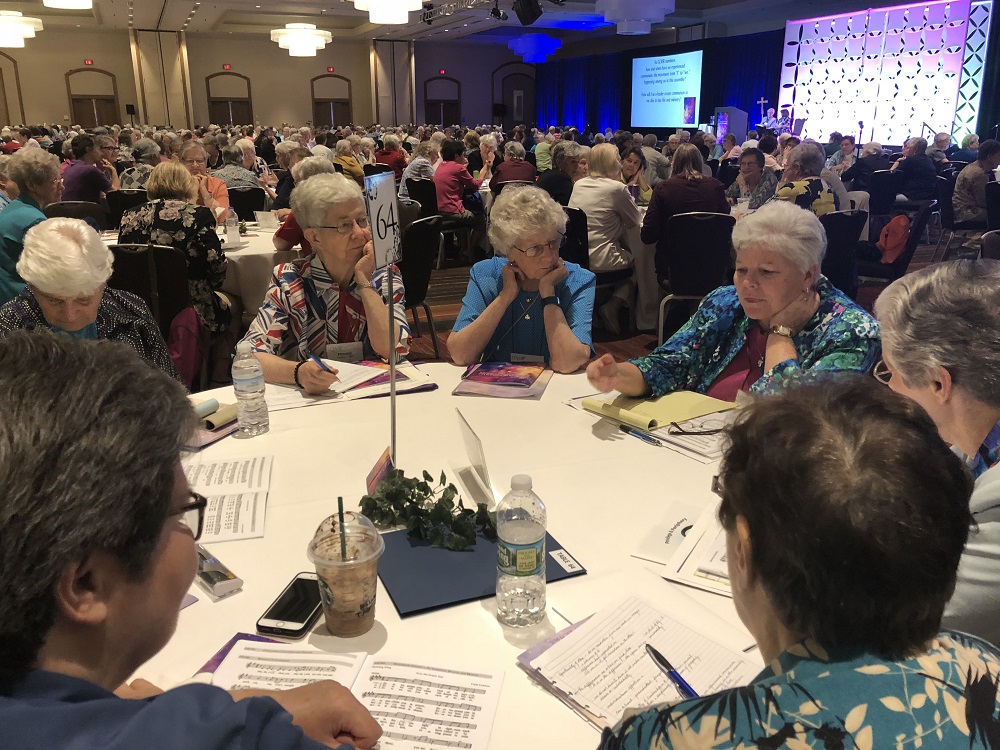 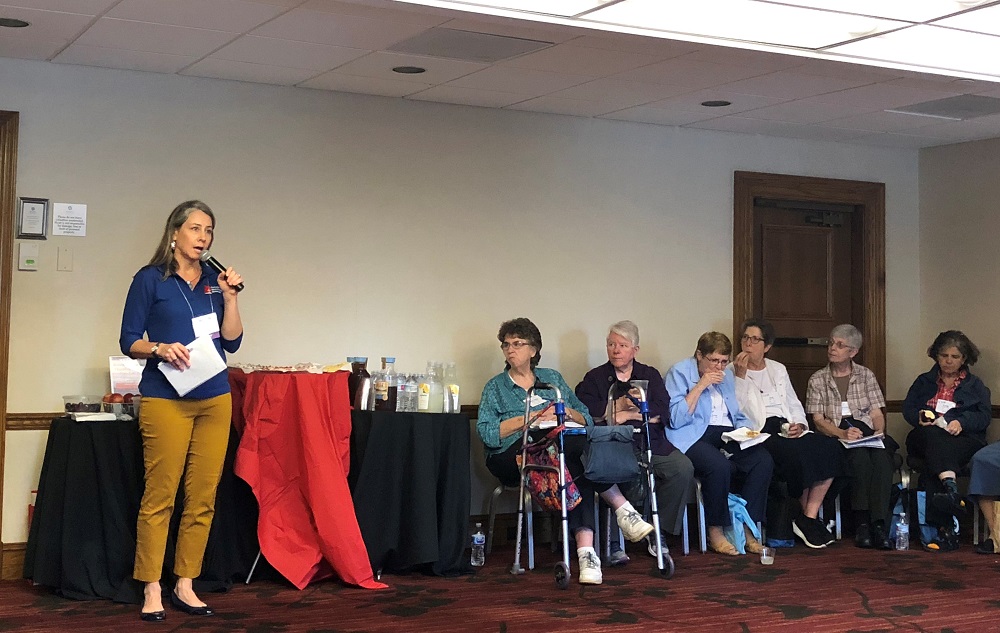 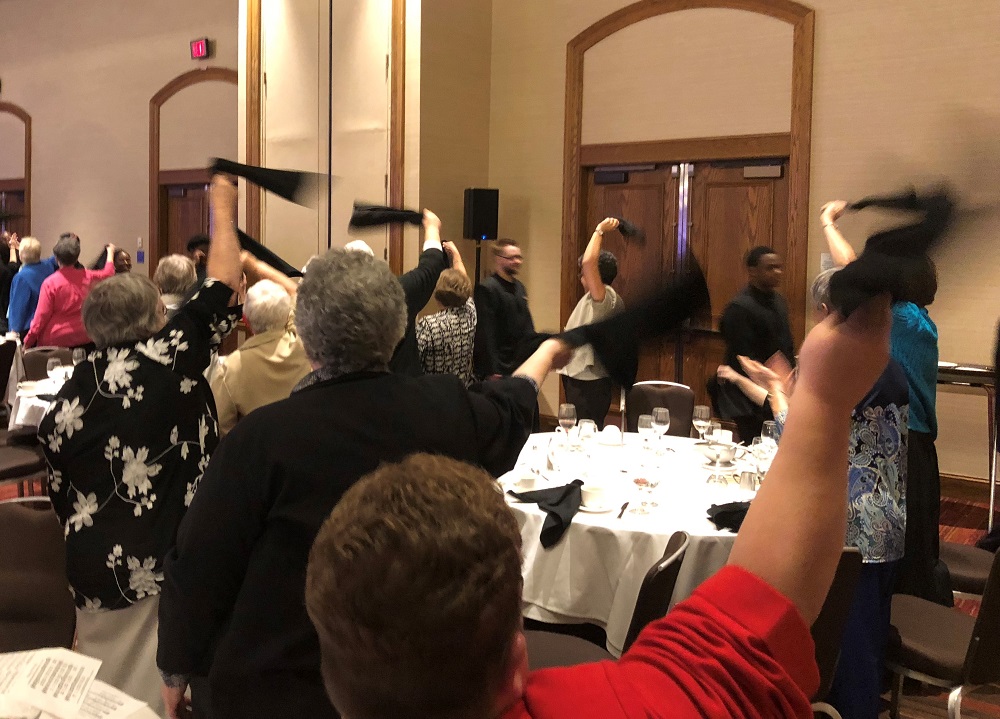