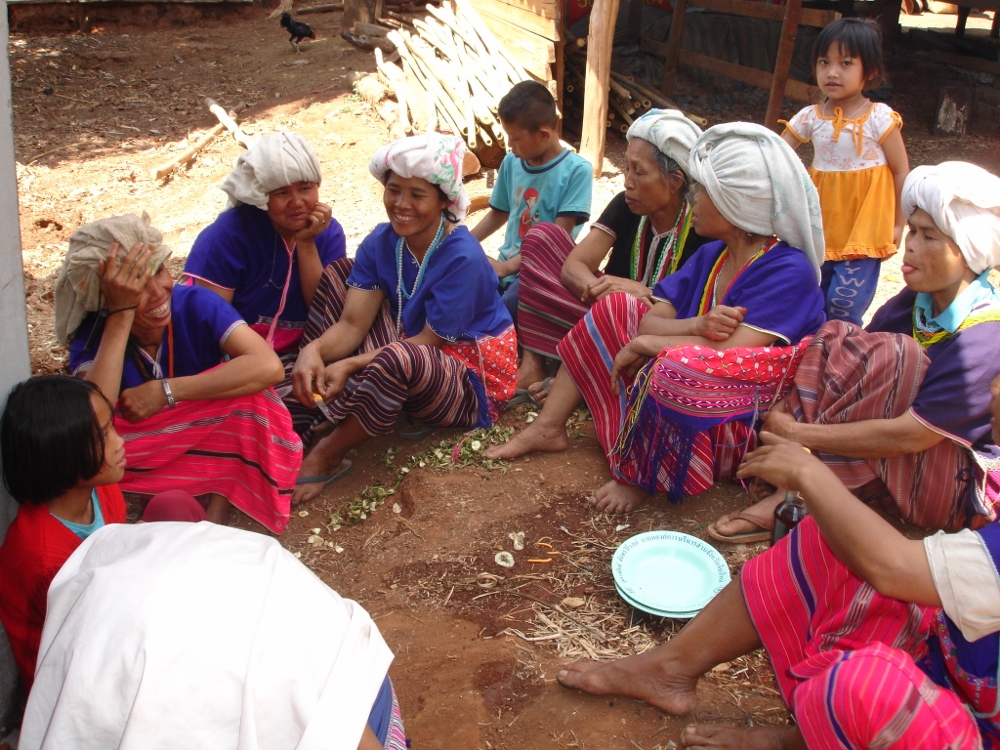 In traditional Karen dress, unmarried women wear white headscarves. These are some of the students who board with the sisters while attending school. (Provided photo)

I never dreamed I would be meeting Karen (Kah-Ren) community members from Myanmar (Burma) in Aberdeen, South Dakota. I had met families in a mountain village of Thailand a few years ago, so when I learned that this community was settling in Aberdeen, I asked Sr. Myra Remily, our congregation's outreach liaison for families, to introduce me to Mark Klumph, the training coordinator at Molded Fiber Glass. This plant is where the majority of them — about 150 — work, on the production line and as translators, manufacturing blades for wind towers that are sold all over the world.

These families are political refugees, escaping from village raids by the military that is determined to rid the country of the Karen. There is a long history of conflict between the military government and this community. Conversation with them included stories about escaping in terror and living sometimes for years in refugee camps on the Myanmar/Thailand border. Ti, Ba and Pa all responded with similar answers when I asked them why they like living in Aberdeen: First of all, family. These three had migrated to Aberdeen from other places in the U.S., and coming to Aberdeen reunited them with family members separated through the immigration systems. Other reasons for their joy included education — not only for their children, a high traditional value for Karen, but also for all of them as they study English and work for their GED. They are thrilled to have jobs, houses, money to live on and most of all and most important to them — safety. They laughingly told me they never dreamed of ever driving a car; they lived in the mountainous jungles of Myanmar and walked everywhere.

A number of the families in Aberdeen are Baptists, and I later learned that is the largest Christian denomination in Myanmar. The majority of Burmese are animist/Buddhist. Nearly every village it seems has a monastery that is for prayer but also for education. The monks are both religious and civic leaders.

I met Karen women religious in 2008 on a visit to Thailand while working for the Hilton Fund for Sisters. The sisters lived near our Presentation Sisters from India and the Philippines who engaged in pastoral work in a mountain area called Fang. Our sisters and the Karen had become friends in Chiang Mai, a major city of that region. Sister Salome assisted the sisters in preparing grant requests for water development for their new convent and for English studies.

Sister Siriphon, the superior of the Missionary Sisters of Mary Immaculate Conception, or locally called the Mae Pon Sisters, took me to visit one of the villages where the sisters work. The area is mountainous and forested. It was a delight to visit the families in their own settings. After a church service we had dinner with one of the families living in the traditional house of bamboo with a thatched roof. The houses are constructed on stilts so that their animals can live below. There is a bamboo ramp used to enter the houses. Women and men work in the fields to produce their own food and some income. They raise rice, vegetables and lots of chili and other spices. Hot spices are a necessary and favorite part of every meal. Few villages have electricity and many people have to use a nearby stream or river for bathing, washing clothes, and collecting drinking water. Daily life follows a seasonal pattern of planting and harvesting produce. Wood is collected for cooking, so we often saw women carrying axes and bundles of firewood. 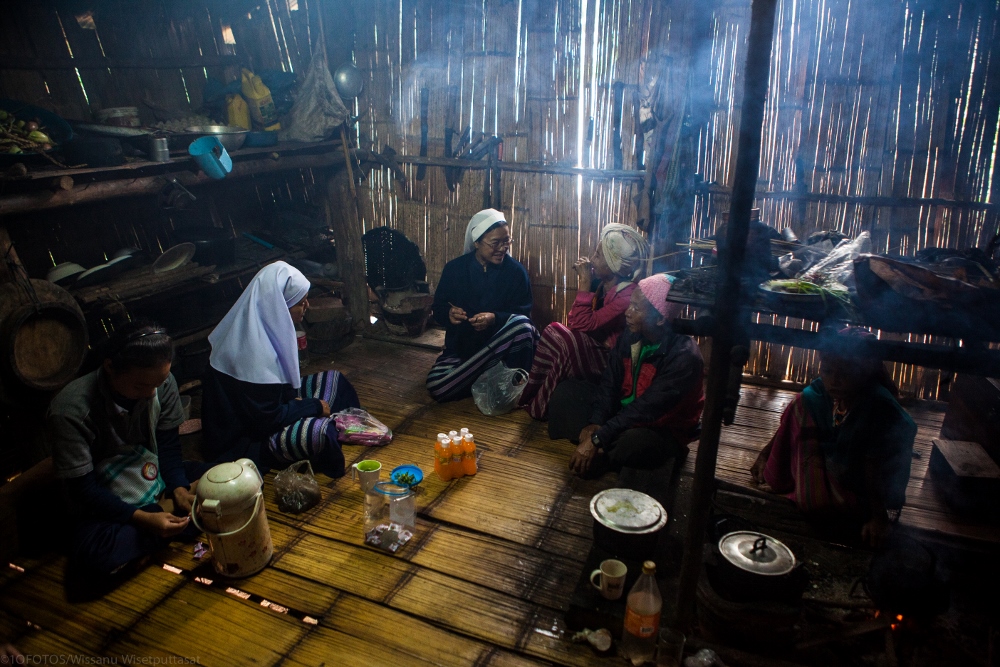 Sisters visiting a Karen family in their home. (Provided photo)

The Mae Pon Sisters were the first indigenous congregation in the northeastern area of Thailand to work with the Karen people of the area, and today 55 percent of the Chiang Mai diocese is Catholic. This region of Thailand borders Myanmar and so families lived in the mountains between the two countries. Currently, many Karen are fleeing night raids from Myanmar into Thailand. They end up in refugee camps, sometimes for years.

The sisters' congregation grew slowly because Catholicism only took root in the late 1950s. The priests who worked in the Chiang Mai area saw the need for sisters to help them in catechetical work with children at the parish center. They first recruited Salesian sisters from France who had been expelled from missions in China. However, the sisters found the language very difficult as they tried to care for and teach the children. So there was pressure to allow young women who wanted to become sisters to do so, even though they had not been Christian very long themselves. Although the animist or Buddhist culture is very religious, the practices were not always compatible with Christianity. It is also a matriarchal culture. In this tradition a woman is the head of the spirit clan, and a new husband joins his wife's family. Girls were married at young ages and expected to have large families. It was quite unthinkable not to marry at all.

Two young women, Cecilia and Clara, began the training for religious life in the late 1950s, even though the Sister Emmanuel could only communicate with them through sign language. She supplemented her instruction by writing out her intentions in French, and Fr. Bonat, the pastor, would translate them for the girls. He also taught them Scripture and catechism. Sister Emmanuel also taught them embroidery and how to perform domestic duties. By 1960 the two women were ready for postulancy, but Clara, only 18, became ill and died suddenly. After much reflection, Cecilia decided to go forward alone. Three years later, four women received the religious habit. Illness and other circumstances determined that the French sisters return home, leaving the four who had recently taken first vows to forge ahead with the new congregation.

The bishop wrote a simple way of life for the sisters to follow, and gradually other girls came to join them. The new congregation then took the name: Missionary Sisters of Mary Immaculate Conception. Besides working at the pastoral center the sisters began visiting villages in other areas and some took up residence there. They looked after boarders at the parish school, taught catechism and visited village elders. As in any new congregation, women entered, stayed a time and left. Now there are 55 members who work in 20 missions.

In 1997, Sister Cecilia, general superior at the time, received permission from the bishop to have a sister trained as a novice director so the sisters could have their own formation program, rather than depending on other congregations. And in 2004, during a 30-day Jesuit retreat she was inspired to request that sisters who were ready could make perpetual vows. Ten were professed and they began designing an official constitution. 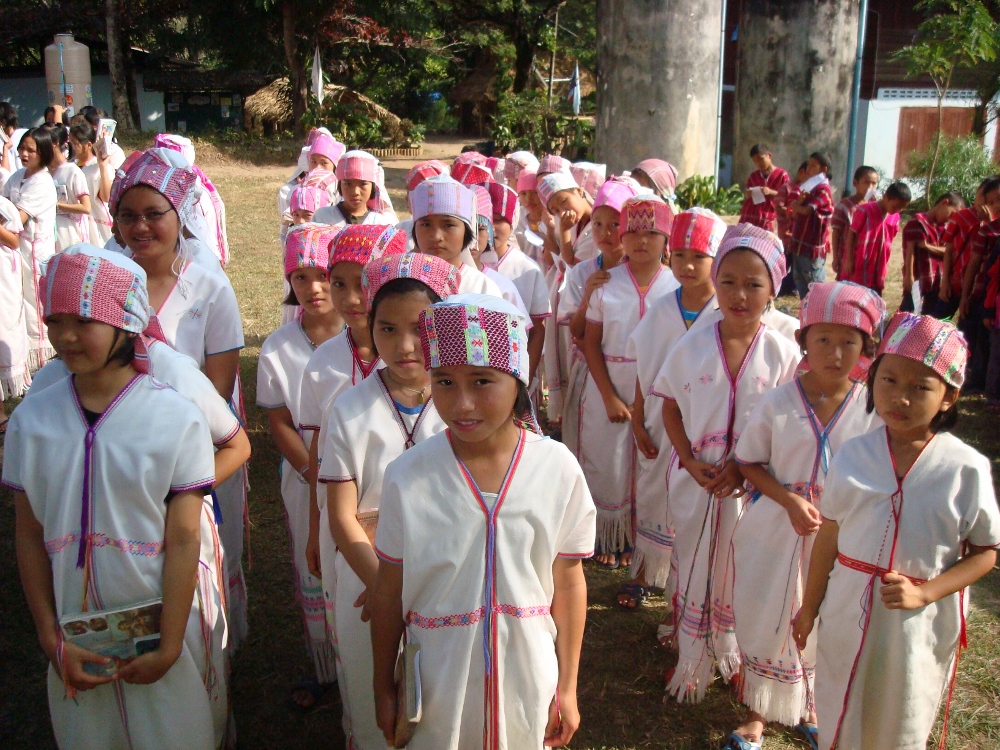 Being members of the local Karen tribes affords them special understanding of the tribal people and inspires their trust. Life in their convents is not unlike the lives of the people with whom they work. They till paddies and harvest rice and vegetables and cook for themselves. Working with the poor does not give the sisters much income so they have to earn their own way. Many of them are skilled weavers of cloth that is then sewn into skirts and bags for sale. Of course, in the midst of all these mission and livelihood activities they have to nurture their spiritual, religious and apostolic lives with formation programs, Scripture study and prayer. They also take courses in pastoral work and computer.

It was fun for me to visit their convent in the city of Chiang Mai and see the novices and postulants at their daily activities. I am always inspired by how God loves diversity. We see it over and over as the Spirit of God leads persons to set aside family and cultural expectations to live lives of prayer and service of others wherever the Gospel is planted.

My thanks to the Karen Mae Pon Sisters and Sr. Salome Joseph for the guidance in writing this blog.