Voices lifted in song as more than 135 sisters from 123 congregations across Africa carried lit candles from meeting rooms where Mass had been celebrated down the hotel's sweeping staircase and into the warm Nairobi night.

For days, they had shared stories of hope, of courage, of how the ministries they run and those they want to start can fit into larger goals to help change their communities, their countries, Africa and the world. Now, they and other attendees sang in Swahili and English: "Simama imara katika imani" — "Stand strong in faith."

There are many memories I will carry from this special convening of Catholic sisters, but this one will stay in my heart. As attendees representing Global Sisters Report, Sr. Joyce Meyer and I were honored to hold two of the initially lit candles that were used then to light others. It was a powerful symbolic ritual near the close of the October 16-19 event sponsored by the African Sisters Education Collaborative (ASEC) and the Conrad N. Hilton Foundation, which also funds GSR.

The convening brought together congregation leaders for an ambitious agenda: to take up the role spelled out in the conference's name, "Catholic Sisters: Champions of Sustainable Development in Africa."

Posters displayed at the conference showcased dozens of congregations' efforts and how they fit into the SDGs, such as a home and skills training center for young people in Cameroon, a project in Kenya that provides children with disabilities and their families with microfinance and income-generating opportunities, and a home in Zambia to help women who had been alcoholics, divorced or sex workers.

In a world of pain and poverty, conflict and division, it was soul-renewing to read of the projects, see photos of those helped, and talk with the sisters who dedicate their lives to the welfare of others and live out the Gospel message in such direct and meaningful ways.

Speakers and panelists at the convening repeatedly stressed the importance of gathering data and documentation and of forming collaborations and partnerships across congregations, sister associations and organizations.

"Globally, there is deeper awareness about the social concerns facing our world that cannot be handled without cooperation," Sr. Jane Wakahiu, ASEC executive director and a Little Sister of St. Francis, told the group at one of the opening sessions. "I see this convening as embodying the African concept: 'I am because you are.' We need each other to transform our world."

She cited ASEC as an example of transformation. From its beginning in 1999 as a collaboration among four Catholic universities and their sister congregations, ASEC has served more than 4,500 sisters from 10 African countries through its Sisters Leadership Development Initiative courses and its Higher Education for Sisters in Africa program. Wakahiu credited ASEC's partnership with the Hilton Foundation as fundamental to the program's growth.

Other interactive and discussion sessions focused on the need for a center to study religious life in Africa, to gather information and data on the programs that sisters run and the people they serve, to track progress, and to share lessons learned by congregations. Such an institute would help build bridges to foundations, nongovernmental organizations and universities, which in turn would help in achieving the U.N.'s development goals, she said.

There is potential for the approximately 75,000 sisters across Africa to be a force for transformative change, said Sr. Rosemarie Nassif, director of the Catholic Sisters Initiative for the Hilton Foundation and a School Sister of Notre Dame.

"Your congregation's connections, your sisters' connections across the globe have an exponential impact on the power and influence on all you are and do," she told the group. "You belong to a powerful network of collaboration, compassion and communion. The global sisterhood is a dynamic force like none other."

"God desires we achieve the SDGs even more than we do; we can trust that," she said. "We come together with hope and to give hope to each other, not just because of what we can do, but with all those who are connected with us can do."

Sisters must be both "the champions and the conscience" of the SDGs and not lose their prophetic voice, said Sr. Pat Murray, executive secretary of the International Union of Superiors General (UISG) in a panel discussion.

Pope Francis' encyclical Laudato Sí released in May 2015, critiques the economic system underlying the status quo, which the SDGs don't do, she said an interview. "The challenge for us is to marry" Laudato Sí and the SDGs and hold people and institutions to account, she said.

After the close of the convening, Wakahiu said in an interview that the event was successful in conveying to sisters that working together across congregations and communities will result in greater change and more effective programs.

"They felt more connected with what is happening at the global level, that what we are doing is not only serving the local people," Wakahiu said. "There's also a new level of awareness of the need to have a more systemic approach."

The need for a center to study religious life, for surveys to collect data and the benefit of such information was also clearer, she said. "There is a new awakening, a change of heart and way of looking at things."

Participants agreed. It was enriching to hear speakers, some of whom were not Catholic sisters, talk of the global sisterhood and where "we can be involved in transforming activities among our own people," Sr. Josepha Angeline Atswele Indoko, superior of the Sisters of Mary of Kakamega in Kenya, told me during one evening reception.

African sisters usually think of their own congregations or personal projects, but the convening encouraged a much broader view while maintaining a spiritual focus.

"We have to think of how we are witnessing. How faithful am in this ministry? What is success?" Indoko said. "Yes, I helped so many children go through the school system, so I gain the glory, but we always have to remember it is all done for the glory of God. That's what I've learned here."

I remembered our conversation and her words as the sisters held their candles and shifted their voices to another song, the anthem for the Association of Sisterhoods of Kenya, which seemed so appropriate for this gathering: "United we stand in Christ as a sign of God's presence." 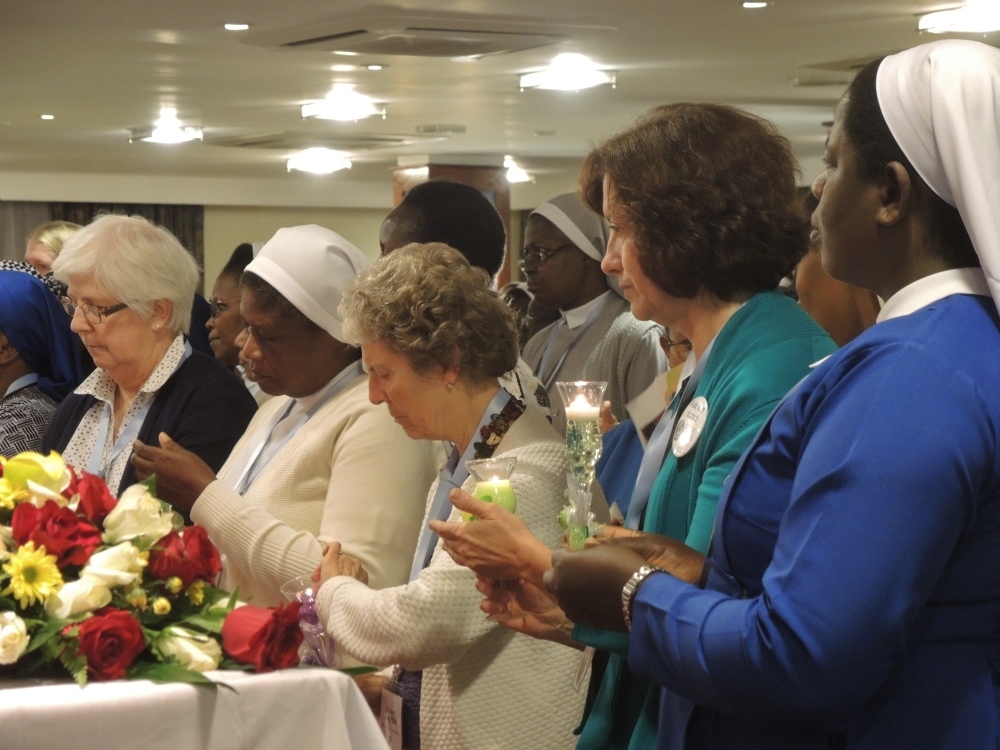 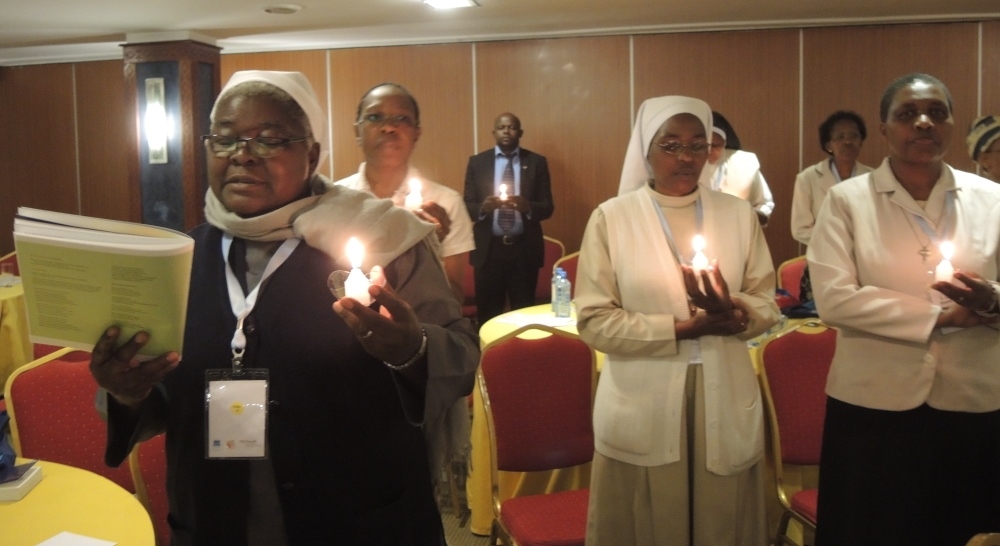