How are we called to lead? 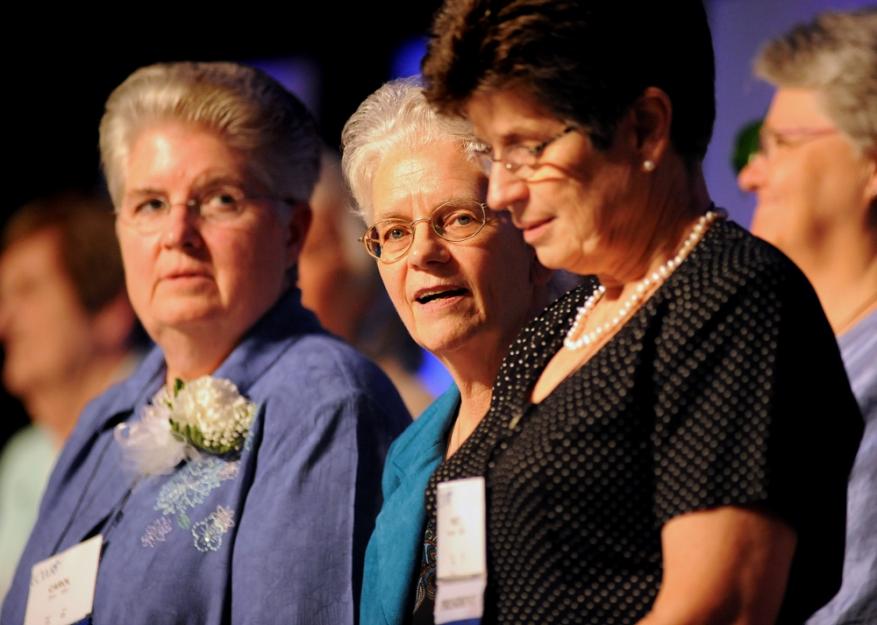 “Who are we?” “What are we to be about?” Fundamental questions in the search for meaning in our lives. Broader and deeper dimensions unfold as we mature. Times of transition and crises bring them to the forefront, sharpen them.

Recently I read Spiritual Leadership for Challenging Times, a collection of 10 addresses, spanning the years between 1977 and 2012, given by the presidents of the Leadership Conference of Women Religious (LCWR) at its annual assemblies. The collection allows a glimpse into how the leaders of LCWR have grappled with these fundamental questions of identity and purpose of religious life since Vatican II. LCWR’s membership is comprised of the elected leaders of congregations, representing over 80 percent of all women religious in the U.S., so another fundamental question, “How are we called to lead?” echoed throughout.

It seems that the doctrinal assessment by the Congregation for the Doctrine of the Faith (CDF) led, in part, to the publication of this book, according to Sr. Annmarie Sanders, LCWR director of communications, in its preface. LCWR captured the public’s attention in April 2012, following CDF’s release of its findings. A flurry of media reports swirled around CDF’s criticism of LCWR for focusing too much on social justice issues and not enough on abortion and the church’s teaching regarding human sexuality and for a “prevalence of certain radical feminist themes” in its publications and programs. Interest in the LCWR and its style of leadership has continued. These addresses help meet that. The choice of which addresses to include in the book was based on its theme of spiritual leadership. Some of the presidents may be more familiar, like Srs. Theresa Kane and Joan Chittister; others, perhaps less so, like Srs. Nadine Foley and Margaret Cafferty. Each brings her own valuable insights and leadership skills.

In a sense, the addresses are snapshots taken along the way as LCWR and religious life itself has moved through major transitions set in motion by the Second Vatican Council’s call to engage the world in light of the Gospel and adapt to the times.

What do these snapshots reveal?

A Maturing. This is evident in the increasing richness of the reflections, employing the use of images, stories, art and dreams. There is a greater depth and an expanding awareness over time. An ability to grow in embracing both gifts and limitations and in recognizing complexity is manifested. Keenness in reading the signs of the times seems to ripen. LCWR’s intentional focus on contemplation bears fruit.

A sense of finding one’s voice. Questions about what it means to be ecclesial women arise in every address. The reader gets a sense that women religious are finding their voice and laying claim to their identity as women in the church. The desire and struggle to be treated as mature adults with mutuality and equality in the church is clearly expressed. Love of the church is intertwined with the pain of exclusion. Ways to bridge the gaps between women religious and the hierarchy are explored. Dialogue sought.

A feeling of movement, of being on a journey. From the first address by Sr. Joan Chittister in 1977 through the last one by Sr. Pat Farrell in 2012, readers enter into the journey of women religious as they move into the future. The way is not determined, set or clearly laid out. As Chittister says, “We have an obligation to go . . . where there is no trail and leave a path.” Images and scripture passages of exile, wandering in the desert or wild spaces and being midwives of the future are employed to give meaning to steps along the way. The presidents acknowledge that decisions and actions taken in the present shape what is to come – and accept responsibility. Farrell’s “God is calling us from the future” establishes the framework and grounding for discernment.

I was in religious life throughout the 35 year time period of the book and in leadership from 2004 to 2012. Pausing to look through this family photo album, I realize the wisdom gained and am grateful for those who have gone before us; I recognize the core of our identity remained, even as we aged, and rejoice in the relatives we’ve added along the way. The family is now global and encompasses creation itself!

There is much to ponder and learn from reading this collection. It offers many insights beneficial to our own personal and communal life journeys. Through the strong witness of spiritual leadership by these women religious, leaders of all types of church groups and organizations will find inspiration for their own ministries in these challenging times. Readers may also gain new perspectives and understandings that bring light to the current situation arising out of the Congregation for the Doctrine of the Faith’s doctrinal assessment of LCWR.

The final address in the book was given by Pat Farrell in 2012 at the height of the crisis of the doctrinal assessment. Farrell did not anticipate what her leadership role would demand. She stepped into it, drew upon the past and exemplified what spiritual leadership is all about.

In the introduction, Park articulates the significance of Farrell’s presentation:

“In many ways, the presidential address of Pat Farrell represents for the LCWR both a culmination of what has gone before and a transition toward what is yet to come. It is an articulation of leadership at a time when the currents of the past seem to swell into a mighty, perhaps seismic, wave of change – a fundamental shift in sensibility and consciousness for women religious.”

It’s hard to articulate the feelings and atmosphere in the room when Pat finished her presentation. We drew strength from her courage. We bonded in solidarity. We were challenged to be our best. We were deeply grateful for her leadership. I know I exclaimed, “This was the greatest example of leadership I have ever seen!” It still is.

Editor's note: The Catholic University of America's Institute for Policy Research & Catholic Studies hosted a day-long study event June 7, co-sponsored by Solidarity with Sisters called "Spiritual Leadership for Challenging Times: Leading from the Emerging Future." GSR's Dawn Araujo has this report. Watch videos of highlights from the conference, published by Solidarity with Sisters.

Religious Life | How are we called to lead?

The global sisterhood: nowhere and everywhere