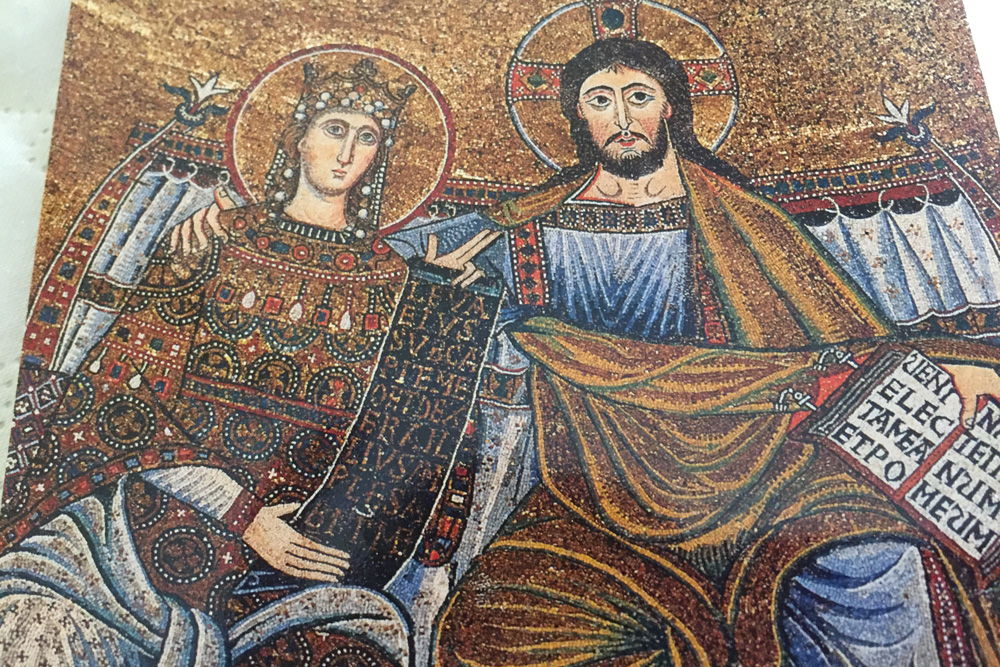 It has been several weeks now since I attended the International Union of Superiors General (UISG) assembly in Rome, but images of the theme, Sowers of Prophetic Hope, have remained strongly with me.

We are called to be sowers of seeds and to perceive and remember the power of small, sown seeds. We contemplated together the Gospel image of the mustard seed: its unimaginable power inherent even in its smallness. We contemplated images of small seeds pushing their way through seemingly impossible odds of extremely hard surfaces. These and other images reminded us to be attentive to small actions that begin to change landscapes of unthinkably impossible situations.

The contemplative consciousness of the days made me more attentive and open to being surprised during and outside of meetings. An amazing surprise one evening was the discovery of an ancient mosaic above the altar in the 12th-century Basilica of Santa Maria in Trastevere: Mary and Jesus, both with crowns, seated on thrones side by side in an intimacy that is captivating. Jesus has his arm tenderly circling Mary's shoulders, and she, with hands in her lap, is pointing to Jesus.

This mosaic awakened in me how small actions can change the way we see. Jesus' action is a small one of intimacy. He and Mary sitting side by side is a revelation of mutuality, of the equality of friendship. Mary was no longer only mother to him, but companion and friend. "Who is my mother, brother or sister? The one who does the will of my father." "You are no longer servants, but I call you friends if you do the will of my father."

Friendship is a mutual relationship, not hierarchical, not one of power over the other. Isn't this our call as a church, to be a community of friends?

The image of Jesus and Mary came to mind again a few days later at the audience the UISG body had with Pope Francis. When I entered the audience room, I expected to see the pope's chair up on the stage, where I had seen it at other times, a place from which popes offer messages to audiences.

I searched and eventually found it in a very different place — another surprise of the week. It was sitting floor-level, facing the chairs where sisters were being seated.

Pope Francis came into the audience chamber from the back after blessing the beautiful anti-trafficking exhibit in the hallway outside and proceeded to his chair, with sisters enthusiastically welcoming him. Once seated, Sr. Carmen Sammut, now-former president of UISG, rose and moved forward to greet him. To my surprise, as she did so, he stood, greeted her and called for another chair to be brought for her. He invited her to sit beside him at his table.

Having her sit side by side with him was already an unheralded change of protocol that did not end there. An attendant handed Pope Francis his speech, which, instead of reading, he handed to Sister Carmen, saying, "You can read this later. Now, I want to have conversation with the sisters."

It was stunning. Another break with protocol.

There were no questions written and vetted before the pope would answer them. The conversation was to be totally open, without fear of what might be said. I was amazed at the vulnerability in this action.

Pope Francis then invited any sister who desired to ask whatever she wished. A number of sisters asked questions, but one touched me deeply, primarily for the courage it took for the sister to ask.

A Sister of the Sacred Heart of Jesus from South Sudan asked him directly: "Holy Father, why are there still five vacancies for bishops in South Sudan? We are a country without shepherds. We need bishops. When will you do something to change this?"

Pope Francis was quiet for a moment before agreeing that it is not good to be without church leadership in that war-torn country. Then he explained that he has not yet identified anyone he thought could be appointed bishop or found those willing to accept the posts. He also mentioned his desire to visit there and his regret that last year's planned visit was postponed because of security reasons.

All of these changes may seem insignificant, but they ignited new hope in me. They are small seeds sown that may be part of the breaking through seemingly unchangeable rigidity of a hierarchy that clings to power.

Woman appointed as rector of Pontifical university in Rome