Based on that data and with the support of the Conrad N. Hilton Foundation, CVN has launched a three-year initiative called From Service to Sisterhood, "to strengthen the vitality of women's religious congregations." The initiative launched with a symposium July 17-18 in Chicago, attended by volunteer program directors, sisters and women in initial formation who were alumni of volunteer programs, young adult ministers from the Archdiocese of Chicago and representatives of the Leadership Conference of Women Religious (LCWR) and United States Conference of Catholic Bishops (USCCB).

Daughter of Charity Sr. Meg Kymes began her year of service with the Vincentian Service Corps in St. Louis already thinking about a religious vocation.

"Being a part of VSC introduced me to sisters in a more personal way. The program gave me a network of people my age who supported my discernment and encouraged me. The year of service can open you up, gently, to God's will in your life, no matter what form that takes."

Gerwitz felt a question arising about five months into her year with the Colorado Vincentian Volunteers: "Can I live this way of solidarity, intentionality and companioning my whole life?" She felt the desire to be a part of "something bigger than myself" and was drawn by community life and the concern for social justice issues that was evident in the sisters she met during the year of service.

Klapheke 's experience with the Jesuit Volunteers-Northwest in Anchorage, Ala., working at a soup kitchen with the homeless, led her back to Ohio to pursue a master’s degree in nutrition and dietetics. But she realized she was missing the intentional community life and the spiritual dimension and sense of purpose she had before.

A question from her University of Dayton classmate and former Rostro de Cristo volunteer, (now sister) Tracy Kemme, "hit me like a ton of bricks!" Her friend asked, "Have you ever considered religious life? I think it would bring you great joy!" Even though she had had 16 years of Catholic education, Klapheke said the possibility of a religious vocation never had occurred to her. Within hours she was on the Internet exploring the Sisters of Charity site to make contact with the congregational vocation director.

One of the learnings of the symposium was that asking the question of those in whom we recognize qualities that would make a good religious is something that has been lacking. Integrating the volunteer experience and beginning a process of discernment can take months or even years, so offering support to former volunteers through things such as reunions, contacts for spiritual direction and retreats or programs for transition after the year of service should be helpful. Each of the former volunteers in attendance affirmed that the "pillars of service" for the volunteer programs – Community Life, Social Justice, Spirituality and Simple Living – opened them to the possibility of a religious vocation and prepared them for the experience of initial formation.

Fr. Tom Gaunt, SJ, Executive Director of CARA and Sr. Mary Johnson, SNDdeN, sociologist and researcher, presented data on emerging generations of Catholics that indicates significant demographic changes in the U.S. church. Populations have shifted so that now there are roughly equal proportions of the faithful in the Northeast, Midwest, South and West, rather than the previous high concentrations in the Northeast and Midwest. Post-Vatican II and Millennial Catholics, more diverse in culture and ethnicity, now comprise the majority of U.S. Catholics.

There is even more good news in the data presented by Johnson. A 2012 CARA study found that 8 percent of Catholic women in the Millennial generation (people born after 1981) had considered a religious vocation "at least a little seriously," and as many as 250,000 never-married Catholic women had very seriously considered a religious vocation. In the U.S. 1,200 women are currently in formation for religious life. These are almost equally divided between the two major conferences of religious women, LCWR and Council of Major Superiors of Religious Life (CMSWR) – and the retention rates for both groups are the same. The cultural and ethnic diversity of the youngest generations of Catholics is represented in the newest members of religious congregations. This presents opportunities and challenges for religious congregations that are more homogenous and older.

The import of this sociological data was not lost on the youngest symposium participants. Sr. Helen Thurlow, a second-year novice with the Benedictine Sisters of Queen of Angels Monastery in Mount Angel, Ore., was a volunteer with the Holy Cross Associates. After hearing Johnson's presentation on New Generations of Catholic Sisters: The Challenge of Diversity (Oxford University Press, 2014) and her challenge to correct the misperception that religious life is dying, Thurlow exclaimed, "I've got this awesome energy! We do need to change! We need to wake up!"

Put the invitation out there! Catholic women who have already demonstrated such great generosity of spirit through volunteer service deserve the support and encouragement of all of us to consider discernment of religious vocation. 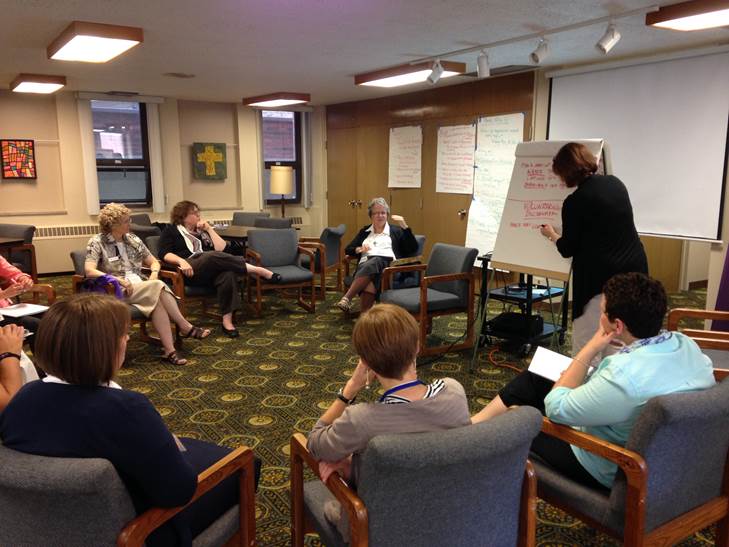