How do you put a value on connection?

That thought kept coming to me during the recent delegates' meeting of the International Union of Superiors General in Manila. As compelling as the sessions were, particularly those on multiculturality and the central theme of "building community in an intercultural world," the real spirit of UISG was evident in the connections forged among the sisters throughout the week.

The leaders of the congregations — some growing and vibrant, others aging and diminishing; some limited to a few dioceses, others spanning the globe — nonetheless found similarities and mutual support. Some knew each other from the 36 regional UISG bodies, known as constellations, or from area religious conferences, but for many, this was a new encounter with the worldwide scope of sisterhood.

It was for me. While Global Sisters Report focuses on Catholic women religious and their ministries around the world, and I have interviewed sisters in Japan, the Philippines, Kenya, Thailand, Myanmar, Hong Kong and Canada as well as many U.S. cities, I never before witnessed a gathering of women religious leaders from so many different nations united to live out the Gospel message " 'to welcome the stranger, to feed the hungry, to liberate the captive,' as Jesus has told us," as UISG president Sr. Carmen Sammut said in her opening remarks.

Congregations, charisms and ministries differ, of course. But though I have had a long career in business and economic journalism in which I interviewed many successful female business leaders and participated in several forums on women in leadership, what was remarkable to me about the UISG gathering was the true sense of shared purpose.

The sisters had traveled to Manila from all corners of the world — some on 20-plus-hour flights, with at least one sister waiting two days to get out of her country when the first plane broke down — to connect not for individual gain or even the advancement of an organization or corporation, but for the common good.

The emerging global sisterhood is evident in shared projects like Talitha Kum, the anti-human-trafficking "network of networks" that operates in 70 countries. But I saw it in action in many other ways at the UISG meeting in the Philippines.

In daily prayer reflections and discussion groups, the leaders of the congregations shared experiences, joys and challenges facing their congregation in conversations held in English, Spanish, French, Italian, Tagalog and local languages of African and Asian nations.

The peaceful, tropical garden setting of the Villa Consuelo Retreat House in greater Manila was a welcome respite from the pressures of leadership. Yet it wasn't entirely a break: The sisters gathered in the lobby early in the morning and late in the evening to get internet access for news from their communities and to take care of needed business.

They also used this time to deepen conversations begun more casually during breaks and meals. For example, a sister from France assisted a sister from the Democratic Republic of Congo in sending photos of mass graves, children killed, and those left orphaned by skirmishes engulfing that war-torn African nation to contacts outside the country, pictures she feared could be blocked by the government at home. Another sister from French-speaking Canada translated her story to English-speakers.

Participating in UISG provides opportunities to share and learn, said Sr. Faustina Hasford, superior general of the Society of the Infant Jesus in Ghana, which has 66 sisters in four dioceses working in schools, parishes and health clinics.

Certain sessions and messages particularly resonated with some sisters. After a session on multiculturality focusing on ways we exclude those who are different, one sister in a group discussion recalled with shame how years ago she and others in her community teased a sister from another ethnic group within her country, one deemed lower and less educated, until that sister became reserved, almost silent in their presence. Another sister in a small and aging congregation recognized bias as also intergenerational, wondering aloud if younger sisters had been inadvertently driven away by expectations that they be like the older sisters in the community.

"The whole concept of interculturality is an interesting one, and I can see how it can apply even when there aren't huge cultural issues," said Sr. Monica Cavanagh, congregational leader of the Sisters of St. Joseph of the Sacred Heart, which has about 800 sisters ministering throughout Australia, New Zealand, Ireland, Peru, East Timor, Scotland and Brazil.

While most of the sisters in Australia are of Australian and Irish background, there are some Asian sisters, Cavanagh said. The current congregation is a result of five congregations that have merged since 2012, so some of the points about interculturality apply to these circumstances as well, she added.

International Union of Superiors General helps "connect you to the global picture," she said. "Religious in Australia generally can be very insular." Cavanagh said she took away "a great sense of solidarity" from the meeting.

That solidarity is strengthening as some UISG constellations take connection to the next level. At the May 2016 UISG plenary in Rome, the regional group, or constellation, of Zambia, Malawi and Zimbabwe was invited to partner with the U.S. constellation.

The relationship is still evolving, said Sr. Illumina Virginia Jenny Katsukunya, superior general of the Little Children of our Blessed Lady, in an interview at the delegates' meeting in Manila. She and a sister leader delegate from Zambia attended the Leadership Conference of Women Religious assembly in August in Orlando and the U.S. constellation meeting that occurred right afterward.

"It's just like a friendship — a give and take," she said. They communicated the challenges in their countries, congregations and constellation to the U.S. delegates, she said. "They know what is happening with us. That is how friendship goes."

The value of UISG is that "it is opening up new horizons and responding to help us tackle issues at home, especially in formation," she said. "Our novices and young sisters need exposure. We are isolated by ourselves. We need to interact with others, to be part of a big family rather than on our own."

Two examples of connection through dance stay with me. During a visit to the residential program run by the Good Shepherd Sisters in Manila to rescue young girls from trafficking and abuse, Sr. Letta Mosue, superior general of the Sisters of St. Brigid of South Africa, and Sr. Josephine Mpatane, superior general of the Sisters of Calvary of Botswana, spontaneously joined in a dance performance created by the girls. It was powerful to see the sisters raise their arms in solidarity with the young girls to the song "One Billion Rising," the Philippines version of the women's empowerment song.

And later that evening, after cultural performances by young Filipinos, a few sisters joined them on the dance floor, then others, until more than 40 sisters were part of an exuberant, joyous — and just plain fun — dance.

The closing session of shared prayers was powerful and enriching. I was sorry to see the meeting end, conscious that I had been privileged to participate in a gathering of very special women who have answered the call to live their lives and lead other sisters in living theirs in special ways.

The closing prayer of Sr. Sally Hodgdon, UISG vice president and superior general of the Sisters of St. Joseph of Chambery, still echoes: "Compassionate God, in gratitude for the grace of being called to be co-creators of communities which reflect the fullness of hope and the fullness of life in our intercultural world, we commit ourselves to live the blessings of our days together here in Manila." 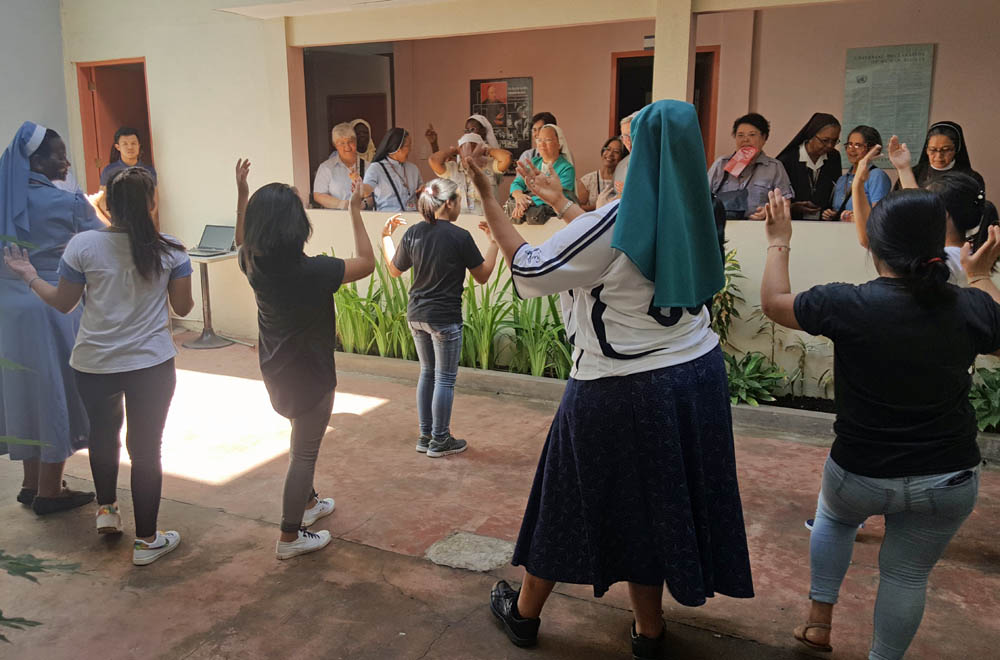 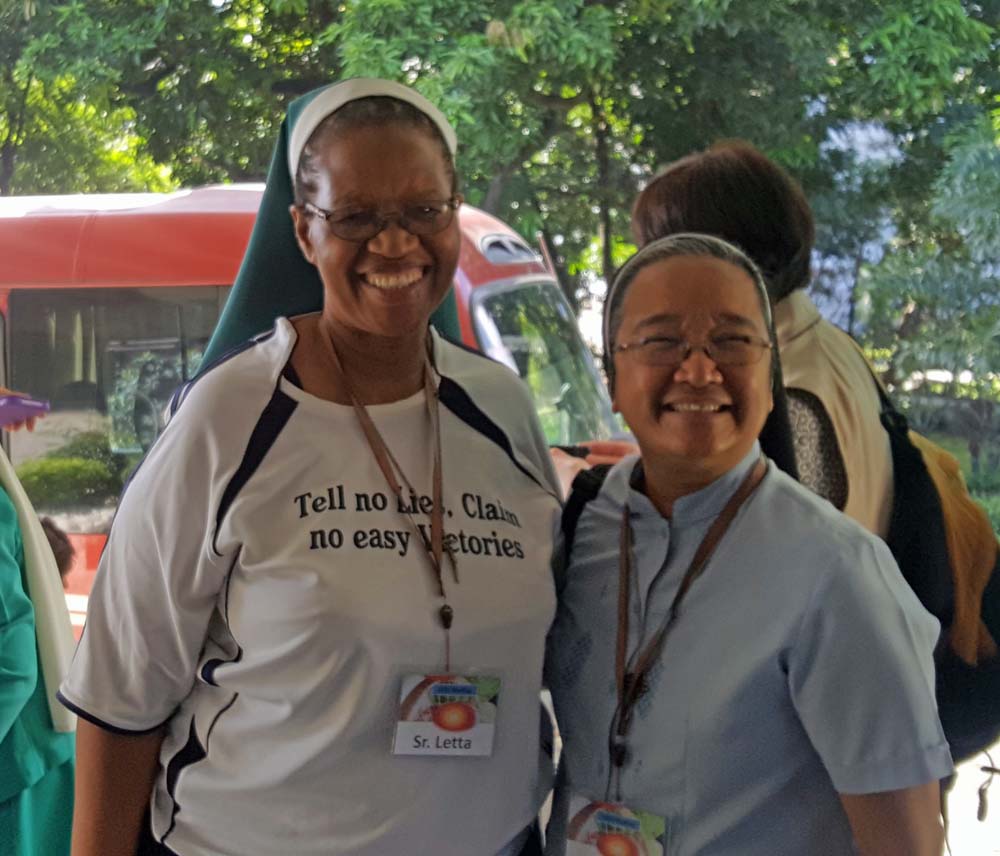 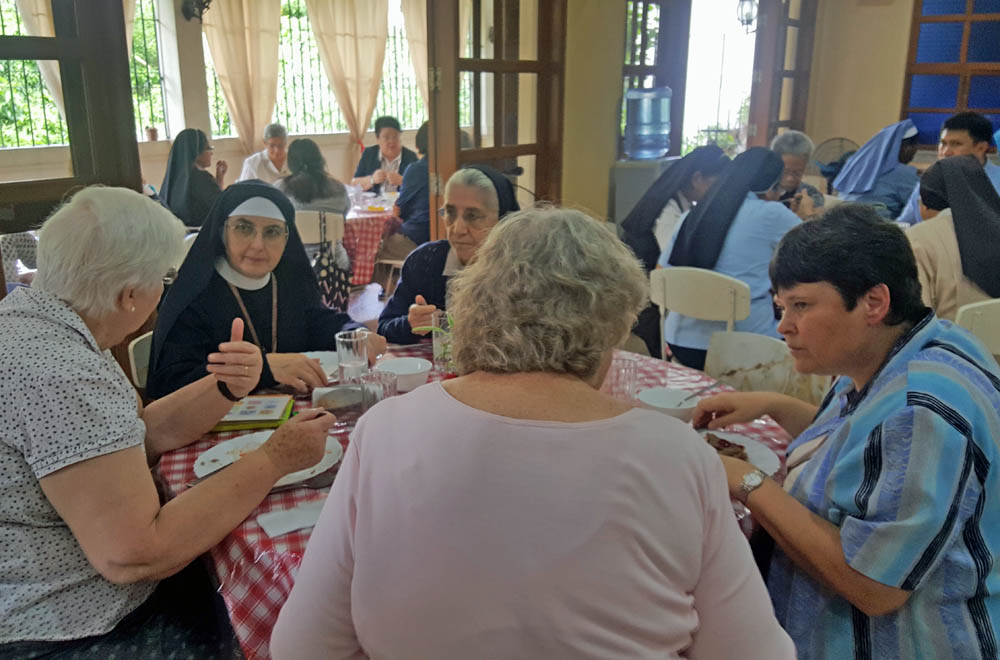 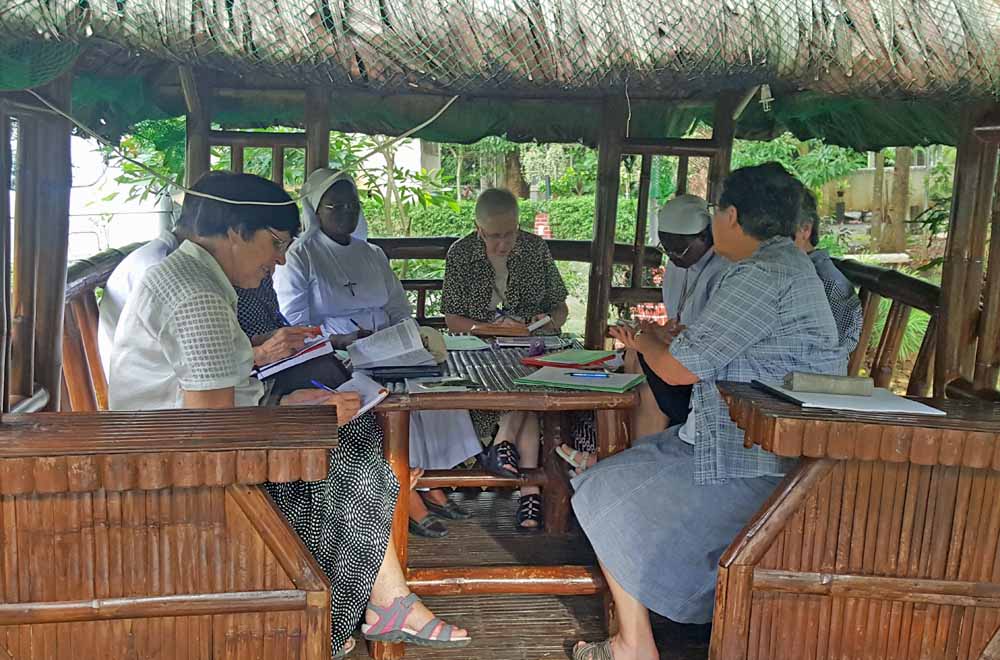