by Bridgid O'Brien
This article appears in the Notes from the Field and HIV/AIDS Ministry feature series. 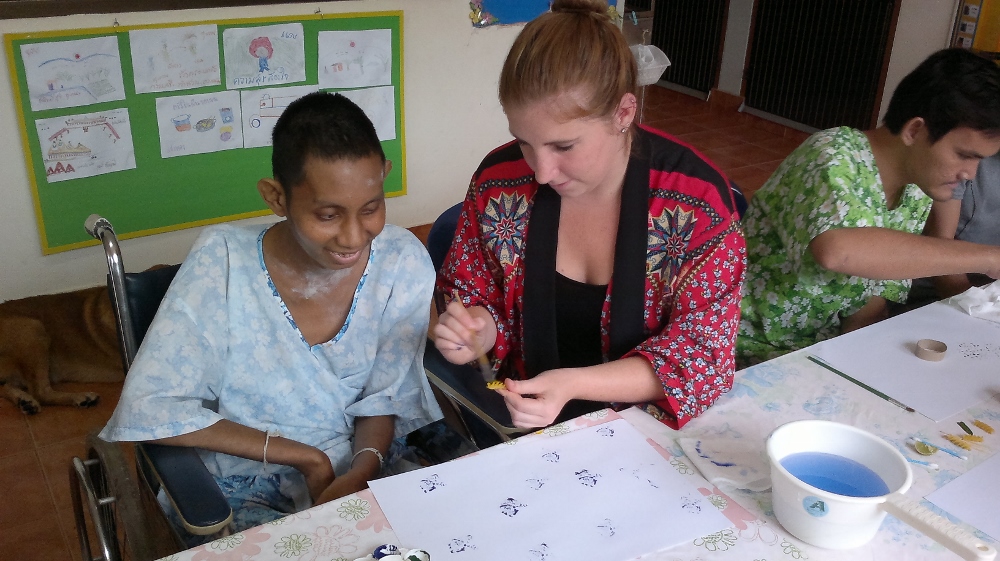 I did art therapy with King on a regular basis. (Provided photo)

The heart has a mysterious way of sending the most intimate of messages that the tongue cannot. Due to my status as a non-native, non-fluent Thai speaker, in the 10-and-a-half months I have lived in Thailand, in many situations I have needed to rely on entering into everyday conversations with my heart rather than with my words. Philosopher and theologian Jean Vanier says,

To love someone is to show them their beauty, their worth, their importance; it is to understand them, understand their cries and their body language; it is to rejoice in their presence, spend time in their company and communicate with them. To love is to live a heart-to-heart relationship with another, giving to and receiving from each other.

To learn how to feel so deeply, to learn how to love through action and presence is both a wonderful blessing and an immense curse.

I wish I could say that I first read this quote under much more ideal situations, and not on the back of a memorial card. In early October, the care center where I volunteer my time lost a very special person in the community. King was a 23-year-old patient who faced every new day and situation with wonder and awe. King was born with HIV and was raised by his aunt after the death of his mother when he was two. Four years ago, King suffered a brain infection that left him with limited lower body mobility and impaired use of his left arm. The brain infection also caused him to lose almost all of his speech capacity, except for the ability to count just past 10 and to make surprised “ooh” and “oww” sounds.

Following our tour of the care center on our first day, I told my community member Tamarah that I already knew that King and I would have a special connection. There was something about his spirit that immediately captured my heart, something about the smile always placed upon his face that instantly was replicated on my own. On that day, it was impossible for me to realize the extent to which our connection would grow or that it would be cut incredibly short. 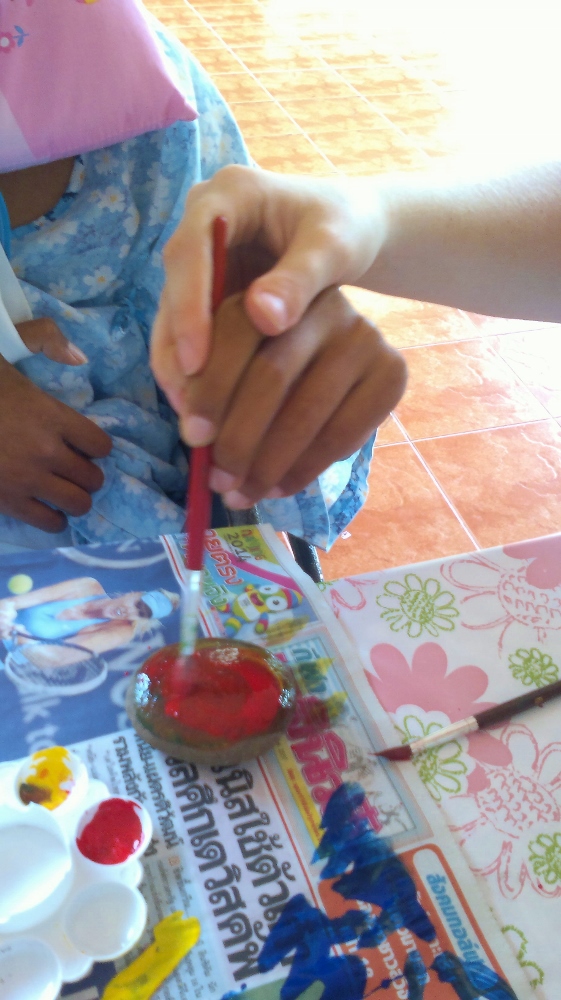 Four years ago, King suffered a brain infection that left him with limited lower body mobility and impaired use of his left arm. Painting was a way to do some therapy. (Provided photo)

I started every single morning greeting King and ended every single workday saying goodbye to him. On his bed next to his head sat a pink bear with “Have A Great Day” written on the stomach in English. Each morning as I got to work, I would enter King’s room, pick up and shake the bear so that the bells around the collar would chime and tell him good morning. His smile never failed to reach from ear to ear. Leaving work, I would do the same, always adding that I would see him bright and early the next morning. At his funeral, I was composed throughout the entire series of rituals that encompass a Buddhist ceremony, even when pouring water over his body in the casket. He did not look like himself. Perhaps he resembled a botched wax replica of himself — he was not the always-smiling, always-laughing King I’d loved for the past two months, and it was therefore easy to forget the reality of the identity lying in the starched, white casket. I was collected for almost the whole ceremony, but when they pulled that bear out of the casket in order to burn it with the rest of his belongings, I could not stop the tears for pouring down my face. It was suddenly and abruptly made all so real.

King had been my fountain of light in Nong Khai. Every week he was my partner for art therapy sessions, and every day I helped to bathe him and assisted him with physical therapy. While it was my job to help him, I think that King helped me more than he could ever know. He helped to show me my own vulnerabilities but also the forces and capacity for love in my heart. With King, his lack of speech capabilities created no immediate expectation of trying to engage him with my limited knowledge of the Thai language. However, when hearts are connected and there is no need for words, a passing smile or a whispered laugh are just as concrete a conversation.

On the Monday before King passed, his eyes radiated a deep sadness that I had not seen from him before. He had stopped eating and he would not take his medicine. His body began to grow weaker. Passing his bedroom after bathing another patient, I could not help but notice the pain and solitude in his eyes. It was a pain that locked my own eyes and drew me in. I pulled up a chair next to his bed and in silence, held his hand for 40 minutes. While our mouths were silent, there was a conversation going on. I’m not exactly sure what our hearts were saying to each other, but I hope mine was telling him how special he was to me, how much I enjoyed his presence, how happy seeing him made me feel every day. After leaving, I stood outside his open window and peered into his bedroom. The sadness had not left his eyes, and I could tell he was in a lot of pain. “I just want to be able to help you,” I said to him in Thai. He smiled and began to laugh, the only sign of joy I had seen from him all day.

An hour later, King was put on a feeding tube. His eyes had lost any semblance of the carefree boy I’d known. Again, I could not help but be drawn into his room. I stood above his bed and rubbed the back of my hand along his cheek while humming “Hush Little Baby,” the only song that came to mind at the time. His face began to relax, and he started to fall asleep. I did not know that this would be my last fully conscious interaction with King, but I am glad that it was. 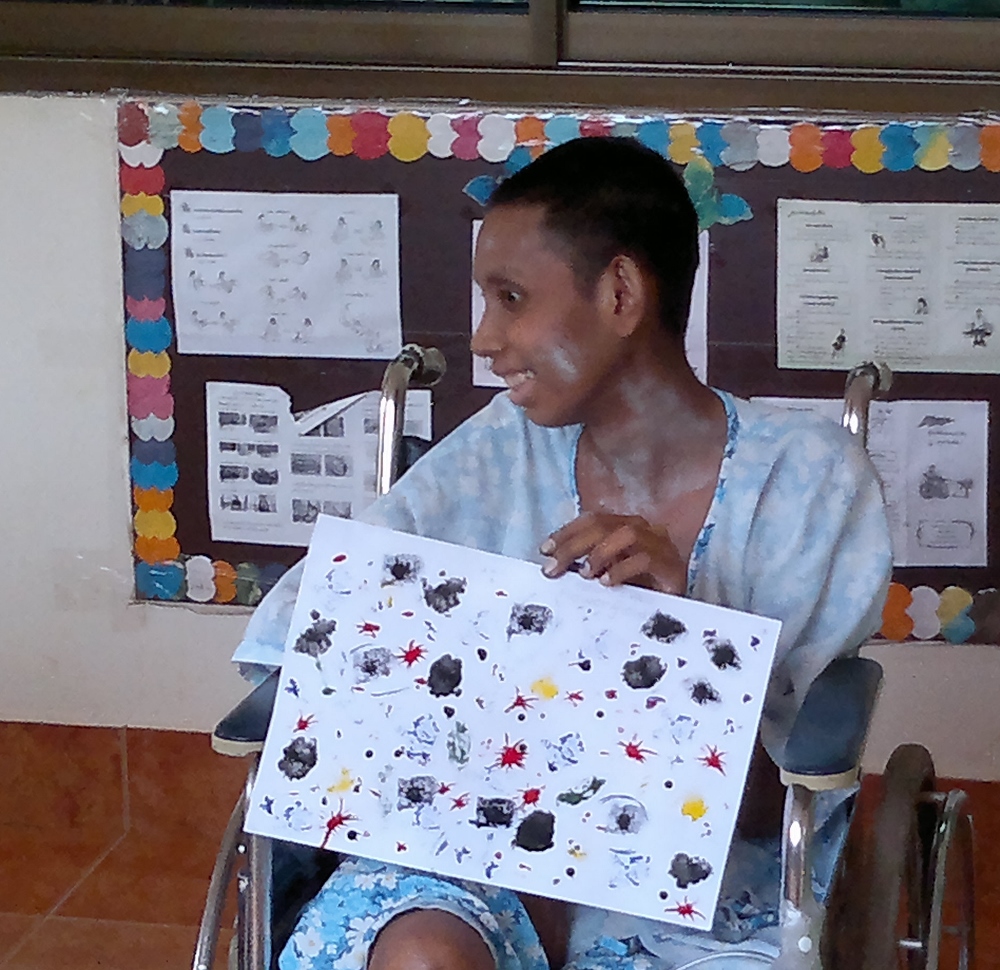 King displays our final art project to the rest of the patient community. (Bridgid O’Brien)

King was brought to the hospital the next morning for a scheduled checkup. His body was visibly deteriorating and his weakness could not be ignored, but the routine nature of the hospital visit convinced me that everything would be okay. Sadly, he would pass away just five hours later. On the afternoon that King passed away, all of the staff members from the care center were present. While it was really hard to watch him take his last breaths, I am so thankful that I got to be there to comfort him and hold his hand one more time. We didn’t find out until the day of his funeral, but it had been his 23rd birthday.

I don’t think I will ever forget about King. He will be a part of me forever. His smile will forever be ingrained in my memory. In reflecting on his death 10-and-a-half months later, I hope that his short life continues to be a model of curiosity, of joy and excitement for my own life. I want to remember the power of presence, the strength in love through action. I’m not sure why King had to be taken so quickly, but I am glad that our hearts were able to have so many meaningful conversations. I hope my heart was whispering to him how beautiful and worthy and important he was, because his heart was helping me to learn that in myself.

[Bridgid O’Brien is an international Good Shepherd Volunteer in Nong Khai, Thailand, working with an organization that provides care, resources and income-generating opportunities for individuals affected and infected with HIV/AIDS.]