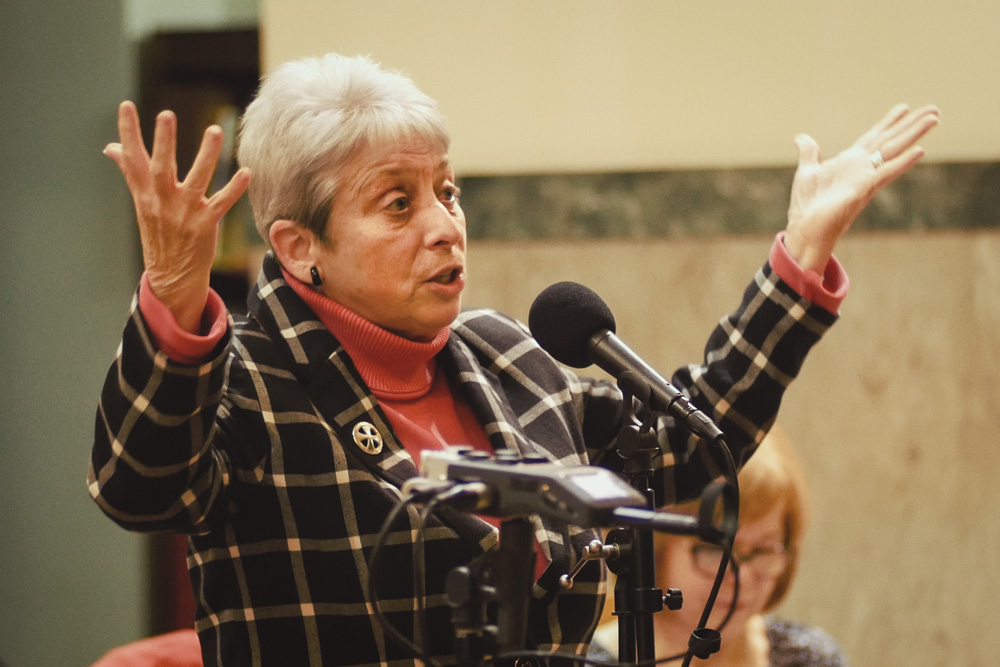 Sister of Charity of Seton Hill Barbara Einloth talks about her understanding of God's response when we struggle over the world's sorrows. (Ryan Haggerty)

Pittsburgh, Pennsylvania — It was a miracle on the level of the Red Sea parting. More than 100 kids in first to seventh grades were completely silent. For an hour. In church. I'd taught catechism to some of these kids, and I'd never seen them so rapt.

The focus of their attention? Catholic sisters simply telling their life stories to an audience of children and adults in March at St. Sylvester Parish in Pittsburgh.

Sr. Rosemary Donley of the Sisters of Charity of Seton Hill told them about her youthful dreams of teaching Shakespeare; she had imagined she'd become an English teacher. And then she told them how her congregation decided instead that she would be a nurse — an outcome that was a perfect fit.

"All the things I wanted to read about I was suddenly part of: life and death, great joy and suffering," she said.

Donley's story and the stories of three other Sisters of Charity of Seton Hill marked the kickoff of Standup Sisters, an event and podcast series I created this year to connect Catholics and non-Catholics with sisters. I borrowed the format of the event from the popular public radio program The Moth, which features live events in which people tell true personal stories on stage without notes.

The Standup Sisters project started about a year after I'd left my public radio job of 13 years reporting on environmental issues and started a media storytelling business called Unabridged Press. Society's lack of progress in making sustainable environmental choices frustrated me. What could change people's hearts if science isn't changing our minds?

I thought about the kinds of things that made me grow and learn about the environment and poverty and hunger. The communion of saints, as well as my family and friends in my Catholic upbringing and life, inspired me through their stories and examples.

Catholic sisters have always been on the vanguard of social progress. I wanted to create a public space where sisters' stories of their lives and work are heard.

This was all on my mind late last year, when I was at the neighborhood library and saw a Sister of Charity of Seton Hill I knew. She'd spent the day at a conference about human trafficking. We got pizza, and she told me about what she'd learned that day. I told her my idea for Standup Sisters. She quickly connected me with key employees in her congregation.

Then, when a friend told me that the National Catholic Sisters Week organization was offering mini-grants to hold events letting people know about sisters, I jumped in. The leader of the Sisters of Charity of Seton Hill signed on with me as a partner to produce Standup Sisters.

I got to work pestering individual sisters to get up on stage — which, for our event, was the church sanctuary. I learned that Sr. Mary Clark had written and performed a play about St. Elizabeth Seton, so I figured she'd be game. Indeed, she was the first to agree. 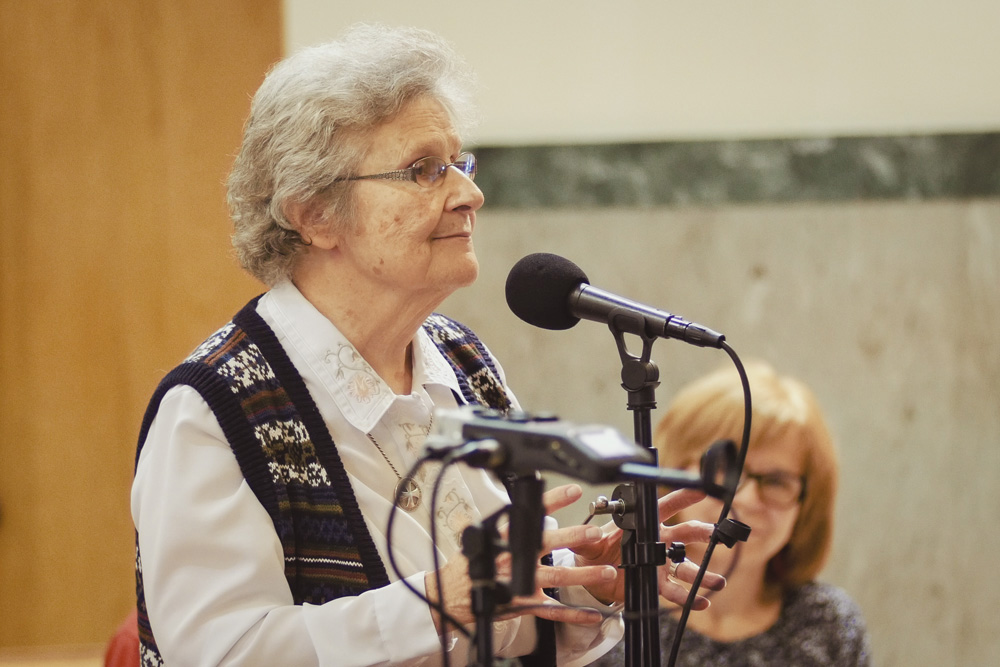 Sr. Mary Clark speaks of a moment when she doubted she chose the right path as a Sister of Charity of Seton Hill during the Standup Sisters event in March. (Ryan Haggerty)

In her story, Clark confided to the children and adults in the audience about a moment when she doubted her vocation. It was when a biological sister who was very close to her age gave birth to twins.

"I thought, 'My sister's going to have two little babies today ... the best way to make an impact on the world is to have children.' And that wasn't going to happen for me," Clark said.

With sweet intimacy, Clark spoke of how another Sister of Charity consoled her and turned her thinking around.

"Sister Mary Ann reminded me of something," Clark said. "She startled me. She said, 'Remember, the person in the world who made the biggest impact on the world in all of history never had any children, never married.' That person was Jesus."

Several other Sisters of Charity of Seton Hill I invited were too busy with their ministry schedules to participate. Even those who agreed were overbooked. For 10 days at one key point in preparation, none of the sisters could communicate with me because they were busy in their annual meeting, or chapter.

In the middle of our eight weeks of planning for the National Catholic Sisters Week event, two of the community's elder sisters died. I can't imagine how it feels to lose two family members in quick succession and still press on with such a project. But they continued.

During the event, I sat in the sanctuary next to the sisters who spoke. I faced the kids in the audience and remained amazed and overjoyed at their attention to the sisters. I pray and believe that Standup Sisters will have some impact on these kids, the future of the Catholic church. I've heard that many vowed religious first get the call to religious life around second grade, so I was tickled that I might be a conduit for such a moment.

Sr. Barbara Boss was one of the speakers who told me that religious life first entered her mind in first or second grade. At the event, she recounted how she was led to join the Sisters of Charity of Seton Hill and to work as director of an intergenerational day care. She got to know the sisters as a congregation that attended school basketball games and that was involved in the lives of the families in the parish.

"They taught me from first grade all the way up through 12," Boss said. "They not only taught, but they built community."

As Catholic sisters in schools become rarer, it will be tougher for our young people to be shaped by the positive mission of faith, community and justice. My hope is that Standup Sisters will in a small way fill the gap.

I know it's continued to inspire me. Whenever I see news of yet more violence in our world, I turn to Sr. Barbara Einloth's story of a time when learning about the vastness of the world's suffering — things like the proliferation of homelessness and poverty — moved her to seemingly endless tears.

"I said to God, 'I'm just overwhelmed by all of this,' " Einloth said. "And God said, 'I know what you're going through because I see people's pain and I feel it. But here's my response: I love. That's who I am. That's what I do. I am love. I love. I don't run around trying to fix everything in the world. No matter what the situation is. I keep on loving. That's what you need to do.' "

Loving like sisters is what the Standup Sisters project can inspire all of us to do. I look forward to more opportunities to work with religious communities to share their stories.

[Jennifer Szweda Jordan is founder of Unabridged Press. She's worked as a journalist for more than two decades with small newspapers as well as The Associated Press and NPR. Follow her on Twitter: @JeniferPossible.]