In 2000, Sisters of the Precious Blood and priests from the Missionaries of the Precious Blood sat down and talked about what they had seen in their many years of jail ministry, community renewal, inner-city parish work, and retreat ministry. It was a diverse list of ministries, but they all shared one deep, central need that wasn't being met: reconciliation.

The ministries they had been doing were important and needed to continue, but it became clear there needed to be a ministry to work for healing. So in 2002, the Precious Blood Ministry of Reconciliation was born in Chicago's Back of the Yards neighborhood, rife with symptoms of poverty: gangs, violence, drugs and racial division.

The ministry works with youth to help them do better in school, find jobs, learn how to express themselves and break the school-to-prison pipeline. It also provides one-on-one support to mothers and families, as well as job training and educational opportunities. Twenty-five volunteers provide a ministry of presence several times a week at the Cook County Juvenile Detention Center, and they run art programs and an art gallery.

However, Liette, who has been with the ministry for eight years, has been getting all the attention lately. In October, she was featured on the debut episode of the morning show "Megyn Kelly Today." On the show, Kelly said she arranged donations so the ministry could purchase a second house in the neighborhood to renovate into space to help more families.

The ministry had already purchased and renovated one house to use as an emergency shelter for families. It wants to use the second house for a women's center and an early-learning center.

GSR: Flying to New York to appear on a television show must have been exciting.

Liette: It was very exciting. It was a surprise and a very valuable experience, and I love Megyn Kelly. She made sure we have a start for the next house we want to buy. Now we just need to raise the money for the renovation of that house, but it's a great start.

I think the most important thing about the whole thing was, I was embarrassed because I didn't want it to be a story about me, I wanted it to be about the ministry. When she wanted to talk about the mothers I work with, I said, "Well, put them on the show!"

So she flew six of the mothers to New York. For them to be able to go to New York and have their own hotel rooms, to be at Rockefeller Center, be on the show, they were all made up — it was really special for them.

And Megyn, she came to Precious Blood Ministry and sat with our mothers and really listened to them.

Those mothers are very special to you, aren't they?

It started when I was doing prison ministry, and all these boys I was visiting would talk about their mothers.

"I wish I'd have listened to my mother," they'd say. Or, "I'm worried about my mother" and "Tell my mother I'm sorry."

So I started a monthly reconciliation circle for the mothers. It started with just mothers who've lost children to incarceration. The shame, the guilt, the isolation they feel. It's of course very painful when you've lost a child to violence, but everyone kind of sides with you. When your child has taken the life of someone, it's a different story. How do you reconcile that pain?

Then I tried to bring them together with the mothers who've lost children to violence. It wasn't easy at first. But they listened to these mothers talk about how hard it is to travel six hours to see your son for two hours and then have to walk out and not be able to take them back with you. And one of the mothers who'd lost a child to violence said, "I see now that you've lost a child, too."

"Listening" is the key word. You can never bring reconciliation unless people sit down and listen to each other.

We have had some very strong reconciliation circles. Of course, first, you have to reconcile with yourself. We try to give them an opportunity to really speak their truth through the spoken word or through poetry or art. Because sometimes they can't really talk about their trauma. We all experience trauma, but they live in it.

How do you get people to open up, especially when they live in an area where violence seems to rule?

At the ministry, we have what we call "radical hospitality." We have people who come into our center who are, well, not always ready to be polite. They're hungry, they're traumatized, maybe they've run into our building after being shot at. They're not ready to be polite.

All of our boys have been shot or experienced a shooting themselves or know someone who'd been shot. We just lost one of our boys Tuesday morning [Jan. 9].

But they find it's a safe place. A place to be loved, to find themselves. I love being a grandma or great-grandma to all these kids.

A couple of years ago, you wrote about taking a group of boys to visit St. Joseph's College in Rensselaer, Indiana. That must have been a different world for them.

The boys just could not believe it. They said, "Where are the police?" They said, "You can just walk down the street and go to the ice cream shop and not be afraid?" They had never experienced anything like that.

They're incarcerated, really, within their own neighborhood. They can't go beyond this street or that street because it's another gang's territory and it's dangerous. They're afraid to get on the bus and go anywhere else. There are no jobs. There's hardly any stores here, any grocery stores. It's hard.

We hope we're making a difference, but sometimes it's hard to see. People feel like this is an oasis. We have a beautiful vegetable garden, a beautiful peace garden. There used to be no trees, no flowers. Now we have lots of flowers. It's a much prettier place.

People come and say, "This is so peaceful." Some will walk the labyrinth. We had a drunk who would walk it with his bottle, and when he died, there was a beautiful memorial, and people came and walked the labyrinth in his honor, remembering their friend. 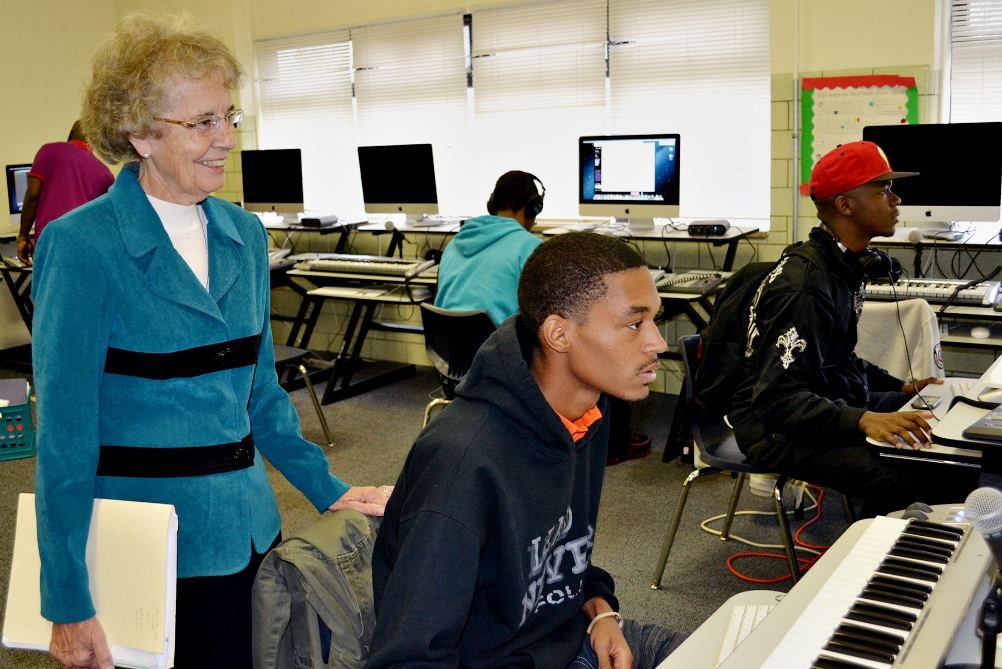 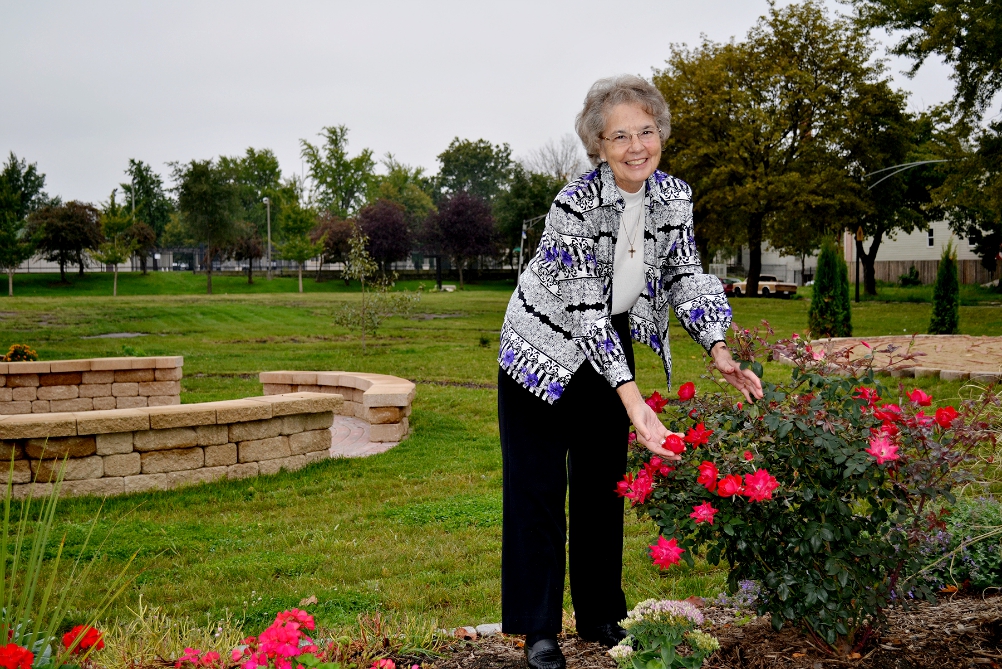 Sr. Donna Liette outside the Precious Blood Ministry of Reconciliation Center in Chicago: "There used to be no trees, no flowers. Now we have lots of flowers. It's a much prettier place." (Dave Eck)