Q & A with Sr. Kateri Mitchell, part of the miracle attributed to St. Kateri Tekakwitha 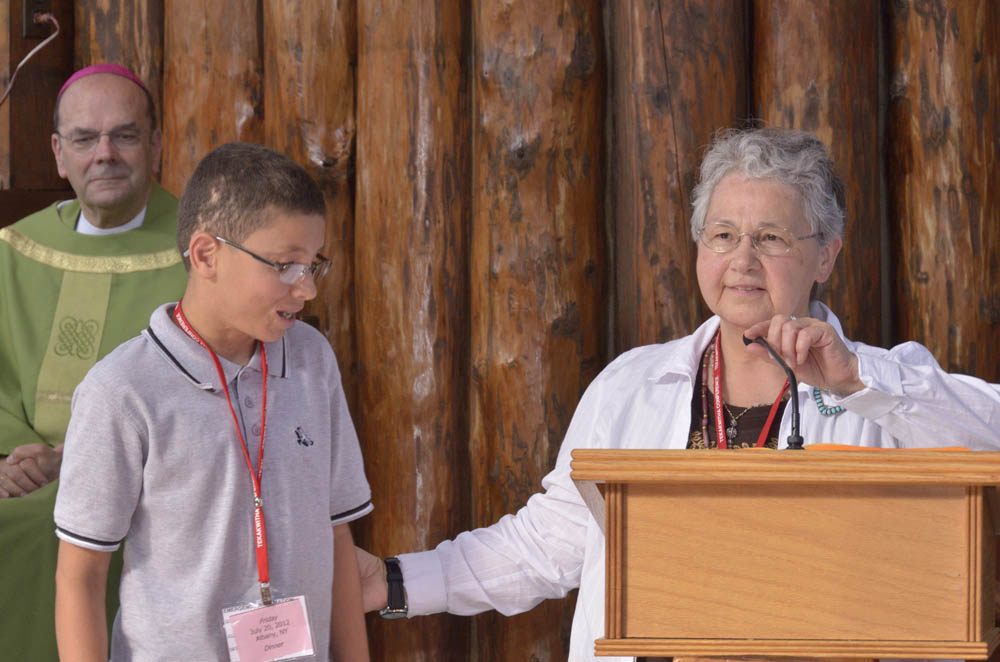 Jake Finkbonner, left, at a Mass in 2012 with Sr. Kateri Mitchell. In 2006, Finkbonner was healed of a deadly flesh-eating bacteria after being blessed with a relic of St. Kateri Tekakwitha, a miracle later certified by the Vatican and used to declare her a saint. (Courtesy of Sr. Kateri Mitchell)

Mitchell, like Tekakwitha, is from the Mohawk Tribe in New York. And her connection to the saint has been a lifelong one: Her family took trips to the Tekakwitha shrine when she was a child, and she was invited to attend the beatification of Tekakwitha in Rome in 1980, where she was presented with a first-class relic, part of Tekakwitha's wrist bone.

She placed that relic on a boy suffering from a flesh-eating bacteria, and he was healed — an event the church later certified as a miracle, cementing Tekakwitha's cause for sainthood.

For two decades, Mitchell, 77, has been executive director of the Tekakwitha Conference, an annual gathering for those who minister to Native American Catholics.

GSR: How did the Tekakwitha Conference get started, and how did you end up running it?

Mitchell: It began in 1939 in the Diocese of Fargo, North Dakota, when the bishop gathered his missionary priests together. They came together and talked about what they were doing individually and how they could move forward in ministry with the native people. They decided at that gathering that it was very beneficial and they wanted to continue meeting.

The following year, they met again, and it was suggested the gathering be named the Tekakwitha Conference. It was a suggestion of vision because Kateri Tekakwitha was not even venerated by the church yet. She became venerable in 1943. So here we are now in 2018, entering our 79th year as a conference. That in itself is a great milestone, especially for a small religious nonprofit.

I came aboard in 1998. I was in ministry in northern Manitoba, Canada, as far north as you can go. I considered myself an itinerant catechist — I still consider myself an itinerant catechist — so in my heart, I said, "I'll go and serve for three years." Here it is, my 20th year, and God is full of surprises and definitely has a sense of humor. I said three years, and God said, "You'll find out."

How did you come to be involved with the miracle attributed to St. Kateri?

When she was beatified in 1980 by Pope John Paul II, I went to Rome for the ceremony and was given a first-class relic that had been blessed by the pope. So since 1980, I have had this first-class relic, and any time I've been asked to attend healing sessions, I have always had it with me.

At times, people ask me to bless them with the relic. There have been so many favors granted in the time I've had it — men and women who have been healed from various addictions. There have been a lot of healings.

In 2006, I received a call from Seattle. A little boy living on a reservation had fallen and cut his lip on the rusted base of a basketball hoop, and it was just immediately inflamed with infection. The specialist in Seattle told the parents, "I'm very sorry, but I don't expect your son to last the night." Their parish priest asked his parishioners to pray to Blessed Kateri, and he lived through the night.

A week later, they brought me to Seattle Children's Hospital to bless him with the relic. His mother and I placed the relic on him, and I prayed a very short, spontaneous prayer to Blessed Kateri that he would be healed. I only learned later that he recovered; even the doctors couldn't believe it.

The bishop overseeing Kateri's sainthood cause asked me to write up the story of what happened, and later, I was interviewed by the tribunal investigating it. In December 2011, Pope Benedict XVI announced that a first-class miracle had been certified and that Kateri Tekakwitha would be canonized. 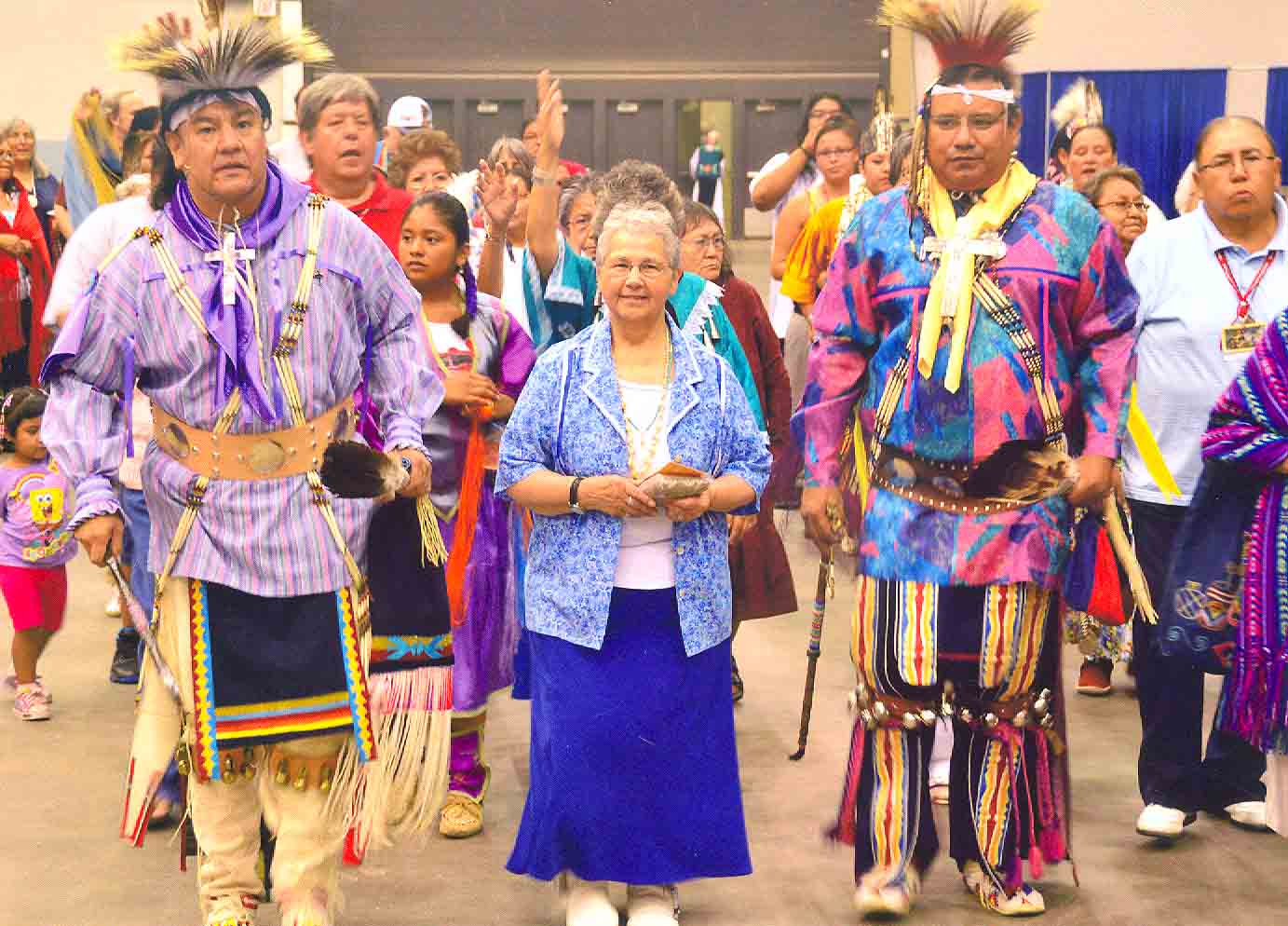 The word spread like wildfire in Indian country. Everyone was so excited. This was a time of jubilation. I was chosen to carry the relic in the procession.

She was our first North American native saint — that has meant a lot to our people. Here it is, 2018, and it still hasn't penetrated my being. All I could think of at the time was, "I'm carrying this relic on behalf of all my people of North America who have prayed for so long."

In August, you'll be retiring from the Tekakwitha Conference?

I'm just retiring from this position — I'm not retiring. I will be relocating to [the Sisters of St. Anne] headquarters in Marlboro, Massachusetts. I don't know what the plan is after that.

At one time, our reservation was really founded on Catholicism. We're all Catholics.

There was a movement throughout North America where many decided to follow the wave of cultural identity, and they thought that to really identify as a Mohawk person, they would have to follow the traditional ways, called "going longhouse," and not follow Christianity. Most of my cousins decided to follow that and tried to persuade my father. He said, "I appreciate you as my uncle, my aunt and my cousins; however, I was born and raised and baptized a Catholic, and I will stay a Catholic. But I will continue to respect you if you want to go another way."

The Tekakwitha Conference is set up specifically for ministry to Native Catholics, but it is not exclusively that. It is for ministering to all cultures, and all religious denominations are invited — no one is excluded.

Ministry | Q & A with Sr. Kateri Mitchell, part of the miracle attributed to St. Kateri Tekakwitha

The hospital that miracles built

When a meal is more than food: Sisters in India deliver hope to the elderly

Sharing my experience of 'God's smile'