Q & A with Sr. Liliana Franco, leader of women religious in Latin America, the Caribbean 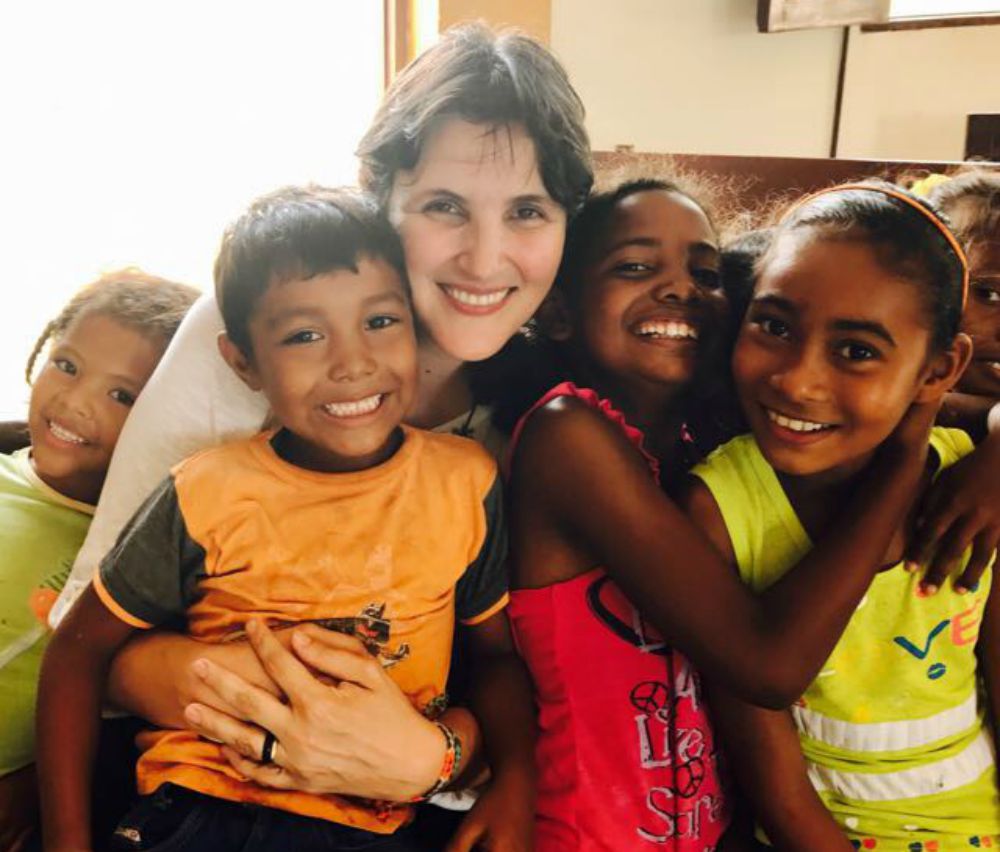 Sr. Liliana Franco spent time as a missionary in impoverished neighborhoods in Peru, teaching locals about the values of the Gospel in ways that might shed wisdom on the struggles and realities they confront daily. (Provided photo)

Sr. Liliana Franco sees the next three years as an opportunity for transformation for religious life in the Americas.

Originally from Medellín, Colombia, Franco currently lives in Bogotá in her congregation's provincial house. Past ministries included being a teacher, administrator, social worker and missionary. But now, her focus is on maximizing this moment in history for Latin American and Caribbean religious life.

"Supporting everything that has to be to do with inter- work — the intercongregational, interinstitutional, with others as well as within the church — is one of the great calls we have for this triennium," Franco said.

GSR: What initially attracted you to religious life?

Franco: From a very young age, I have wanted to be religious. The values of the Gospel always attracted me, and so to learn about the commitment of the consecrated life, their option to care for the poorest, of the accompaniment to the woman — since I was really little, I felt that the way in which I wanted to live my life was by being consecrated.

Did you know a sister, someone who invited you to get to know religious life?

When I was a little girl, I met the Missionary Carmelite sisters who lived right by my grandmother's house, and I was struck by the way they lived, how they made relationships, how they were committed to realities. Eventually, I met my community, the Company of Mary, and I got to go on mission trips with them and work with campesinos. I was very impressed by the way they lived, how committed they were to living the values of the Gospel and restoring human dignity in some lives.

One of the first missions I went on was with [Company of Mary Sr.] Teresita Ramírez of Medellín, who was martyred the same year that I entered my community. She was killed precisely because of her commitment to the poorest.

Were you drawn to a particular ministry or cause?

I've worked in different ministries. My first job was in social work in neighborhoods, supporting young people. I also lived as a missionary in Peru for a few years. I was at the Catholic University of Peru, working faithfully and joyfully. And the other part of my time has been involved in my congregation's work: working in its schools, teaching geometry, art history and religion; working with campesinos; working with young people; working for the dignity of women — that's my main one.

The work that you did with women and poor — tell me a little more about what those ministries looked like.

In Peru, we lived in a very poor neighborhood called San Martín de Porres, which had no water, no electricity. We held Bible classes with the women, showing them how the Bible can shed wisdom on their own realities, and we would have workshops with the women so that they can sell crafts, money that went for their own survival.

I have also worked with campesinos in a small town very close to Medellín, and together with the campesinos, we would accompany others to spread the word of God. 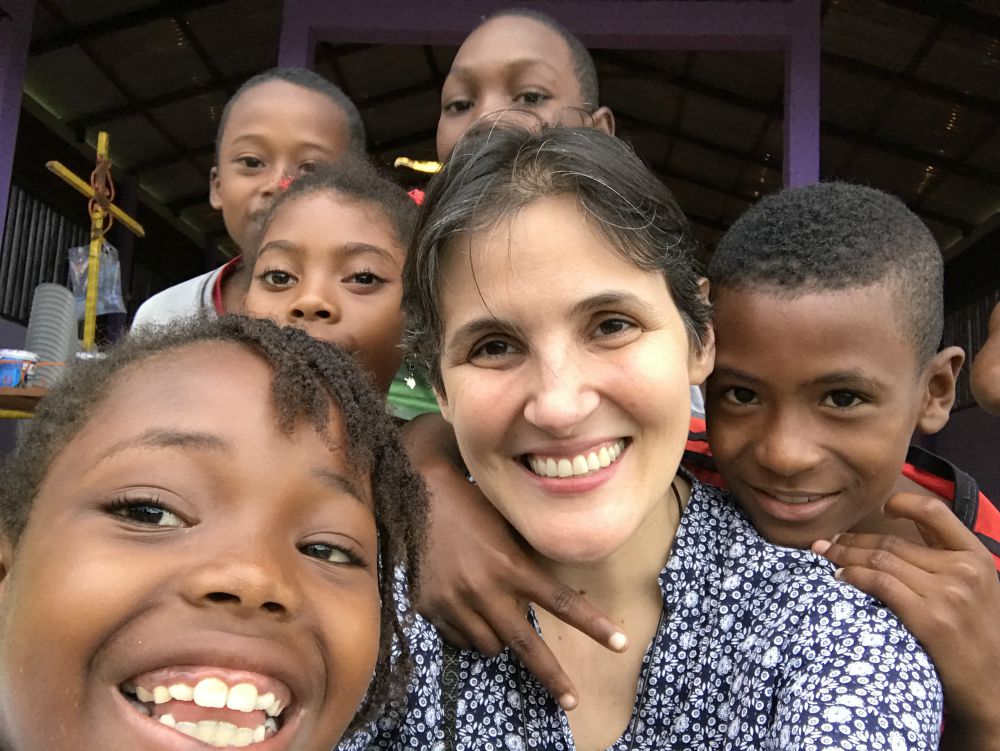 In addition to being a social worker and missionary, Franco spent years as an educator, teaching art history, geometry, or religion. (Provided photo)

I've always felt that our calling as religious is to be available and to serve where we're needed. At one point for me, that meant working as a rector of one of my congregation's schools, only to then be asked if I could serve as provincial of my congregation covering three countries: Colombia, Peru and the United States.

As provincial, I participated in the processes of the Conference of Religious of Colombia, and in one of the assemblies, they asked me to provide the service of animating the Colombian religious life. It has been a beautiful experience. I believe a lot in teamwork, in the power of complementing, in the possibilities of creating a journey with another, of joining forces in mission.

The whole time, I felt like I was accompanied by God in this service. With simplicity and a lot of humility, it has been a very beautiful experience that widens the heart and makes it possible to learn, to grow, to meet other people and to serve the church and consecrated life.

Has being in leadership changed your perception of or perspective on religious life?

I think so, because the scope of your vision expands. And when you know more, you love more, and the more you know and love, the more you commit yourself. So to get closer to other charisms, other congregations, other realities — it's broadened my vision of religious life.

The path of communion and intercongregationalism is a very important option for religious life today. The Americas and the world are experiencing so many complex situations: human trafficking, migration, the violation of human rights, corruption that is so great in our countries. As religious life, we ​​have to situate ourselves more prophetically.

I believe this triple dimension of consecrated life (the mystical, the prophetic and the missionary) is a dimension that we have to continue updating every day. The word that resonates is "synodality." 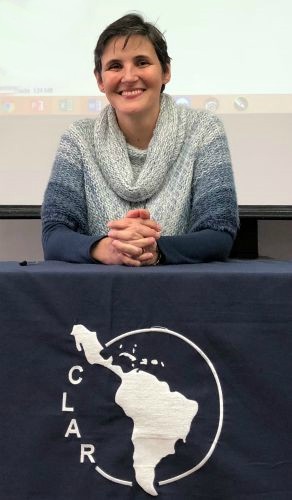 Sr. Liliana Franco, shortly after being elected as president of CLAR at the general assembly in Medellin, Colombia. (GSR photo / Soli Salgado)

Tell me about the conversation around the icon that CLAR chose for the next there years.

We feel that the fundamental thing is to be able to contribute to the transformation. Specifically, we saw that it's become necessary to learn a new way of being a church. That's why this is one of the great emphases that we want to make this triennium, including a focus on Trinitarian spirituality, the need to reconfigure and redefine consecrated life, all the work of caring for the human being, the dignity of the person, the planet, the commitment to the conservation of resources.

Are there obstacles that you anticipate for CLAR members in the sociopolitical realm?

One challenge is participation, of being present where the decisions are made that contribute to the improvement of public policies, of living conditions, of people. The voice of the religious, the voice of the church should resonate when decisions that mark the history and policies of our peoples are made.

I believe that the prophetic dimension is fundamental, today more than ever, because we are facing a world full of corruption that permeates all structures. We should contribute to shedding light on the truth, to ensuring justice, to actively participating in the processes of reconciliation that must be done in our countries [in Colombia, Venezuela, Nicaragua], to help people reconstruct the truth so that victims can be heard and heal through recognition. We have some very big challenges at a sociopolitical level.

And then there are issues that affect us all, such as illegal mining, the impact of so many macro-projects in the most influential economies in Latin America. I believe there must be a voice that we pronounce as a church. We can't remain indifferent to phenomena such as those of illegal mining, for example, and everything that is affecting the lives of our people, the health of so many people, the environment.

Do you have goals for your presidential team or specific opportunities you've already discussed and hope to seize in this three-year term?

The great challenge now is to listen to the realities of each of the national conferences that make up CLAR. In December we had our first meeting as a board where we assembled the "horizon," the global plan, for the next three years. In March, we'll have the next CLAR assembly in Santiago, Chile, which will also mark the 60th anniversary of CLAR.

But the goals and challenges are in line with what I have said: that we contribute to a new way of being a church, of making the path of synodality, of continuing the reconfiguration and redefining of religious life, of situating ourselves to the theme of the integral ecology and the commitment with the human dignity and the planet. That's why the challenges are great and continue from yesterday's challenges. Living out the Trinitarian spirituality allows us to be a religious life in mission, joining others, and being open and generous to this moment in history.

Ministry | Q & A with Sr. Liliana Franco, leader of women religious in Latin America, the Caribbean

Q & A with Sr. Lorelle Elcock, raising money for Dominican sisters in Iraq