Infants and children brought to the orphanage in Santiago for children with HIV and AIDS came for death with dignity, said Sr. Nora Valencia of the Franciscan Missionary Sisters of Jesus, the director of Santa Clara Home for the past 10 years.

That changed around 2000, she said, when a cocktail of drugs allowed the virus to be controlled, transitioning AIDS from a fatal disease to a chronic one.

"The children here, we hope, have as normal a life as possible," Valencia said. "Granted, it's not normal for a child to live in a shelter, but this is their home."

Valencia, with the help of four other Franciscan Missionary Sisters of Jesus and 30 lay employees, runs the Santa Clara Home, largely supported by the Santa Clara Foundation, of which she is president.

Babies arrive as young as a week old, born to parents who are HIV-positive, "and since the mom didn't take care of herself during the pregnancy, the baby is given over to us," Valencia said. That way, they can avoid the possibility of the mother feeding her baby contagious breast milk, for example.

While the home looks after more than 60 children, most of whom are infants, only 17 live in the orphanage. The others have been sent back to live with their families but remain in contact for a certain level of care.

If after five months the baby is healthy and the mother has proven herself responsible and capable of looking after the illness, Santa Clara Home works to ensure that she gets her baby back. But when mothers don't visit the baby often, neglect check-ups or treatment, or don't take care of themselves, Valencia said, they look into putting the baby or child up for adoption.

"The few older children we have are here because their mother hasn't been careful in her treatment," she said, adding that adoption is particularly difficult when few potential parents are interested in older children, especially those with an illness. "So they stay with us, and we pray every day for a miracle that their families or a family appears for them."

GSR: Tell me about the kids who stay in the home past infancy.

Valencia: Lately, we've been receiving a lot of babies — two in the last couple of days — but if after six months, they test negative, they can go back home. The ones who stay a while are the older ones, because that's when the doctor tells us it's time to teach them how to be responsible for their own medication.

How do you teach a 5-year-old who doesn't know how to read how to take care of his treatment? That process takes a little longer. We teach them to associate a TV show or time of day to taking their medication. That is with our supervision, which is fine, but in their homes, we don't know that happens. So we applaud them every time they remember their medicine or for not putting up a fight when taking it. But at home, that doesn't necessarily happen; that's what we're for. We only have one 16-, 17-, and 18-year-old.

What are some of the biggest challenges in this ministry?

Where we have experienced the biggest difficulty is telling them — even though it's true — that they're just like any other kid, with the same dignity. They need to understand their value every day. They want to hide their illness because it isolates them and they don't have friends. That's where the problem lies: Society still discriminates against people who live with HIV.

Another challenge is making people understand that the children are not a chore. And there's less discrimination than when we started in '94, but it continues. That's why we don't have a logo or anything, because we don't want the kids at school to be associated with HIV. The home just says "Santa Clara, for special kids," but not what kind of home. In the beginning, neighbors saw that and wanted them gone; that is, until they found out they were children. Then the attitude changed.

Do you struggle with parents who don't want to give up their child?

Always. With parents, it's very difficult for them to admit that they weren't good parents and that their kid is there because of their fault, not ours. I tell them, "I didn't go to your house to take your kid away. He was brought to me; it's not our fault that you're not with your child." The one who suffers most is the kid because parents can continue their routines and go about their day; it's the child who is taken from his home and brought somewhere they don't know. The kid is the one who suffers.

Tell me about how the transition is for children when they're old enough to understand they're being taken from their homes.

The child has the grace of adapting easily. The kids who are already here are very much in solidarity with the new kids. When the mother leaves for the first time, the kids protect each other very much without anyone even asking; it's natural for them. They accompany, protect, calm one another. "Your mom will come back, don't worry, we can play and watch TV for now" — they entertain them so they can forget about their sadness.

There's also some strategy with the older ones, like ages 5 or 6 who arrive, they get the keys. Sometimes, when their mom leaves, they spend a lot of time looking for her, wondering where their mom went. With the keys, we can say, "Look, let's go walk your mom out," unlock the front gate; they say goodbye to their mom and she leaves, and they understand that she left, not that she's hiding and will appear any second.

A lot of moms say, "Don't let him see me leave!" But no, it's best that they see her walk away so they understand she's not here, hiding. So now they ask for the keys so they can walk their mom out. The ones who have been here for a while have developed sympathy for those who are new and have to say goodbye to their moms, and they look after them with solidarity.

How often do parents visit? What do those visits look like?

When they're babies, mothers can come every day; when they're a little older, three times a week, plus Sundays. That's because this small house can't have all the parents here at the same time. And when they come, we don't just let them sit on the couch and watch them play or come over to nap. The idea is that they come and be parents in that moment. So we observe how that goes with them and how they are with their kids. They're taking the responsibility of being parents all over again.

A lot of times they come, sit down and watch them play, but there's no interaction. Or they'll tell us he needs a diaper change, and we say, "Well, change him. He's your kid. That's what you're here for — to be the parent for a few hours today. If it's lunchtime, feed him. If it's bath time, bathe him. If it's naptime, put him to sleep. Be a parent, not a spectator on how their day is going."

Here, there are miracles every day. When we receive the children or babies at first, sometimes they're in the AIDS phase, in terrible health. But then you say to yourself, how much longer will we delay making him better? How long will we put off making sure this kid can live and live well? When a kid is hurt or isn't feeling well, the whole team springs into action to ensure they feel better.

We've had good experiences with the school, and the kids invite children from school to come over here to play or to come here for their birthdays. Before, kids wouldn't come, but now they do. So that fills your heart.

Recently, a journalist came here and covered us on TV. A teacher recognized me on TV and asked, "Are you the sister from the shelter of the student who goes here?" And this person figured, if my student lives with that sister, they must have HIV. So we went there and told the principal, "Look, we don't want this to create a problem. We don't want him discriminated against or for this news to spread so this kid can continue being treated just the same."

One of my greatest satisfactions after the conversation with the teachers was that all the questions were about the child: Will he one day stop taking medication? Will he one day have healthy children? Will he be cured one day? It used to be, when you went to the schools, that the questions were like, how might I catch it? What happens if he bites me? If he bleeds and I take care of him or if he scratches me — all their questions were about "me" and what would happen to "me." But that day, all were about the kids. And all the teachers were young, so I thought, these teachers are the ones who will change how we think about HIV tomorrow. 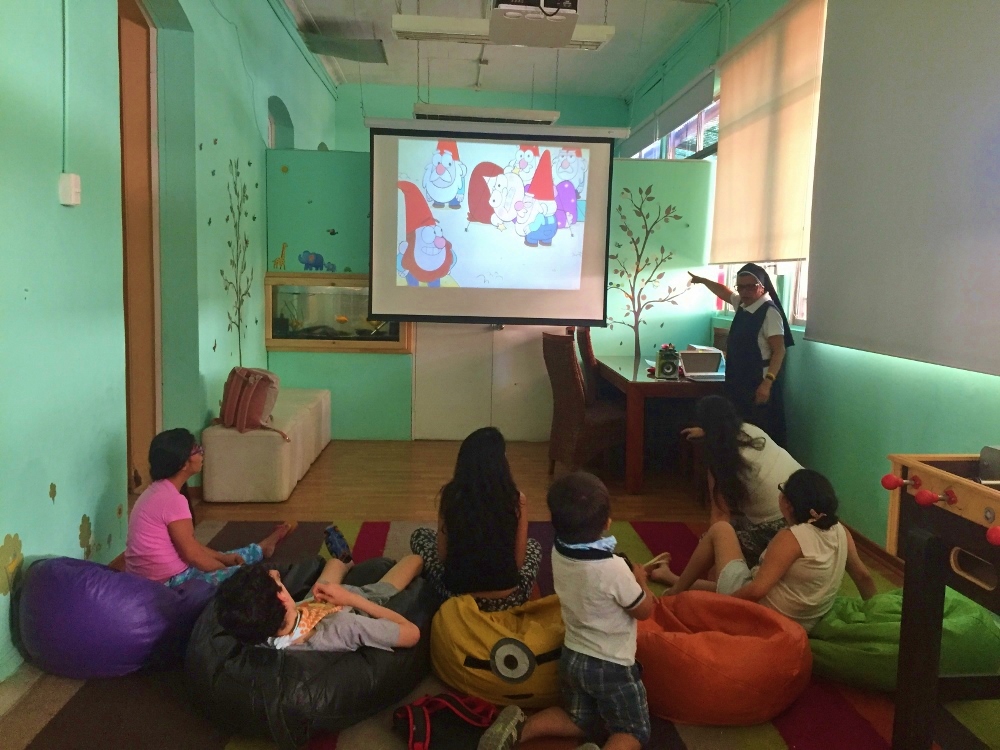 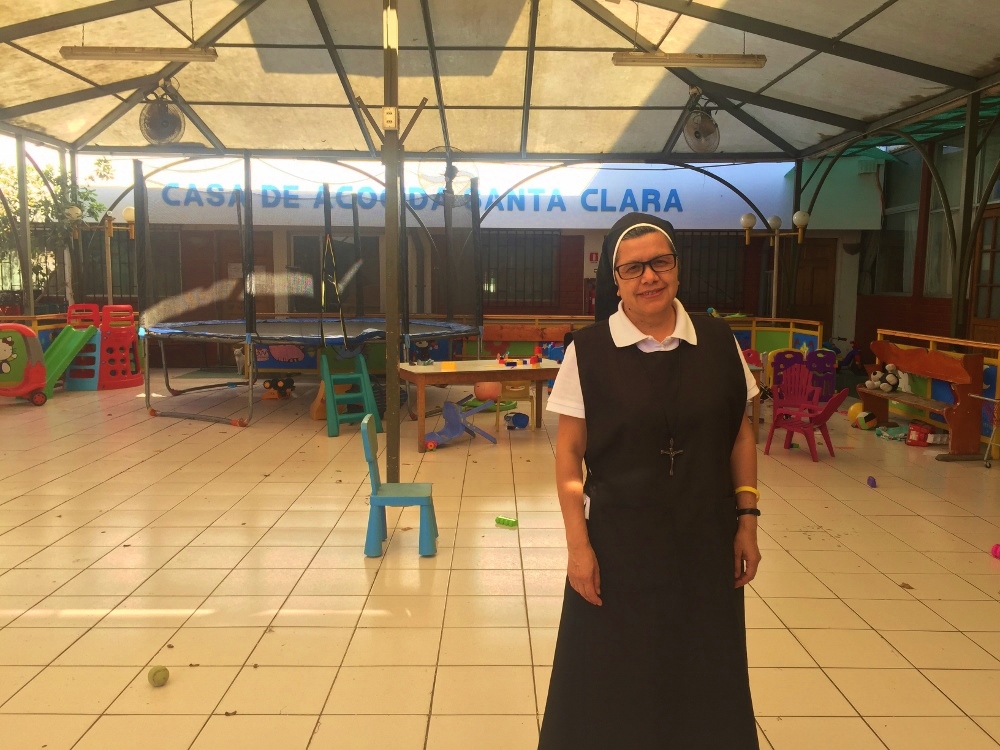 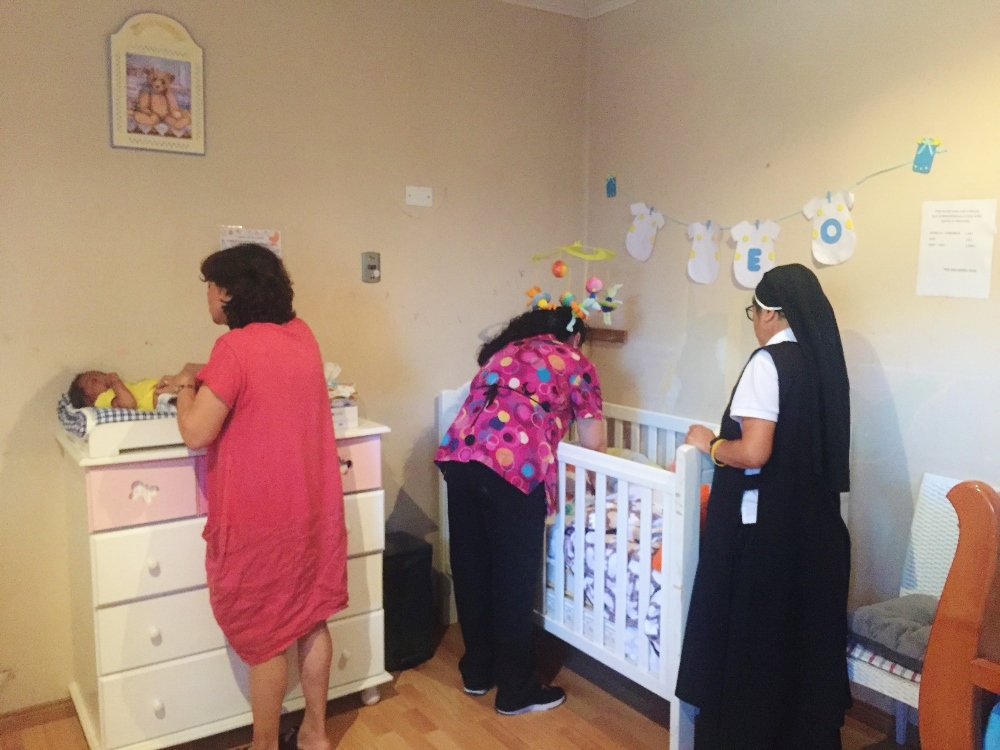 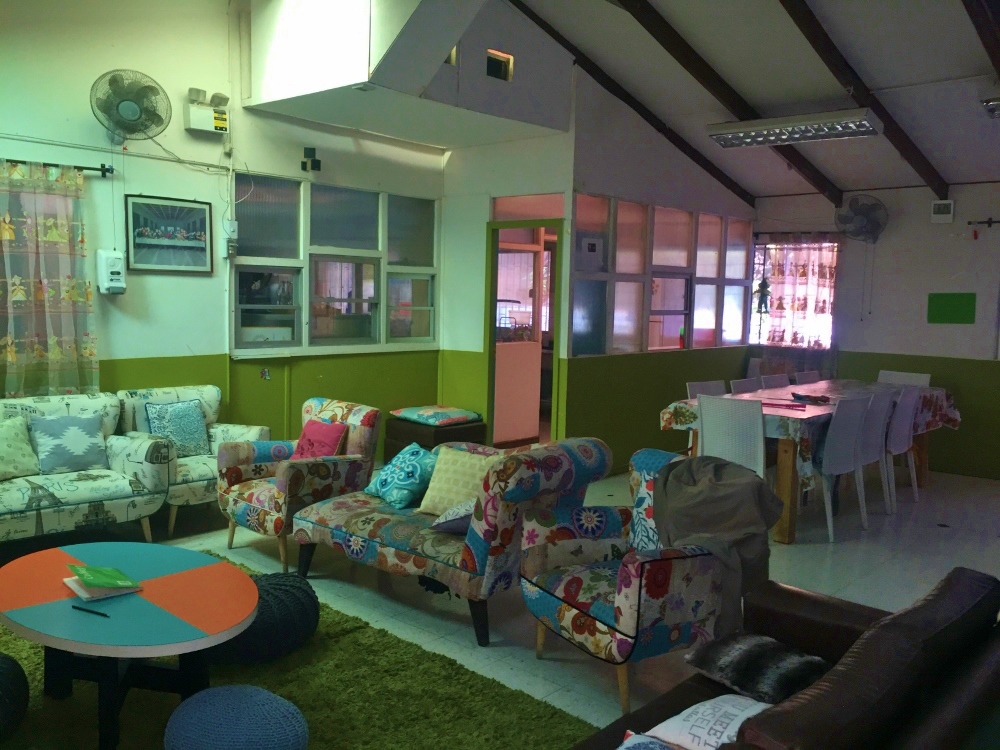 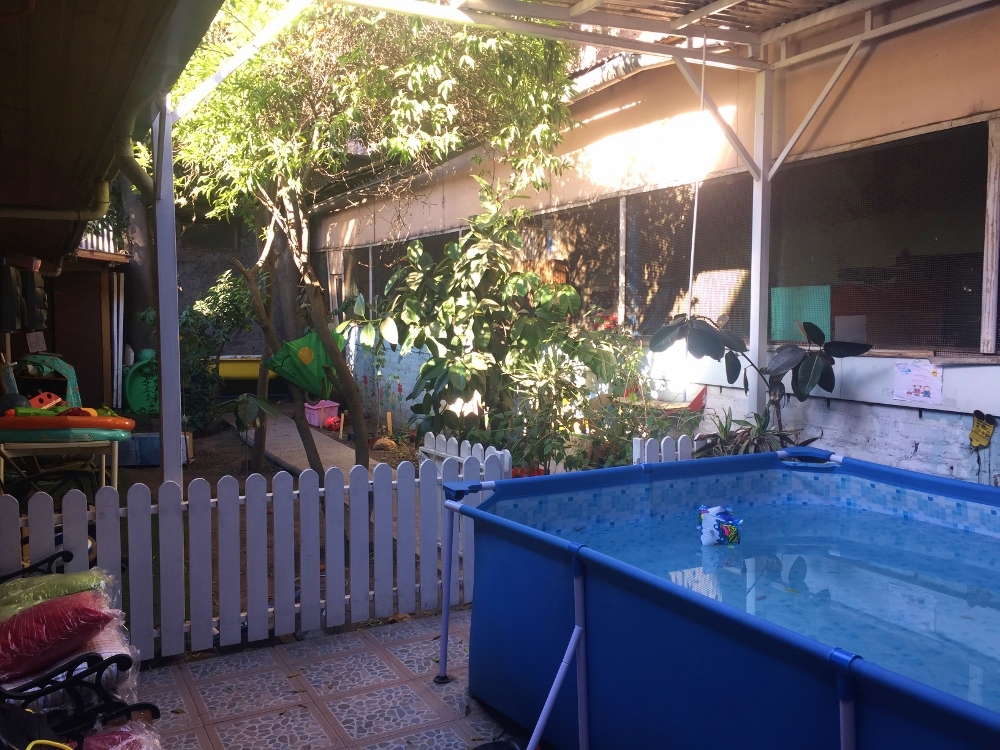 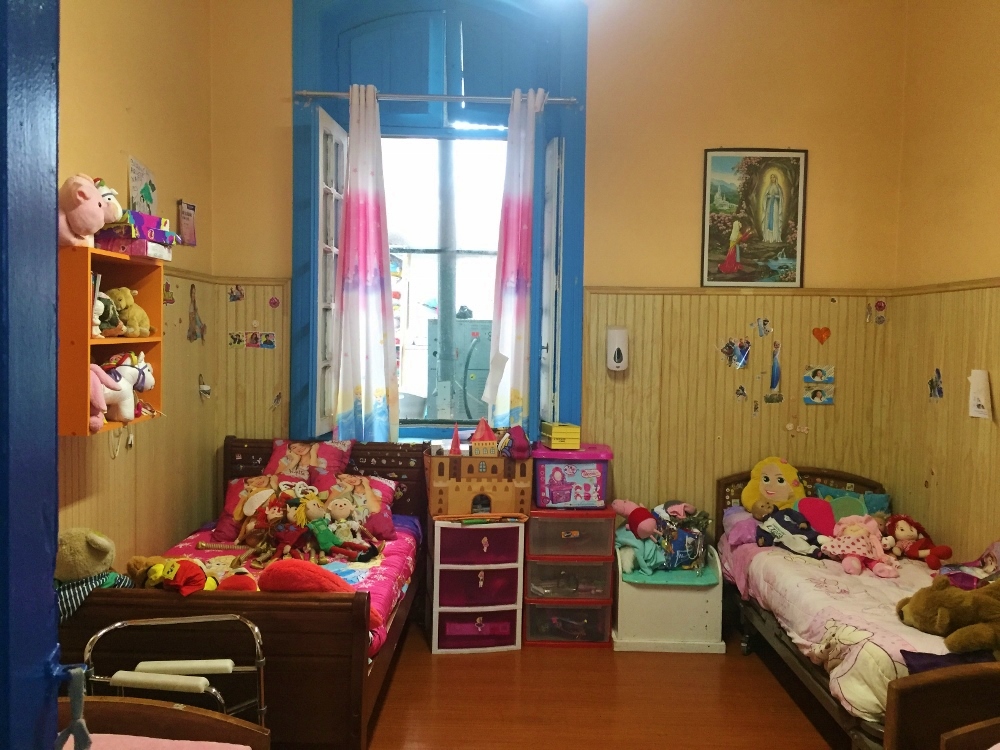