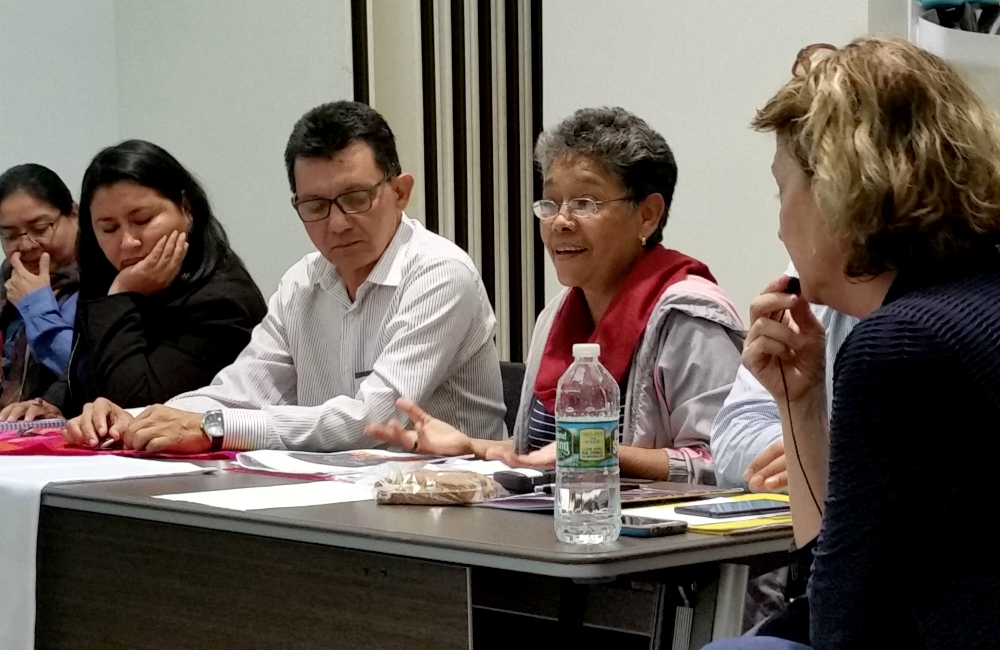 Sr. Rosa Maria Trochez of the School Sisters of Notre Dame gives a presentation to representatives of the interfaith community May 18 in Washington, D.C. (Courtesy of Ann Scholz)

Silver Spring, Maryland — Sr. Rosa Maria Trochez has worked for most of her 37 years as a School Sister of Notre Dame to empower women in her native Honduras.

But she told members of the U.S. Leadership Conference of Women Religious at a May 16 presentation of her deep worries about the broader political climate in Honduras, including the disputed 2017 presidential election, the repression of human rights, and the fate of Hondurans whose temporary protected status in the United States has been rescinded.

Since a 2009 military coup that deposed President Manuel Zelaya, the political situation and human rights abuses have worsened, according to Human Rights Watch. The killing of environmentalist Berta Cáceres in 2016 highlighted Honduras' record as one of the worst countries for retribution against environmental and human rights activists.

Trochez was part of a delegation of human rights activists who spent May 9-18 raising awareness about the conditions in Honduras across the United States. Among the delegation was Jesuit Fr. Ismael Moreno Coto, popularly known Padre Melo, whose championing of human rights through his ministry at Jesuit-owned Radio Progreso in Honduras has resulted in death threats.

The delegation spent May 17 and 18 in Washington, D.C., where they met with members of Congress and held a vigil for Cáceres along with members of her family. Members of the delegation also made presentations to various church and religious groups about the situation in Honduras and specific proposals, such as raising money for bulletproof glass for Radio Progreso's offices.

The delegation also encouraged U.S. legislators to pressure the Honduran government for new elections after the Organization of American States found voting irregularities in the 2017 presidential election won by Juan Orlando Hernández, including "deliberate human intrusions" in the computerized voting system. The Trump administration recognized Hernández's victory in December.

Trochez decided to commit her life to working for human rights after an experience in 1975 while working in a parish in Juticalpa in eastern Honduras. She witnessed members of the Honduran military kill two priests working in social reform in the area, was arrested in a roundup of those working in the parish and taken to prison. She later learned of the killing of 14 people she knew or knew of who had been working for agrarian reform.

She has participated in protest marches since the disputed election and is helping families who have been victims of post-election violence as military and police forces have clashed with protesters.

This Q&A is compiled from Trochez' May 16 presentation, questions asked during the forum and an interview with Global Sisters Report afterward.

What is the situation in Honduras?

Trochez: We have been going through a very deep place of misery in Honduras since the coup in 2009. We are now one of the poorest countries. We have a lot of unemployment, homelessness, little possibility of education, no access to health care. Few kinds of employment pay a minimal salary — below what you need to buy basic food to live. 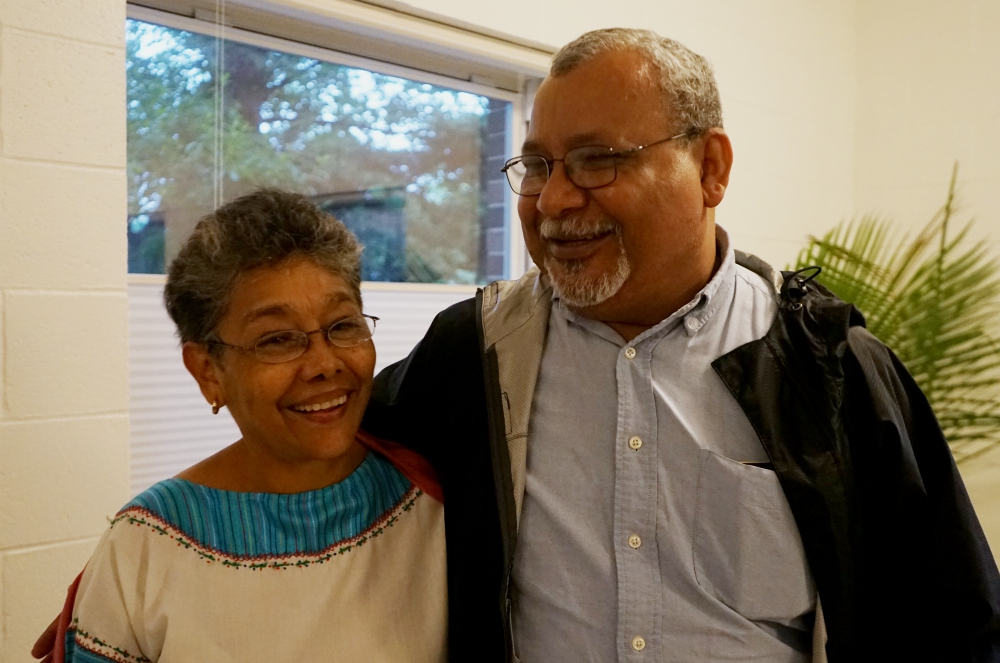 Sr. Rosa Maria Trochez and Jesuit Fr. Ismael Moreno Coto, popularly known Padre Melo, were part of a delegation from Honduras who traveled to several cities in the U.S. from May 9 to 18 to raise awareness of the political and human rights situation in Honduras. (Courtesy of Mark Coplan)

The U.S. is now taking away temporary protected status for Hondurans. What are those people going to do, and where are they going to go when they are sent back to Honduras? Since the re-election of Hernández in November, 300 people every day are leaving for the U.S.

How has the situation in Honduras changed your work?

For almost all of my years, I have been working with women — older women as well as very young. Our dream is that every woman would be able to reach her highest potential. Most of our work is with very poor women. But with what is going on right now in Honduras, we also have a network of women who are psychologists, lawyers, doctors and teachers. We are a network of women who train other women for leadership in human rights work. For many women who never would have had a chance to study, we are finding ways to open the door for them to go to university.

What happened in the election, and why are people protesting?

The president had purchased a technical system that would control the election in order to say it was going to be a transparent election. They had all this great technology. But as the votes were being counted and first word was coming out that the opposition candidate was winning in a way that could not be reversed, they still had some votes to count and the system went down. It was a very expensive system, maintained by a U.S. expert, and it was down for 10 hours. The people were getting angrier. After 10 hours, a "miracle" was announced — [Hernández] had won. People went to the streets, and he used his power to repress them.

What has happened since the election?

More than 190 protests have been going on throughout the country. The people who are supposedly collecting information said 22 people had been killed, but we believe more than 100 were killed in the protests.

Human rights groups were trying to collect the information, but people were afraid to go to the human rights organizations and say, "Someone in my family has disappeared." Bodies were found in bags and under bridges. Many young people were killed. Fingers were cut off to get rid of fingerprints so they couldn't be identified, but some had tattoos, so they could be recognized by their family.

I am speaking as if it was in the past, but it is our present. Right now, the police are in the streets. The strategy of the government is to keep the people in fear. The media and methods of communication in the country are afraid and totally in Hernández's control.

How would you describe the nonviolent strategy of resistance in Honduras right now?

In the marches, there are older people and children and a lot of women, and nobody has any guns or weapons. As soon as we start a protest, immediately we are confronted by the military, which has arms and are ready to shoot.

They use this force against people, no matter what. There is a small group of people that have vests that say "human rights defenders" — lawyers — and when the police surrounded a group of students and a group of defenders came to help the students, police shot them in the face with tear gas. This happens publicly, right in the open. 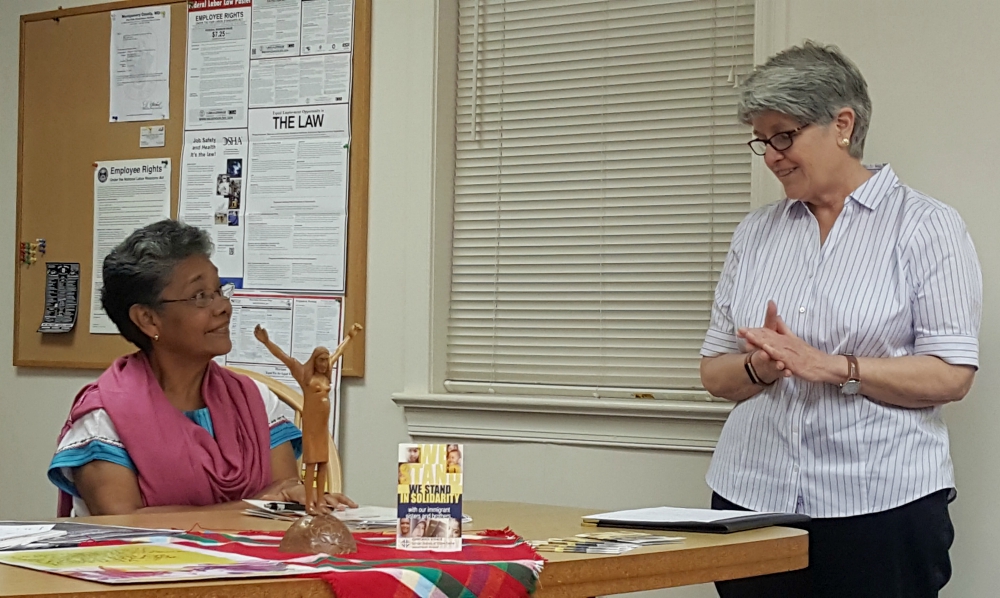 Sr. Rosa Maria Trochez, left, and Sr. Ann Scholz, both School Sisters of Notre Dame, at the May 16 presentation to the Leadership Conference of Women Religious in Silver Spring, Maryland. Troches received the statue of a pregnant woman from the husband of a woman whose baby Troches delivered when Troches was a midwife. "[Women] have more strength and courage, and the struggle has the face of women," she said. "They are natural leaders, and part of it is they have children. They really believe this is the time for Honduras to fight for the future." (GSR photo / Gail DeGeorge)

Everybody is resisting. Somebody asked me, "Aren't you afraid to speak?" And I said, "No, I am afraid not to speak." That's how the people feel. We cannot just sit there, and you all can't keep quiet, either. I am here because we need you to be our voice. When they have marches, I walk in the marches, and I have inhaled a lot of tear gas.

What is your message to members of Congress?

We also will ask them to help us demand the release of political prisoners. Our political prisoners are people who have been put in jail trying to protect their own rights. We also want to have them help us investigate the people who are killing our families and causing these problems. We want some help stopping what is happening now and then have another election.

We'd like you to help convince U.S. legislators that they don't need to run our country, that we have the ability to run it ourselves. This president is president because the U.S. said he could be president. They talk about the terrible conditions in Venezuela, but they don't say anything about what is happening in Honduras.

What is the church hierarchy saying?

I would say the church is in the streets; the church is the people in the streets. The hierarchy is another thing. They don't have anything to say about what is happening in Honduras. People are very bothered by the indifference of the church. When doing graffiti, instead of "cardinal," they write "cardi-mal." [Mal in Spanish translates to "bad" in English.] But we are people of great faith and know that God is with us, and we do not doubt that.

How do you view U.S. immigration policies and the rescinding of temporary protected status?

We are all brothers and sisters. We shouldn't have borders. The world itself doesn't have borders. Honduran people who are in the U.S. aren't asking for money. They are working hard. Asking for political asylum is a right. With the elimination of temporary protected status, they will go in one door to Honduras and leave from another door because there is no way to live in Honduras now or more people will die. We will also lose money that Hondurans in the U.S. send to their families.

How do you keep your spirituality strong in such a difficult situation?

The only thing you can depend on is God. God is the only force for us as we walk with the people. We don't have any other recourse except God.

My vocation, my deepest relationship with God, was born in jail. When I was in jail, somebody gave me a Bible, and the part that I read said, "This is the fast that I ask of you: to break the unjust chains, to share food with the hungry" [Isaiah 58:6]. After the deaths of the priests and after they had rounded up the leaders of the church — in jail was born my commitment to always work for human rights.

*This story has been updated to correct the spelling of Sr. Rosa Maria Trochez's name.

Ireland honors two sisters for their work around the world

While keeping their distance under lockdown, sisters adjust with grace