Of echoes and holograms, Pope Francis' words and what Nuns on the Bus heard on the road

by Jan Cebula
This article appears in the Nuns on the Bus and Francis in the United States feature series. 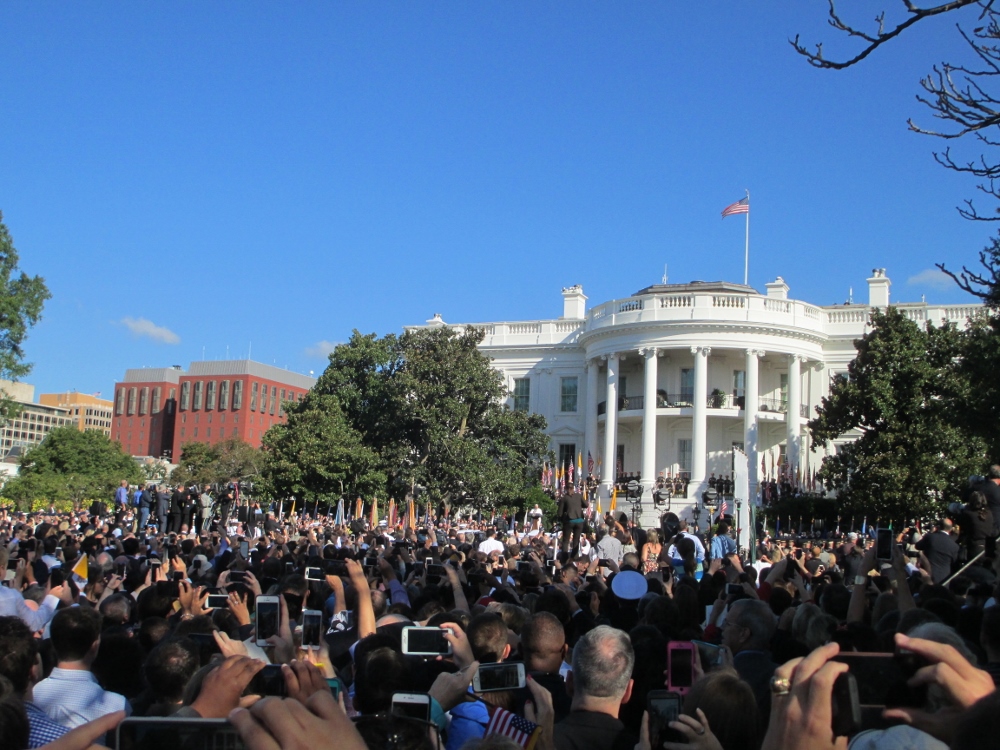 Nuns on the Bus watching Pope Francis' with the crowds on the White House lawn Sept. 23. (GSR photo / Jan Cebula)

As we Nuns on the Bus gathered at the NETWORK offices from the West Lawn of the Capitol where we had just listened to Pope Francis address Congress , we were overwhelmed. The air was electrified by our excitement, joy, gratitude and our resolve to carry on.

"Oh my goodness. What a blessing! And what people he lifted up. Wow!” exclaimed Oldenburg Franciscan Sister Robbie Pentecost, referring to Abraham Lincoln, Martin Luther King, Jr., Dorothy Day and Thomas Merton. "It was great because there were a lot of people around me who felt excited about the same kinds of things. It was just outstanding."

Notre Dame de Namur Sister Eucharia Madueke, who is from Nigeria, shared her enthusiasm, “I think he said it all. I'm thrilled that he had the courage to say what he said and that [a] large number of people [came] — I looked at the crowd and said, Oh my god, this is a whole lot of America.”

After stating that Pope Francis “hit the issues that were important to us as a nation and as a world,” Sister of the Living Word Mary Joel Curcio commented that his address was like hearing “echoes from the Bus.”

Daughter of Charity Sister Mary Ellen Lacy had a similar reaction, “I feel like he just reiterated everything that we as sisters on the Bus and sisters in general have been pushing for, and I think that his coming here and stating the same ideals and same things is just a total confirmation or affirmation that we're all living the Gospel values in the same way.” 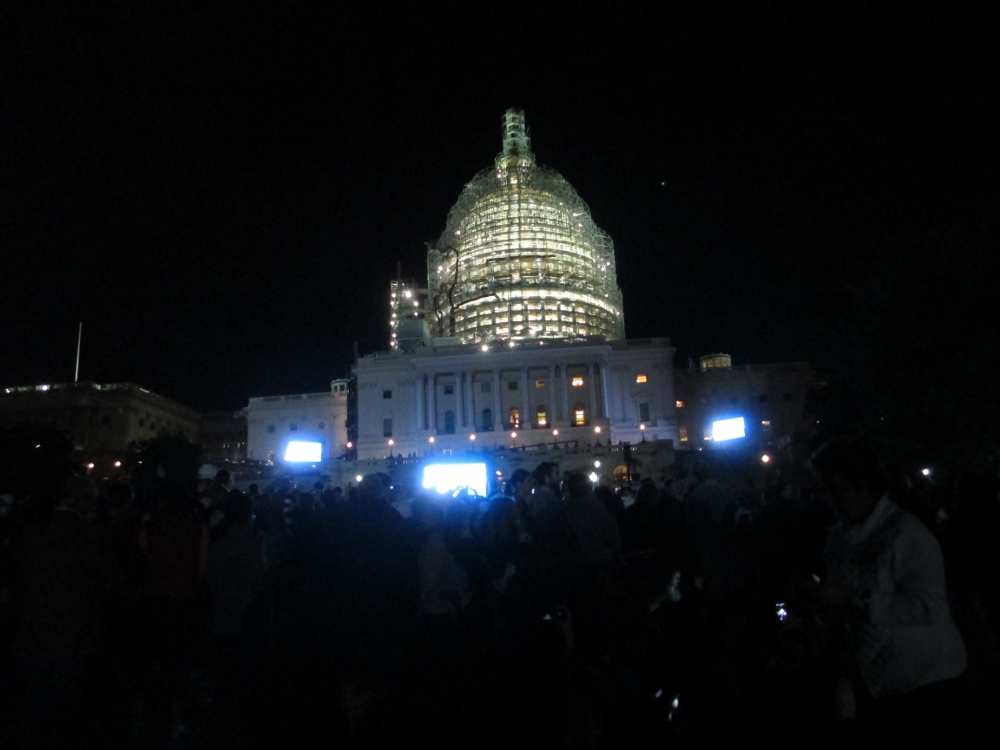 In order to get a spot at the U.S. Capitol, people had to arrive before dawn Sept. 24. (GSR photo / Jan Cebula)

Yes, various themes from Pope Francis’s words echoed our Bus experience. We had just completed an amazing “Bridge the Divides; Transform Politics” trip through seven states and 13 cities with 33 stops. We went to talk with people, hear their stories, provide a space for conversations and learn how they are bridging divides.

Francis’ words, “The contemporary world, with its open wounds which affect so many of our brothers and sisters, demands that we confront every form of polarization which would divide it into these two camps,” and ,“It is my duty to build bridges and to help all men and women, in any way possible, to do the same,” echoed the theme emblazoned on the side of our bus.

Dialogue was a recurrent theme of Pope Francis. He used the word six times in his address to Congress, expressing his desire to dialogue with the elderly, youth, working people, all people of the U.S. through the historical memory of our people, with countries at odds, for ending the armed conflict and with all people about “our common home.”

Pope Francis’ words echoed our experience at every town hall when people stood up and expressed their desire to have similar conversations with an even more inclusive group.

“Common good, solidarity, cooperation, and fraternity,” words used often by Francis expressed the yearnings of people we met all along the way. 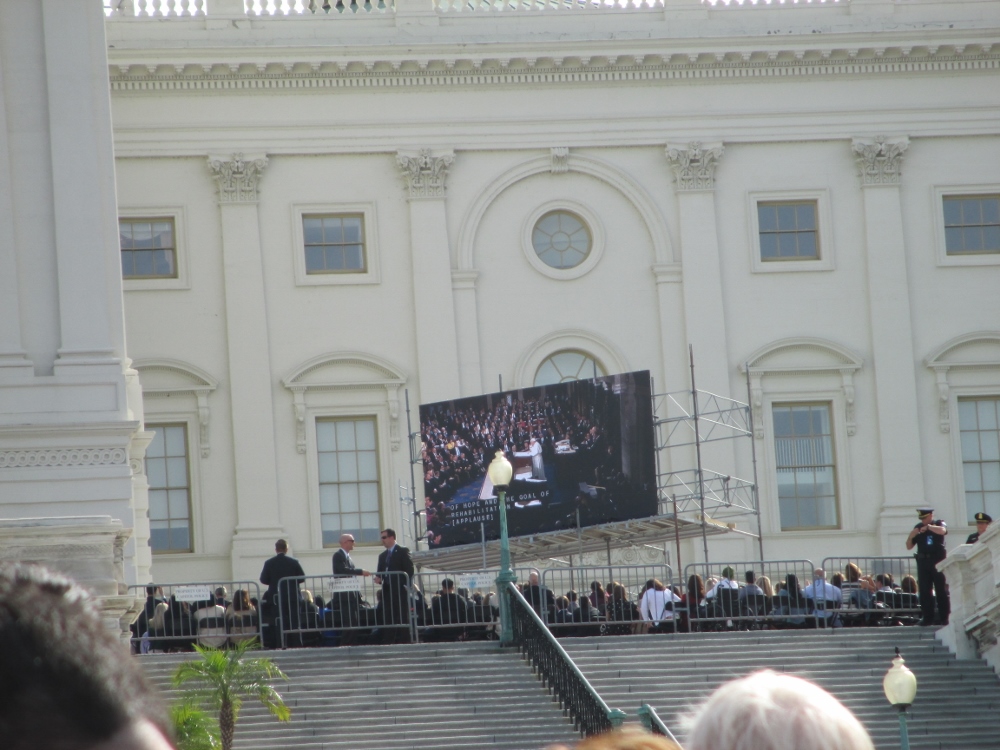 In speaking of the refugee crisis, Pope Francis said “We must not be taken aback by their numbers, but rather view them as persons, seeing their faces and listening to their stories, trying to respond as best we can to their situation.” Katherine’s heartbreaking story in Kansas City, the women serving the immigrant community in Nashville, the Polish immigrant’s experience of feeling excluded in Evansville, our meeting up with the 100 Women, 100 Miles echoed.

“Now is the time for courageous actions and strategies, aimed at implementing a ‘culture of care’ and ‘an integrated approach to combating poverty, restoring dignity to the excluded, and at the same time protecting nature.’” Our stops at Thistle Farm, Growing Places Indy, Mid-Ohio Foodbank and Grow Ohio Valley, Farm 18 echoed.

And we rejoiced with House of Hagar Catholic Worker as Francis lifted up Dorothy Day as an example of working for justice and the dignity of the person.

On the flight back to Kansas City while I was reflecting on the experiences of the day, I started thinking about holograms. They are three-dimensional images, every part of which contains the image of the whole object. I think of it as every part being a whole in and of itself, yet part of the larger whole.

It seems a fitting image for Pope Francis and his call to each of us. He always is so personal, cautioning us to look beyond the numbers, into the faces and hearing the stories of the individuals. His compassionate outreach recognizes the dignity of each and every person. Yet he reminds us that we belong to a larger whole; we are interconnected to everyone and Earth herself. Repeatedly he talks about subsidiarity and honoring cultures. 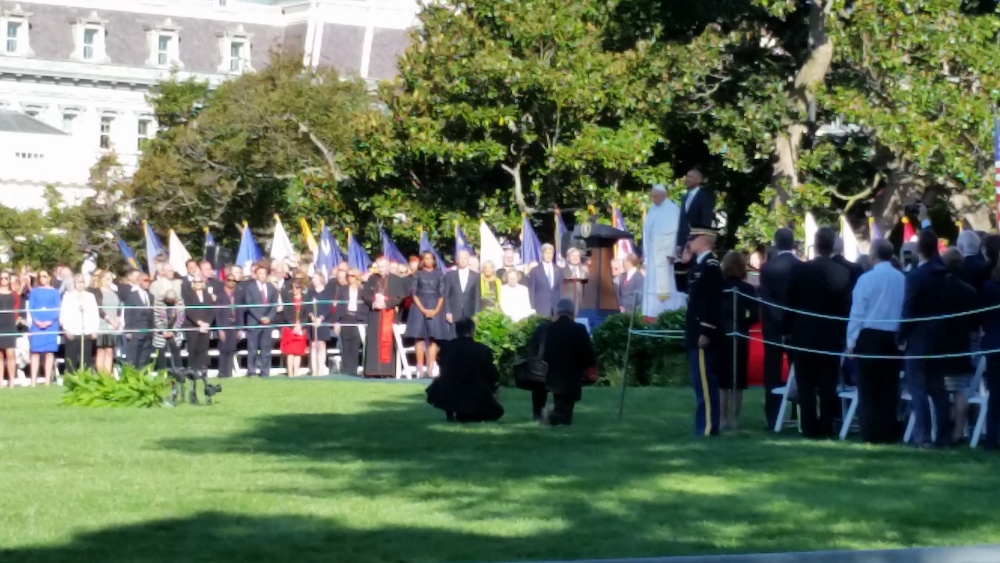 His address to Congress was a great example of how we can think about our U.S. hologram by highlighting our common values. He called upon us to “draw upon our deepest cultural reserves” by raising up four of our own, in addressing the critical issues of today. He emphasizes an integral ecology, making the connection between the marginalized persons and care for creation. All the while, he reminds us of the spiritual dimension.

And then Friday morning, I watched Pope Francis image a global hologram in his address to the General Assembly of the U.N. when he talked about the importance of international law, justice being essential to universal fraternity, balancing the power structures, and the rights of those excluded and even of the environment. He cautioned against the temptation to engage in just words and declarations, calling for immediate, concrete, practical and effective action, particularly with regard to the implementation of the Sustainable Development Goals and the total elimination of nuclear weapons.

It’s kind of like those nesting dolls. We’re to be about creating holograms in our personal lives, our communities, our nations and globally.

And We Nuns on the Bus saw those holograms of integral ecology all along our route.

I’ve learned a lot from Pope Francis and the people we met about what this entails:

Step up and embrace your role in serving the common good
Remember the dignity of each person, focus particularly on those who have been excluded. Include the personal touch
Listen to the stories of others’ experiences; enter into dialogue
Strengthen the connection to Earth to create sustainable systems
Be aware of the structural dimension and work for justice
Create community as you go
Widen your circles, become more inclusive, look for the interconnection
Create concrete, practical, immediate and effective ways to preserve the environment and put an end to social and economic exclusion
Adapt as you learn
Ground yourself in your spiritual center

[Jan Cebula, OSF, is liaison to women religious in the United States for Global Sisters Report. She joined the Nuns on the Bus Sept. 16 and rode with them all the way to the end of the tour in Washington, D.C.]

Of echoes and holograms, Pope Francis' words and what Nuns on the Bus heard on the road