by Jan Cebula
Social Justice
This article appears in the Nuns on the Bus feature series. View the full series. 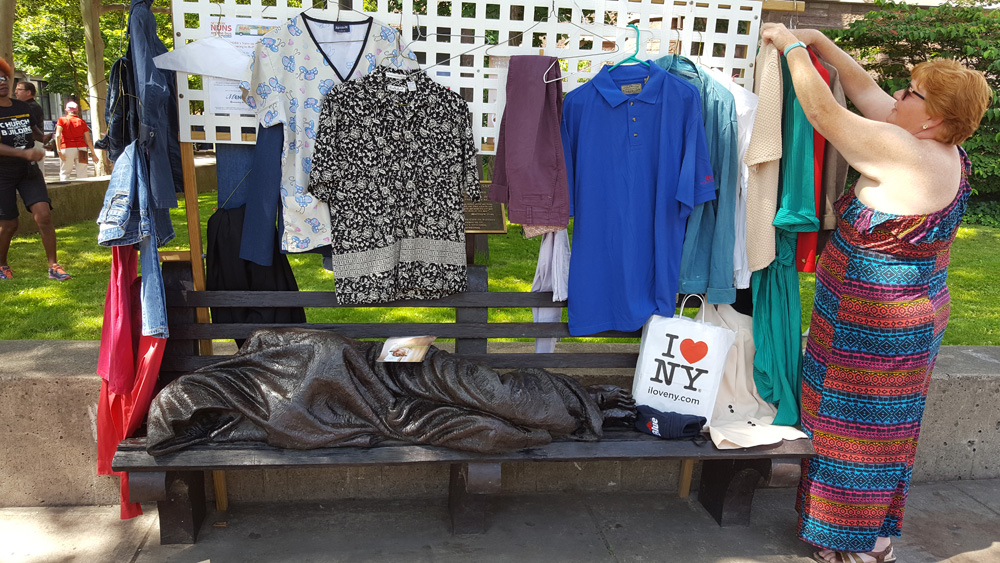 The "Homeless Jesus" statue outside of St. Paul's Episcopal Cathedral in Buffalo, New York. The clothes were being given away for free. (GSR photo / Jan Cebula)

Rochester, N.Y. — Global Sisters Report brings you special coverage during NETWORK's 2016 Nuns on the Bus tour, which started July 11 in Wisconsin, runs through the Republican National Convention in Cleveland, Ohio, and concludes July 29 at the Democratic National Convention in Philadelphia. See more photos day by day, News from the Road blogs and videos from NETWORK Lobby, the sponsor of Nuns on the Bus.

"So we, though many, are one body in Christ and individually parts of one another."
— Romans 12:3-8

So began day nine of this year's Nuns on the Bus tour, "Mending the Gaps: Reweaving the Fabric of Society."

As we prayed with this Scripture at the start of the day Wednesday, we could not foresee how immersed we would be in the experience of being one body, how it would unfold all around us, embrace us and touch us so deeply.

Each night, we reflect on the day's experience. Tuesday evening, we had talked about how some people are invisible to others, particularly people of color and those who have been marginalized by society. Perhaps the key to reweaving the fabric is connecting people, particularly with people who are the most impacted, we speculated.

On our schedule was a stop at the "Homeless Jesus" statue outside of St. Paul's Episcopal Cathedral in downtown Buffalo. Hmm, I thought. I had seen photos of it, but why stop here? But by the time we stepped back on the bus, how grateful we would be for the Rev. Will Mebane's persistent invitation!

Buffalo is experiencing a type of rebirth with lots of redevelopment, but not everyone is benefiting, the Rev. Will told us. So he set about reconnecting the church with the homeless and others left out, left behind. It began simply by seeing and paying attention to those members of the body of Christ. And it was apparent that the seeing and connecting keeps deepening, unfolding and expanding.

The Rev. Will invited us into a conversation with representatives of Concerned Clergy Coalition of Western New York; Gamaliel of Western New York, a coalition of 85 congregations, labor unions and other organizations; the Coalition for Economic Justice; Catholic Charities; and Friends of Night People. Congressman Brian Higgins also joined in.

They spoke of the abject poverty in the area — over 40 percent — and their efforts toward racial and economic justice.

"We are willing to lock arms with anyone and everyone," the Rev. Will explained.

With tears at times, they told stories about how their relationships with "the least" had been transformative. 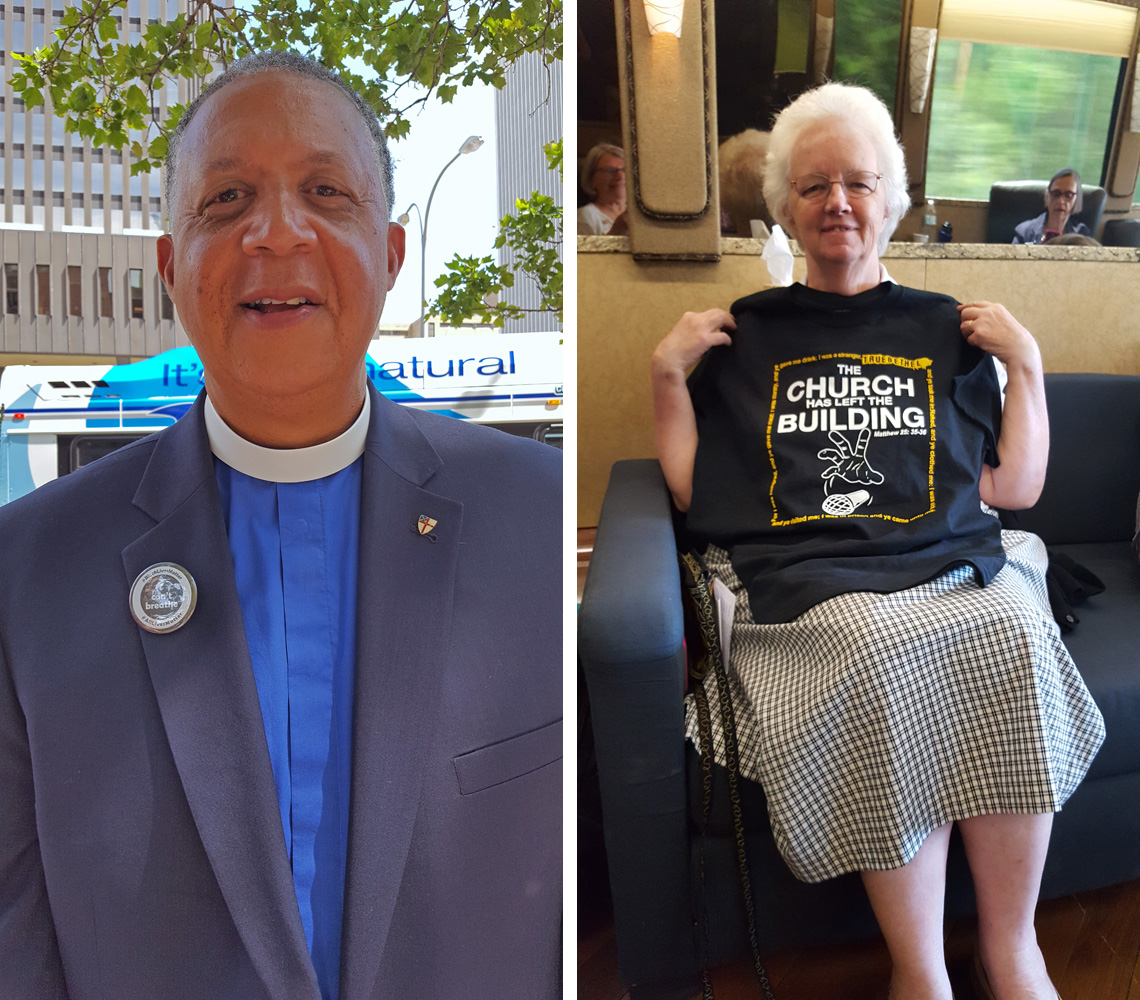 Details of what they said and even the words they spoke elude me now, but their passion and energy remain. So do the lessons they taught about being members of the body of Christ and about reweaving the fabric of society. It is about wholeness, of individuals and the entire body. Of reconnecting people, the personal with the systemic. Of seeing the whole and recognizing the connection to damaging policies and working to change them. Of ever-expanding and inclusive relationships. Of being deliberate and intentional, grounded in deep faith and acting with courage.

We emerged from the conversation to the space outside the cathedral for a short public program, and a diverse crowd and buzz of activity greeted us. When I spotted a T-shirt that read, "The church has left the building," I thought, How true about what's happening here, about Nuns on the Bus. We hadn't yet seen the "Homeless Jesus" statue a short distance away.

Then I saw it. Jesus sleeping on a bench, wounds in his feet exposed. Everything we had just heard and felt, depicted here. Calling us all to wholeness. Impelling us to go on.

Deeply moved, we boarded the bus and headed to Rochester to be surprised by another body of Christ experience.

It was clear that the focus is the health and wholeness of both those who are served and those who work there. Over time, they have developed an integrated system: full primary care, specialties such as cardiology and oncology, mental health services, dental care, X-rays and labs, all under one roof. There are even rooms with chiropractic, massage and physical therapy services. The 18 staff members and over 250 volunteers love working there; unconfined by time restraints, they are allowed to practice medicine in the way they were trained to and want to. Care is customized to the individual.

The broader issues of health care policy issues and structural racism are also being addressed, witnessing to the wholeness.

We're riding the bus connecting what's happening in local areas all across the country to advocate for just federal policies.

As we left St. Joseph's Neighborhood Center, I noticed a sign on the wall that read, "I pin my hopes to quiet processes and small circles, in which vital and transforming events take place" (Rufus Jones). 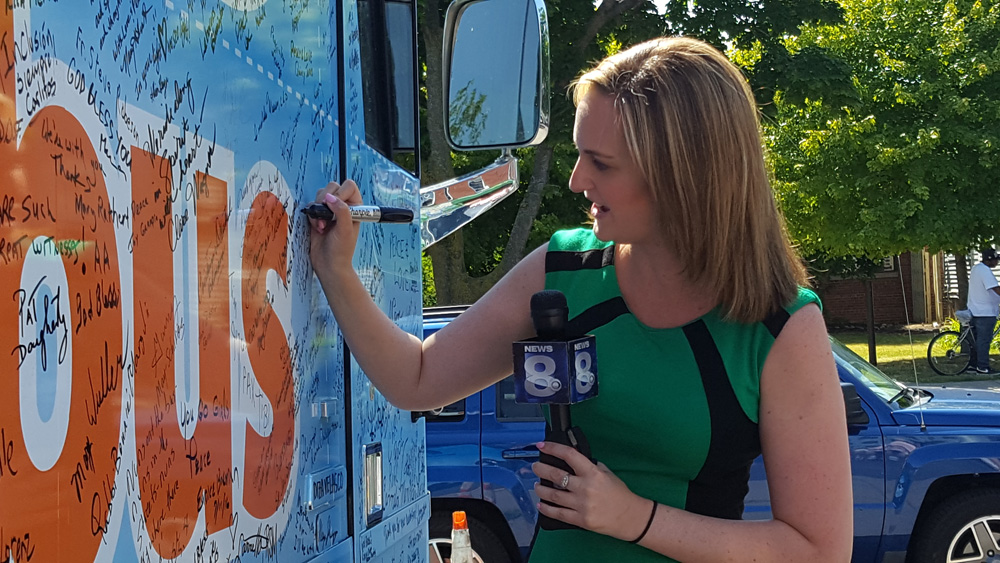 A good reminder of day nine: living as a member of the body of Christ, reconnecting and mending the gaps, reweaving the fabric of society, and creating wholeness.

Social Justice | Nuns on the Bus 2016: Tending the body of Christ, reweaving the fabric of society