By Sr. Quincy Howard of the Sinsinawa Dominicans

In the evening, we arrived at Mount Mercy University in Cedar Rapids and were warmly welcomed by the Mercy Sisters there. After collecting our bags, winding through the empty college library (students are away for fall break), shuffling through an emergency door and setting off the alarm, we found our rooms and grabbed a quick bite to eat with the resident sisters.

We gathered at the beautiful chapel for our Town Hall for Justice, and I was thrilled to be greeted by three of my own Dominican sisters who had traveled from the Dubuque area to attend.

The second cohort of Nuns on the Bus sisters for the trip had the chance to participate their debut town hall event for a crowd of about 75 people. After our characters — Eddie, Nikki, Diana, Adelaide, Jonathan, George and the Corporation — demonstrated how economic inequality has been amplified by our nation's tax policies since the 1980s, Sr. Simone Campbell opened it up for conversation. There was lots of engagement in the small discussion groups, but when she began asking folks to share, the crowd was more subdued. Nuns on the Bus has definitely arrived in the Midwest!

With a little cajoling, some wonderful ideas emerged about how to encourage friends and neighbors to vote. Those who shared helped us understand just how important it is for Iowans to elect representatives who will reverse some of the federal (and state!) laws that have already harmed so many residents.

It was a hard crowd to read, but before they left, my Dominican sisters assured me, "We may be a quiet bunch, but know that we're soaking it in."

As we pulled up for the morning rally outside Rep. Rod Blum's office, we were greeted by a cardboard life-size cutout of Representative Blum, who represents Iowa's 1st District. After repeated requests for appointments to speak with him or for him to hold town hall meetings to no avail, his constituents began bringing this cutout to their gatherings.

Sr. Robbie Pentecost, an Oldenburg, Indiana, Franciscan Sister who ministers in Appalachia, greeted the crowd and told them we're on the road working for tax justice for the common good. Then, Cedar Rapids resident and former Network executive director Mercy Sr. Kathy Thornton spoke. Sister Kathy is also a former Nun on the Bus. She emphasized the hardships and struggle of people in Iowa, particularly obtaining adequate mental health services, affordable health care and other vital services. Having requested an appointment for Nuns on the Bus (more than once) to meet with Representative Blum or his staff without a response, she wondered aloud how he can represent Iowans without meeting or talking with them. How does he know of their struggles and concerns?

That is a growing frustration of people we've met along the way.

"They won't talk to their employers," their constituents, as one woman lamented at last night's town hall.

Recognizing her privileged position as a white woman with a master's degree and a processional job with good health insurance, Nadia Gillitzer told us how she has to stretch her insulin and supplies from paycheck to paycheck. With insurance, her medication costs $200 every month. Without, it would be $1,000.

"Just to keep me alive," she noted.

After the rally, Sister Simone, Sister Kathy, Nadia and several others of us from the bus went to the congressman's office. Five or six constituents spontaneously accompanied us. After buzzing in, an aide came to the door and let us in. The communications director joined her. We were not invited to come in to the office area and sit down.

Sister Simone delivered a packet of information about how Iowans are being affected by the tax legislation that rewards the wealthy while making it harder on people in the lower-quintile economic brackets. Sister Kathy made it clear she never received a response to her requests for an appointment. The constituents were clearly frustrated by repeated attempts to get meaningful responses to their questions from their representative and let it be known.

As we roll on, Sister Kathy's question echoes in my mind: How do elected officials represent their people when they isolate themselves from them, particularly from those impacted the most by policies they enact? 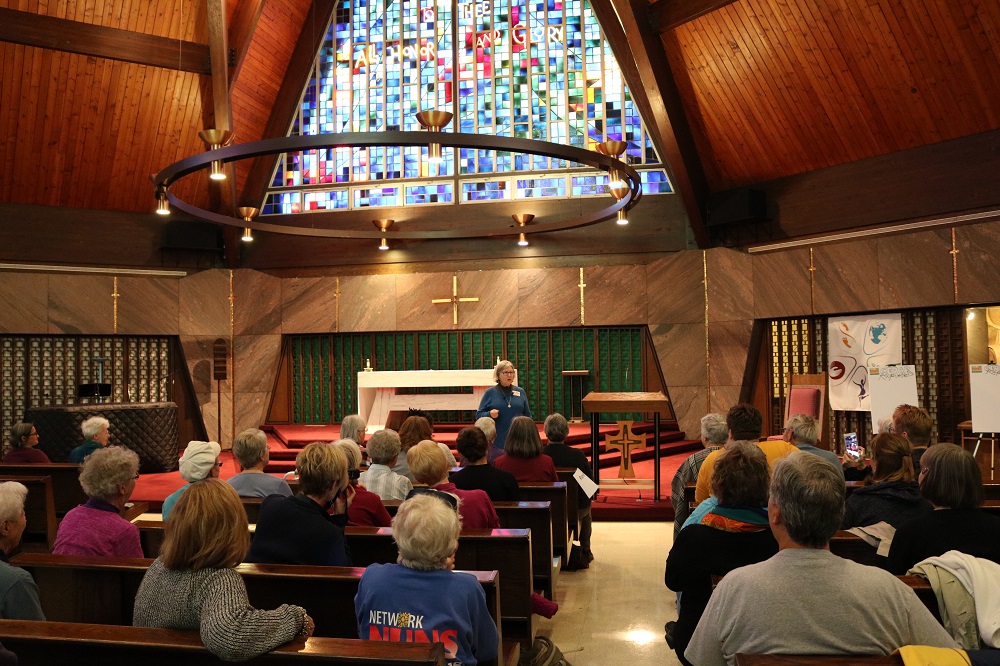 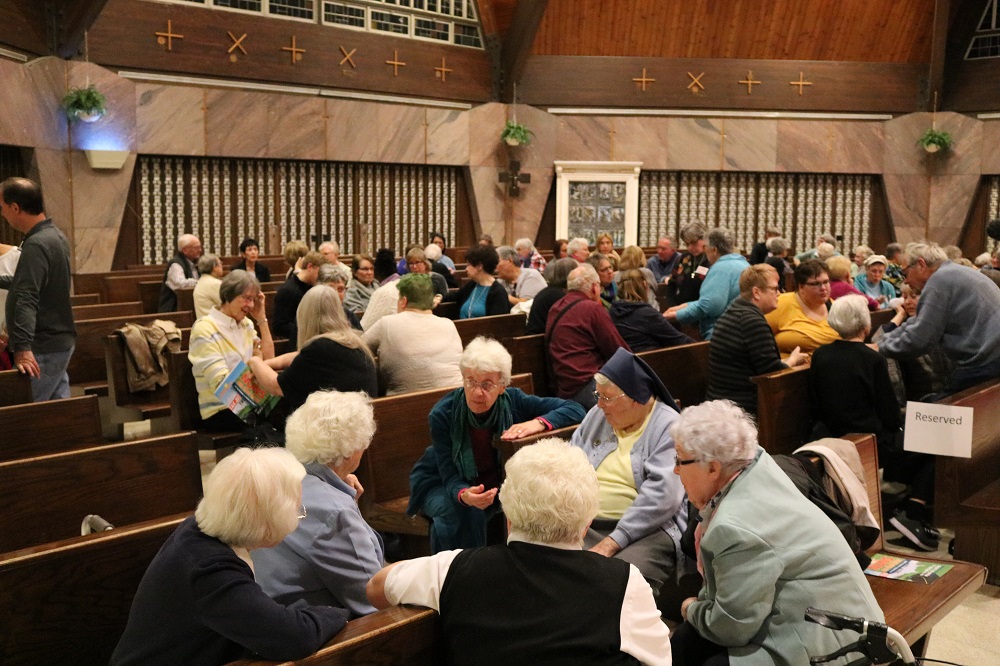 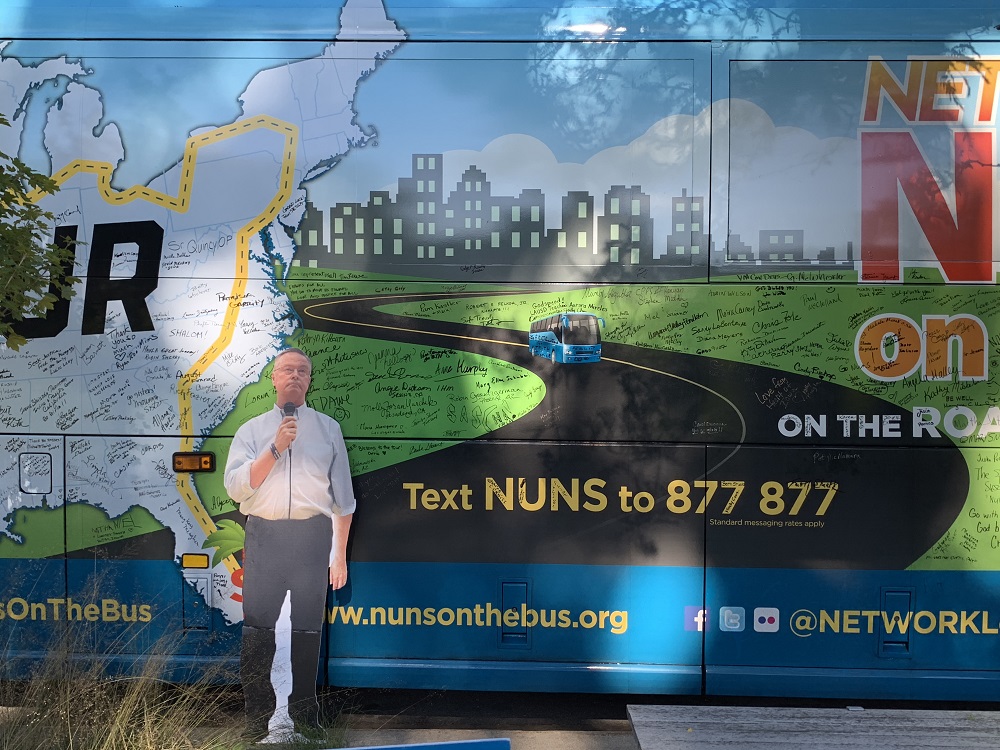 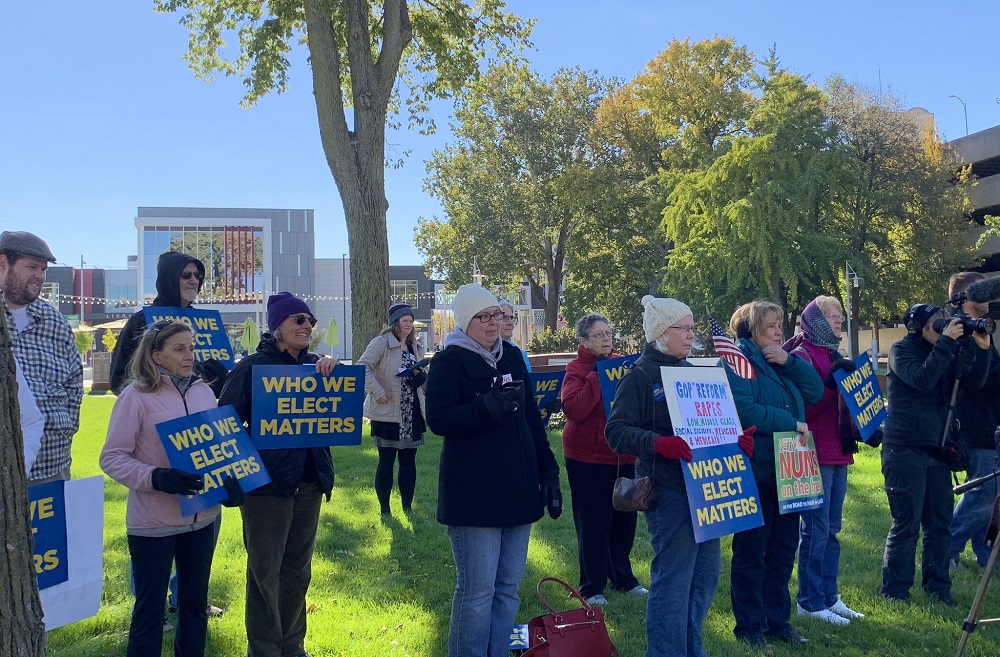