The magnetic force of hope 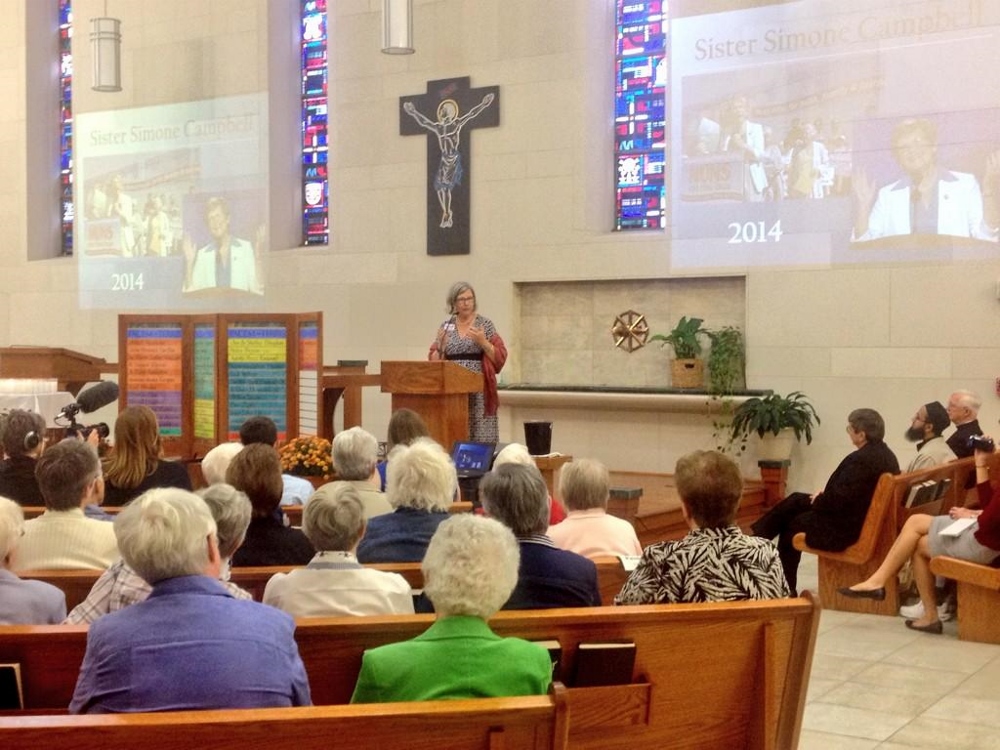 Sr. Simone Campbell spoke to the crowd gathered Sept. 21 at St. Ambrose Church in Davenport, Iowa, for the 2014 Pacem in Terris award ceremony. (Courtesy of NETWORK)

Davenport, Iowa — It was a beautiful sunny Sunday afternoon and people were a buzz, pledging to vote and signing the bus which was parked right in front of the doors to the chapel of St. Ambrose University in Davenport, Iowa. But they weren’t coming just for that. They were streaming in for the presentation of the 2014 Pacem in Terris Award. To our very own Sr. Simone Campbell. What a fitting way to conclude Day Five and the Iowa leg of Nuns on the Bus!

The award was created in 1964 to commemorate Pope John XXIII’s encyclical letter, Pacem in Terris (Peace on Earth), which called on all people to secure peace among all nations. One might think, “Oh, no big deal; it’s only Davenport, Iowa,” until one hears the list of previous recipients, all of whom had appeared in person to accept the award: Martin Luther King, Jr., Dorothy Day, Saul Alinsky, Dom Helder Camara, Mother Teresa, Helen Caldicott, Archbishop Desmond Tutu, Sr. Helen Prejan,  and Lech Walesa, just to name a few.

During the ceremony, I was quite moved as the names of the prior recipients were called and a candle  lit in each one’s honor. And moved knowing Simone was about to join them. For her remarkable ministry, her courage, her passion for justice and peace. For taking risks. For leading. For following the call of the Spirit. And, in the words of the award, for being “a spark of light, a center of love, a vivifying leaven.”

Sitting there I felt so grateful to be a woman religious; so privileged to be part of Nuns on the Bus, this movement.

Taking the stage following the presentation of the award by Bishop Martin Amos, Simone quipped, “The Holy Spirit has a very large sense of humor that a Californian troublemaker could get included” in the list. Clearly deeply touched and humbled, she continued, “What I know is that it’s not about us individually but it’s about us together. Isn’t that what peace is about? Where there is room for everyone at the table.”

Combining her sense of humor with an openness of sharing her own spiritual journey, along with reflections on Pope Francis’s Joy of the Gospel, Simone touched and inspired the crowd with her wisdom. Peacemaking is about the radical acceptance of everyone, she said. And about fighting. Not fighting against. But for an alternative future, for peace.

“It's not about pushing back against this force that I want to eliminate.” That just reinforces it and “you get stuck pushing on both sides. There’s no peace in that.” It’s about standing side by side, looking toward the future and fighting for an alternative vision where everyone is invited in. “Fighting for means we all need to aspire to the something else. It’s fighting for a vision of who we see ourselves called to be. It’s radical acceptance and fighting for the vision that makes for peace.” 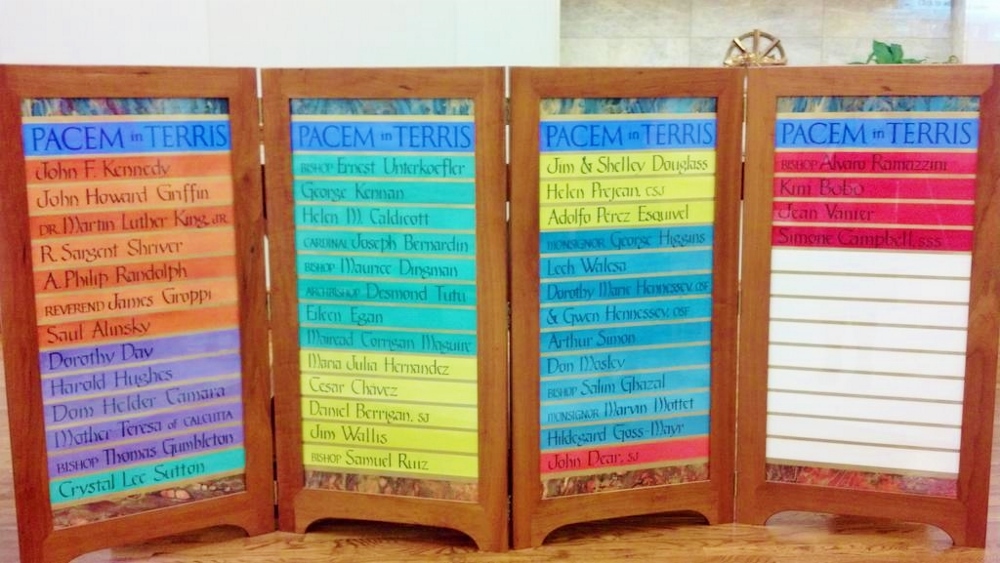 The list of recipients of the Pacem in Terris award include Cesar Chavez, Daniel Berrigan, John Dear and Helen M. Caldicott. (Courtesy of NETWORK)

All along the way, Nuns on the Bus have been hearing the concerns of people. Sharing the stories of two women she has met, Simone called stories “the root of peacebuilding. [They] break hearts. If our hearts are broken open, we have room for everyone’s story.”

Stating clearly that her faith is what “fuels” her, Simone shared that “the Spirit of God and the story of Jesus keeps me nourished for every step of the way. I’ve learned that it’s all about letting us be moved by the Spirit of God and in that movement, peace is built.”

Giving credit to the work of the Holy Spirit for initiating Nuns on the Bus, she reflected on how it began in 2012 following the mention of NETWORK in the Doctrinal Assessment of the Leadership Conference of Women Religious by the Vatican Congregation for the Doctrine of the Faith. “In my view it was the work of the Holy Spirit that used a moment of struggle, of pain, of sadness – when it would very tempting to fight against – to fight for an alternative vision. For me, it is the Spirit of God alive among us that used this painful moment of notoriety, as a gift, as a treasured gift.” Because of this, people across the nation are now talking about poverty, about immigration and about getting out the vote, about the 100%.

Reflecting on the experience of Nuns on the Bus, Simone spoke about the hunger for hope.

“The amazing thing about the bus trip is that for some miracle reason I do not understand, it’s become a magnet for people to come to sign, to commit themselves to making a difference, to speaking out and knowing we’re in this together. Because hope is a communal virtue. Hope is that virtue that makes peace possible. Hope says there is this alternative to conflict and another way forward. Hope is what keeps us going.”

Incredibly energized and inspired, I left the chapel grateful for the amazing experience of being swept up in this magnetic force of hope.

To view a video of the Pacem in Terris Award ceremony click here. Sr. Simone Campbell’s remarks begin at about 26:20. Bishop Martin Amos presents the award at about 24:20.

Follow NETWORK's News from the Road, blogs by sisters riding along as Nuns on the Bus in each state, here. That page also has a tab to the full tour schedule (Bus Events), so you can see when they will be in your neighborhood.

The magnetic force of hope