The multiplication of energies 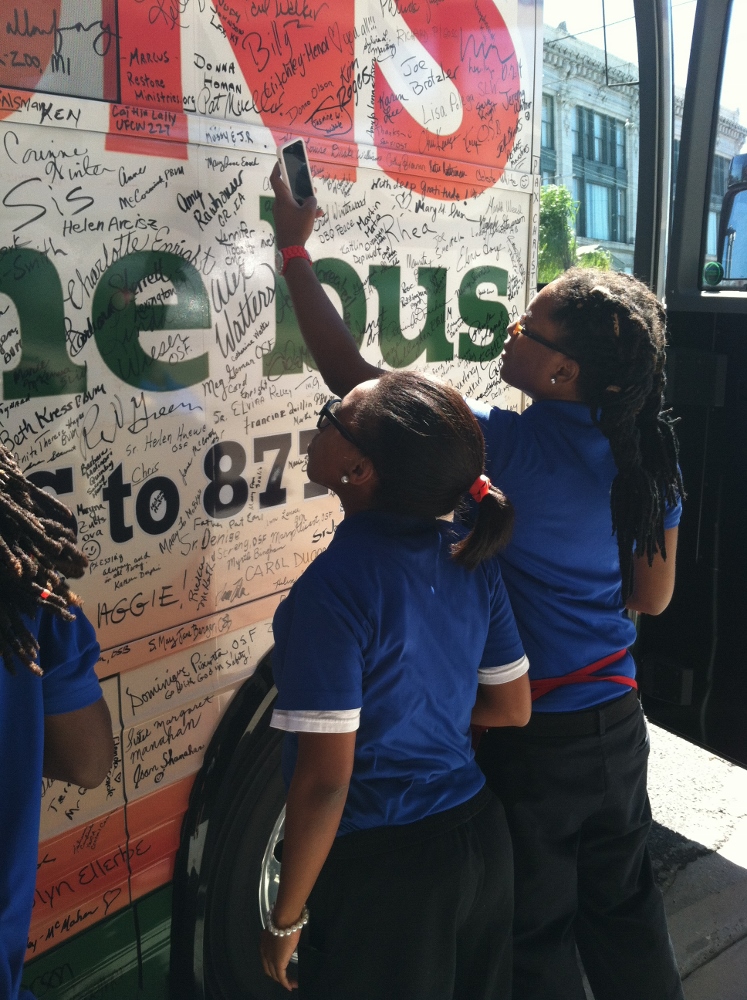 Two young women sign the Nuns on the Bus bus in New Orleans and photograph their signatures for social media. (Courtesy of NETWORK)

Update: Nuns on the Bus announces extension of tour through election day. The new schedule, with engagements in Illinois, Iowa and Wisconsin is here.

As the “We the People, We the Voters” tour of Nuns on the Bus wraps up, one aspect of my experience riding on the bus still intrigues me.  From the very first day, what mystified me was the amount of energy we were feeling. “One huge swoosh of energy” was what I wrote at the end of that first day. One time, one day, I could understand. But every day and at every stop? I just kept wondering about it: Why was it happening; what was generating it? What was the meaning of it?

The energy was palpable. I know the other Iowa sisters felt it. Our schedule was intense, and one sister commented that she was so exhausted she didn’t know if she could keep it up. That is, until she stepped off the bus and among the people. That’s how exhilarating it was.

I’ve been keeping up with the rest of the Nuns on the Bus journey by reading the blogs. Those who hopped on the bus after us were having similar experiences. “Enthusiastic, excited, animated, energetic, eager, exhilarating, inspired, lively, uplifting, passionate, spirited, rousing, electric, and exuberant” were some of the words the sisters used to capture the experience. “Hope” appears often, perhaps more than any other.

We were all touching into something clearly much larger than ourselves, something beyond us.

I’ve been bringing this to prayer, reflecting on it. The story of the loaves and fishes surfaced.

Faced with a vast hungry crowd in a deserted place, the disciples suggested to Jesus that he dismiss them so the people could go get something to eat. He responded, “Give them something to eat yourselves.” They had so little for so many. Nothing but five loaves and a couple of fish.

The people we met are hungry. For a vision of a different future where people aren’t left out or behind. For a society and a church where all are welcomed around the table. For a country based on our ideals of justice, equality and freedom. For lives lived in harmony with one another and Earth. They want to know they are not alone in thinking this vision is possible, in working to bring it about. In this time of great polarity, they hunger for community. Our hungers, too.

At our Town Meetings for the 100%, we asked those gathered a few questions to get things started, such as recalling the first time they voted, who influenced them to vote. The room buzzed. But when we asked, “What gives you hope?” there was a silent pause. Yes, the people are hungry for hope.

We Nuns on the Bus were so few among the crowds. We had so little to offer in the face of such hunger. About five loaves and a couple of fish, it seemed. And probably those who gathered felt the same way about what they had to give. But as we stepped off the bus and joined them we knew that somehow our little bit and theirs had been blessed and broken.

We experienced the multiplication of energies!

And there were even 12 baskets left over. Yep, plenty of hope to keep distributing.

[Jan Cebula, OSF, is U.S. liaison for Global Sisters Report. She rode with Nuns on the Bus during its first state tour, through Iowa, in September.]

The multiplication of energies