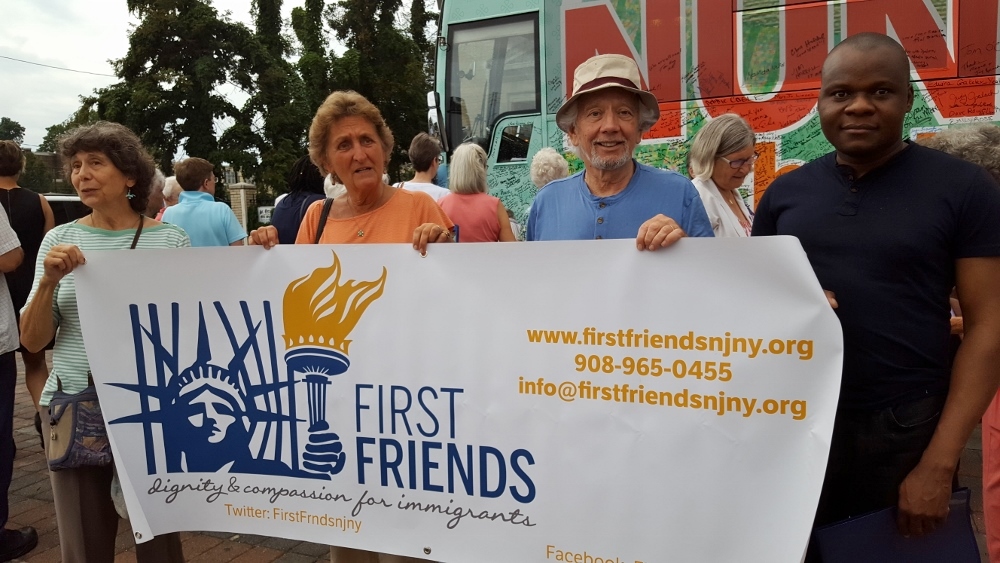 Newark, New Jersey — Global Sisters Report brings you special coverage during NETWORK's 2016 Nuns on the Bus tour, which started July 11 in Wisconsin, runs through the Republican National Convention in Cleveland, Ohio, and concludes July 29 at the Democratic National Convention in Philadelphia. See more photos day by day, News from the Road blogs and videos from NETWORK Lobby, the sponsor of Nuns on the Bus.

We were talking with Josh, Heather, Cathy, Curtis and Janee with Moral Monday Connecticut on Day 13 about their efforts to do something about poverty and racism on the local level in Hartford, Connecticut. After many years of talking without resulting legislative changes and in the face of racial incidents nationally, they realized that something different had to happen. That's when United Church of Christ Bishop John Selders, who had been present in Ferguson, Missouri, offered this insight:

"We're not going to talk our way out of racism" and income inequality.

They decided to become pro-active and step things up. After engaging in nonviolent disobedience skills training, twice they occupied major intersections in West Hartford to call attention to income inequality. They also stood up and spoke out during a Connecticut forum on racism, setting the conversation on another course.

They acted by "occupying spaces" to call attention to racism and income inequality and to shift the conversation. And by doing so, they were "creating spaces within which transformation can take place," Josh explained. 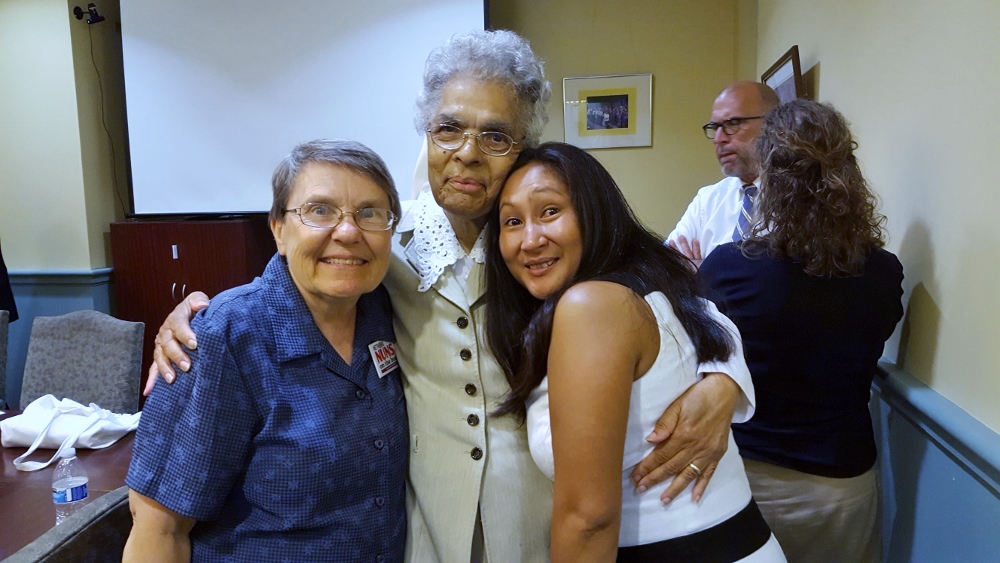 The insight of Bishop Selders is echoing in my mind and heart. We need to do things differently, to act to shift the conversation in our local communities, in our nation. We even need to ask ourselves, "Who's controlling the conversations?" How can we be about intentionally creating spaces for transformation wherever we are so that all can live healthy, dignified lives? Sometimes that's going to mean disrupting the usual way things go.

On Day 14 (July 25), we witnessed just such a space created for transformation at Integrity House in Newark, the largest comprehensive addiction treatment facility and program in New Jersey. Robert Budsock, CEO, introduced us to the staff and clients, or members of the family as he likes to call them. They have an educational program, outpatient treatment and prevention programs. The most transformative is their therapeutic residential community: the love and care for each other was evident. Indeed, it is a family. Over 50 percent of the staff had themselves been participants in Integrity House. As one after another told their story of addiction, recovery and future goals, the healing power of relationships shone in their faces and was broadcast in their voices. How important community is! Each radiated a healthy, confident presence. How could we Nuns on the Bus not be touched, changed?

Connections to federal policy became central to our conversation: the need for funding for treatment, especially for residential therapeutic programs under Medicaid. When people are ready to enter treatment, immediate access to services is critical to recovery.

At all our rallies, including the most recent in Scranton, Pennsylvania, and Newark, we've heard testimony from low-income workers and immigrants. At each site visit we've met people impacted by policies: We've heard and seen the effect of these policies.

As Nuns on the Bus travels from place to place, we are amazed at the enthusiasm of those who greet us. What is it about the bus that generates so much energy, we ask ourselves. Last year I described it as The Multiplication of Energies.

Is the bus a visible vehicle of hope, of our desire for change, for a future when all are one? 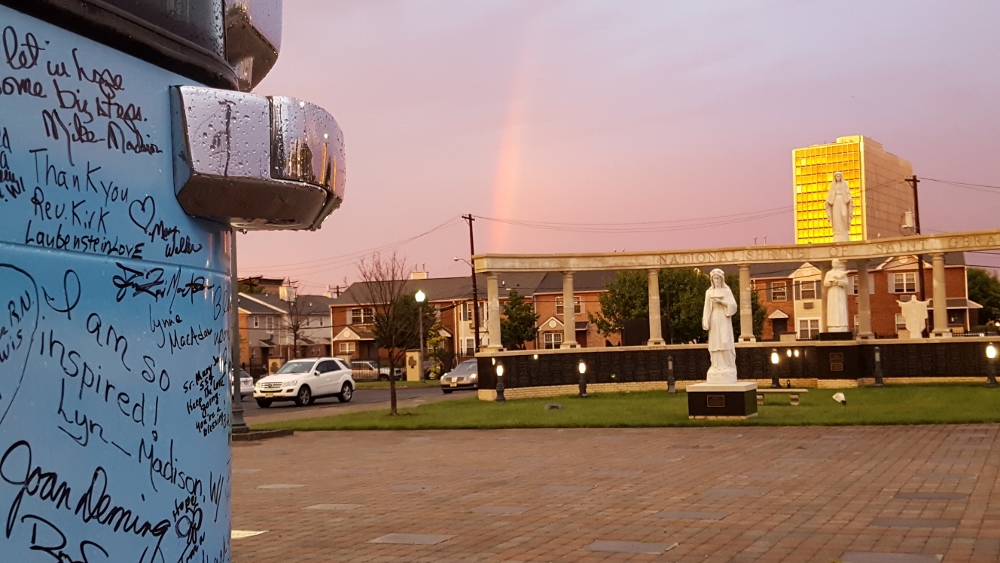 The July 25 rally scheduled to be at Military Park in Newark, New Jersey, had to be moved inside because of rain, but attendees emerged from the rally to find a rainbow. (GSR photo / Jan Cebula)

Each morning before we get on the bus, we gather in prayer. The Scripture reading for Day 14 was incredibly appropriate and captured what we have been experiencing:

We hold this treasure in earthen vessels,
that the surpassing power may be of God and not from us.
-2 Cor. 4:7

We also wonder what happens once we leave the places we have visited. Through the rallies, site visits and caucuses, have we shifted any conversations? Have we inserted ourselves to call attention to the impact of policies? Are we helping gather a community to work for change?

And now, I'm beginning to wonder, are we a rolling space for transformation? 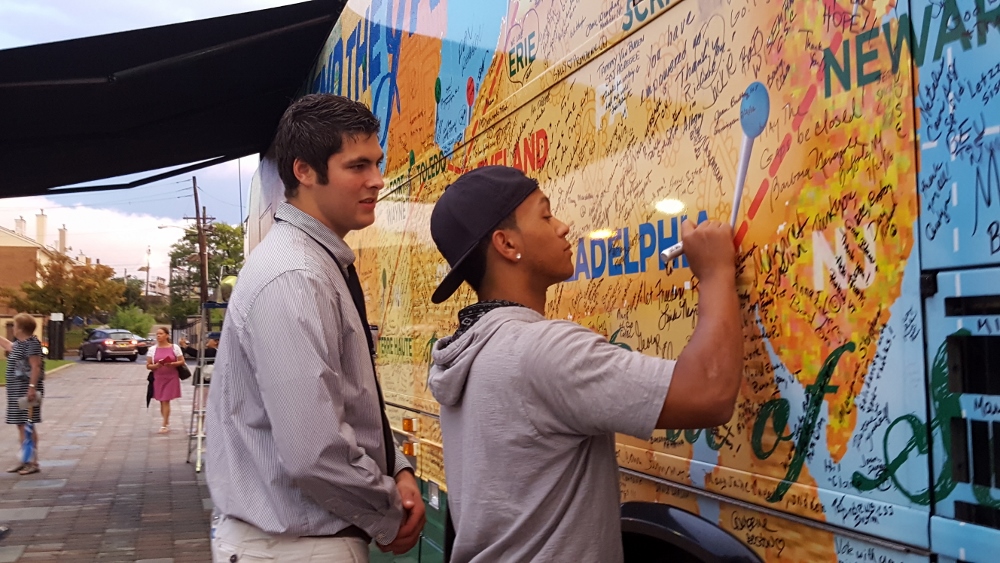