Nuns on the Bus 2016: Witnessing history in the making 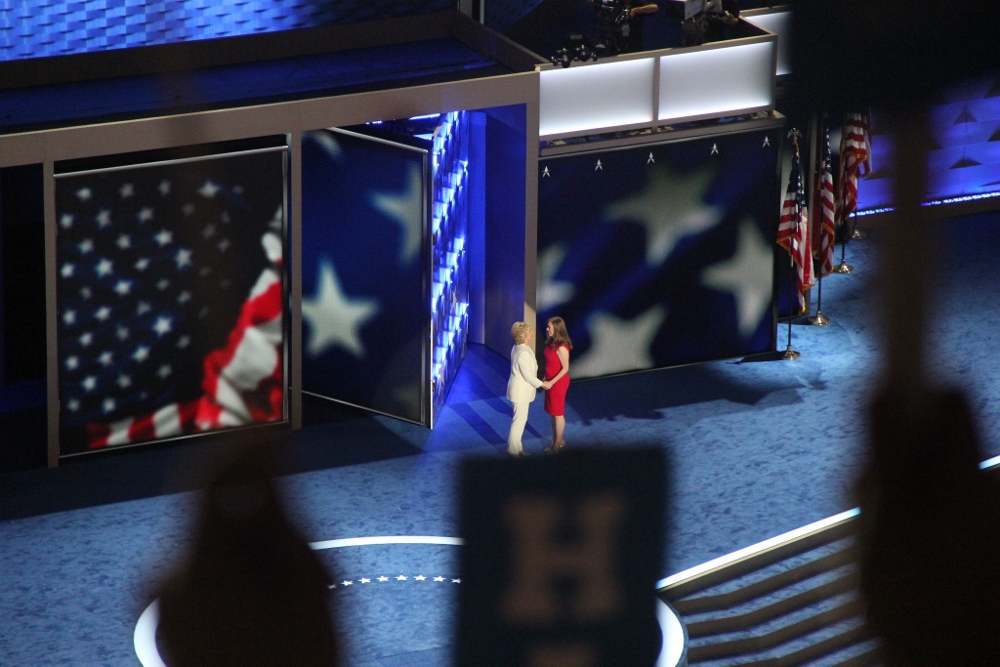 Philadelphia, Pennsylvania — Global Sisters Report has been bringing you special coverage during NETWORK's 2016 Nuns on the Bus tour, which started July 11 in Wisconsin, runs through the Republican National Convention in Cleveland, Ohio, and concluded July 29 at the Democratic National Convention in Philadelphia. See more photos day by day, News from the Road blogs and videos from NETWORK Lobby, the sponsor of Nuns on the Bus.

I climbed to the topmost row and carefully made my way to the seat that a young man graciously gave up for me. It was the last night of Nuns on the Bus, and we were able to get some passes to the Democratic National Convention. I had been there two nights before to see the first woman nominated by a major political party for president of the United States and I was now about to witness Hillary Clinton accept the nomination.

It had been a dizzying schedule and just making our way into the arena to find seats was a challenge. I was settling in, talking with a few young women around me about Nuns on the Bus and our current trip when one of them said a friend of hers would like to meet me. "Of course" I said; Nuns on the Bus never pass up an opportunity to get out the message.

It turned out that the friend was a reporter who started asking me about what it was like to be there. I can't remember now much of what she asked, nor my answers except for one, as we were talking about being present when history is made. She may have asked if I had ever thought about being president when I was a child. When I said I was a bit older so it wasn't an aspiration when I was growing up, she asked what would have been the reaction if one of my classmates had said she wanted to be president. I responded, "Honestly, that possibility never even entered our minds."

And yet, here I was, more than five decades later, about to witness something we had never imagined happening become a real possibility.

It's about time, I thought! And I had to wonder why it had taken so long.

It has been quite a journey; the pathways paved by so many. Joyce Johnson Rouse's song "Standing on the shoulders of the ones who came before us" echoes in my mind and heart. I am so grateful for their courage and tenacity. 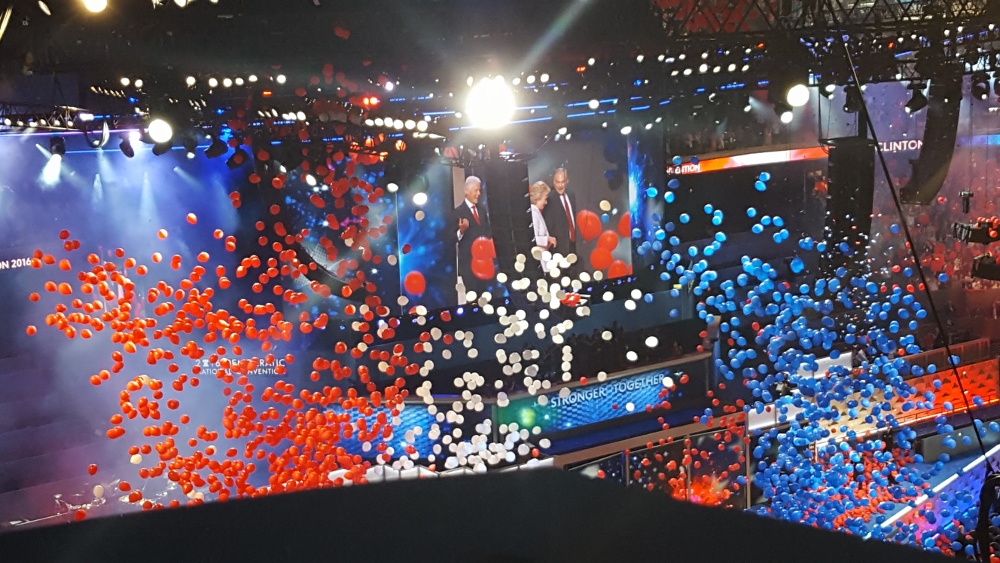 After accepting the nomination as the 2016 Democratic candidate for president of the United States at the convention's final day July 29, Hillary Clinton, in white, can be seen on screen with her husband, former President Bill Clinton, and her vice presidential pick, Tim Kaine. (GSR photo / Jan Cebula)

My maternal grandmother emigrated from Poland in 1912 when she was 16 and worked in a meat packing plant in St. Joseph, Missouri. Widowed at an early age with six young children, she remarried and moved to northwest Kansas to farm. I have no idea what her life was like in Poland or how much education she had. Or her challenges of being an immigrant. My mother was born in 1919, one year before women gained the right to vote in the United States. She did not finish high school, for economic reasons. Dreams deferred or never even formed? Possibly. Even if that were so, I am standing on their shoulders and am the beneficiary of their struggles and sacrifices.

What an incredible blessing to have lived during these last decades and all that has evolved! Alive through the awakening of our consciousness as women, claiming our own gifts and our ways of knowing and doing things. I remember it was even a struggle to try to overcome sexist language both in society and in the church. I read Beyond God the Father by Mary Daly, launching my ever-expanding quest for God. I recall attending many a meeting when I felt invisible and of experiencing that the only way we could move our agenda forward (no matter how noble) was to get a man in a position of influence to believe it was his idea. Feeling increasingly disoriented and out of it, it was so liberating to discover the underlying cause: We were living within a dominant male paradigm which denied our experiences as women. We had to work harder than men to be taken seriously and get a seat at the table.

We grew to honor our own skills and who we were as women. We learned from each other, bonded together and gave each other a hand. We became sisters of the struggle.

I also stand on the shoulders of the women religious who have gone before us, especially those who dedicated their lives to educating girls and women, who established the Catholic health care system and were pioneers in social service. I'm grateful for those who continue to empower girls and women around the globe, evident in so many stories we’ve published for Global Sisters Report.

Little-by-little, one-by-one opportunities have opened up, most of them hard fought. The younger generations have many more opportunities and have taken the lead in ways I could not have imagined. But they also have their own struggles to have a voice, to contribute, to be agents of change.

There was a special kind of excitement among the women and girls in the crowd on Thursday night (July 28). We all cheered when other path-makers appeared on the stage or the screen. There was an unspoken knowing among us, sisters of the struggle.

And there were many men, particularly those with daughters and granddaughters, also rejoicing, recognizing that "human rights are women's rights, and women's rights are human rights." (First Lady Hillary Clinton at 1995 U.N. Conference on Women in Beijing)

The work is not finished. The stories we Nuns on the Bus heard along the way attest to that. Women and children are bearing the burden of our current policies. We need a living wage, family friendly workplace policies, access to healthcare and tax justice to support our communities and our families. We need greater access to voting and citizenship for a healthy democracy. 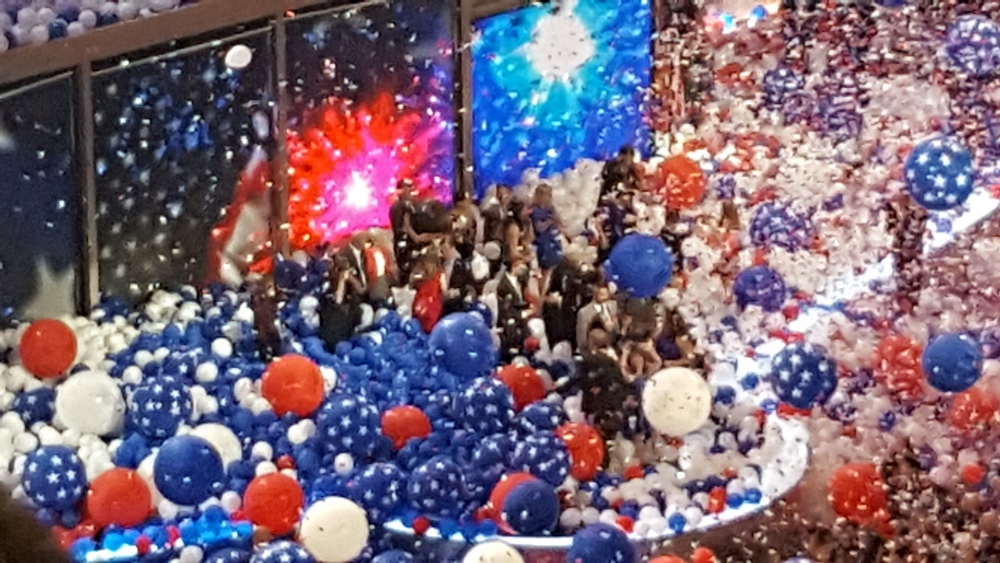 Excitement in the house: the celebratory balloon drop at the conclusion of the Democratic National Convention July 29. (GSR photo / Jan Cebula)

We need to continue the struggle for full participation of women in the church.

Yes, there are gaps to mend and still much to be done for and by women all over the world.

But on that night, it was time to celebrate and witness together history in the making.

Nuns on the Bus 2016: Witnessing history in the making