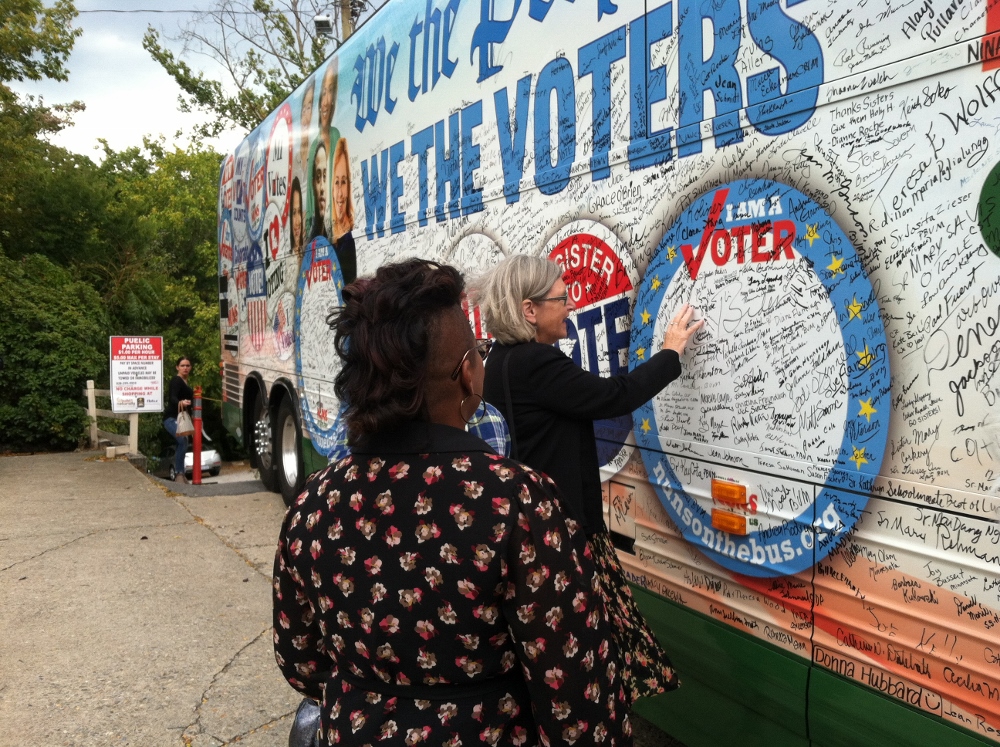 In Asheville, N.C., checking out the plethora of signatures on the bus. (Courtesy of NETWORK)

Asheville, North Carolina — Tuesday evening, after a Town Hall for the 100% at St. Peter's Catholic Church in Charlotte, N.C., the Nuns on the Bus went on a short break. They had spent four days in the state, which just had its restrictive voter registration laws ruled "OK" by the U.S. Supreme Court. The ruling on Wednesday overturns the Fourth Circuit Court's Oct. 1 reinstatement of same-day voter registration and out-of-precinct voting.

North Carolina's legislature passed the restrictive laws about a month after the nation's highest court struck down Section 4 of the 1965 Voting Rights Act (June 25, 2013, Shelby County v. Holder). That decision meant that states with histories of voting discrimination no longer had to get federal approval to tweak their voting laws.

Because the Supreme Court's October decision is an order to stay an injunction and not a full-blown decision on the merits of the law, the justices do not have to explain their reasoning. Justices Sonya Sotomayor and Ruth Bader Ginsberg, however, did dissent. The court recently overruled another appeals court decision to reinstate early voting and same-day registration laws in Ohio.

Early voting provides working people and others with difficult schedules the opportunity to cast their ballots. Voting reforms made in the past four decades were designed to encourage more people to vote, which is also the goal of Nuns on the Bus this year. The fact that voting laws are different in each state – including when the cut-off dates are for registering as a new voter or changing your address are before each election and what forms of ID are required – is an obstacle people can overcome with a little education, but why have obstacles at all?

Legislators who wrote and passed laws tightening up the rules in their states after the June 2013 change claim that their actions are designed to prevent voting fraud. However, very little fraud has been proven, and opponents of these restrictions say the efforts are aimed at keeping certain kinds of voters (Democrats, minorities, the elderly and the poor) away from the polls.

The U.S. Supreme Court ruled, in two separate measures, late on Thursday to block photo-ID requirements for voting in Texas and Wisconsin.

What is evident to me as I speak to our ‘dear neighbors’ in North Carolina, are both the hunger and hope they hold for a faith that does justice. Everyone I’ve met has offered profuse thanks for the opportunity to have this hunger fed through their participation in the Nuns on the Bus events. An elderly Baptist minister I spoke with shared his pain at the suffering he has seen in the Tar Heel State over his lifetime because of legislation that has severely affected people who are poor. He was almost weeping over this reality, but at the same time expressed such hope that with the message Nuns on the Bus is offering change can happen – God’s kingdom will come. And to this we say ‘Amen!’ 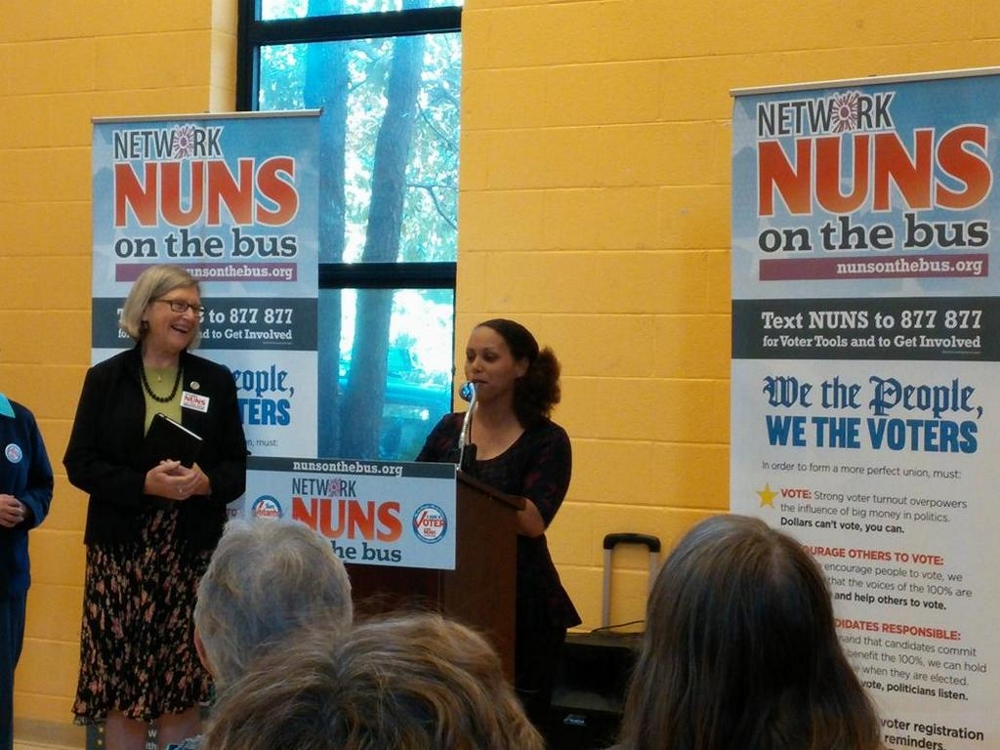 From Sr. Mary Beth Hamm: "Following a spirited Press Conference at the YWCA of Asheville, we 'walked the walk' of the message we have been proclaiming on the Nuns on the Bus tour and got out to encourage others to register to vote. (Courtesy of NETWORK) 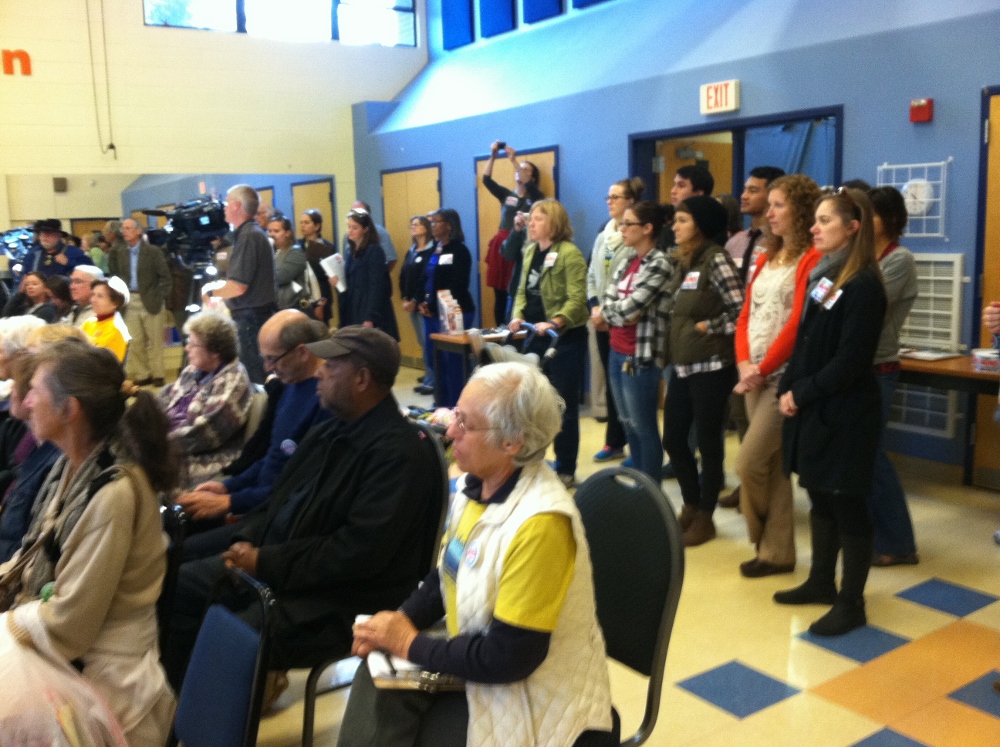 Read about the “very long day” Oct. 5 from Sr. Phyllis Teirney, SSJ, when the Bus went from Raleigh to Greenville to Asheville, making stops along the way to meet voters. She writes about concerns over North Carolina’s voting laws.

Catch up on the sisters’ News from the Road here, where there are a lot more reports, including about Asheville and  Charlotte.

They will be back in action on Tuesday in Baton Rouge, La., firing up voters and showing solidarity with We the People. See if they are coming to your neighborhood: Their schedule is here. 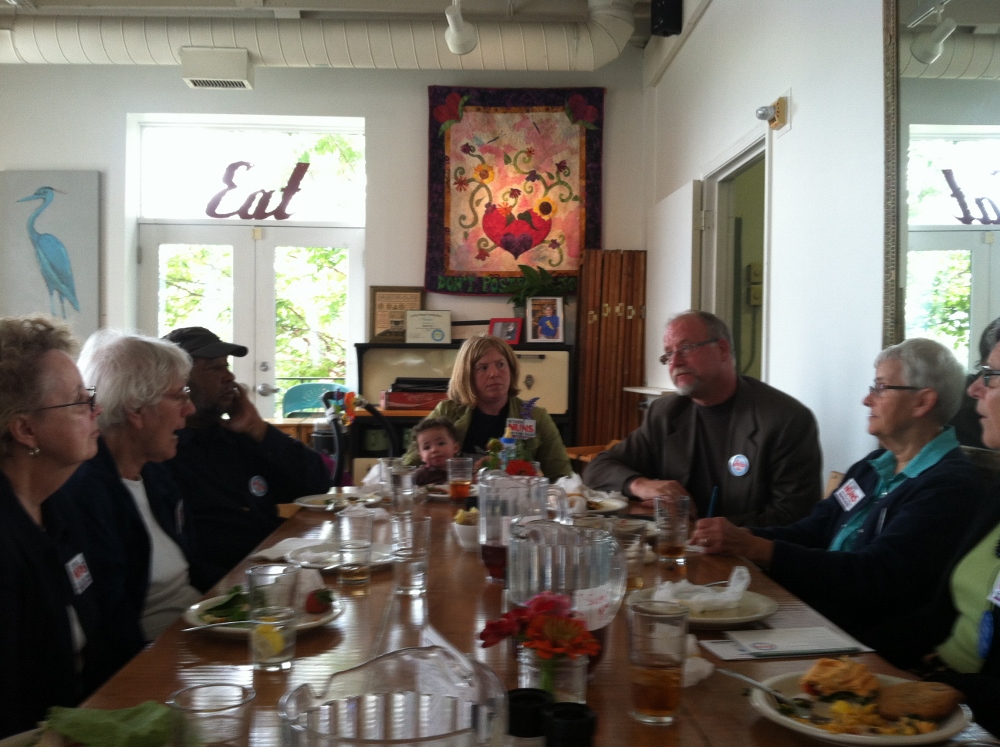 From Sr. Margie Housch, writing about the intentional lunch at Laurie's in Asheville: "We can’t buy presence. It can only be given away. It was multiplied at this meal and will be multiplied by all participants as they interact with others." (Courtesy of NETWORK) 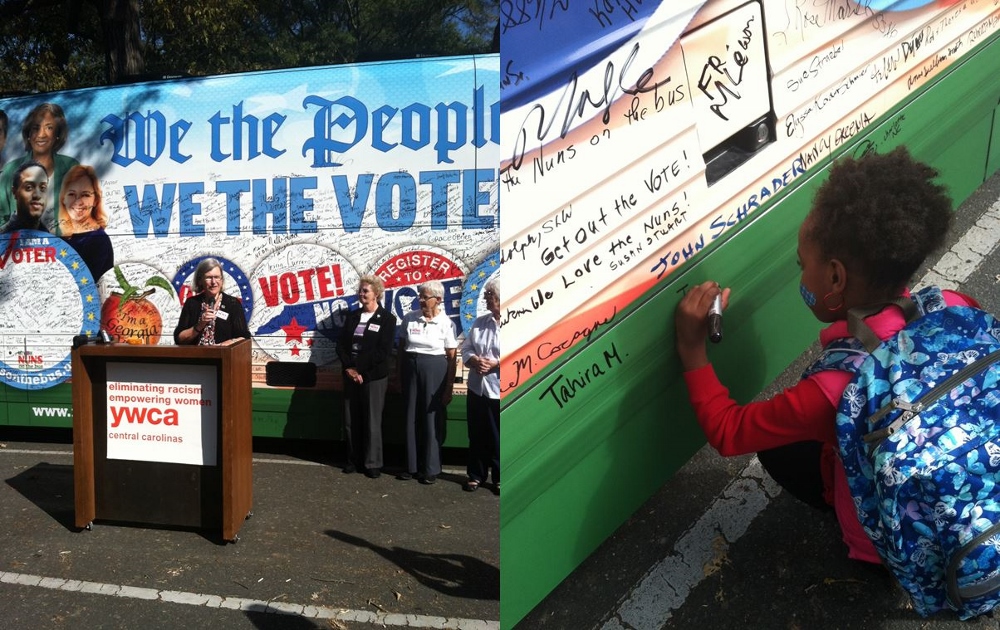 Left, Sr. Simone Campbell never runs out of steam. She delivers her speech to We the People, We the Voters again, outside of the YWCA Central Carolinas in Charlotte. Right, A someday-voter catches the enthusiasm and signs the bus when it was in Charlotte. (Courtesy of NETWORK)

Click here to catch up with all the Nuns on the Bus Blogs on GSR (or use the orange tag at the top of the article).

When will 'wounded justice' be resurrected?

Nuns on the Bus 2018: Caring for the least of these in the Carolinas