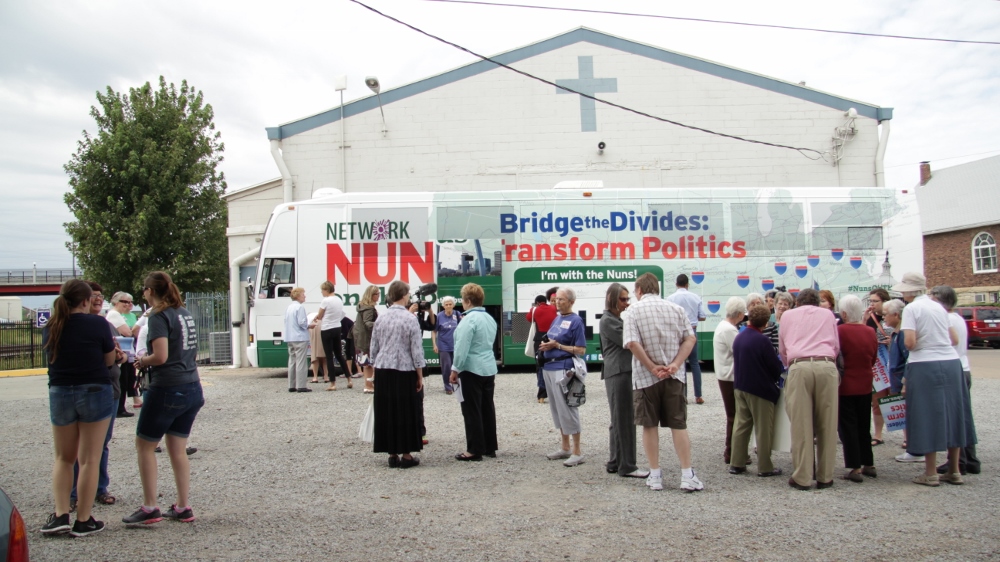 Nuns on the Bus made a stop at the Topeka Rescue Mission's distribution center. Sept. 12. (Photo courtesy of NETWORK)

Topeka, Kansas — Nuns on the Bus had a busy weekend.

Saturday, they traveled into Kansas to the state capital of Topeka. They were lucky enough (strategic, connected enough!) to meet up with Katherine Sebelius, the former U.S. Secretary of Health and Human Services whose term spanned the massive roll out of the Patient Protection and Affordable Health Care Act. Sebelius was sworn into that national post while she was serving as Kansas’ governor (April 2008), and a political shift that followed felt back home, when a Republican governor was elected November 2010.

Since then Kansas has remained among the 19 states that have opted out of expanding their Medicaid coverage under the ACA. This decision leaves a coverage gap for nearly 4 million Americans, according to the Kaiser Family Foundation, which studies health care in the United States. In Kansas, about 78,000 relatively low-income people are either without access to Medicaid or to the tax credits the ACA allows to help offset the cost of their buying private insurance.

The sisters also had an encounter with the infamous Westboro Baptist Church, whose members tend to picket anything from military funerals to concerts — really anything where a good-sized crowd might be expected — in order to advance their anti-gay agenda.

Read Sr. Judith Best’s blog from the News from the Road on Nuns on the Bus’ Tumblr page to see how Social Service Sr. Simone Campbell handled the situation. You probably won’t be surprised, but the results will give you hope.

By Sunday, Nuns on the Bus was already down in Fayetteville, Arkansas, participating in a Mass and then conducting a town hall at the First United Methodist Church later in the day.

The sisters on board the bus continue to add their impressions from the various town hall meetings and other events as they travel toward our nation’s capital. There are plenty more stories for you to read here on their News from the Road, including about their time in Little Rock today.

Global Sisters Report will bring you highlights and reminders to read about it. We’re looking forward to when our very own Sr. Jan Cebula joins them in just a couple of days.