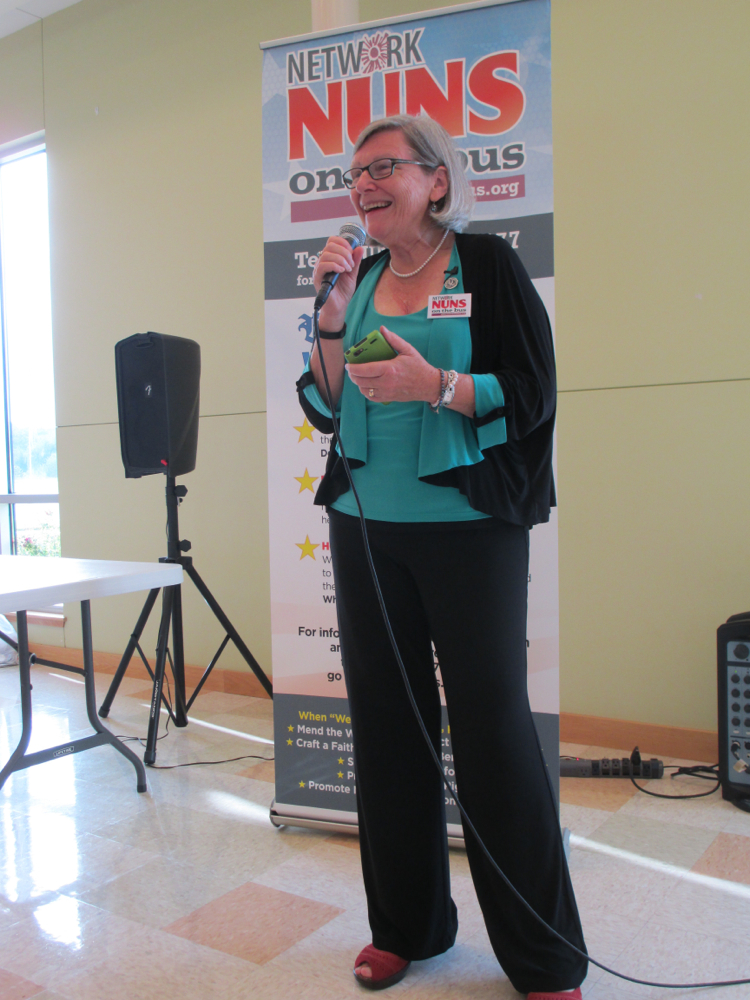 Sr. Simone Campbell talks to residents of Council Bluffs, Iowa, at a town hall meeting Sept. 18 during Day Two of the 2014 Nuns on the Bus tour. (Jan Cebula)

Sac City, Iowa — Editor's note: Follow the tour at NETWORK's site, where you can find an updated schedule of stops – Bus Events – as well as blogs From the Road by sisters, including photos.

As we travel along, seeing the corn and soy bean fields, farms, small towns, and larger ones rolling by, bumping along with the tires humming, I suppose it’s natural that road images start coming to mind.

Journeys take us to unexpected places. At times it’s smooth sailing. We hit rough spots. Sometimes the road narrows or takes a detour. We may even get lost. Surprises can turn into unexpected joy.

So it also is with the journey of democracy. Day Two for Nuns on the Bus was an experience of exploring this with our first two “Town Halls for the 100%.” In Council Bluffs we were welcomed by Interfaith Response at New Horizon Presbyterian Church and were hosted by the Sanford Community Center in Sioux City. We came to learn.

We encouraged the participants to tell each other their stories about the first time they voted, who influenced them to vote and how they felt about engaged in the civic process. A woman in my group said voting was just expected. Another spoke of growing up thinking she could make a difference. A smooth road.

People at both locations were asked, “What are your concerns about our country and where it’s heading . . . the road we’re on?” 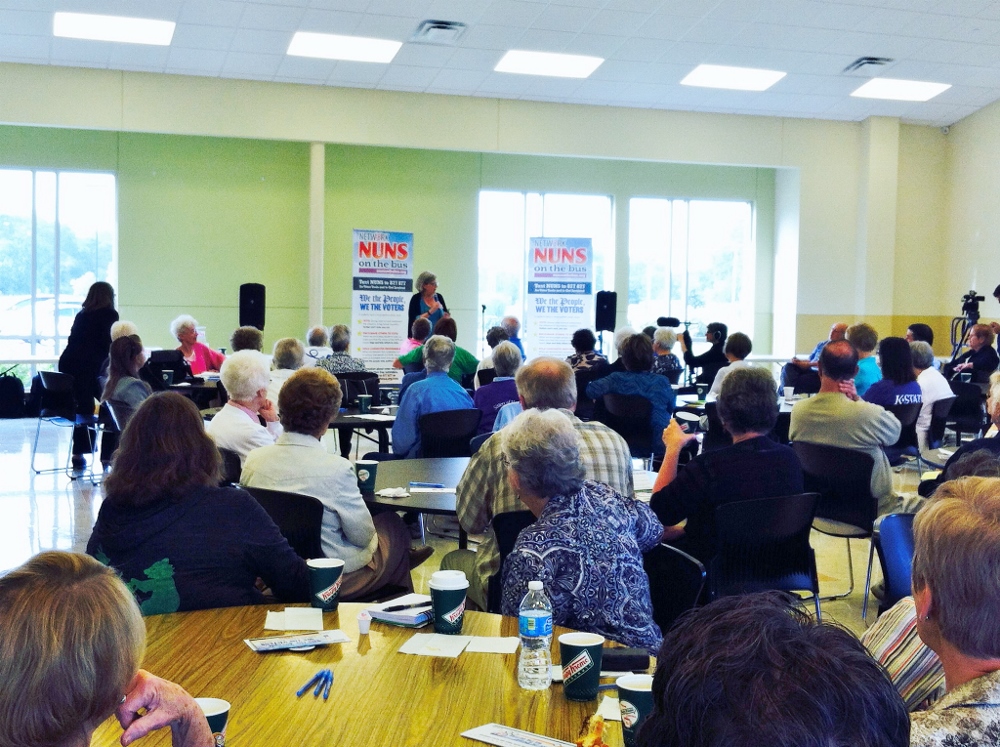 Residents of Council Bluffs, Iowa, gathered at New Horizon Presbyterian Church for a Town Hall for the 100% event hosted Sept. 18 by NETWORK's Nuns on the Bus tour. (Courtesy of NETWORK) 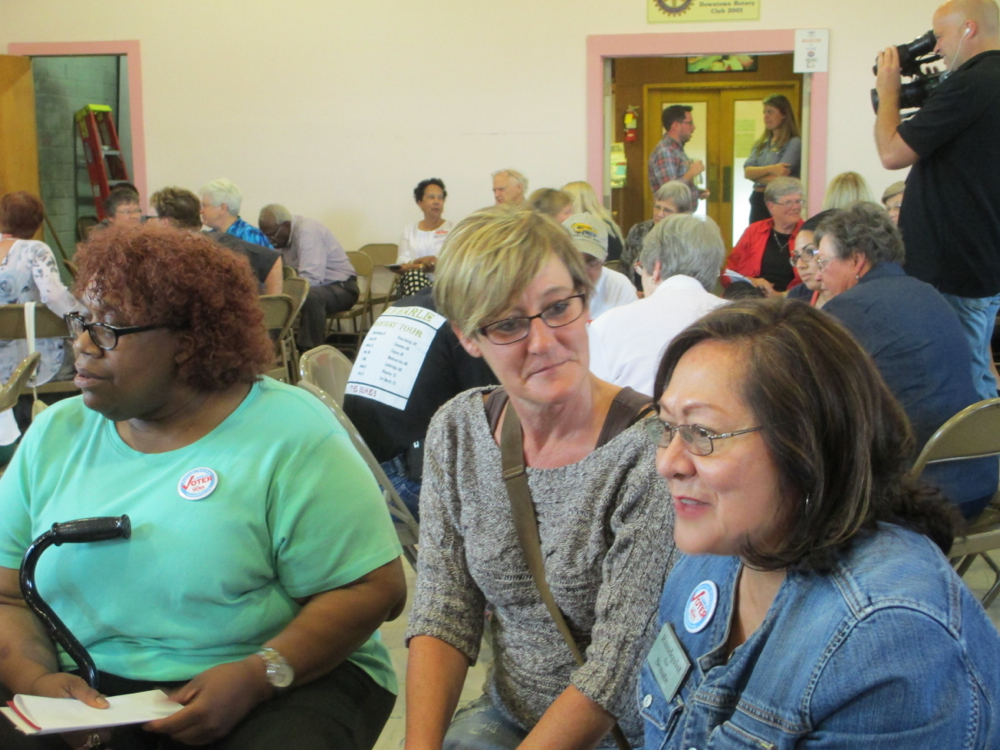 Nuns on the Bus talking to voters who were from several states at the Sioux City, Iowa, Sanford Community Center. (Jan Cebula)

Income inequality. The widening gap. People left out or behind. Fear of the other. Deportation. The pavement has narrowed and leads to fewer places.

Polarization. Not associating with others of differing views. Republicans or Democrats living in separate neighborhoods. A divided highway.

The influence of big money in politics. “Those who have the gold, make the rules . . . to keep the gold.” System of self-preservation. Taken a detour.

Loss of civic education and civic engagement that promotes the common good. Thinking my vote doesn’t count. Not voting. Lost and seeking directions.

Sr. Simone Campbell, emphasizing the importance of community, said there is “road work ahead. We are making a road to the future of our democracy, and there is work to do.”

We already have the tools. Together we can figure out the route. The Town Halls for the 100% showed us that.

An interfaith group from both Iowa and Nebraska gathered in Council Bluffs, including the majority leader of the Iowa Senate. Sioux City’s stop drew a crowd of people of diverse ages and ethnic and economic backgrounds from Iowa, Nebraska, South Dakota and Minnesota. Several state and local elected officials and candidates for office attended. The League of Women Voters were present to register voters.

Everyone at both places yesterday was genuinely concerned about others: a daughter with large student debts, those without adequate health care, those wanting a raise in the minimum wage so people can support themselves, immigrant families being split apart, those wanting to preserve safety net programs, others having enough food to put on the table,   those talking about equal rights, empowering women, environmental destruction, threatened water.

They hold tightly to our cherished U.S. values of justice, equality and the idea of one person=one vote. They know the importance of civic engagement.

They are voters! They are on the bus! They are ready to work to build the road! 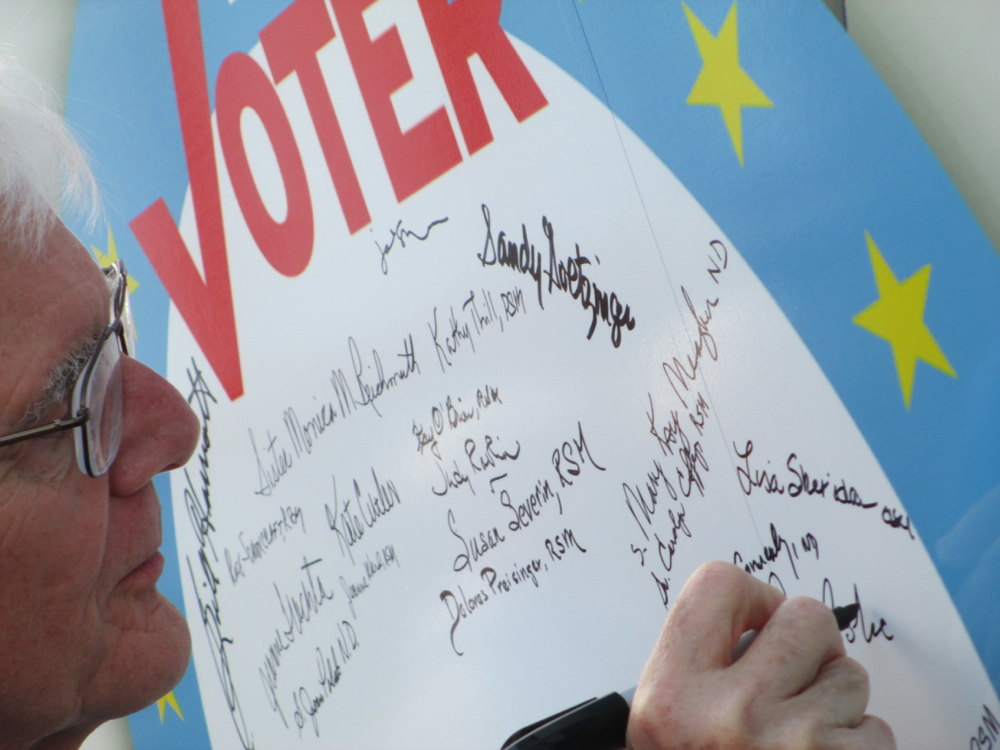 Another person pledges to be a voter by signing the Nuns on the Bus in Council Bluffs, Iowa. (Jan Cebula)

[Sr. Jan Cebula,OSF, is U.S. liaison for Global Sisters Report and a member of the Sisters of St. Francis, Clinton, Iowa.]