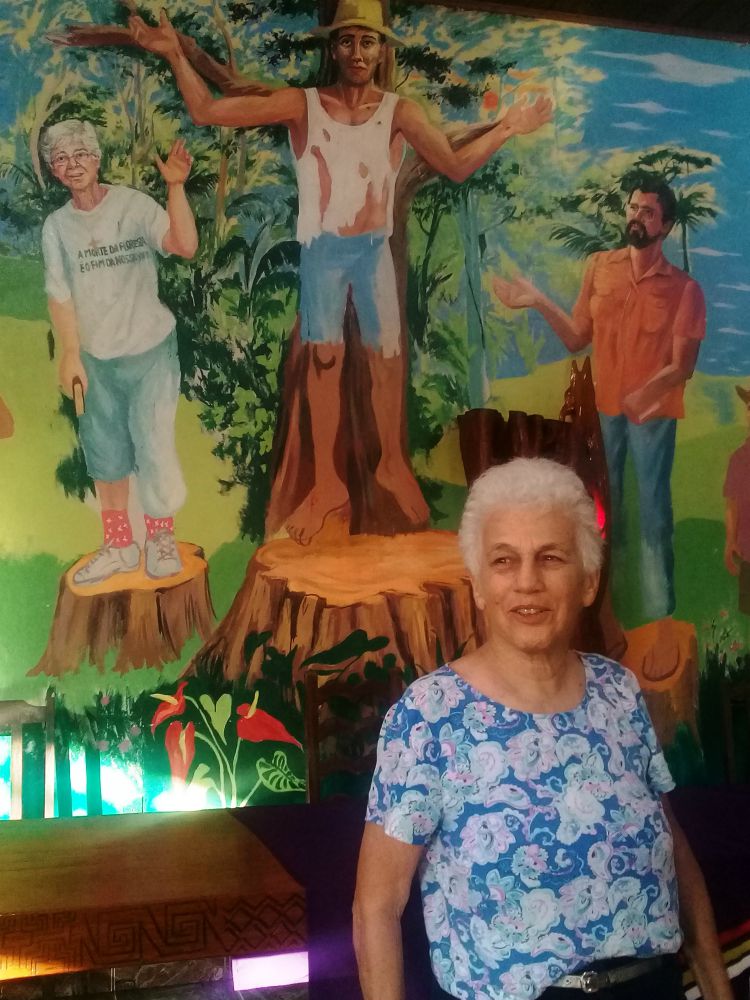 Sr. Jean Bellini of the Sisters of St. Joseph of Rochester, New York

Anapu, Brazil — The eyes of Sr. Jean Bellini of the Sisters of St. Joseph of Rochester, New York, glow as she remembers the political scene of 1976, the year she arrived in Brazil.

"The Medellín Conference in Colombia had happened a little earlier, in 1968. The dioceses that welcomed the proposal from Medellín — a more circular, democratic, participatory church — produced a great amount of material on laws, work, land, and distributed this material to the lower classes in a wide work of popular education," said Bellini, who is now one of the three coordinators of the Comissão Pastoral da Terra (Pastoral Land Commission), or CPT, a Catholic organization that supports peasants and landless people.

"It was a great historical moment for both the church in Brazil and in Latin America," she said.

For being associated to a church close to the people, Bellini was invited to work in the state of Pará in the Brazilian portion of the Amazon basin. In the prelacy of São Félix do Araguaia, created in 1971, during the hardest period of the Brazilian military dictatorship, Bellini joined the group of religious who worked for CPT on a volunteer basis with Bishop Pedro Casaldáliga, who became internationally recognized for his defense of the people of the countryside.

"It was the greatest experience of my pastoral life," she said. "My CPT and religious experience is to be with the communities, to walk and to live with the people, to live together. This is a sense of being a sister."

Today, Bellini is responsible, among other duties, for an annual CPT publication, "Conflicts in the Countryside," and recently coordinated the digitization of 350,000 pages of documents going back to the mid-1970s on the ongoing violence that marks the struggle for control of land in the Brazilian countryside.

Since 1985, when it was first published, "Conflicts in the Countryside" broadcasts the statistics of the types of violence suffered by peasants with and without land in Brazil. The 2018 issue was released in Brasilia, Brazil's capital, on April 16 and includes surprising data, Bellini said: In a year of intense political movements of big landowners and less than two years after the impeachment of former president Dilma Rousseff, deaths in the field fell.

GSR interviewed Bellini in the tiny town of Anapu in the state of Pará in the middle of the Amazon rainforest, one of the most violent regions in the inner Brazil. Less than 24 hours later, Bellini accompanied the third public hearing of the eight controversial criminal charges against Fr. José Amaro.

According to Bellini, the threats to Amaro are similar to the attacks suffered by Sr. Dorothy Stang, a close friend of Amaro's, before the Sister of Notre Dame de Namur was killed in 2005, also in Anapu, at the age of 74.

GSR: What are the highlights of CPT's annual report on rural violence in Brazil?

Bellini: In 2017, there were five massacres in the countryside in Brazil, and most of the 71 murders registered there in that year came from these mass murders. In 2018, the number of murders dropped to 28. However, in the last two years, the number of evictions has increased, and thousands of families were impacted.

What is the current situation in the Brazilian countryside?

We realized that, from 2015, when the parliamentary base of former President Dilma Rousseff began to fall apart, large businesses, which aligned with Rousseff's government, no longer needed to maintain the alliance [between big business and the government]. There was then an outbreak of violence, mainly in the states of Pará and Rondônia, both in the Amazon region.

In our view, when the state assumes its natural role, private power shrinks. But when the state chooses to let it roll, private power comes through violently through the use of hired gunmen. Private security companies have been set up as a kind of façade for hiring the gunmen. The first death case in 2019, for example, involved gunmen and happened in the town of Colniza, in the Amazonian state of Mato Grosso. One person was killed and nine were wounded by security guards on a former state deputy's farm.

But even before that time, governments have developed large economic infrastructure projects in the Brazilian countryside, such as the construction of the Belo Monte hydroelectric plant, very close to Anapu, that heavily impact local communities.

What you are bringing up are the expulsions, evictions and official displacements because of the projects, but there are many types of violence. There has been a dynamic of increasing and decreasing violence, depending on who is the main perpetrator of violence. There are times when it is the state itself, and this is what we fear will happen under the government of President Jair Bolsonaro, which began Jan. 1. At other times, it is private power with their gunmen.

There is also a problem of the Brazilian state that does not allow us to blame one government or another: the inefficiency of public agencies. Here, there are local offices of Incra and Funai, respectively the public agencies of agrarian reform and of protection to indigenous peoples. These agencies have not solved the problems of populations in any part of the Amazon, probably because local superintendents are nominated for political reasons. In Anapu, for example, the idea was to make agrarian reform and organized colonization around the Trans-Amazon Highway, but as the news of the distribution of land spread, many people arrived, and there was spontaneous occupation.

Brazil is a country of continuous coast and a great amount of territory inside the country without infrastructure to get there. So I can understand the logic of the military of other governments in doing these projects. But we disagree on what to do to integrate this territory and on how to assess the socioenvironmental consequences of large projects.

The fact is that when the state withdraws by political choice, violence increases. This coupled with the flexibility of environmental and labor laws as well and mining rules makes it easier for private power to do what it pleases.

What is your expectation about the violence in the countryside with the recent election of a new president?

What Bolsonaro brought as novelty is the attempt to expel the landless camps before they consolidate. He wants to reduce the indigenous areas and does not recognize the Movement of Landless Rural Workers. Bolsonaro says that the people who occupy the land are members of criminal organizations and that he will try to undo settlement areas. This will result in more concentration of land property. He does it without shame. He is the most absurd, the grossest. Now, everything is done openly.

What is the situation of Anapu, a city that has recorded very high rates of violence against rural workers, where Sr. Dorothy Stang was murdered and where Fr. José Amaro, who was one of her companions, now is undergoing a process of criminalization?

Fr. José Amaro has suffered six death threats since Dorothy's murder in 2005 and is now facing legal charges as if he was the criminal. He and the victims of violence are now being accused. The political and economic forces here have decided that it was exhausting to kill Dorothy because she drew a lot of international attention, so they believe they have to do something different with Amaro.

[Carlos Tautz is a journalist based in Rio de Janeiro.]

Environment | Q & A with Sr. Jean Bellini, side by side with landless people in the heart of the Amazon region

A Cry for Life: Trafficking and Brazil

Q & A with Sr. Chantal Desmarais

Q & A with artist Lexa Walsh, who sculpted sisters from her past