Q & A with Sr. Dominica Siegel 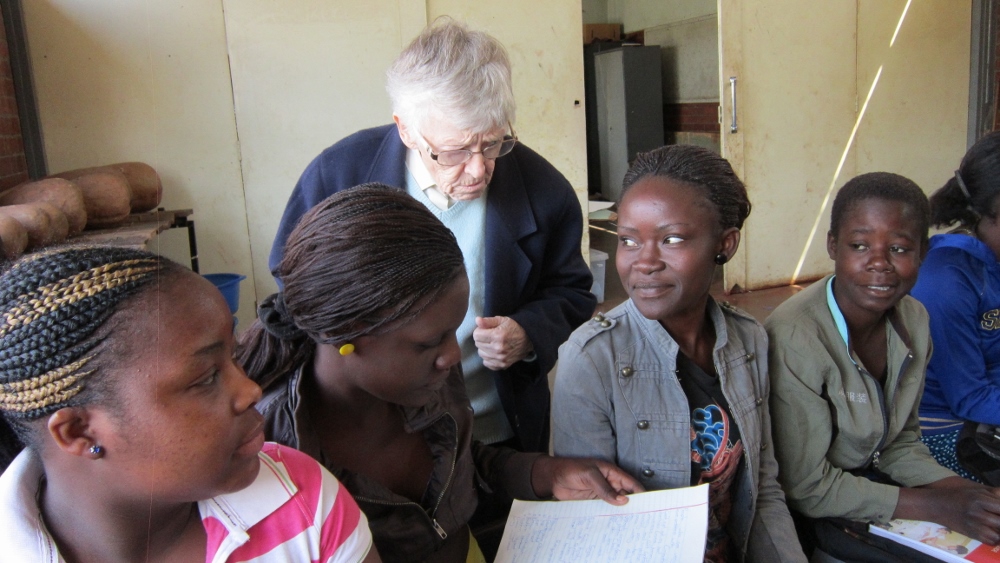 Sr. Dominica Siegel, OP, talks to Home Based Care students about how to use the St. John first aid manual. (Jill Day)

Harare, Zimbabwe — Looking back on 80 years of life that began in Silesia, overrun by the Soviet Red Army in the Second World War, took her to war-torn West Germany and then to Rhodesia (Zimbabwe), a country itself embroiled in a civil war shortly after she arrived and now in a state of negative peace, Sr. Dominica Siegel, OP, quoted French poet and philosopher Paul Claudel: “God can write straight on crooked lines.”

A lifetime of teaching reached a pinnacle in the 1980s when she helped Dr. Dzingai Mutumbuka, minister of education in newly independent Zimbabwe, develop various programs that resulted in free primary school education for all. 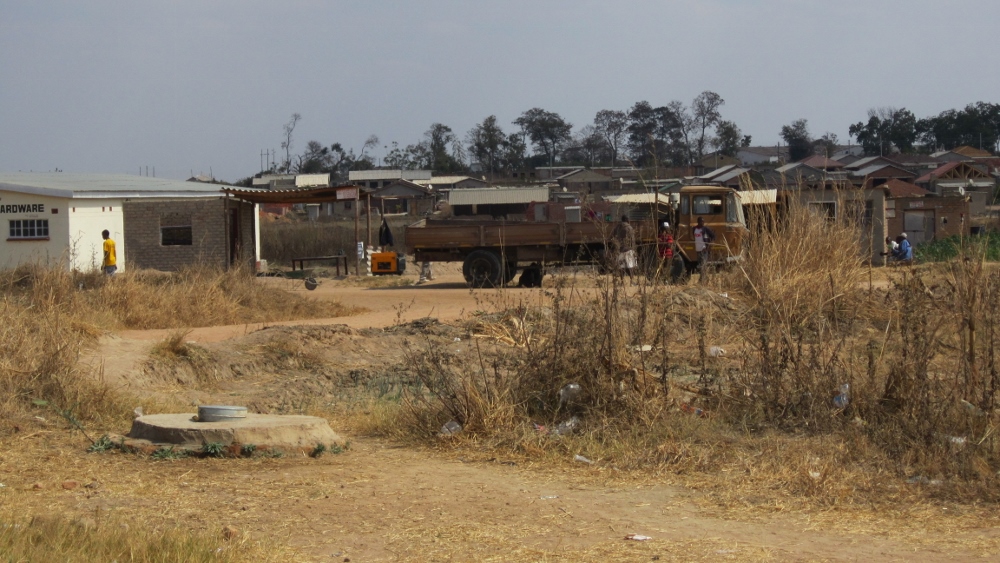 What drew you to teaching?

We escaped to Berlin 1945 and were told to return to East Germany – but my father knew what would happen to us there so we managed to go to the Lower Rhine where I trained as a primary school teacher.

I joined the Dominican Sisters in 1957 in London and was sent to Salisbury [Harare] for an unhappy year. I was cheeky even then: I told the convent they made all this propaganda about educating Africans, and there I was, teaching white children just as I would have been doing in Germany.

They moved me to a primary school at Chishawasha Mission 20 miles away. It was near: just in case . . . . Yes, I was happy there – and the children were black.

In 1962 I was sent to Masami Mission, 36 miles north east of Harare where I spent seven years before going to Makumbi Mission, 31 miles north, where I taught mathematics for a year before being appointed headmistress.

Government controlled the size of the school – we had 250 students – but oh, the applications . . . . My mother was staying with me one year and she was equally heartbroken each time we had to turn away some little kid who arrived on foot desperate for a place. 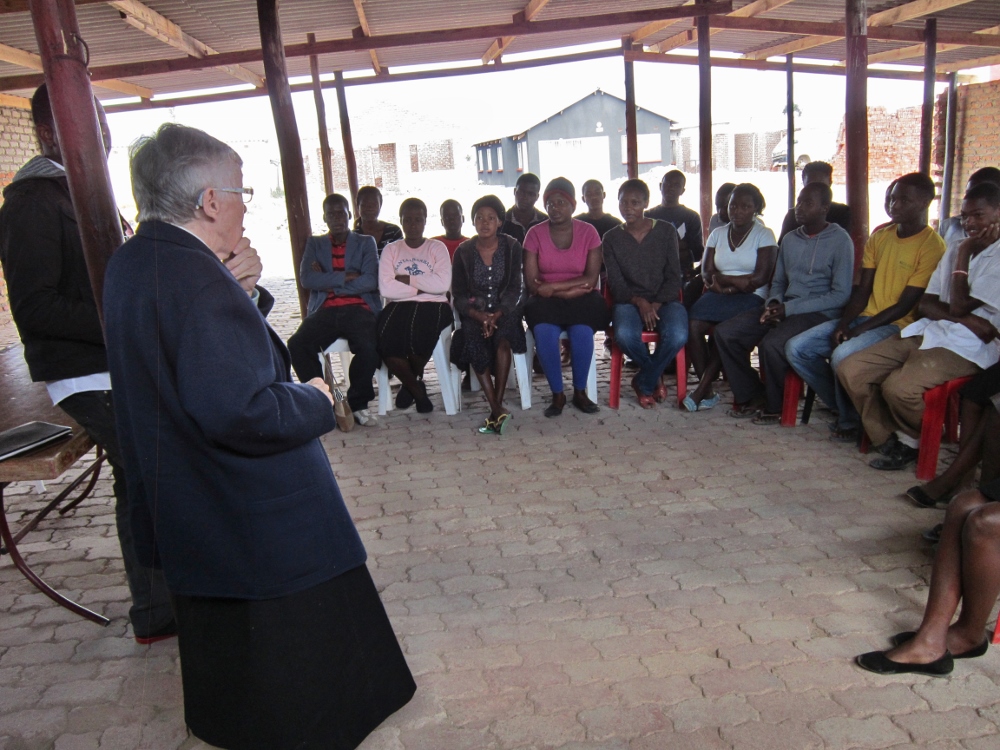 Sr. Dominica Siegel encourages Child Headed Household Home Based Care graduates to use their newly learned skills to help first their families and then the larger community in Southey Park, one of the newest and poorest squatter camps in Harare. Weekly courses are being held in the half-built Methodist church. (Jill Day)

I tried to be particular about how the boys treated girls, who are often disrespected in local culture. And I may have abolished some rules. If you can’t enforce them, they make you look ridiculous.

I went back to Musami in 1975 and left at the end of the next year because I won a scholarship to study a master’s in philosophy at the University of Zimbabwe. I was not there when guerillas shot seven Catholic missionaries in one of the worst atrocities of the civil war.

I was sent back to Musami after this and there were some terrifying moments. We were dead scared – we are only human! After two years we were recalled – I never found out why.

What did you do next?

I completed my degree and then chose to help education in this country. Together with Dr. [Brenda] Black, we developed a program to train about 100 district education officers from all over the country. It took about a term. 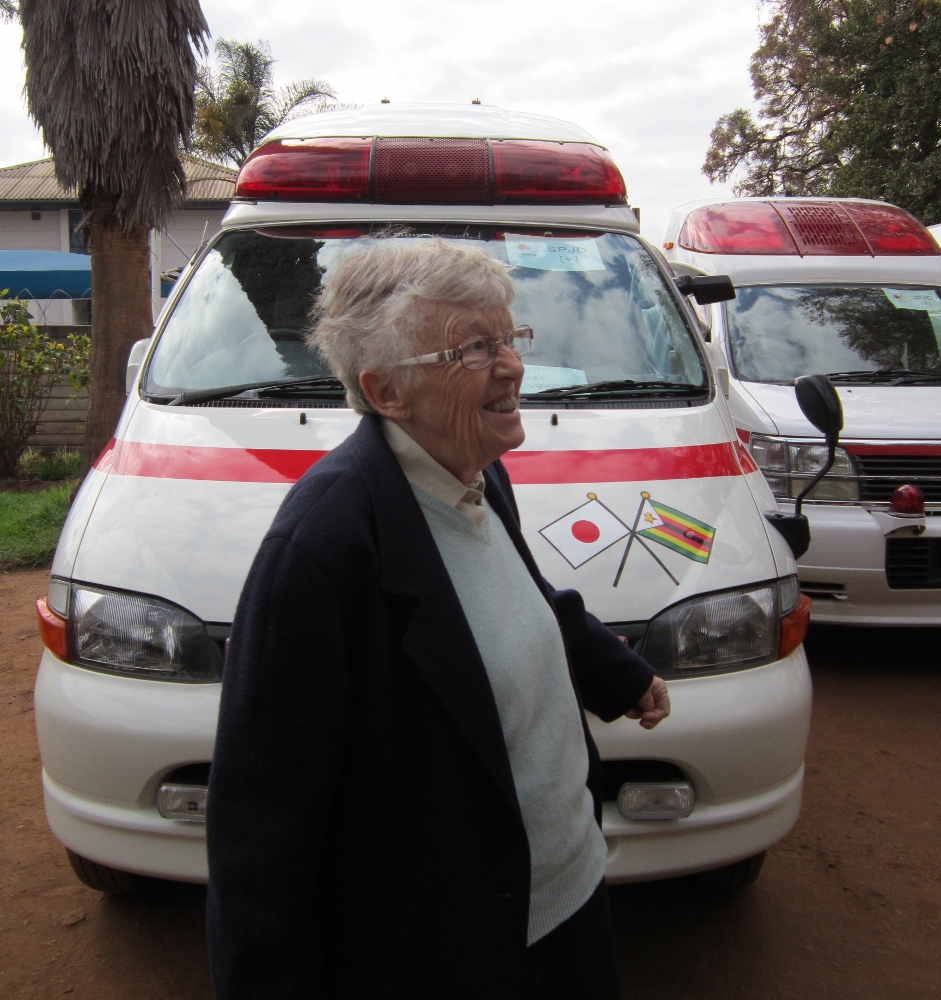 Now I was a civil servant, and we were asked to work on an accelerated teacher-training program. We designed a primary school, one that resulted in the fastest growth in education of any African country and led to 93 percent of Zimbabweans being literate.

We set up five teacher training colleges in the main centers, developed syllabi for them and found lecturers so that we could meet the education needs of all Zimbabweans.

Dzingai was pleased with this and asked me to become the director of the accelerated program, but I said no; it wasn’t the time to have a white nun running education, so he took me into his office as his personal assistant.

He asked me to find teachers from outside Zimbabwe to work in rural secondary schools. I started contacting the superiors of the main religious bodies worldwide. Over the 10 years I ran it, 230 teachers came to Zimbabwe.

They had to be graduates and they had to agree to come for two years, not just one for tourism and foreign travel. Also they had to forfeit their salary and live on an allowance.

How far did your education reach?

It was like working with a whirlwind – Dzingai is intelligent, a great believer in education before party politics. He gained the trust of most developed nations, so aid for education flowed in and we did achieve free primary education for all Zimbabwe’s children for a short spell.

Yes, it was an achievement – but we didn’t consolidate it. Look what has happened to education in this country. Less than half the population now goes to secondary school and primary school attendance is 82 percent.

What are you doing now?

I run the Child Headed Household Home Based Care courses for St. John Ambulance. It teaches vulnerable children between 14 and 21 how to care for people who are ill and how to cope when a member of the family dies. Often they then find work as nurse aides.

The courses are free, but each one costs $1,000 and money an on-going struggle. We have enough to see us through to the end of the year – but we want to spread our wings and run courses in rural areas and other centers. 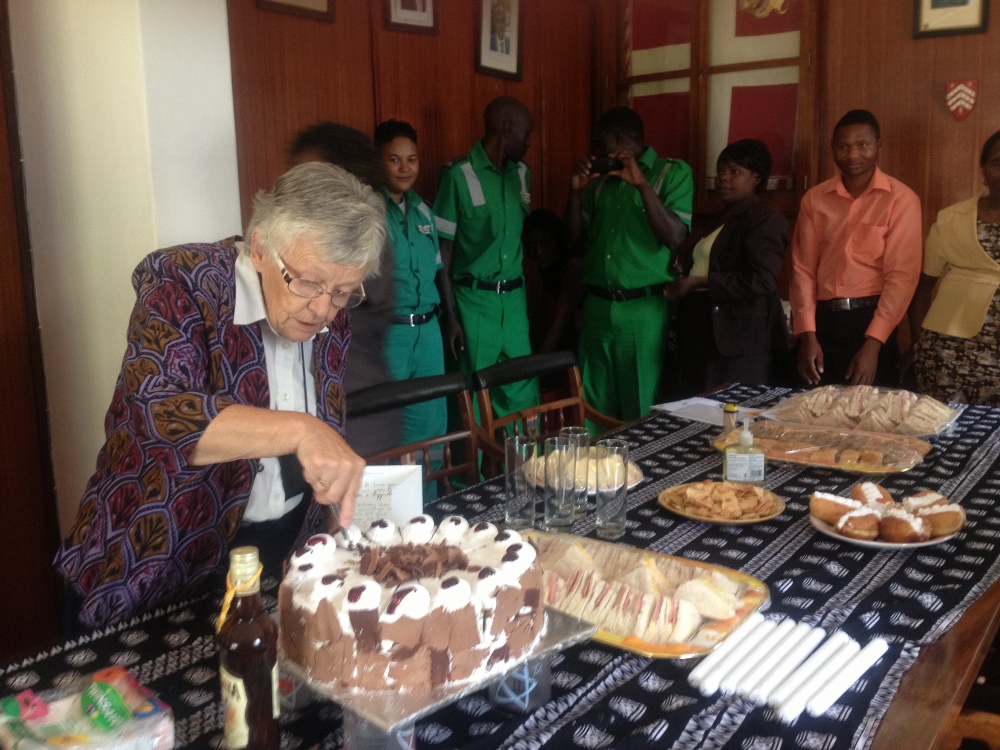 Sr. Dominica Seigel cuts her cake at a surprise party organized by her colleagues at St. John Ambulance for her 80th birthday. In a country where everyone has a nickname, she is known as “Sister Ferocity." (Jill Day)

[Jill Day is a contributing writer and editor for GSR based in Harare, Zimbabwe.]

Q & A with Sr. Gracy Vadakara, a promoter of interreligious dialogue