Ratchaburi, Thailand — Thailand is an exotic country of royal pageantry and the influence of Buddhism. It is a land of smiles and friendliness. But, as in most places, there are shadows, too. Thailand is one of the most prominent "sending" countries for sex traffickers.

My first visit to Thailand was to Pattaya, a coastal city southeast of Bangkok where the Good Shepherd Sisters have a center that welcomes women who are "working" girls. Families often ignore what their daughters really do when they set out to find work to help their families. Poverty and girls' responsibility for their parents are the driving forces for most of them.

Thailand is also surrounded by other countries struggling with poverty and violence. The most significant is Burma, now known as Myanmar. The government of Myanmar has been accused of persecuting and attempting to wipe out the Karen people, many of whom fled to Thailand. These families landed in refugee camps along the borders.

Sr. Cecilia Suwannee Phetpanomporn, a Thai Chinese Sister of the Presentation from the Australian Society, began working with refugees in 2001 as a volunteer and now is full-time with the Catholic Office for Emergency Relief and Refugees (COERR). Thanks to Skype, I was able to hear Phetpanomporn's unusual story.

GSR: Cecilia, how did you get involved in refugee work?

Phetpanomporn: My journey took many paths. I entered the congregation in Perth at age 27. [A priest, Fr. Peter Likitham, had introduced her to a Sister of the Presentation of the Blessed Virgin Mary from Australia working in Thailand.]

While in formation, I attended university, but found the language too difficult, so I dropped out. I had only learned English when I entered the convent.

My first ministry was at one of our boarding schools at Iona [Presentation College in Mosman Park, Western Australia]. From there, I was sent to Geraldton, where I taught home economics and worked with boarding students. After a few years, I was sent to the Philippines to study counseling, and when I returned to Perth, I did pastoral work with Philippine immigrants.

My longtime dream to return to Thailand finally came to pass. My companion, Sr. Petra Likittam, and I were missioned to our home country together. We lived with one of our Australian sisters, Sr. Monica Maddox, who had been teaching English to seminarians. I taught and after school did pastoral care for the young students. Later, I got involved in pastoral work in a detention center in Bangkok. I worked with people from all over the world who had overstayed their visas. My facility with Thai, Chinese and English helped me very much. 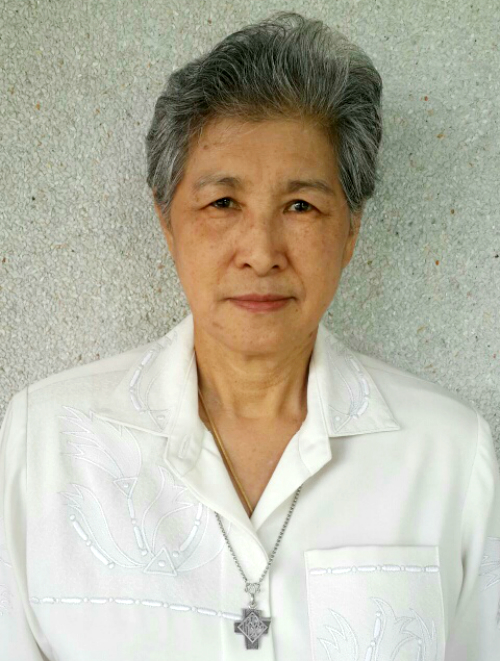 At the same time, I began working with the Karen refugees from Burma with COERR. Sister Gabriel, my superior in Australia, offered me the chance to go to Ireland for my sabbatical year, and in the program I had a chance to be part of peace and reconciliation training.

It was a perfect fit for me and led me to full-time ministry at the border to work with Karen refugees. I worked in camps in the north and the south. I have been a field director of COERR of the Ratchaburi diocese for 15 years and work with a translator who knows the Karen language. I also trained COERR staff and the refugees in peace and reconciliation. This helped them overcome grief and sadness.

It is a hard place to be. Most families have run away from Burma because of persecution by the military government. Soldiers would come and burn down villages, and people had to run into the mountains and jungle. When the refugees first came to Thailand, the camps were run by the Thai government, the United Nations and a variety of [nongovernmental organizations], including COERR. In recent years, Caritas Denmark decided to leave the project.

Now, with fewer resources and a somewhat better situation in Myanmar, there is a move to close the camps and have people return. The problem is that many of the younger people were born in the camps, and Myanmar is not their home.

Women and elderly suffer the most, along with the sick and those with handicaps. Women are vulnerable to attacks, and elderly, those with handicaps and the sick often have no one to care for them. There isn't enough food now that the aid has decreased. People try to grow a few vegetables or find ways to get money to buy food. A few escape from the camps, hoping to make their own way. Some have been able to migrate overseas, but they need to show that they were registered with the U.N. before they can be considered for emigration. Unfortunately, many came after that initial registration closed and so have no papers. They do not belong anywhere.

They are trapped into staying in the camps? How did they find the strength to cope with the situation?

Yes, they feel trapped, and there is no way to make a living here. Many were depressed. But the majority have faith that helps them survive. About 60 percent are Christians, mostly Baptists and Anglicans; 20 percent are Catholic, 10 percent Buddhist and 10 percent Muslim. All of them carry on their religious practices as best they can.

Has it been dangerous for you to work in the camps?

Yes. Being close to Burma, we experienced effects of bombings at the nearby borders. When we traveled from one camp to another, we had only mud mountain roads, and in the rainy season, the roads sometimes disappeared. It was a 20-hour drive from Ratchaburi up to Mae Hong Son. We had many scary times and did a lot of walking, especially during the rainy seasons. Crossing rivers was really dangerous. Usually, local men would help us aid workers cross so we would not get washed away.

Sleeping in the camps at night was not fun, either. We had no lights, only candles after 8 p.m., to get from one place to another, including the toilets.

What keeps you inspired to do this hard ministry?

Our foundress, Nano Nagle, an Irish woman in the 1700s, had similar experiences in the slums of Cork. I really identify with what she experienced. People were smelly, lived in uncomfortable conditions, had no education or even hope of it. She made them feel respectable and worthwhile. That is what I try to do here with the Karen. Of course, my prayer life and the mystery of being called by God also keep me going. I have a deep sense of the Holy Spirit guiding me. God chose me, and I trust him.

Tell me about your life before becoming a sister and what moved you to choose this life.

I am from a Chinese family and as a girl was a Buddhist, like my mother. She sent me to a Catholic school across from where we lived, and I had a chance to go to church.

I was very inspired by the priest. He helped people in need, and it didn't matter who they were or what religion they were. I was drawn to him and the Catholic faith. I learned about prayer and the life of Jesus.

My mum needed to be convinced to let me be baptized. It was not easy for her. But she saw how much I wanted it, begging and crying when she resisted. After three years, I was baptized and then moved to Bangkok to finish school before I moved with my grandma, dad and my two brothers in Nong Khai.

In Nong Khai, I ran a small business of roasting coffee beans for some years, then moved with my family to Udonthani, where we opened Bangkok Kanggaloo Super Market. I worked there as the manager until I left to enter the convent. My family did not expect me to stay.

I had been convinced of a religious life by the priest. One incident was important and stands out in my mind. There was an old lady who was carrying one egg to give to the priest. I was struck by her generosity. When I found out that the priest did not take it, I asked why not. He said it was the only meal she had. I was speechless, so even though I was not intending to go to church that day, the priest, Father Boonthai, kept asking me to come. He said to me, "You know, God might want all of you." When I asked what he meant, he said God might want me to be a nun. I said no, but his words stayed with me, so I started thinking about it and later said yes, I would go.

Another time, I heard about the Presentation of the Blessed Virgin Mary in the temple from a Presentation sister who was a friend of the priest. I fell in love with Nano Nagle, who founded our congregation. I wanted to be like her, to help people in need, especially the poor and lonely. So I decided to join. It is the love of God that inspired and makes me who I am. I now dance his song.