When Sr. Denise LaRock heard of Hurricane Harvey's potential threats to southern Texas, she worried the impending disaster would cause problems for asylum-seekers in San Antonio.

LaRock, a Daughter of Charity of St. Vincent de Paul, has been working in San Antonio since January 2016. She works with the Interfaith Welcome Coalition, which greets asylum-seekers at the bus station and provides backpacks with donations from churches.

"They get a little blanket, snacks, a notebook," she said. "Volunteers provide some food for the trip. We explain the buses and tickets and how to wait. They are still vulnerable to being trafficked when they don't know the language and how the bus works."

She was right to be concerned as the hurricane approached. Greyhound canceled bus service Aug. 24 because of the weather reports, and about 50 immigrants were stranded the next day at the downtown station. Immigration authorities had released the women and children from family detention centers, and they were supposed to be on their way to their families and sponsors. Most had no money and little food.

After finding the migrants were stranded, LaRock helped contact city officials and nonprofit organizations. A local church that already had opened its doors to homeless people ahead of Hurricane Harvey agreed to shelter the immigrants, as well.

The crisis was resolved quickly, but Human Rights Watch heard about it. The international nongovernmental organization created a 58-second video in which LaRock discusses the bus station mix-up and the responsibility people of faith have to help immigrants.

"It upsets me when people of faith are against the immigrants," LaRock says in the video posted on social media. "They live in great danger, and we need to acknowledge that and reach out to them."

GSR: How did this crisis start?

LaRock: The bad weather hadn't started yet. Greyhound started the day before to cancel some buses in anticipation of the bad weather. There was some misinformation and tickets were bought even though the buses were not running. The people were distressed that they couldn't move on with their journeys, but I think once they got information about the hurricane and the danger, they understood the situation better.

How did they come to realize they were stranded?

We had to tell them. They were very sad and concerned. We reassured them they would not be stuck at the bus station. We'd work something out.

So what did you do?

Staff from the city was at the bus station within a half-hour of being contacted. Within an hour, the families had left the bus station and were at a shelter at Travis Park United Methodist Church, which is just around the corner. Another part of their church was being used as a shelter for the homeless. They quickly and generously opened up the church. The city provided cots, and a lot of organizations came together to help. Greyhound was very good about letting us know when buses were running again.

I wasn't there. We had a couple rainy days. Other than some strong gusts of wind, you would not have realized it was a hurricane. But you couldn't travel because it was so bad in other places.

How long were they at the shelter?

Tell me how the Human Rights Watch video came about.

Charlotte-Anne Lucas of the online site NOWCastSA came down while the families were at the station and got footage. Then some other articles came out, and Human Rights Watch got in touch. It's my 15 minutes of fame. It has been very positive because it shares the needs of the immigrant community and our duty as members of the faith community to respond to that. Even some of my former students have shared it and commented.

Who are the people who got stranded?

They were asylum-seekers who had been at the family detention center. Most are from Central America. Some who cross through Mexico are from African countries or Romania. Once they cross, over a bridge or over a river without permission, they get held in a detention center. It's a dormitory. Instead of walls, there's fencing. They are usually there about two weeks or up to 20 days.

What happens at the detention center?

While they're there, the families have a "credible fear" interview. If they fail the interview, they are deported. If they pass, they are released to sponsors in the United States. The people I see are ones who have sponsors who bought them bus tickets to travel to their sponsors. The Interfaith Welcome Coalition does outreach at the bus station. We're working on getting it started for the airport.

What is a "credible fear" interview?

It's an interview in which they express why they are afraid to return to their country. Even after they pass this interview, it doesn't mean they can stay. It means they are eligible to go to court. Once they are released, they will receive at some point a day to go to court. It takes between one and three years to go to court. At that point, the judge decides if they are to be deported or receive asylum.

Why such a long wait?

There's just a backlog. They have been trying to get more immigration judges. The situation is so bad in Guatemala, El Salvador and Honduras, they want to leave.

What can you say about the people you work with?

Most of the families are very happy to be going to their sponsors. Traveling and not speaking the language is scary. A lot of the children experience trauma from the violence in their country and from being hungry on the trip through Mexico. Part of our concern is they won't have enough to eat on the way to their sponsors. The bus trips are often two or three days.

Do you feel any danger in your work?

No. But I'm very conscious of the danger they're in.

What did you and the interfaith group learn from the bus station mix-up?

There has been a lot more communication from ICE about their travel plans to the bus and airport. Our organization knows who in the city to contact right away in case of another emergency. We have contacts with ICE now to make sure communication is clear.

What do you wish people knew about people seeking asylum in the United States?

So many people hear about immigrants coming as statistical data and not as real people living in danger. They don't hear the stories of the moms whose husbands were killed because they didn't have the money to pay for the extortion fees for the gangs. Or why they decided to take off from their country one afternoon because their son was being pressured to join a gang. Or their daughter was threatened to be killed if she did not service the gangs.

There is so much danger. I know people in the United States are concerned about their own jobs and their own well-being. If they understood the fear and the danger these people face, I think they'd be a lot more compassionate.

How do we get past seeing people as statistics or pieces of a policy debate on immigration?

We have to hear the stories to understand what they're going though. People don't understand the risks these families take just to get to the United States. About 80 percent of the girls and women have been raped on the way. Often, it's a gang rape. A number of the women get the birth control shot in anticipation of being raped on the way. Things are so bad in their country they are willing to risk their own rape on the way to get their kids to safety.

Most of them are robbed along the way. Sometimes there are stash houses, where people who are supposed to be helping them cross the border are holding them for ransom.

How do you deal with these stories?

The thing that helps me is in the bus station, things are so busy when we're trying to get them prepared for their trip to their sponsor. Their excitement in getting to their family becomes the predominant emotion. It's helpful knowing we can bring relief to them in this moment in the journey.

One of the biggest challenges for me is I can't say, "Everything is going to be OK now." A lot of them will be deported.

[Renée K. Gadoua is a freelance writer and editor in Syracuse, New York. Follow her on Twitter: @reneekgadoua.] 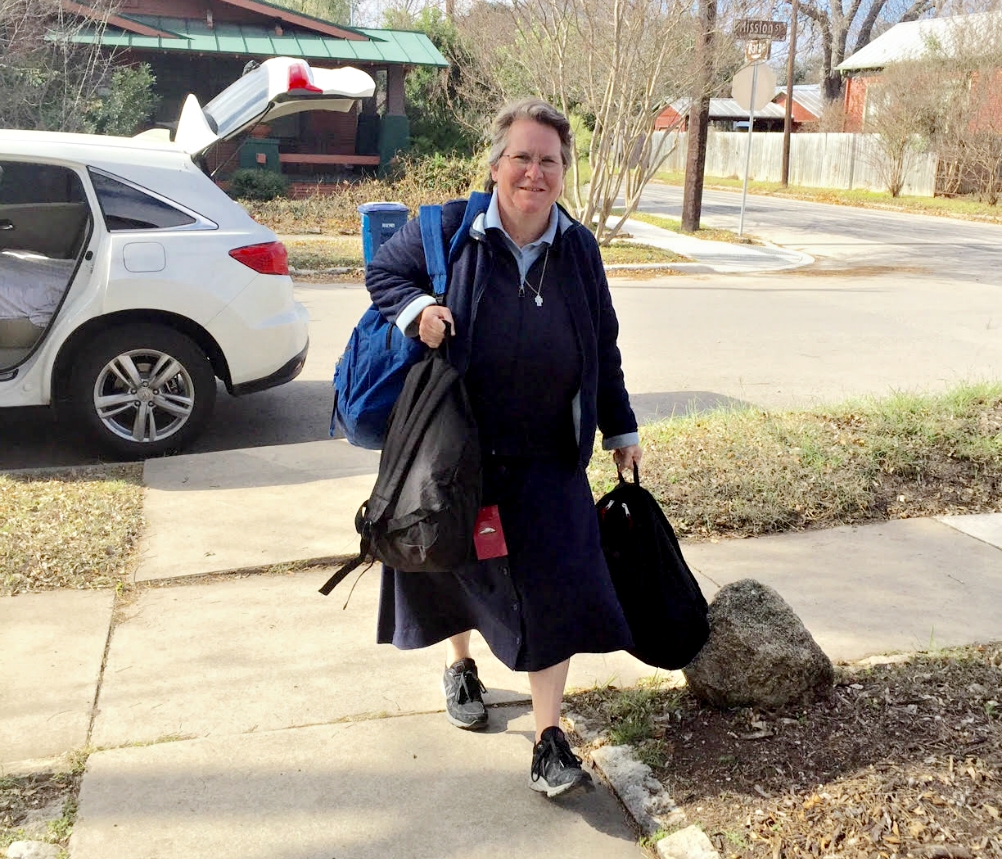