In a federal courtroom, Sr. Janice Vanderneck squeezed her rosary beads, praying for a miracle: Martin Esquivel Hernandez's release from prison so he could be reunited with his wife and three young children. Esquivel was charged with a felony for re-entering the United States from Mexico, which he and his family left to escape drug violence.

Vanderneck has been a leading figure in this high-profile immigration case. She's led prayer services and candlelight vigils for Esquivel and others who are trying to keep their families together.

There was no miraculous prison release for Esquivel that day, yet Vanderneck considered it a miracle that a big crowd of demonstrators stood outside the courthouse in the cold speaking up for Esquivel, and that, weeks later, the charge against Esquivel was reduced to a misdemeanor.

Vanderneck's life work is helping Latino families. She is a member of the Sisters of St. Joseph of Baden, Pennsylvania,  and is founding director of Casa San Jose, a small Pittsburgh organization that "advocates for and empowers Latinos by promoting integration and self-sufficiency," according to its mission statement online.

In an interview with Global Sisters Report, Vanderneck described how her journey began and her concerns for the future.

GSR: What drew you to serving Latino communities?

I got my master's degree in theology and had my first opportunity to actually go as a missionary to South America. The liberation theologians were very active in Brazil — Brazil was the country I went to as a missionary. Of course, there, Portuguese is the language. But I was very, very influenced by liberation theology and the social mission of the church, the social encyclicals. That was the process of me really loving working with Latino people.

Could you share some anecdotes of some of the work of Casa San Jose, like some of the people who have been helped there?

Just yesterday, I went with a man to PennDOT [Pennsylvania Department of Transportation]. He passed his [driver's license] test. It was the second or third time he tried for it, but he did well on the English, and he did well on the test. That's one of the real, terrific things to witness is somebody getting in there, being able to get their driver's license, being able to get their green card — certainly, it is a wonderful day. Seeing these youth who qualify for Deferred Action for Childhood Arrivals, and them being able to go to college or any kind of trade school, get a job, using a Social Security number. All those things are really exciting, exciting steps forward. They don't happen every day, but on the rare occasion when they do happen, it's very exciting.

President-elect Donald Trump has said he will deport millions of undocumented immigrants. How has this impacted your work?

Since the president-elect was named on November 9, our folks have been coming to us with fear and anxiety. Reports of ICE, that's Immigration and Customs Enforcement, having stopped them in some cases, taken — well, we've heard about five persons that have been taken by ICE recently.

There's real fear. Children have a lot of anxiety that Mom or Dad will be taken from them or they'll be separated from Mom and Dad or aunts or uncles. Sometimes, kids in school tend to be mean and bullying and say, 'You're going to have to go back to Mexico.' They're saying this to some kids who were born here, or they're saying, 'We're going to have a wall to keep you Mexicans out.' Things like that, bullying things, which I guess they're doing with Muslim kids, also. They are sort of emboldened by the rhetoric that they heard from the president-elect himself.

Almost immediately, we got offers from immigration lawyers to provide free-of-charge clinic information sessions for the people to give them accurate information and some assistance as far as possible. Also, we have volunteer therapists who have expressed willingness to work with either support groups or to speak with groups of parents and talk to them about how to speak to your child about fear or how to help your child manage the anxiety that is in them.

I assume that there have been times over the years you've been confronted personally by people in our church or our world who question whether you should be doing this, who question whether the people you serve should rightfully be working or living in the U.S.. How do you respond?

I don't have to go far to find the teaching of the Catholic church on the issue. I am a member of the Justice for Immigrants Campaign of the United States Conference of Catholic Bishops. I just think our Scripture is the best guide. We share the same Scripture with our Jewish brethren, that we once were aliens ourselves in a strange land, in a foreign land, and we should welcome others as we were welcomed.

I just think it's our faith tradition that teaches us to welcome our neighbor. I know the kinds of conditions people live in in Latin America, the poor, from having been there. It's just dire. It's just excruciating poverty. If people come here with not only poverty but fear of violent gangs, or drug rings, or military police, and they look to us for a place to have a safe haven, I think we are the greatest country on the Earth, and I think that we certainly can open our doors.

What spiritual resources or practices do you rely on to aid you, to keep you going in your work?

Every day in the morning, the first thing I do is use my prayer resources, which are the one from the Irish Jesuit priests called Sacred Space. Then the other one — it's called Give Us This Day [Daily Prayer for Today's Catholic].

I use both of those, and I sit quietly and just really listen to what Jesus says in the Gospel about those of us that are called to follow him and what he expects of us and what he himself modeled for us, as well as the Old Testament prophets. I think I take great, great meaning from that morning time spent with Scripture.

My Sunday Mass with the Spanish-speaking community is also a very, very important sense of faith community for me. I really love attending that, and I sing with the choir with that Mass.

How have you seen the Holy Spirit at work in your ministry?

The leadership team of the congregation [of St. Joseph sisters] asked me to do this thing, this Casa San Jose thing, which, of course, then we didn't have the name for it. I didn't really want to, and I said to them, 'How am I ever going to form a nonprofit and get the money to run it?'

I found this church — it's not a Catholic church, it's a Lutheran church that was willing to give free space and had fabulous workers. Soon, we got a grant to pay for the workers. We've gotten lots and lots of grants, lots and lots of recognition.

It's all by the providence and the guidance of the Holy Spirit. Just trusting that I can take that one next step and be surrounded with great support from the leadership team of the Sisters of St. Joseph and sisters themselves, to our board members that provide the framework for support for Casa San Jose, to our supporters, our volunteers, our donors. It's very, very much the work of the Holy Spirit.

[Jennifer Szweda Jordan is a writer and producer based in Pittsburgh, Pennsylvania. She started Standup Sisters, in which Catholic sisters share personal stories about their lives and work on stage and in podcasts.] 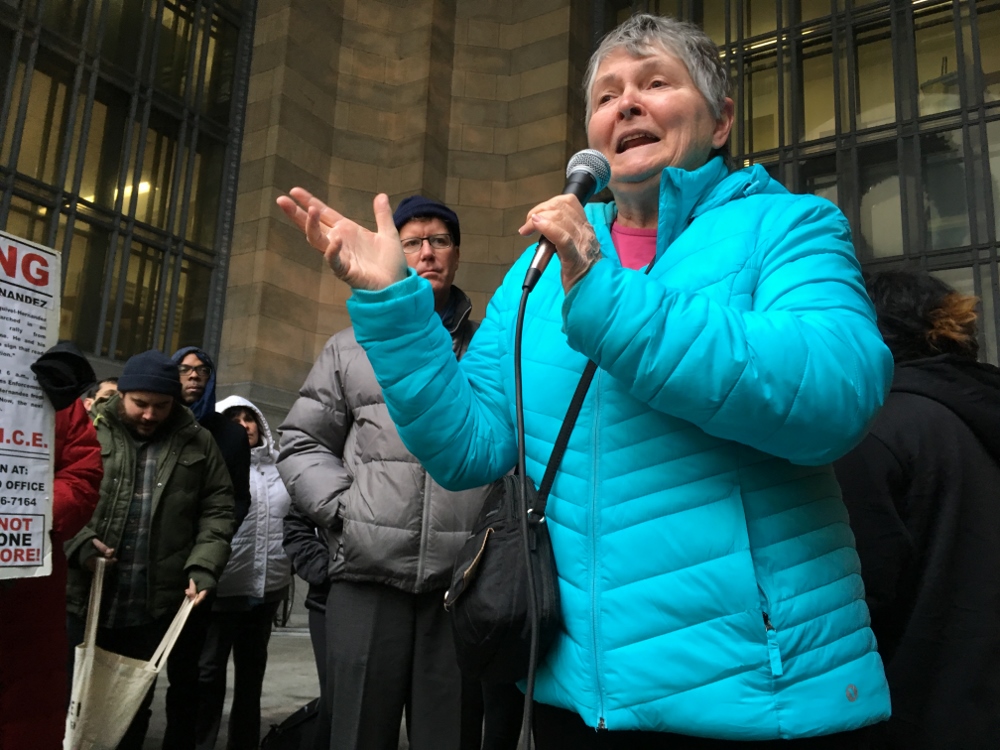